Top 10 golf courses in and around Aberdeen

Golf is a hugely popular sport in Scotland, attracting visitors from all around the world to play at some of the country’s 550 unique golf courses. Scotland is renowned as being the home of golf with the oldest golf course in the world being found at St Andrews Links – which dates back to 1552.

In the second World War, a German aircraft dropped a bomb on Stonehaven golf course leaving behind a large crater (now known as ‘Hitler’s bunker’) between the first and second fairways.

Aberdeen and Aberdeenshire are scattered with fifty-five golf courses – enough to play at least one new course every week of the year! As you are spoilt for choice, we have compiled a list of our top ten recommendations you must play when visiting Aberdeen.

Did you know: that Aberdeenshire is home to two of the top ten oldest golf clubs in the world.

The Balgownie course is famous for being the sixth oldest golf course in the world! Located in Bridge of Don, this traditional links course is a quick ten-minute drive from the NorthLink Ferry Terminal.

Founded in 1780, the club was originally called the society of golfers at Aberdeen but was renamed to Aberdeen Golf Club thirty-five years later in 1815. With a par of 72 and stretching over 6,500 yards, the Balgownie course is a true test for golfers of all abilities with no two holes playing the same and the often-challenging North Sea wind to contend with. The front nine holes are highly ranked as being some of the finest in the world.

Famed golf competitions have been hosted here throughout the course’s history and they have welcomed some of the world’s best professional golfers – including Rory McIlroy who currently holds the course record with 64.

Newmachar Golf Club was founded in 1990 and is home to two stunning eighteen-hole courses – the Hawkshill Championship Course and Swailend – both of which are a par 72 and are approximately 6,500 yards each.

Swailend is much more suitable for inexperienced players in comparison to the Hawkshill Championship Couse, which is notably more difficult – featuring water obstacles on numerous holes.

Newmachar Golf Club is famous for being one of the leading golf facilities in Scotland. Here you can find a wide variety of top-class practice areas including an indoor and outdoor driving range, a simulator room and a putting green.

This course is only a twenty-five-minute drive from the NorthLink Ferries Terminal and is definitely worth a visit.

Cruden Bay Golf Club is another popular links course based against the beautiful backdrop of the North Sea whilst weaving throughout towering sand dunes. Located in Cruden Bay – a forty-minute drive from the NorthLink Ferries Terminal – this course claims to be the best links course in Scotland!

Cruden Bay Golf Club was founded back in 1791 where evidence has been found documenting a nine-hole course. However, the new and unique course we know and love today was commissioned in 1894.

With a par of 70 and a total length over 6,000 yards, this course truly showcases some of the best golf that Scotland has to offer. Don’t be fooled though – this course is notorious for being tough even for well-experienced players.

Fascinating fact: In the distance, see if you can spot the famous ruins of Slain’s Castle – said to have inspired Bram Stoker’s famous novel Dracula.

Located an hour’s drive away from the NorthLink Ferries Terminal, Aboyne Golf Club is a must-visit if you are in the area. Founded in 1883, it is the oldest club on the Royal Deeside and the meticulously maintained course stretches across 6,000 yards with a par of 68.

This golf club is famously described as ‘a course of two halves’ with the front nine acting to gently ease the player in – whereas with the back nine, you are quickly confronted by more challenging and tricky obstacles to overcome.

Afterwards, why don’t you reward your efforts by grabbing a bite to eat at their Clubhouse, which has a beautiful panoramic view of the golf course and is open daily.

Murcar Links is a championship course once again based on the coast and runs parallel to the North Sea. Located in Bridge of Don, this memorable course is only a fifteen-minute drive from the NorthLink Ferries Terminal so is a great first stop on your journey of exploring Aberdeen’s golf courses.

Founded in 1909, Murcar Links has a par of 71 and is spread across over 6,500 yards. This course has hosted an array of well-known golf competitions – most recently the Scottish Men’s Amateur Championship in 2021.

This course is known to be unsuitable for beginners due to its narrow fairways and unforgiving roughs, where it is almost too easy to lose a ball or five!

Fascinating fact: Murcar Links was the first private golf club in the Northeast to enable the play of golf on a Sunday.

Trump International Golf Links is the most recent golf course to be developed in the Aberdeen area. Established in 2012, Donald Trump (former American President) funded this award-winning links golf course, which is based in Balmedie, and is a twenty-minute drive from the NorthLink Ferries Terminal.

If you aren’t feeling up to taking on the eighteen-holes, the establishment also has one of the largest driving ranges in Scotland which spans twenty-two acres.

Fraserburgh Golf Club is renowned for being the fifth oldest golf club in Scotland! Founded in 1777, this course lies on the coast of the most north-easterly town in Aberdeenshire and is about an hour’s drive from the NorthLink Ferries Terminal.

The course moved to the Philorth Links – its current location – in 1891 and features an eighteen-hole and a nine-hole course therefore making it suitable for all skill levels and abilities.

With a par 70 and over 6,000 yards of a traditional and characterful seaside links, Fraserburgh Golf Club offers stunning views of the North Sea and impressive sand dunes which are featured heavily in the course’s design.

Fascinating fact: Fraserburgh Golf Club is widely thought to be the oldest club in the world which is still operating under its original name.

Braemar Golf Club was founded in 1902 and although it is slightly further afield than some of our other suggestions (roughly one hour and forty-minutes from the NorthLink Ferries Terminal), we believe that this parkland course is well worth the journey.

With a par of 65 and the yardage just short of 5,000, Braemar offers an excellent test for golfers as it has a good balance between basic and more intricate holes. Braemar Golf Club’s claim to fame is that it is the highest golf course within the UK sitting over 1,200 feet above sea level!

Situated in the heart of the Cairngorms, this golf course is surrounded by spectacular scenery to take in as you play. Also, some of the best greens in the area are said to be found here.

Meldrum House Golf Club can be found in Oldmeldrum (near Inverurie) and is a forty-minute drive from the NorthLink Ferries Terminal. Founded in the mid-1990s, this parkland course circles around an eight-hundred-year-old hotel, has a par of 70 and spans over 7,000 yards.

This course is guaranteed to take your breath away with picturesque scenery and an incredible variety of wildlife which live in the surrounding woodland.

Although this course is easy on the eye, it certainly isn’t easy to play! Water features, blind corners and bunkers are dotted left, right and center which demand precision and focus in order to be avoided.

Fascinating fact: watch out on the eleventh hole as the green is fiercely guarded by eighteen bunkers (yes you did read that right!).

Stonehaven is well-known for being one of Aberdeenshire’s most beautiful yet dramatic golf courses as it lays on top of rocky cliffs overlooking the North Sea.

Stonehaven Golf Club was established in 1888 as a ten-hole course but soon expanded to the ‘new’ and present course we know today in 1897. With a par of 66, this course covers almost 5,000 yards and offers spectacular views of the famous ruins at Dunnottar Castle.

Wildlife including seals and dolphins can often be spotted in the bay if you are lucky and vigilant enough. This golf course is a twenty-minute drive from the NorthLink Ferries Terminal and is a challenging course for those who attempt it – especially on a windy day where the coastal winds can be especially ruthless.

Fascinating fact: in the second World War, a German aircraft dropped a bomb on the course leaving behind a large crater (now known as ‘Hitler’s bunker’) between the first and second fairways.

Did you know: golf was banned three separate times throughout Scotland’s history – firstly in 1457 by King James II – as it was believed people spent too much time playing golf and football, instead of practicing archery in preparation for ongoing wars.

By Amy Leith
A marketing student born and raised in Aberdeen with an admiration of the Scottish isles, desire to travel and see the world, a superior taste in music, enjoys cooking and socialising with family and friends. 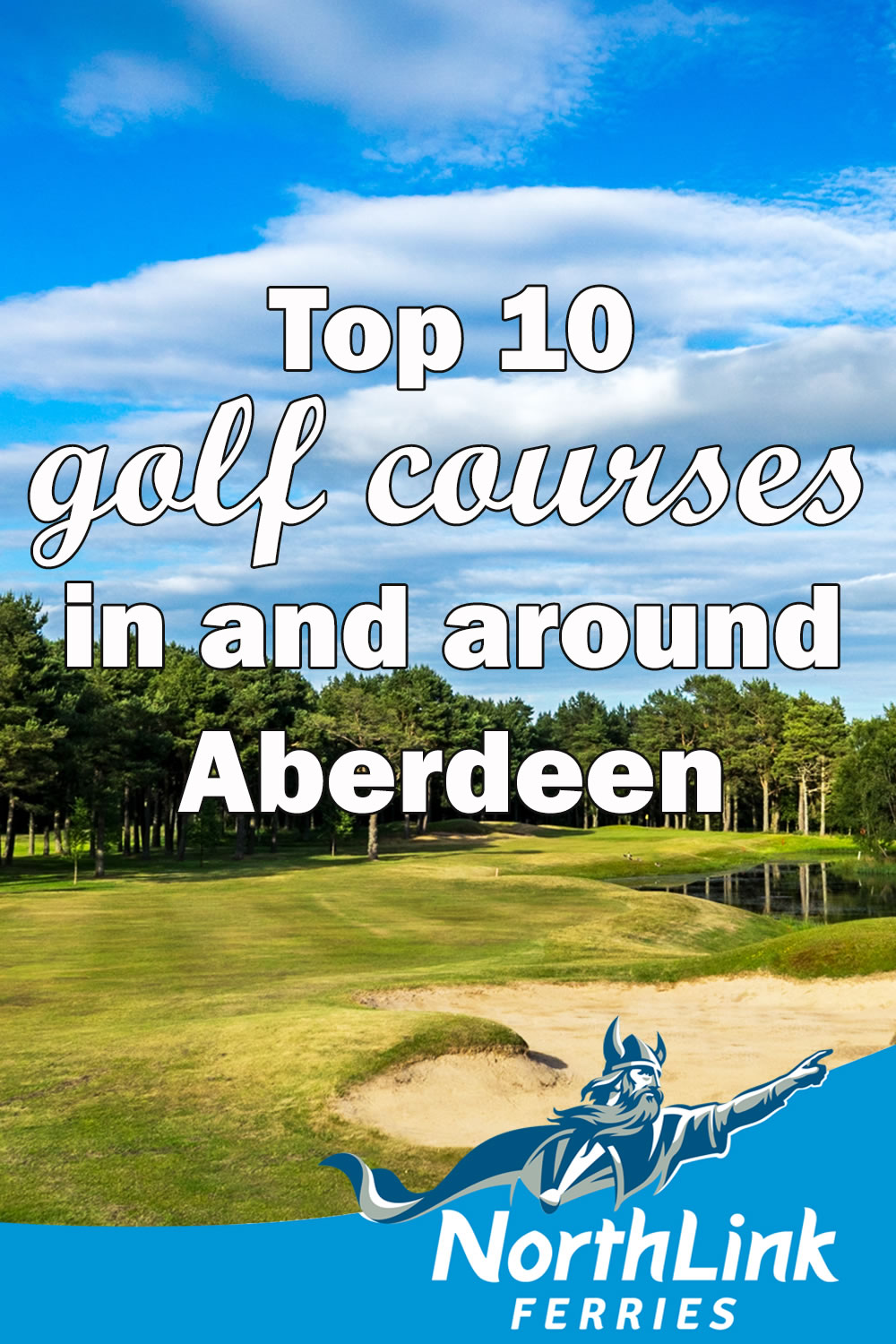 The best walks in and around Aberdeen

One of the finest ways to experience the beauty of Aberdeenshire is by walking and there are countless beautiful and distinctive locations to visit. We hope you enjoy reading about our suggestions on the best walks in and around Aberdeen.