Up Helly Aa is the biggest of the fire festivals that take place in the winter months in Shetland. This Viking themed fire festival takes place in Lerwick on the last Tuesday of January – this year Tuesday 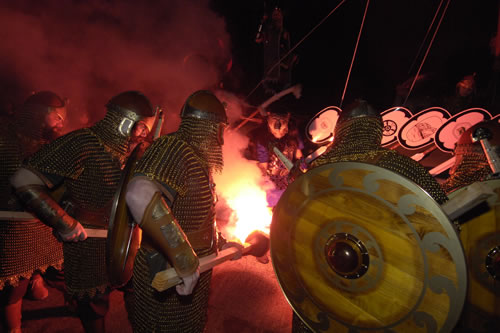 28th January 2020. The day involves a series of marches and visitations and in the evening is the most famous part – the torch-lit procession and Galley burning.

At 18:50, the men, known as Guizers (because they are in disguise), will gather to receive their torches. On the stroke of 19:30, a rocket fired into the sky is the signal for them to light up their torches. Then the blazing procession begins, with almost a thousand men marching, led by a large squad of Vikings; the Jarl Squad. The Jarl Squad march, pulling a Viking Galley with their leader – the Guizer Jarl – standing on top. When the Galley reaches the burning site, the torchbearers form a circle round it and sing the traditional Up Helly Aa song. Another rocket is fired and the Guizer Jarl leaves the ship. A bugle call sounds, and the torches are hurled into the galley! The burning galley and the flames in the January winds are quite as sight to see!

Dates for all Shetland Fire festivals are as follows –

The history of Up Helly Aa

Find out about the origins of the Shetland Viking Fire Festival.

A Visitor's Guide to Up Helly Aa

Read our timetable to the day so that you don’t miss a thing!

How to get to and make the most of Up Helly Aa.

An interview with Up Helly Aa 2015 Guizer Jarl, Neil Robertson

How to take the best photographs of Shetland fire festivals.