A visit to The Gordon Highlanders Museum

I spent a brilliant afternoon visiting The Gordon Highlanders Museum, located on Viewfield Road in Aberdeen.

The Victoria Cross was the highest decoration for gallantry in the British armed forces. These medals were originally made from two Russian canons captured and melted down during the Crimean War. The Gordon Highlanders earned 19 Victoria Crosses in all.

It’s in a beautiful building in a secluded spot, which was once the home of Scottish artist, Sir George Reid and later, The Gordon Highlanders Regimental Headquarters.

The Gordon Highlanders Museum is dedicated to a line infantry Regiment from the North East of Scotland that Sir Winston Churchill in 1900 called “the Finest in the World”. They have an unparalleled reputation of great bravery and resilience in the face of danger. The Gordon Highlanders motto ‘Bydand’ comes from Doric and means ‘to stand fast and endure’.

I received a friendly welcome and was escorted through the museum by Fred and Kevin; two very informative tour guides!

The Regiment started as the 92nd (Gordon Highlanders) Regiment of Foot and was formed during the French Revolutionary Wars. It was made up of men from the Gordon estates in 1794, and the recruitment campaign was assisted by the Duchess Jean of Gordon. She offered the King’s Shilling and a kiss for those who joined her husband’s Regiment. The Duchess’ hat can be seen on display in the museum.

The Gordon Highlanders uniforms during the ages can also been seen in the museum. During the early days the 92nd wore heavy kilts and bright red jackets which were quite conspicuous. They would play the bagpipes as they marched into battle; inspiring the soldiers to advance. If the piper fell, another soldier would pick up the pipes and continue playing.

During the 19th Century the 92nd played an important part in defending the frontiers of the expanding British Empire. The 92nd and the 75th (Highland) Regiment of Foot fought to suppress the Indian Mutiny in 1857 and 1858. In the museum there’s an amazing stuffed tiger’s head from India.

The Second Afghan War lasted from 1878 to 1880. During this conflict the 92nd took just 23 days to march over 320 miles of unforgiving terrain between Kabul and Kandahar.

In 1881 The Gordon Highlanders were officially formed when the 92nd Highlanders and the 75th Stirlingshire Regiment were merged during the Childers Reforms.

The Gordon Highlanders fought in Egypt in 1882 with such distinction that they won the right to wear the sphinx on their garments.

They returned to India for the Indian frontier war in 1897 and 1898. During storming of the Dargai Heights, Piper George Findlater received a Victoria Cross when he continued to play the bagpipes despite having been shot in both ankles!

In South Africa, war was declared between Britain and the Boers: settlers of Dutch and French origin. Between 1899 and 1902 The Gordon Highlanders fought in the Boer War; one of the first wars to use modern guerrilla tactics. The khaki uniforms used in Boer war were on display. During this campaign The Gordon Highlanders suffered severe losses.

During World War One the ranks of The Gordon Highlanders swelled with volunteers but of the 50,000 Gordons who served, there were over 29,000 casualties, 9,000 of whom died. This was a considerable loss for the North East. Throughout the museum I spotted several of the bronze Memorial Plaques which were issued to the next-of-kin of all the British and Empire service personnel who were killed during the First World War.

The Second World War did not begin well for Britain or The Gordon Highlanders. Their first few offensives in France (1940) and the Far East (1942) were crushing defeats. Following their surrender at the battle for Singapore, more Gordon Highlanders died in Japanese captivity than during the fighting.

In later Second World War offensives, The Gordon Highlanders fought with distinction. These included the North African Campaign, Burma, Tunisia and Italy. They also took part in the Normandy landings during D-Day and the long advance into Germany.

After the Second World War, The Gordon Highlanders were stationed in West Germany and in Northern Ireland. They were also involved in campaigns in countries such as Malaya, Cyprus and Borneo.

The Gordon Highlanders Museum opened in 1997 and everything inside has been donated by veterans and their families. It has a lovely tea room, shop and beautiful gardens, and after explaining the history of the Regiment, Fred and Kevin led me downstairs to some special rooms.

I was proudly shown the Maersk McKinney Silver Room. In the British Army the Officers’ and Sergeants’ Messes had their own silver which would travel and be in regular use wherever they were stationed. Among the silver ornaments and awards was a jewel-encrusted snuff horn – the highlight of the room for me!

The Lakin Room had to be unlocked by Fred, and once opened, it revealed an amazing room with not a speck of dust or an object out of place. It is arranged as The Gordon Highlanders Officers’ Mess would have been. Here the table is set with the finest silver, crystal and china. The cutlery has been measured to ensure that it is correctly spaced apart to the last millimetre! A portrait hangs on the wall of The Gordon Highlanders last colonel in chief; the Prince of Wales.

Finally I was shown The Armory, which contains an impressive array of swords, spears, guns and ceremonial daggers. These dated from Napoleonic times to the present day. Fred took great pride in showing me the Distinguished Conduct medals that were stored in this room.

Under the museum’s roof there are 11 of the 19 Victoria Crosses earned by The Gordon Highlanders. The Victoria Cross was the highest decoration for gallantry in the British armed forces. These medals were originally made from two Russian canons captured and melted down during the Crimean War. 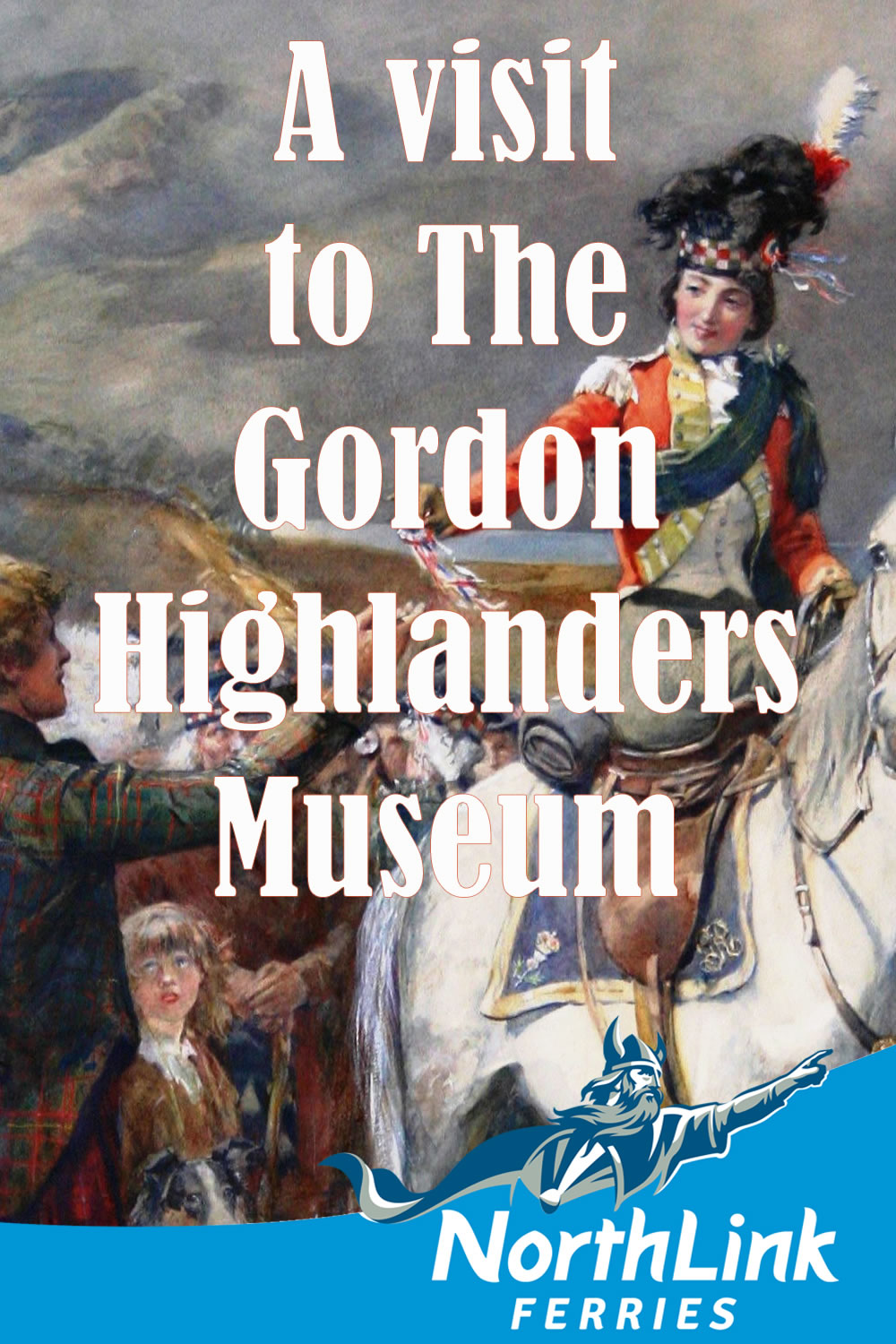