A day at Dunnet Head; the most northerly point of the UK Mainland

Dunnet Head is the most northerly point of the UK mainland, 2.35 miles further north than John O Groats. My family and I throughly enjoyed a trip there recently. We arrived early in the morning and it was a sunny and still warm day. Even then, it was easy to imagine what Dunnet Head must be like on a winter’s day, surrounded by salty sea air and crashing North Sea waves.

The drive to Dunnet Head is a lovely one. A winding road through this peninsula in Caithness takes you past beaches, sea stacks, small hillside lochs, and an old fire-engine before climbing a steep hill. At the top, there is a large car park which sits slightly above Dunnet Head lighthouse. We arrived just in time to see MV Hamnavoe sailing from Scrabster to Stromness. From Dunnet Head it looked tiny!

“Although Dunnet Head lighthouse is only 20m high, it is perched on a 85m sheer cliff face, which places the light 105m above sea level”

Although Dunnet Head lighthouse is only 20m high, it is perched on a 85m sheer cliff face, which places the light 105m above sea level. We took a wander down to the lighhouse, whose buildings once housed a principle lightkeeper and two assistants along with their families. As we did so, a plane flew lazily across the sky, the Pentland Firth beneath it.

The Lighthouse was built in 1831 by Robert Stevenson, an esteemed lighthouse designer and grandfather of Kidnapped and Treasure Island Author Robert Louis Stevenson. You can imagine how visits to remote lighthouses must have inspired these books! By the time Dunnet Head was built, Robert Stevenson had completed 10 other lighthouse projects around the Scottish coast – all remarkable feats of engineering which have withstood the test of time.

Dunnet Head Lighthouse has a range of 23 miles and flashes white 4 times every 30 seconds. In previous times it was run by a series of lighthouse keepers, whose lives would have been a lonely and hard existence. After dusk, keepers were required to keep watch in the lightroom and ensure that the light flashed correctly and to character. Then, during daytime, the keeper would clean, paint and kept the premises tidy.

Dunnet Head occasionally had a Royal Visitor. The Queen Mother, who spent her summers in the nearby Castle of Mey, enjoyed visiting the Lighthouse, and was given tours from the Lightkeeper, followed by tea!

In the late eighties, Lightkeepers hung up their caps, many retiring, as lighthouses around Scotland became automated. Dunnet Head’s light joined these in 1989. These days the light goes on and off using light sensors and it is now monitored remotely and maintained by the Northern Lighthouse Board.

Although the lighthouse isn’t open to the public, there are now two 3-bedroom holiday cottages for rent at Dunnet Head as well as the Engine Room Art Gallery and wedding venue. This was closed when we arrived, but we are keen to return and investigate the Art Gallery – which is a collective space for Caithness artists.

We made our way back up to the car park from the lighthouse and took another path towards the seabird cliff at Dunnet Head. The view of the cliff here was spectacular and a solid wall stands between you and the edge – making it a safe place for parents with children to do some birdwatching. An information board highlighted some of the birds that can be seen during the summer months: guillemots, razorbills, fulmars and puffins. There are also information boards about the plants you can find at Dunnet Head, including spring quill, thrift and roseroot.

Another trail, a bumpy path which rose further up the hill from the car park, leads on to other nature walks, as well as a summit viewpoint. From here you can see the Duncansby Stacks to the East, Cape Wrath to the west and north to Orkney. In fact, just 6.75 miles seperate Dunnet Head from the nearest point in the Orkney islands.

Also in this direction were buildings from the Second World War. Dunnet Head was an very important area during this time. As well as being a radar station, the uninterrupted view from Dunnet Head was perfect for keeping an eye on the approaches to the Royal Navy’s base at Scapa Flow. During the war the Dunnet area became home to many thousands of servicemen.

As we came down the hill from the viewpoint, we noticed that several of the vehicles in the car park were motorhomes, which had clearly spent the night here. Thinking about it, I don’t believe I’ve ever spent a night in such a remote and exposed place, and wondered what it would have been like.

We’d highly recommend a visit to wild windswept Dunnet Head. In fact we’d probably recommend several visits, as we’d love to see it during stormy weather with the sea battering the cliffs and wind howling! We shall definitely return to see the Art Gallery and the work by Caithness artists, who must be easily inspired by the wild and beautiful place they live in. 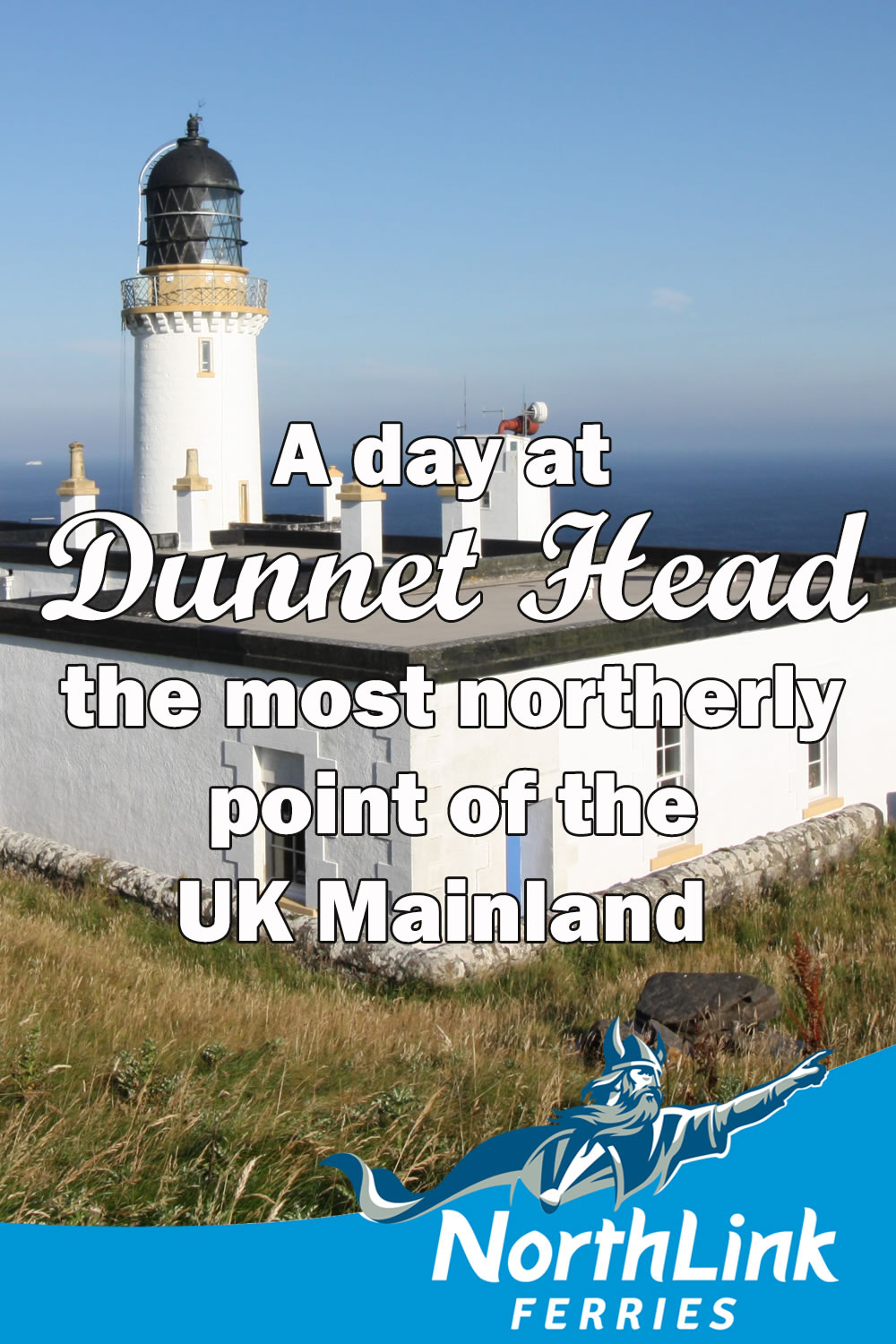