My visit to the Whaligoe Steps

During Billy Connolly’s World Tour of Scotland there’s a moment where he visits the Whaligoe Steps near Wick. I don’t remember much of it, except that it was a stormy day and Billy enthusiastically declared “this is an extraordinary place!“

As I approached visiting the Whaligoe Steps in Caithness for the first time, I wasn’t feeling too enthusiastic I have to confess. I had invited my friend Paul over from Orkney to see some of the fantastic attractions that Caithness had to offer and we had spent the day being rained on. “It’s just ten days until midsummer!” we wailed, as we got soggier and soggier.

The guidebooks state that the Whaligoe Steps can be treacherous when wet, so I was more than a little nervous when we parked up in a small car park, seven miles south of Wick, opposite the signpost to the Cairns of Get. Here’s there’s a large deep water geo surrounded on all three sides by 250ft cliffs.

The Whaligoe steps are 337 steps which zig zag down the cliff side. At the bottom there’s a natural harbour where fishing boats used to arrive and drop off their catch. There weren’t many other viable fishing harbours along this stretch of coast. So in the past, fisherwomen, some as old as 70, would descend the steps. At the bottom they would process the herring, salmon, whitefish and shellfish. The women would then carry baskets of fish on their backs up the steps and walk seven miles to Wick to the fish market.

It had stopped raining as we made our way towards the cliff side. Paul and I passed the Whaligoe Steps Café and made a note to stop there for a cup of tea on the way back, as a reward.

As we neared the cliff the view opened up and we realised the height of the cliff ahead. My fear of heights began to get the better of me until we met a friendly cat sauntering up the Whaligoe steps! If he could manage it then so could I! After a brief petting stop, we continue downwards.

Some of the steps were split, so care is required when descending. There is a low stone wall built on the seaward side, so it’s quite safe, though I would feel uneasy taking children here.

With each turn we were treated to another impressive sight of the geo. Seabirds nestled nearby on the cliff edges and wild flowers sprang from the cliffside.

When we reached the bottom we found a grassy pier called the Bink which was a couple of metres higher from sea level than I thought it might have been. Another set of steps and a slope led to the water’s edge, which was quite rocky. This area is called the Neist and there was a winch here, and there’s more evidence of work from the past such as hoops have been drilled into cliff walls. Paul called out and there was an impressive echo around the bottom of Whaligoe.

“Alongside the Salt Store there’s a drop to the sea, and as I stood here waves rushed in and under to a sea cave. There was a deep bass boom as the sea crashed inside – like the T-rex’s footsteps from Jurassic Park”

In the early days of Whaligoe being used as a harbour the catch was dropped at the water’s edge at the Neist. Later on, the Bink was built, allowing bigger schooners to arrive at Whaligoe.

A photo spotted later in the Café (and above) showed the Bink with tall poles for drying the nets. A wooden jetty used to extend from the bink, where schooners moored. There’s a barking kettle and fireplace here, some tar spillage and the shell of a building; a former Salt Store.

Alongside the Salt Store there’s a drop to the sea, and as I stood here waves rushed in and under to a sea cave. There was a deep bass boom as the sea crashed inside – like the T-rex’s footsteps from Jurassic Park. With the mist rolling in, it was very atmospheric.

Before we left, Paul and I noted that the grass at the bottom of the steps was very tidy. While we have a great deal of respect for the fisherwomen who climbed these stairs with baskets of fish on their backs, we were also impressed by whoever took a strimmer down here! I later discovered that this work is carried out by a gentleman called Davy Nicolson, who has written a booklet about the steps and gives a fascinating interview about them on the Wick Society’s website.

The first records of the Whaligoe Steps were a brief mention in text from 1769. These must have been a rougher version of the steps currently in place. The current steps were commissioned in 1793, when Captain David Brodie spent £8 to cut the steps. By 1855 there were 140 fishermen and 35 boats here. However by 1928 there were only 16 fishermen and 8 boats. The last fishing boat stopped arriving here in the 1960s, but the steps have been maintained by a group of local volunteers.

We made our way back up the steps, and more care was needed on the way up. We stopped for a breather half way up, but the steps were easier to climb than I had anticipated. We passed a group of walkers heading downwards; the Whaligoe steps seem to attract a steady stream of visitors, but it seemed that each group of visitors got the steps to themselves before another group arrived.

Apparently the women used to race each other up these steps, and the winner got a free mackerel! We were happy to make do with a cup of tea, so we called in at the Whaligoe steps Café, which is a lovely building with a large seaward facing glass window. The view from here is very impressive!

The Whaligoe steps Café building was previously a workshop where barrels for transporting fish were made and repaired. We found the step-climbing cat curled up by the fire. Paul and I had a fine cup of tea and reflected upon a super visit to Whaligoe, which hadn’t been as scary as I had feared.

The feat of building these steps was extremely impressive, and it impressed upon me how folk of the past had undertaken very difficult and dangerous tasks as part of their day to day jobs. More than anything, the Whaligoe steps were an atmospheric and rewarding place to visit – in the words of Billy Connolly; an extraordinary place! 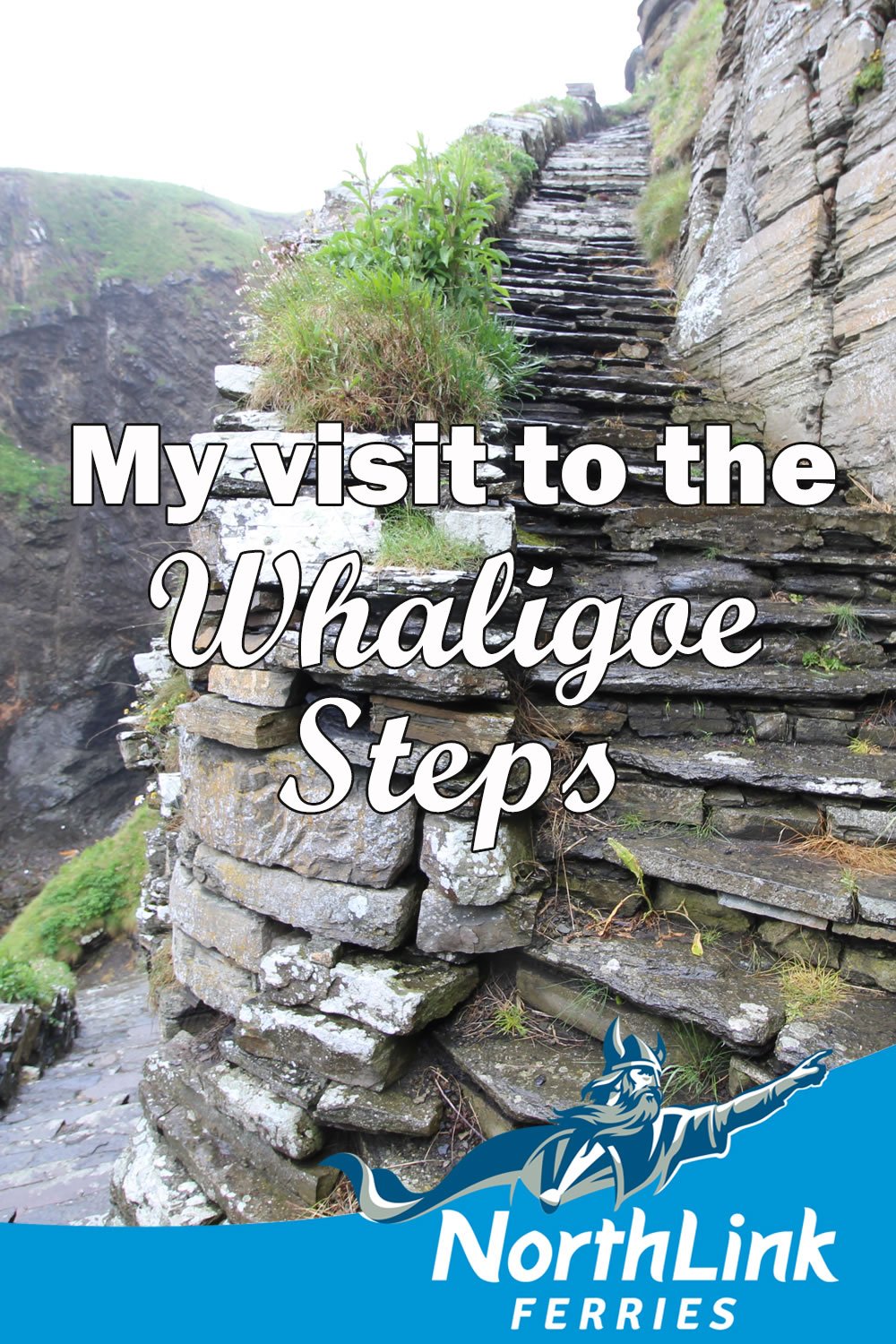