There are some brilliant places to visit in Caithness; including the Castle of Mey, the Whaligoe steps, John O’Groats and the Stacks of Duncansby. However we’ve compiled a list of ten hidden gems to visit in Caithness – places well worth a visit that don’t make the front cover of the tourist brochure!

“A hidden gem that’s also in the Guinness Book of Records! Ebenezer Place is the world’s shortest street measured at just 2.06 m long”

In Wick, just over the bridge, below Caithness General Hospital and opposite the roundabout there’s a hidden gem that’s also in the Guinness Book of Records! Ebenezer Place is the world’s shortest street measured at just 2.06 m long. It has only one doorway; to the Mackay’s Hotel’s No. 1 Bistro. It was declared a street in 1887 after the hotel’s owner Alexander Sinclair (who had made his fortune in America) was told to name the street that the short end of the hotel stood upon. He named it Ebenezer, a name associated with kind acts in people and life, in celebration of the prosperity of his life. It entered the Guinness Book of Records in 2006.

A short (half a mile) eastern walk along the shore from John O Groats will take you to a fantastic beach, called the Ness of Duncansby. The Ness of Duncansby is well known for two reasons. The first is that it’s a great place to watch some of the strongest tidal currents in the Pentland Firth. The second is that it’s one of the best beaches in Caithness for finding shells, including Groatie Buckies or Cowrie Shells! We’d highly recommend a visit; you can walk there or drive to the Stacks of Duncansby, turning left down the road with the sign marked ‘Lighthouse, Cliffs, Stacks, Coastal Walk.’ The surrounding scenery and wildflower-covered links are worth the trip alone!

One of Caithness’s most dramatic castles sits on the coast, 10 miles south of John O’ Groats and 7 miles north of Wick. To reach Keiss Castle you must drive through the village of Keiss, turning down towards the harbour and parking there. The castle is a half mile walk north along the coast, passing two Iron Age ruins; Keiss broch and Whitegate broch.

Keiss Castle stands precariously on a cliff edge – it’s amazing that it’s still standing at all – and despite looking imposing from a distance, it’s much smaller up close. It was 4 storeys high with a room on each floor and it had an attic level and vaulted basement. It was built by George, the 5th Earl of Caithness around 1600. The castle was abandoned in 1755 by the last owner, Sir William Sinclair of Dunbeath, who built another castle inland.

The Cairn of Get

The Cairn of Get is signposted opposite the Whaligoe steps in Ulbster. There’s a car park next to a loch and a half a mile walk, following waypoints through fields, across wooden boardwalks and up heathery slopes to reach it. The Cairn of Get is a very fine burial chamber, around 5000 years old. Stone was robbed from the Cairn in 1800 to build a dam nearby, so the Cairn stands exposed to the elements. It was very skilfully made; a sacred place for ancestral spirits, with a long entrance tunnel and a circular chamber. The folk that built the Cairn of Get were nomadic and did not have permanent homes themselves.

The Cairn of Get was excavated in 1866. The walls were over 2.5m high and there was a 0.5m layer of ashes, burnt wood and fragments of skeletons. The dead were accompanied by offerings such as a red flint arrowhead. Unfortunately all of the finds from that excavation have been lost. There are many other prehistoric remains nearby including burial cairns, stone rows and a hill fort.

The Wick Heritage Centre is located in premises on Bank Row, and it’s a treasure trove of rich Caithness history. Wick was built upon the banks of Wick River and would have been a safe haven for boats that worked the coast. The town profited greatly from the herring boom. In 1862, 1122 fishing boats were based here and 500 gallons of whisky were drunk on a good day!

The centrepiece of the Wick Heritage Centre is the herring fishing boat Isabella Fortuna (pictured) which was built in 1890. As well as displays relating to the herring industry and a kippering kiln, there are also displays devoted to Caithness glass, lifeboats, photography, household furnishings (including authentic Caithness chairs) and much more.

The name Gunn is closely associated with Caithness and one of the area’s most famous sons is the novelist Neil M Gunn (1891 – 1973). Gunns are said to have descended from Pictish kings and from Norse times, particularly from Gunni, the grandson of Sweyn Asleifsson, a hero of the Orkneyinga Saga. They were involved in clan rivalry, the 1745 uprising, and the Highland Clearances which scattered members of the clan across the world.

The Clan Gunn Museum is a great place for Gunns on a pilgrimage to return to; it is situated in the Latheron Old Parish Church which stands on green pastures with dramatic cliff and seas below! This lovely small museum is one of the best clan archives in Scotland; the church was built in 1734 and gifted to the society in 1974. For fascinating history, the Clan Gunn Museum is a must-visit whether you have ties to the Gunn clan or not.

It’s hard to believe, looking at the quiet and picturesque harbour of Lybster today, that during the Herring Boom, this was the third busiest fishing port in Scotland after Wick and Fraserburgh, with 357 boats fishing from the harbour! Lybster was formed around the deep water where the Reisgill Burn enters the sea. The village and harbour were developed during the 19th Century. The village has a wide main street similar to towns in America and Canada because its design came from Patrick Sinclair. Sinclair had been in the army in Canada.

Lybster was where the film The Silver Darlings, from Neil Gunn’s book, was shot. These days the harbour is port for a small number of lobster and crab fishing boats. The Waterlines Visitors Centre is well worth visiting for local history and an unbeatable crab roll in the cafe! Lybster also hosts the ‘World Championships of Knotty’, a sport which is a variant of shinty. Lybster can be found between Wick and Latheron on the A99.

Ousdale Broch is a bit tricky to find, but it is well worth the effort. It’s located 3 and a half miles north of Helmsdale on the A9 and there’s a layby to park in, and a short walk towards the sea. You’ll find this Iron Age broch in a brilliant defensive position, 100m above the sea with a lovely panoramic view. It was built between the 2nd and 3rd century BC and is remarkably well-preserved, with 5m thick walls, an interior that is 8m in diameter and walls that are over 4m high. There are stone tanks set into the floor and a drain to the burn outside. When the broch was excavated by James Mackay in 1891, a hatchet, querns, stone discs, pottery, a jet bracelet and a fragment of a wooden dish or scoop were found!

The Laidhay Croft Museum, north of Dunbeath is somewhere that frequent visitors to Orkney will pass when driving towards the ferry. We would strongly recommend a stop there! It’s a traditional two hundred year old Caithness longhouse with a distinctive thatched roof, and it was restored in the 1970s to give visitors a taste of life in the past. The Norse influence is visible in the longhouse design, which features a dwelling and byre under the same roof.

Keep an eye out for the Caithness Chair (built low to avoid peat fire smoke and with a rail to dry clothes on), the grain-threshing machine and the original cruck roof of the byre which was made from driftwood (including a ship’s mast and an oar). As well as being crammed with items from a bygone age, the Laidhay Croft Museum has a super cafe – the Cullen Skink, bacon rolls and home bakes are all worth the stop alone!

We’ve chosen this last hidden gem of Caithness for no other reason than that it’s a very beautiful place. Westerdale can be found by turning off the A9 at Mybster near Spittal onto the B870 and driving for 3 miles. There’s an old mill standing next to River Thurso with an old bridge. The fast flowing water cascades over flat rocks, and salmon can be sometimes be seen. It’s a lovely spot, ideal for picnics, walks and photographs. There are brochs nearby and Achanarras Quarry, on the same road, is a great place for fossil hunters to seek treasures; a lake covered the area 380 million years ago. The newly built (from local stone) shelter is particularly worth seeking out; the information boards are fascinating! 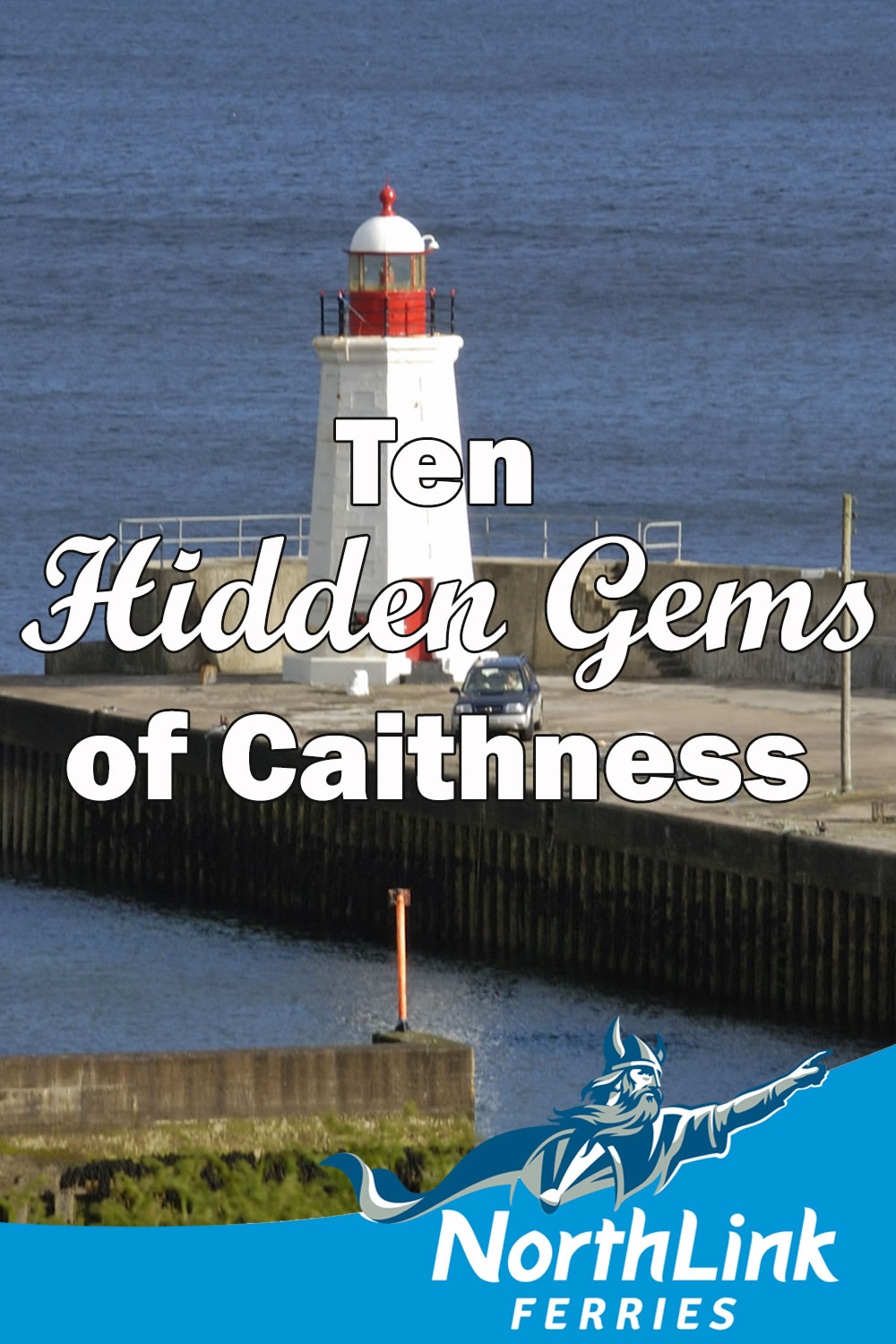