Orkney really is a photographer’s paradise. With a smooth rolling landscape and few trees to block the view, it’s a great place to get snapshots of sunsets. For those who love taking pictures of wildlife, Orkney’s shores and cliffs are great places to see birds and seals. If you love history, there’s an ancient monument or two to photograph also. We hope you enjoy our 25 outstanding pictures of Orkney!

1) Sanderling at Linklet Bay, North Ronaldsay, Orkney. The Orkney Islands attract a wide variety of birds to its wild moors, cliffs and lochs. There are 13 RSPB nature reserves across the islands.

3) Orkney is home to about 15% of the world’s Grey seal population. Seals can often be spotted during a coastal walk. Between September and December Grey seals come ashore on Orkney’s most secluded beaches to give birth to fluffy white pups.

4) The Kame of Hoy is a particularly dramatic cliff on Hoy. It can be seen from Hoy Sound during a journey on MV Hamnavoe. A Kame is a mound of gravel deposited by a melting ice sheet.

5) Lovely Kirkwall harbour is home to fishing and dive vessels and is also the port for many of Orkney’s inter-island ferries. The basin area (for up to 6 metre drafts) is particularly photographic.

6) Maeshowe is a tomb from 2,800 BC, found in the Stenness. It was raided by Vikings in the 12th century who left colourful graffiti upon its walls! During midwinter, Maeshowe is aligned so that the setting sun shines down its entrance tunnel.

7) NorthLink Ferries vessel MV Hamnavoe sails from Scrabster to Caithness to Stromness in Orkney, sailing west of Hoy. Passengers in Hoy Sound are treated to jaw-dropping cliffs, and occasionally a beautiful sunset!

“Skaill House in Sandwick is a historic manor house overlooking Skara Brae. It was one of the owners, William Graham Watt, 7th Laird of Breckness, who discovered the Neolithic village.”

8) Skara Brae is a 5,000 year old Neolithic village next to a lovely beach; the Bay of Skaill. It was uncovered after a winter storm; perfectly preserved in the sand. 50 to 100 people would have lived in Skara Brae at the same time.

9) Beautiful Rackwick Bay is a peaceful beach on the Orkney Island of Hoy. Two large cliffs stand at either side of the bay; one hillside leads up to the Old Man of Hoy. The beach is sandy but there are also giant sea-smoothed boulders and big rolling waves.

10) Skaill House in Sandwick is a historic manor house overlooking Skara Brae. It was one of the owners, William Graham Watt, 7th Laird of Breckness, who discovered the Neolithic village. A visit to Skaill House is recommended, and the falconry centre attached to it is also excellent.

11) St John’s Head, at 1,128 feet (335m), is one of the tallest vertical cliffs in the UK, and can be seen on a journey to Orkney on MV Hamnavoe. The red sandstone cliffs of Hoy are stunning in the evening light. The first climbers to scale St John’s Head took 7 days to complete their challenge.

12) Puffins can be easily seen on Orkney’s cliffs during the summer months, and one of the best places to spot them is the Castle of Burrian in Westray. A puffin’s courtship behaviour includes ‘billing’ where they rub their beaks together.

13) Construction on Kirkwall’s St Magnus Cathedral began in 1137 when Orkney still belonged to Scandinavia. This amazing sandstone building, which was built in memory of a Viking Earl, is a central part of Orcadian life. It is used for weddings, funerals and even concerts.

14) Stenness is one of Orkney’s many fine trout-fishing lochs; and it is a mixture of salt and seawater, meeting the sea at the Brig o’ Waithe. Anglers can often find themselves competing with seals for a bite!

15) Stromness may be not be the largest town in Orkney, but it is definitely the most charming. Built in the 19th century, this old fishing port has houses and piers jostling for space along its waterfront, and a narrow main street to explore.

16) The Churchill Barriers were built during WW2 in response to the sinking of the Royal Oak, a British warship anchored in Scapa Flow. These barriers blocked the entrance to the natural harbour, but also served to link many of the southern Orkney Islands to the mainland.

17) The Hall of Clestrain is the birthplace of Arctic explorer John Rae in 1813. It is a grand old house, located in the parish of Orphir and it has been bought by the John Rae Society, who plan to restore the Hall to its former glory.

18) The Old Man of Hoy is one of the most famous seastacks in Britain. Formed less than 400 years ago when the cliff surrounding it collapsed, the Old Man of Hoy is now a popular attraction for climbers. For a stunning view from the sea, take the Scrabster to Stromness ferry to Orkney.

20) No one quite knows the purpose of the Ring of Brodgar in Orkney. The circle itself could hold up to 3000 people. Perhaps like churches today, this stone circle was used for a variety of purposes and celebrations.

21) The Standing Stones of Stenness are older than the Ring of Brodgar. The circle is smaller but the stones are much taller. There were once 12 stones, including the Odin Stone. The Odin Stone has a hole through which folk would hold hands and make unbreakable promises.

22) As the name would suggest, the Orkney Island of Sanday is renowned for beautiful beaches. The best, in our minds, is Tresness. Part of a thin peninsula and backed by huge dunes, this beach is both dramatic and beautiful.

23) The story of the Italian Chapel is a poignant one. During WW2, over 500 Italian prisoners of war, captured in North Africa, were brought to Orkney to build the Churchill Barriers. Whilst in Orkney, they created this beautiful place of worship, fashioned from Nissan huts, left over concrete and scrap metal.

24) The Yesnaby cliffs in Sandwick are quite spectacular; here you will find sea stacks, blowholes, geos, and, on a wild day, explosive waves! Yesnaby is also a great place to visit if you are looking for the rare flower, Primula Scotica.

25) Waulkmill Bay in Orphir is a flat shallow bay, surrounded by heathery slopes, looking out onto Scapa Flow. When the tide is out, roll up your trouser legs; Waulkmill is a huge sandy bay with warm puddles of water, ideal for paddling in! 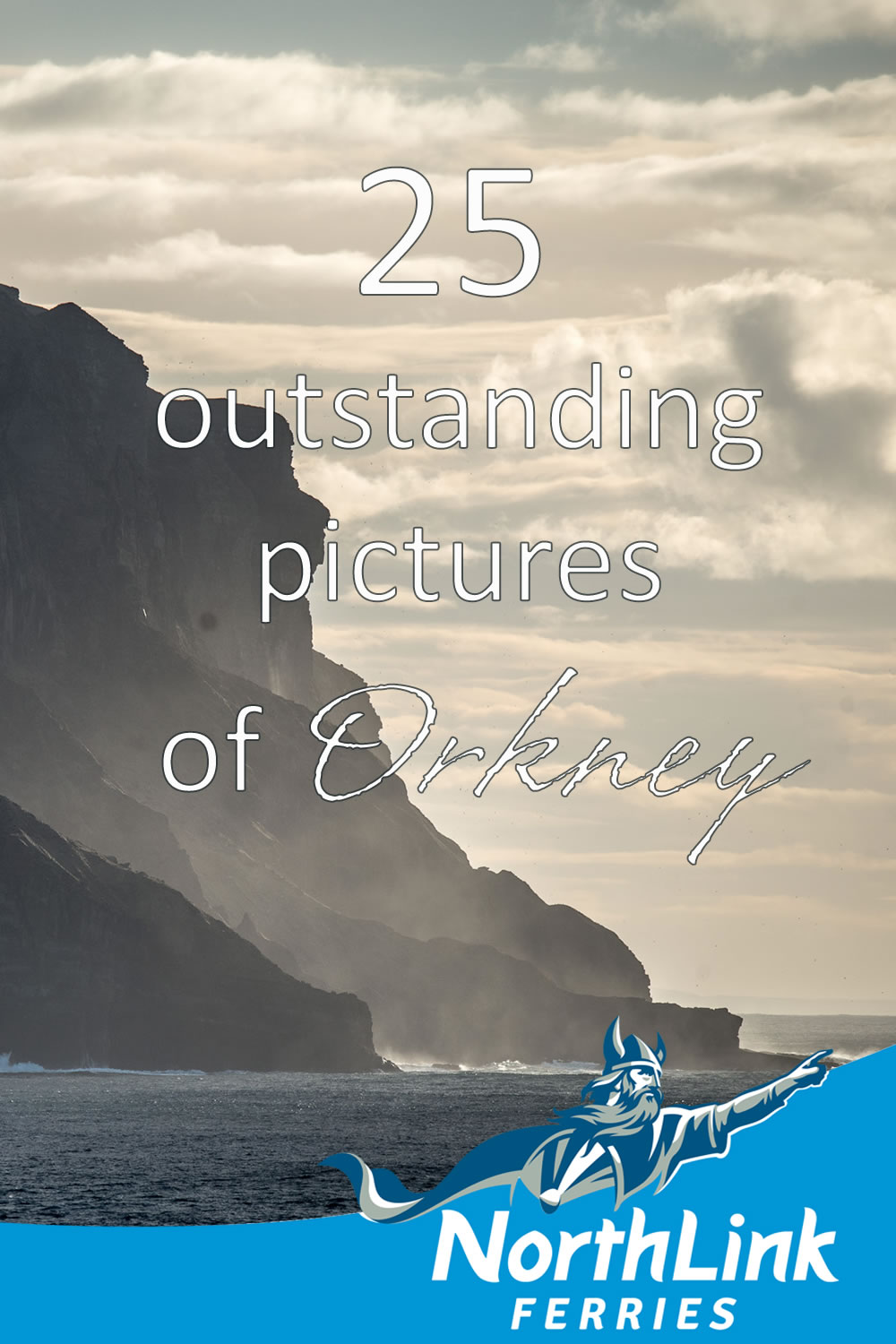