A walk in Deerness

Only a thin strip of land attaches the parish of Deerness to the rest of the East Mainland of Orkney and this is why the area is sometimes called ‘almost an island’. It is a lovely green and fertile place with some stunning beaches at Dingieshowe and Sandside Bay.

For the most adventurous in your party, there are rock-cut steps to the top of the Brough of Deerness. This path is narrow and a little slippery, but there is a chain handrail to help visitors reach the summit. Watch your step if you attempt the climb!

This picturesque location boasts a bracing walk to undertake in the north east corner of Deerness at the Mull Head Local Nature Reserve. This takes in the Gloup, the Brough of Deerness, Mull Head and the Covenanters Memorial. Each can be approached individually, or you can undertake a circular walk and see them all. Walking boots are recommended as this hike is around 3½ miles long and may take between 1½ and 2½ hours.

The Gloup was once a long sea cave, but during storms, the waves that entered the cave couldn’t surge any further and crashed upwards. This caused the roof to collapse into the water below. Now the Gloup is an open chasm 70m long, 40m wide, 30m deep and filled with seawater. The sea still enters the Gloup through the remains of the cave entrance – an arch about 80m wide.

The word ‘gloup’ comes from the Old Norse gluppa, which means ‘precipitous chasm’, and it is a very fine example of how Orkney’s coastline is constantly evolving. There are wooden viewing platforms which are fenced off to allow safe photo-taking, but care should be taken still. On the landward side a stream tumbles down into the chasm below.

The Gloup is spectacular when entered by boat or kayak in calm weather. However, there is a story from 1928 involving famous novelist Dame Barbara Cartland, whose boat sank in the Gloup. Her party managed to clamber up rock ledges to safety, but these ledges have since broken off.

The Gloup can be dramatic on a wild day when waves enter from the east.

The Brough of Deerness

To visit the Brough of Deerness and Mull Head, continue seaward and pass through a gate. Then turn left and follow the coast north for almost 1½ miles.

The journey to the Brough of Deerness is across bare stone with a few wild plants such as thrift, spring squill and sea plantain. These desolate cliff edges occurred because in the 1800’s there was an agricultural practice called ‘paring’. This involved removing the topsoil from coastal areas and spreading it on farmland as fertiliser.

Keep an eye on the sea for offshore islands, including Copinsay to the south and Auskerry to the north.

The Brough of Deerness is a spectacular place. It is a low and wide grassy seastack stack, a small chunk of land separated from the cliff with access nearly cut off at high tide.

There is a staircase down the cliff to the shore. Another scramble must be made over a slope into the rocky cove next to the Brough of Deerness – this is a hidden place beneath the cliffs. The cove itself is fine to splash about in on a summer day, and it is nicely sheltered from the wind.

For the most adventurous in your party, there are rock-cut steps to the top of the Brough of Deerness. This path is narrow and a little slippery, but there is a chain handrail to help visitors reach the summit. Watch your step if you attempt the climb!

There are the remains of a chapel from the late Norse period (11th and 12th century) atop the 30m high sea stack, as well as the foundations of very old stone huts (perhaps houses for monks who lived simple lives here) and a well near the south end. Sheep and pig bones were found indicating that animals grazed on the Brough.

The chapel may have been rebuilt from the stones of an older chapel and it was a site of pilgrimage. Visitors left coins as offerings and 30 were found from the 17th and 18th century. These days, visitors will still find pennies in the chapel, left behind as offerings.

After the Brough of Deerness, it is possible to continue further north for around a mile to the seabird cliff at Mull Head.

On this uneven route walkers will encounter Lang Geo, a long narrow chasm which stretches inland and was once a sea cave. The caves along this stretch of coast were used in the 19th century to store contraband goods, and occasionally by young men hiding from the press gang.

Although the cliffs at Mull Head are not very high, they are still impressive, and the ledges here are covered with seapinks and team with nesting kittiwakes, guillemots, razorbills, and puffins in the summer. Inland the ground is a dense heather heath as a result of being continuously grazed. Mull Head is battered by storms in the winter.

After Mull Head, we would recommend following the path west along the north coast of Deerness towards the Covenanters Memorial. The path there changes from heather to grass with some wooden boardwalks to cross. Take time to enjoy the view out to Orkney’s North Isles.

The Covenanters Memorial is an impressive historic monument which stand 10m high on an exposed cliff (‘a tall stone finger reaches into the sky’ described George Mackay Brown) and commemorates a shipwreck from 1679.

The Covenanters were devoted to maintaining Presbyterianism as the sole religion of Scotland in the 17th century. However, after a failed uprising at the Battle of Bothwell Brig, 1200 Covenanters were taken prisoner. Most were set free, whilst others were executed or died from wounds. The remaining 257 prisoners were to be transported by ship, the Crown of London, from Leith to America to work on plantations as slaves.

On 10th December 1679, the Crown of London sheltered from a storm by anchoring the headland at Scarvataing. The Covenanter prisoners were held locked in the hold. When the anchor broke and the ship was driven ashore, the crew chopped down a mast and managed to clamber ashore and to safety.

The prisoners were not so lucky. Though a crew member hacked through the deck with an axe, only 47 prisoners escaped and made it to shore and the rest perished. Nearly all the prisoners were recaptured (the folk of Orkney were told that they were rebels fleeing from justice) and were eventually sent across the Atlantic to slavery. Some remained hidden in Orkney however, and the first crofters in Rackwick on Hoy were said to be Covenanters.

In 1888 a monument for the 200 lost Covenanters was erected, on a cliff just 250m from where the ship sank, and it is a lovely place to walk to. You can see another memorial to the Covenanters elsewhere in Orkney on a drinking fountain outside St Magnus Cathedral.

To return to the Gloup car park, walk inland to the parking area for the Covenanters Memorial. Then follow the marked path back to the Gloup to complete your circular walk! 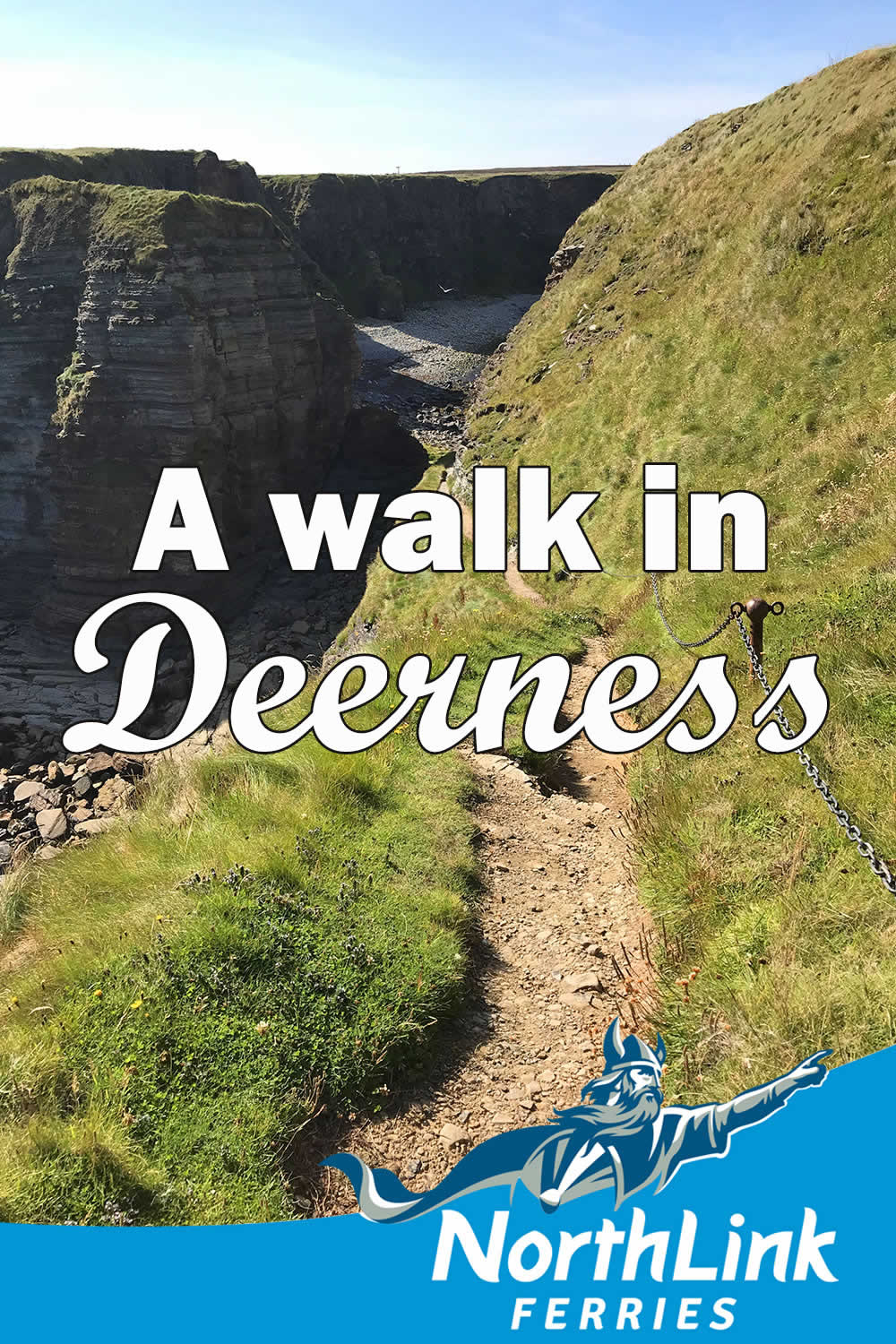 Header image: Climbing the Brough of Deerness in Orkney