All about the Dwarfie Stane

The Dwarfie Stane lies in one of the most desolate and beautiful places in the Orkney islands.

If the Dwarfie Stane is a tomb, it is the only rock-cut tomb in Britain. Similar tombs can be found in the Mediterranean. Archaeologists think the Dwarfie Stane was carved out between the Neolithic and the Early Bronze Age – around 3,000 BC.

It can be found along the ridge of a deep valley under the rocky precipices of the Dwarfie Hamars and looking over to Ward Hill, Orkney’s tallest hill, on the island of Hoy.

This heathery valley is filled with well-used peat banks and the road to Rackwick runs through it. The Dwarfie Stane is located ¾ mile from the car park next to the road – along a rough uphill track laid with wooden boards, stone, gravel and sand.

The history of the Dwarfie Stane

The Dwarfie Stane is a block of red sandstone which was dropped by the glaciers that cut the valley during the last ice age. Another giant slab of rock called the Partick Stane lies about 200 yards along the valley.

The Dwarfie Stane is 28 feet long, 14 feet wide and 8 feet high. Part of it is sunken into the ground. Using only stone or antler tools, a passage and two cells have been hollowed out of the rock – a remarkable feat! Each cell has a distinct lip ‘doorway’, and one of the cells appears to have a stone ‘pillow’.

A massive block which previously sealed the entrance now lies outside. Long before the block was removed, the Dwarfie Stane was broken into – through the roof – but we do not know when this happened. The block was removed sometime after 1560 and the hole in the roof was repaired with concrete in the 1950s.

Is the Dwarfie Stane a tomb? The carved cells match the Orkney-Cromarty class of Neolithic chambered tomb, but no records of artifacts or bones have been found. That said, the Dwarfie Stane was probably plundered long ago. Another possibility is that it was carved by an early Christian hermit – the stone ‘pillow’ is similar to saints’ beds found in Italy.

If the Dwarfie Stane is a tomb, it is the only rock-cut tomb in Britain. Similar tombs can be found in the Mediterranean. Based on their creation archaeologists think the Dwarfie Stane was carved out between the Neolithic and the Early Bronze Age – around 3,000 BC.

Where did the stonemason(s) who carved the Dwarfie Stane stay? Such a job would have taken months or years and there is no human habitation in close proximity. Hugh Miller, author of ‘Hoy, the Dark Enchanted Island’ reported finding a cave high up the cliff behind the Dwarfie Stane containing a long decayed heather floor and an egg-shaped stone. Other theories are that the stonemason(s) lived closer to the shore, near Moaness.

Visitors to the Dwarfie Stane

Visitors to the Dwarfie Stane included a British spy in 1850, Major William Mounsey, who carved in Persian script ‘I have sat two nights and have learned patience.’ He also carved his name backwards in Latin. Cromarty stonemason and geologist, Hugh Miller, also stayed overnight in 1846 – some have suggested the ‘pillow’ could have been made by him!

The Dwarfie Stane was known as ‘Dvergasteinn’ by the Viking raiders who settled on Hoy – the home of dwarfs. The bed spaces – too short for anyone of normal stature – support this folklore! Until the beginning of the 20th century visitors to the Dwarfie Stane used to leave offerings by the door!

In one Orkney fable a giant made the Dwarfie Stane for his pregnant wife. However, they were imprisoned inside it when another giant (who wanted to be master of Hoy) sealed the door with the entrance block! The imprisoned giant escaped by gnawing a hole through the roof (explaining the now-repaired hole in the roof!)

In Sir Walter Scott’s The Pirate, Trolld, a dwarf famous in the northern Sagas regarded the Dwarfie Stane as his favourite residence. Snorro the dwarf also lived here – his story is wonderfully told by Sigurd Towrie here – http://www.orkneyjar.com/folklore/snorro2.htm

The nearby valley is called Trowieglen (the home of fairy folk) and it is said that you will lose something if you go here – for the trows will steal it!

Another tale tells of a dwarf who was trapped inside by a giant when he was working inside his home. The giant could hear the dwarf muttering inside so he turned his head closer to the rock to listen. However, the dwarf stuck his thumb through the roof and the shattered rock struck the giant. He fell down dead nearby; his body becoming the Partick Stane. 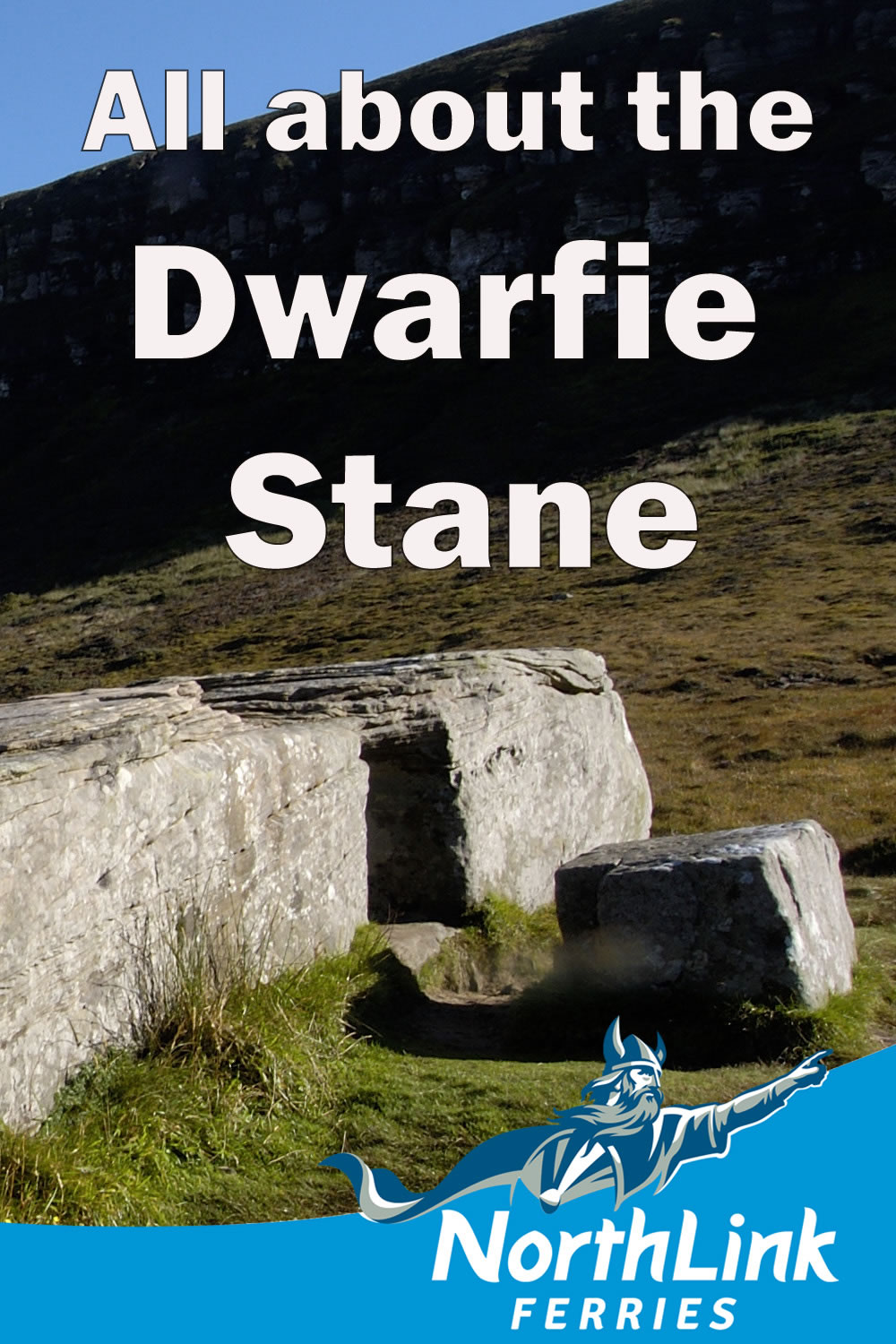