Assipattle and the Stoorworm is an exciting traditional folk tale once told around the fire in the Orkney Islands. It describes how Orkney and Shetland were formed, and the smouldering volcanoes of Iceland!

On a small farm there lived a couple with seven sons. The six eldest worked hard, but the youngest did nothing but lie by the fireside, raking through the ashes, so they called him Assipattle (ash-raker). He said that he would fight the Stoorworm, but his brothers just beat him and called him names.

There was once a kingdom in the north that suffered a terrible fate. The Stoorworm arrived at its coast and started to yawn. The Stoorworm was the oldest and largest of all the sea serpents and its yawning meant that it was hungry and needed to be fed.

A wise man said that the only way to save the country was to feed the Stoorworm seven maidens every Saturday morning. This happened for a time, but it was too high a price to pay, so the king turned back to the wise man for more advice. He was told that the only thing that would make the Stoorworm go away is if it was fed the king’s only child, the Princess Gem-de-Lovely.

Instead the king called for a brave knight to fight and kill the Stoorworm in return for the king’s magic sword, Sikkersnapper, his kingdom and his daughter’s hand in marriage. Many brave knights answered the challenge, but most ran away or fainted when they saw how big the monster was. Eventually the king declared that he would fight the Stoorworm himself.

On a small farm there lived a couple with seven sons. The six eldest worked hard, but the youngest did nothing but lie by the fireside, raking through the ashes, so they called him Assipattle (ash-raker). He said that he would fight the Stoorworm, but his brothers just beat him and called him names.

The night before the king was due to fight the monster, Assipattle stole his father’s horse and rode to the bay where the Stoorworm’s head lay. He found a small cottage there and took an iron pot into which he placed a glowing peat from the fire.

He stole the king’s boat and sailed towards the monster, just as it woke. The water that flowed into the Stoorworm’s mouth as it yawned carried Assipattle and the boat down its throat. When the boat came to rest inside the monster, he ran until he found the Stoorworm’s liver and he set it on fire with the smouldering peat. The oil in the liver spluttered into flames and was soon blazing away.

The king had arrived just in time to see Assipattle sail his boat into the monster’s mouth and be swallowed. He expected his kingdom to be destroyed at any time. But instead they saw smoke coming out the Stoorworm’s nose and mouth. The dying creature spewed out all the water that was in it, including Assipattle and the boat.

It shot out its huge forked tongue and grabbed the moon, but it slipped over it and fell to earth with a crash. The tongue left a huge hole in the surface of the earth, which filled with water to become the Baltic Sea. Its head rose up high and fell back down with such a force that some of its teeth were knocked out. These teeth made the Orkney Islands.

A second time the head rose and fell, knocking out more teeth, which became Shetland. A third time saw more teeth knocked out, making the Faroe Islands. Then it curled up its body into a tight lump and died, and there it remains as Iceland. The volcanos and boiling water gushing out of the ground is the result of the fire that still rages in the Stoorworm’s liver.

The king was delighted and embraced Assipattle, giving him his sword ad kingdom. The princess was happy to marry her rescuer, who was as handsome as she was pretty. They ruled the kingdom wisely, and if they are not dead then they are living yet!

With grateful thanks to Ellen Forkin for her Stoorworm illustration. 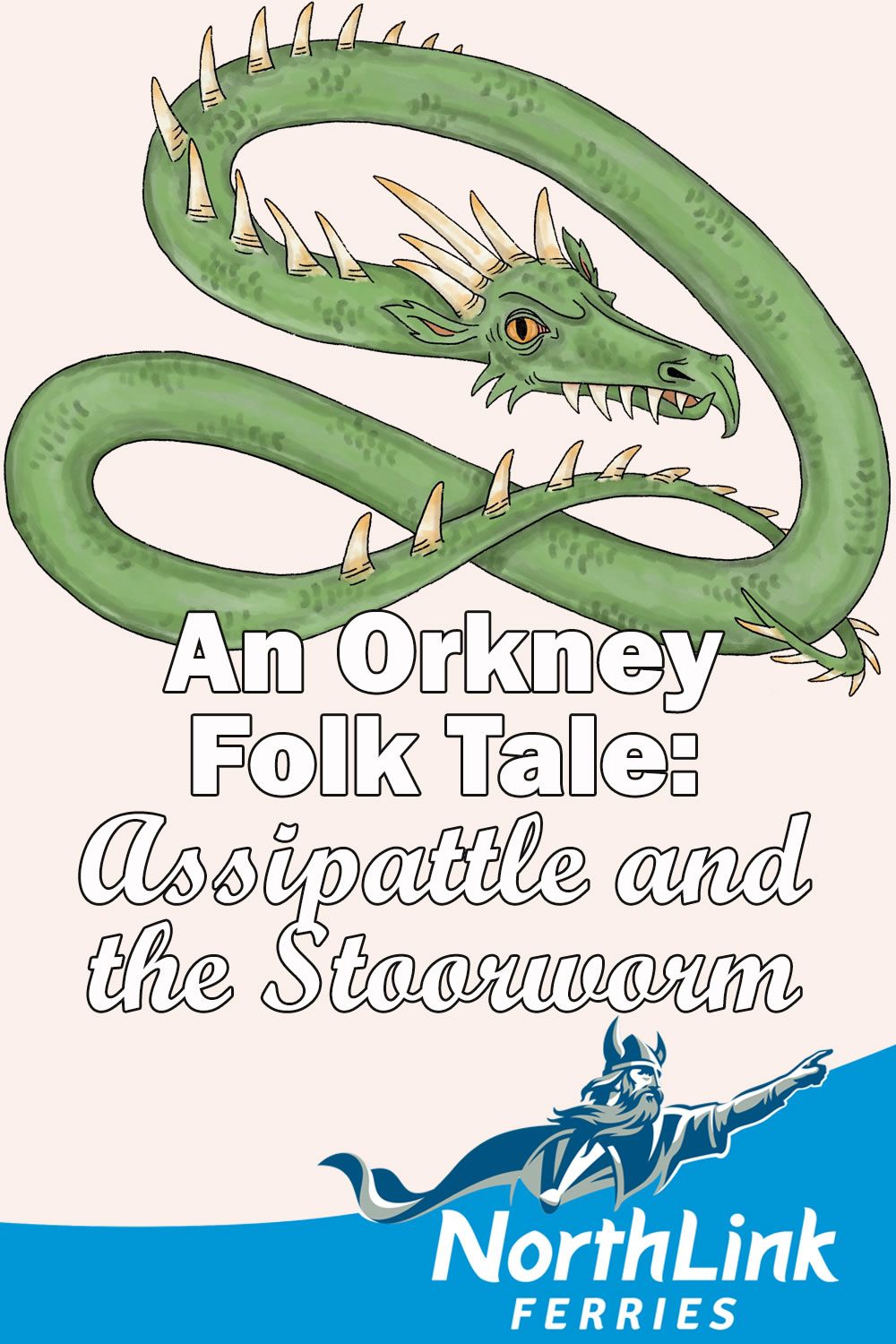