Kirkwall would have looked quite different when the Bishop’s Palace and the Earl’s Palace were built next to St Magnus Cathedral. The Bishop’s Palace was built first, in the 12th century, and at the time, Orkney was still part of the kingdom of Norway.

Norwegian King Hakon IV ruled over Orkney and Shetland. In 1263, he planned spend the winter in Orkney. However, whilst staying at the Bishop’s Palace, King Hakon IV fell ill and passed away. Imagine how it would be if the King were to die in Orkney today!

The Peedie Sea was much bigger, a natural harbour with a waterfront very close to the Cathedral steps. Albert Street, Broad Street and Victoria Street roughly follow the old shoreline.

We hope you find these facts about the Bishop’s and Earl’s Palace illuminating!

1. The Bishop’s Palace was built at the same time as St Magnus Cathedral.

Earl Magnus was murdered in 1115 because of a dispute over jointly ruling Orkney with his cousin. Following this, miraculous happenings occurred near his gravesite. Though initially Bishop William the Old (1102 to 1168) dismissed these tales, he was himself cured of blindness after praying at the grave. Magnus was declared a saint in 1135.

In honour of his uncle, Earl Rognvald Kolson built St Magnus Cathedral in Kirkwall in 1137. Accommodation was built nearby for Bishop William the Old, who was also Kolson’s friend, and he moved from his old seat of power in Birsay to the Bishop’s Palace, becoming the first Orkney Bishop to be permanently based in Kirkwall. The statue built into the Bishop’s Palace is of Earl Rognvald Kolson.

2. The Bishop’s Palace was originally larger than the building seen today.

In medieval times, a Bishop was an important figure and required an impressive home. It had to be near his Cathedral and able to accommodate Royal visitors. The Bishop’s Palace had an amazing long and high-roofed hall. It also had a large square tower which is now gone. It occupied some of the area where the Earl’s Palace now stands.

The earliest stonework in the Bishop’s Palace can be easily spotted as the sandstone is red and yellow, similar to the materials used to build the Cathedral next door. The Bishop’s Palace was the only palace built for a Bishop in Norse Scotland and is the oldest surviving domestic building in Kirkwall.

Norwegian King Hakon IV also ruled over Orkney, Shetland, and the Western Isles. However, in 1263, King Alexander III of Scotland made aggressive attempts to recover the Western Isles and this culminated with the indecisive Battle of Largs.

The Norwegians, led by King Hakon IV, withdrew to spend the winter in Orkney and planned to continue the battle the following summer. However, whilst staying at the Bishop’s Palace, King Hakon IV fell ill and passed away. Imagine how it would be if the King were to die in Orkney today!

A few notable events occurred in the aftermath of King Hakon IV’s death. The Hebrides became a part of Scotland. In 1290, the Maid of Norway, Margaret, who was to be crowned Queen of Scotland, became gravely ill whilst travelling from Bergen to Leith and died in Orkney. Her body was laid to rest at the Bishop’s Palace before returning home to be buried alongside her mother. This is where the place-name St Margaret’s Hope comes from. By 1320 the Bishop’s Palace was in a poor state and by 1472 Orkney was a part of Scotland.

In 1540 King James V visited Orkney and decided that a strong new Bishop was required for the islands. Robert Reid (the founder of Edinburgh University) was appointed, and he began renovating the Bishop’s Palace in 1541.

The walls were heightened, and a splendid round tower known locally as the Moosie Tooer was built. Visitors can climb this today for a super view of Kirkwall. It is noteworthy that the tower was built with defensive features. At the time, there was a great deal of tension between Earls and Bishops!

In 1593, the notorious Patrick Stewart became the Earl of Orkney and in 1601, he began to construct the Earl’s Palace next to the Bishop’s Palace.

6. Building the Earl’s Palace was part of a project to make a magnificent palace complex.

The Earl’s Palace was built between 1601 and 1606. It incorporated the older Bishop’s Palace as extra accommodation for the Earl’s household. This ambitious project was designed by the Earl’s Master of Works, Andrew Crawford, and was called the ‘Palace of the Yards’.

It was enclosed by a perimeter wall, incorporated an earlier well, had formal gardens, a courtyard, a kitchen garden for growing produce, large storerooms, a massive kitchen, large vaulted windows, corbelled turrets, splendid stairways and impressive entrances. The Earl’s Palace also had a 5m-wide fireplace set in a magnificent hall. The information board on site (pictured below) beautifully illustrates what the complex looked like at the time. The building is said to be one of the finest examples of Renaissance architecture in Scotland.

7. However Earl Patrick Stewart’s reputation was not so impressive.

Earl Patrick Stewart was the illegitimate cousin of King James VI of Scotland and though they were once friends, this had ended because Patrick was irresponsible, arrogant, and ambitious.

In Orkney, Earl Patrick Stewart was despised. He was known locally as ‘Black Patie’ and was said to have used forced labour to build his palaces and castles. He had a reputation for cruelty and for fine things that he could not afford. This meant that he only occupied the Earl’s Palace briefly, as the project had left him drowning in debt. In 1607 Earl Patrick Stewart was forced by Royal decree to hand the Palace over to his arch enemy, and friend of King James VI, Bishop James Law. He only finally did so in 1610.

8. Earl Patrick Stewart caused chaos in Orkney even whilst in prison.

In 1609, Earl Patrick Stewart was a prisoner in Dumbarton and Edinburgh. The charges against him included the theft of lands and funds, oppression of local people, kidnapping, torture, and murder.

However, in 1614, whilst incarcerated, Earl Patrick Stewart organised a revolt against King James VI. His supporters and his son, Robert Stewart, captured the Palace of the Yards, St Magnus Cathedral and Kirkwall Castle but after two months they were forced to surrender to government forces. In 1615, Robert Stewart was hung and shortly afterwards, Earl Patrick Stewart was beheaded for treason.

9. After the death of Earl Patrick Stewart, the Bishops of Orkney lived in the Earl’s Palace.

Following the Stewarts, the Bishops of Orkney lived in the Palace of the Yards, beginning with Bishop Graham in 1615. A string of Bishops followed but by 1705 the Earl’s Palace was uninhabitable.

It is amazing to think that such a beautiful building could go from foundation to ruin within a century. By 1745, the roof of the Earl’s Palace had been stripped. The timbers were used elsewhere, and the slates sold. It has remained roofless ever since.

10. The Earl’s Palace and the Bishop’s Palace are now handsome ruins.

There was a brief suggestion in 1849 to turn the buildings into a courthouse and jail but this did not come to pass. Then in 1877, the two buildings became divided by a wider road. To accommodate this, one of the original entrances into the Palace of the Yards, called the Watergate, was removed, and rebuilt into the wall of the Bishop’s Palace.

In 1920 both the Earl’s Palace and Bishops’ Palace were taken into state care and a ticket to explore both can be purchased in the summer from Historic Environment Scotland. These days the grand buildings now offer a stunning backdrop for the many Kirkwall wedding photos taken on the grounds, and for the curious, a fascinating insight into medieval Orkney. 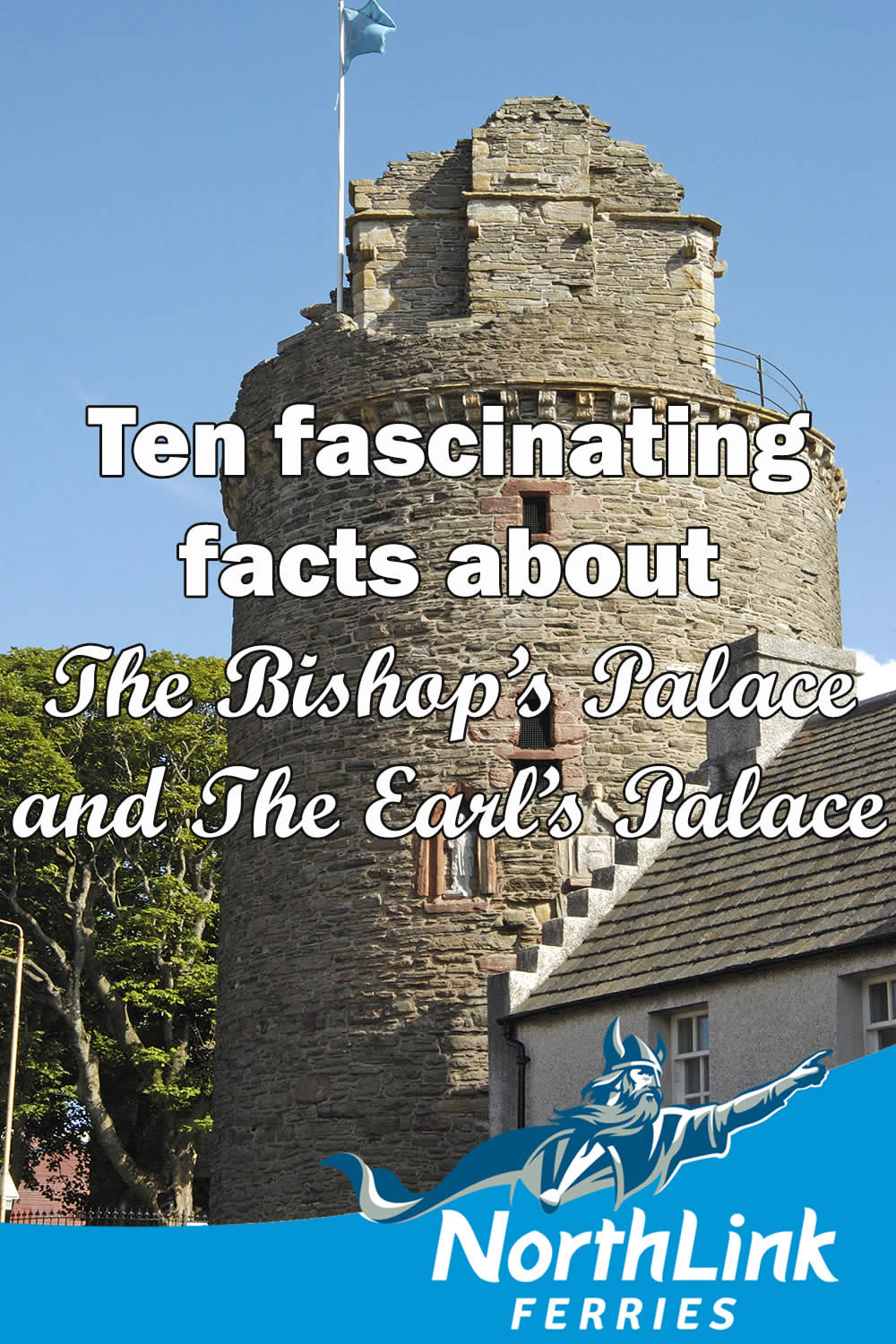