A Guide to The Brough of Birsay in Orkney: all you need to know before you go!

Until 26th April 2021 travel in Scotland is allowed, however, restrictions on overnight stays are in place. From 26th April 2021, non-essential travel between Mainland Scotland and Orkney and Shetland will be permitted. To reduce the risk of coronavirus being brought into island communities, the Scottish Government is encouraging anyone planning to travel to a Scottish island to test before they do so. Please view our convenient refund policy should you need to change your travel plans. Log in / Forgotten Password? / Register as an Islander / Register as a standard customer / Book as a guest.

For an Orkney adventure to remember we’d highly recommend a visit to the Brough of Birsay. This is a tidal island on the north-west tip of the Orkney mainland which can be reached by a causeway when the tide is low. On the island itself there are the remains of a Viking settlement and the earlier Pictish community. The Brough of Birsay is also one of the best places on the Orkney Mainland to see puffins.

We have compiled a list of fascinating facts you need to know about the Brough of Birsay and surrounding area before you go!

The location of the Brough of Birsay

The concrete causeway from the beach joins the Brough to the Orkney Mainland. It is approximately 150m long and accessible during low tide (though appropriate footwear is essential as it can be slippery and uneven.) During high tide the causeway is submerged underwater and the strong tides here make it dangerous to cross. We would recommend that you check the tide times (available on the Met Office website) before you visit.

Once at the other side there is a beach and a concrete slope up onto the Brough. The island is a grassy slope which faces the Bay of Birsay.

Before the causeway was built in the 20th century, people would have crossed over the rocks and rockpools to the Brough of Birsay. Excavation work has shown that there were Pictish inhabitants on the island from as far back as the late 6th century.

Though most of the buildings seen on the Brough are from the later residents, the Vikings, traces of the earlier Pictish settlement can be found. A small well (pictured above) on the Brough and foundations under the later buildings are thought to be of Pictish origin, and an impressive carved Pictish symbol stone was found on the island. The symbol stone was found smashed, however, a reliable reconstruction was built and the impressive cast can be seen standing on the Brough of Birsay today.

Other finds suggested that the Pictish people were skilled craftsmen who led a sophisticated lifestyle for several centuries before the Vikings arrived. These included moulds for fine bronze jewellery (pictured above), fragments of glass, bone pins and combs, and a spindle whorl with an Ogham inscription. These were found amongst Norse artefacts in houses on the Brough and suggest that the Norse take-over may have been a continuation of previous life rather than a sudden, violent event.

Birsay was an important area for the Vikings; the Earls of Orkney stayed here, as did the Bishop, who only moved to Kirkwall during the building of St Magnus Cathedral in the 12th century.

The Vikings arrived on the Brough of Birsay during the 9th century and the Norse settlement there was developed over the next three centuries. The process of building and rebuilding structures has left a complicated maze of stone walls, one on top of the other. Remains of several Norse longhouses, barns and a smithy can still be seen today, as well as an 11th century sauna with underfloor heating! A 12th century church was the last of the structures built by the Vikings.

A small 12th century Romanesque-style church lies at the heart of the Viking settlement. The Orkneyinga Saga suggests that the church was established by Thorfinn ‘the Mighty,’ Earl of Orkney. The church is surrounded by buildings which may be monastic.

The church was only used for a short time; there were very few medieval artefacts discovered there, and the west tower of the building was never completed.

A stone slab depicting a cross was discovered covering a grave close to the church. It can now be seen in the site museum, under cover to preserve and protect it from stormy conditions.

Up to the lighthouse and puffins

The lighthouse on the Brough of Birsay continues to play an important role in providing a safe passage for ships. It was built in 1925 by David A. Stevenson, who built 26 lighthouses in his lifetime and only retired at the age of 83.

The lighthouse was gas-powered (but converted to solar power in 2001) and designed to be unmanned.

Today the lighthouse is maintained by the Northern Lighthouse Board. Reaching it involves a gentle walk uphill from the settlement on the Brough. On the seaward side it stands above some low cliffs, 45m above sea level. These cliffs are a great place from which to see cetaceans and puffins which nest in the cliffside rabbit burrows.

The Brough of Birsay is one of the best places in the Orkney Mainland to see puffins. They nest on the cliffs between the months of May through to July each year. The remainder of the year they live out at sea. Adult puffins have rainbow coloured hues on the bills and can hold between 10-12 sand eels (their seafood of choice) in their beaks at one time.

The beach at the Point

Even if you arrive at the Brough of Birsay during high tide and are unable to cross the causeway, the rough shell sand beach below the Point of Buckquoy car park is a super place to visit. It’s a great beach for children, with plenty of sand for playing in, rockpools to explore filled with hermit crabs (and other fascinating marine life) and shells to find.

The beach at the Brough is known amongst Orcadians as a good place to search for Groatie Buckies (the shells of Common Cowrie – pictured below – named because they are common at John o’Groats). If you put a Groatie Buckie in your purse, the saying goes that you will never be poor!

There are also fossil fish to be found in the exposed dyke below the road at the Point of Buckquoy. These are remnants from Devonian times when Lake Orcadie covered the islands. Keep your eye peeled for dark fish scales here and for fossil plants in boulders on the Brough itself.

The Fishermen’s Huts and whalebone

A short walk around the coast from the car park, and in the opposite direction to the Brough is Northside, and we’d highly recommend a jaunt in this direction.

This is a bracing and dramatic walk on a stormy day and a lovely walk at sunset with great views of Westray and Rousay. The path is signposted to Skiba Geo, and well-trodden.

It leads first to a fishermen’s hut above a stony geo. This early 20th century building was restored by pupils from Dounby School and in front of its door are a series of indentations in the earth. These are the size and shape of the boats that used to fish from here. These nousts are where fishing boats were stored during the winter.

Further on you’ll find the Birsay whalebone; the remnants of a whale washed ashore here in the early 1870’s. Now a single whale rib and part of the skull create a striking sculpture well worth visiting. There is a fine panoramic view of the Brough here.

For enthusiastic walkers, we’d recommend continuing on east to Langalebe Geo. This is a long narrow geo (formed by collapsing sea caves) which is popular with nesting birds.

The Earl’s Palace in Birsay village

Though these days the Earl’s Palace in Birsay village is little more than a series of tall crumbling walls, the sheer scale of the building gives you a sense that this was once a very impressive stronghold. Built in the late 16th century by an unpopular Scottish Earl, Robert Stewart, the building was once four two-storey wings and three towers which surrounded a courtyard. In the centre of the courtyard there is a well, and there are holes for guns in all the walls.

The area around the Brough of Birsay is really lovely and it is a great place to see some impressive sunsets. Make sure you take your family and camera to this picturesque part of Orkney! 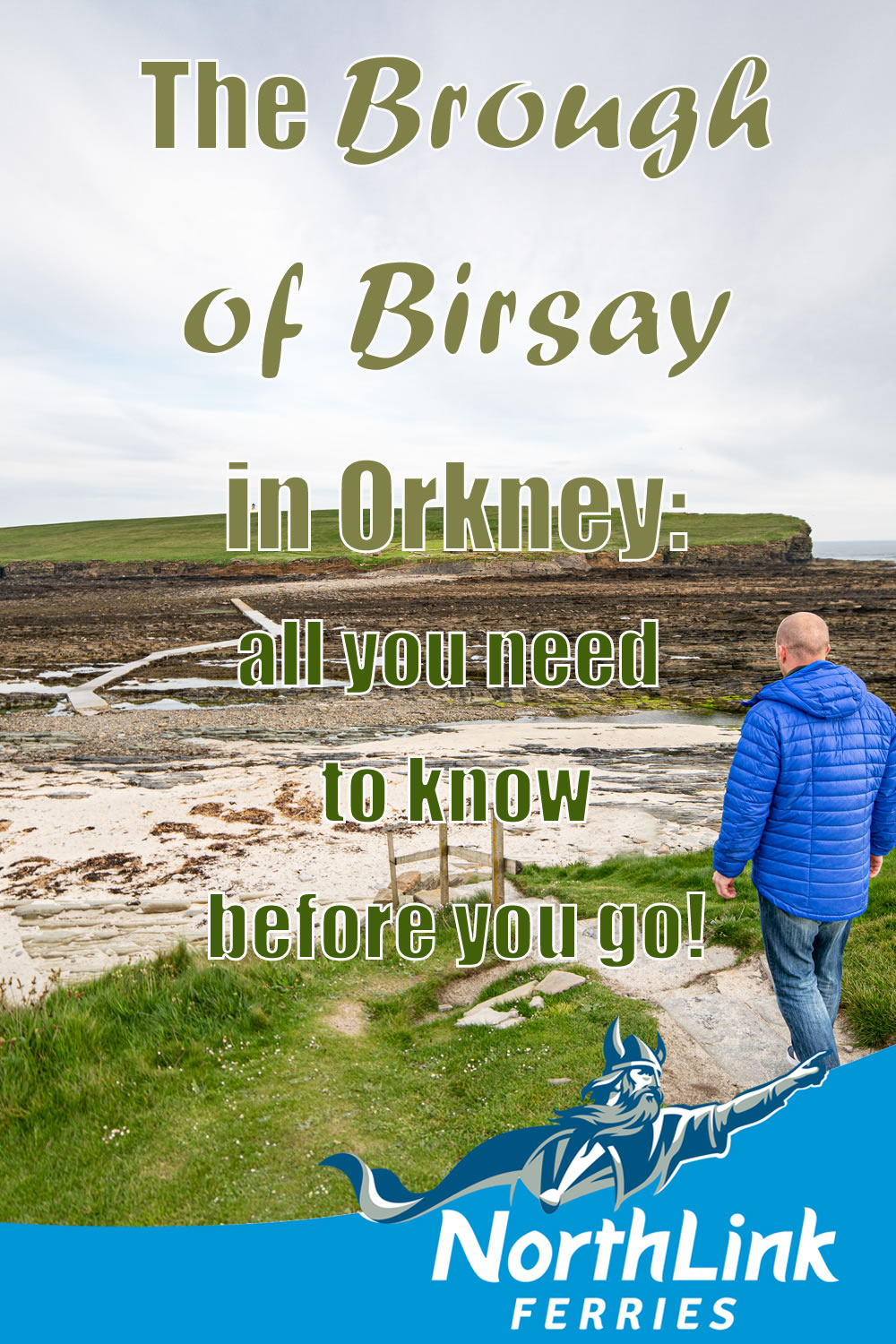 A walk up Wideford Hill

Wideford Hill is one of the most distinctive hills on the Orkney Mainland but not many have ventured to the summit. We recommend a walk (or a drive, as there is a road to the top) to view the amazing panorama across the islands and to visit Wideford Hill Chambered Cairn.

Orkney Gin Company is run by Orcadian couple Gary and Andrea Watt who are passionate about their hand-made spirits, using botanicals grown in the isles and bottles decorated with selkies from Orkney folklore.