A walk to the Knowes of Trotty

We think that the award for the best name in Orkney archaeology should go to the Knowes of Trotty, and it was nothing more than the name that convinced my family and I to go on a walk to find it.

It’s a bit tricky to locate however – though on the map the Knowes of Trotty appear close to Netherhouse farm there isn’t access this way and you have to take a longer route around. To get there my family and I drove on the Stromness to Kirkwall road and turned left onto the A986 at the Dounby Junction, just before Finstown. We continued on for 1 1/2 miles until we spotted the Howe Road, signposted on the right, directly opposite the Grimeston Road.

We turned and took the Howe Road for 1/4 of a mile until we reached a small car park on the right, directly opposite a road turning.

From there it was out of the car and a walk up a farm track. It was a warm autumn day and we were excited for our adventure, unsure of what the Knowes of Trotty would look like. I carried my son’s backpack, which was full of picnic food. The road swings round to the left after Winksetter farm and then there’s a path through some boggy and heathery ground. The path was very roughly marked by tracks in the heather, though there was some relief when we reached boardwalks to take us over the wettest bits.

The walk took us under the western slope of the Ward of Redland – the Knowes of Trotty are located at the foot of this 200m tall heathery hill – a 45 minute walk. My son and I went on ahead, and my daughter and wife followed on. When we reached the first of the Knowes we actually passed it before we realised what it was!

The Knowes of Trotty is the largest Bronze Age burial site in Scotland. There are two rows of mounds which make up 16 barrows, and they appear as rows of small hillocks. These barrows were raised on top of natural mounds and were in use during the Bronze Age (between 2,000 BC and 1,600 BC).

“The mound was first excavated in 1858 by the proprietor of the farm, and he found a stone cist with human bones, 27 amber beads and four remarkable paper thin gold discs inside.”

There isn’t a great deal of Bronze Age archaeology in Orkney – it’s overshadowed by earlier Neolithic archaeology – but it’s worthwhile noting that the Bronze Age was marked by a shifting in attitudes. At this point, communal tombs and close knit settlements (like Skara Brae) fell out of favour and were replaced by individual barrow burials and family farms. It is likely that we don’t find remains of all the Bronze Age farmsteads because they are in exactly the same sites as their modern day equivalents. Bronze Age tombs are more often found in Orkney than houses from the same period, and they always appear to have been for important members of society.

We scaled a couple of the knowes and were treated to a fine view of the flat green farmland of the West Mainland all the way to the hills of Hoy. We were surrounded by lovely wildflowers. With this magnificent landscape spread in front of us it was easy to see why folk in the Bronze Age chose this as a place to honour their dead.

We sat down and had our picnic on top of one of the Knowes; enjoying the gentle breeze, the curlew calls and the peeping of oyster catchers. These hills are known to be popular with Hen Harriers, so we kept an eye out for white wings.

When the food was eaten and the backpack empty, my son and I decided to march a little further on to explore what seemed to be the most prominent burial mound. It and the mound next to it were greener and not covered in heather like many of the other barrows. It was within farmland, so we visited causing as little disturbance as possible.

Though it is likely that all the Knowes of Trotty have been explored by barrow hunters of the past, this mound has been the one that has been most fully explored. The mound was first excavated in 1858 by the proprietor of the farm, and he found a stone cist with human bones, 27 amber beads and four remarkable paper thin gold discs inside. This excavation left a lot of damage though. A later dig in 2006 (pictured) revealed much more but was hampered by the need to remove and examine the soil dumped back into mound by the Victorian explorers.

Much can be deducted from the burial mound at the Knowes of Trotty. The four gold discs, each with a hole in the middle, have been assumed to be button covers. Though the gold came from Scotland, the decoration on these discs were similar to buttons found in Wessex – which drew archaeologists to conclude that there must have been an exchange of ideas from Southern England all the way to Orkney.

The bones found here were charred, and a geophysical survey in 2001 indicated that there were lines of cremation pits around the largest mounds at the Knowes of Trotty. It also revealed a Neolithic building which had stood here 1500 years before the Knowes of Trotty were in use. The beads found within the barrow were once part of a necklace of a style that a female would have worn. The amber necklace and the button covers indicated that this individual was obviously of high status within the nearby Bronze Age society – gold was rare indeed!

We are unsure of what rituals took place at the Knowes of Trotty – perhaps after cremation, remains were then put into the barrows. Perhaps each mound was a doorway into the world of the dead. Certainly the Knowes of Trotty continued to leave an impression on later Orcadian society and folklore; the name means ‘the mounds behind the marshes where the trowies live’. Mounds and burial chambers were often thought to be the homes of terrible creatures – trows, trowies or trolls. This must have seemed like a Trowie city.

As my family talked about leaving, my only regret was that there weren’t better signposts, or an information board. The dig of 2006 has now been covered up and I would have appreciated a picture of the Knowes of Trotty in previous times to help my imagination visualise the importance of the site.

We made our way back drunkenly though the long heather, a walk that got easier as the heather parted to make way for a rough track, and then duckboards, and then a farm track and finally tarmac. We arrived back at the car delighted to have found another great walk and a brilliant piece of Orkney – a hidden peaceful archaeological secret under a heathery hill and a big sky. 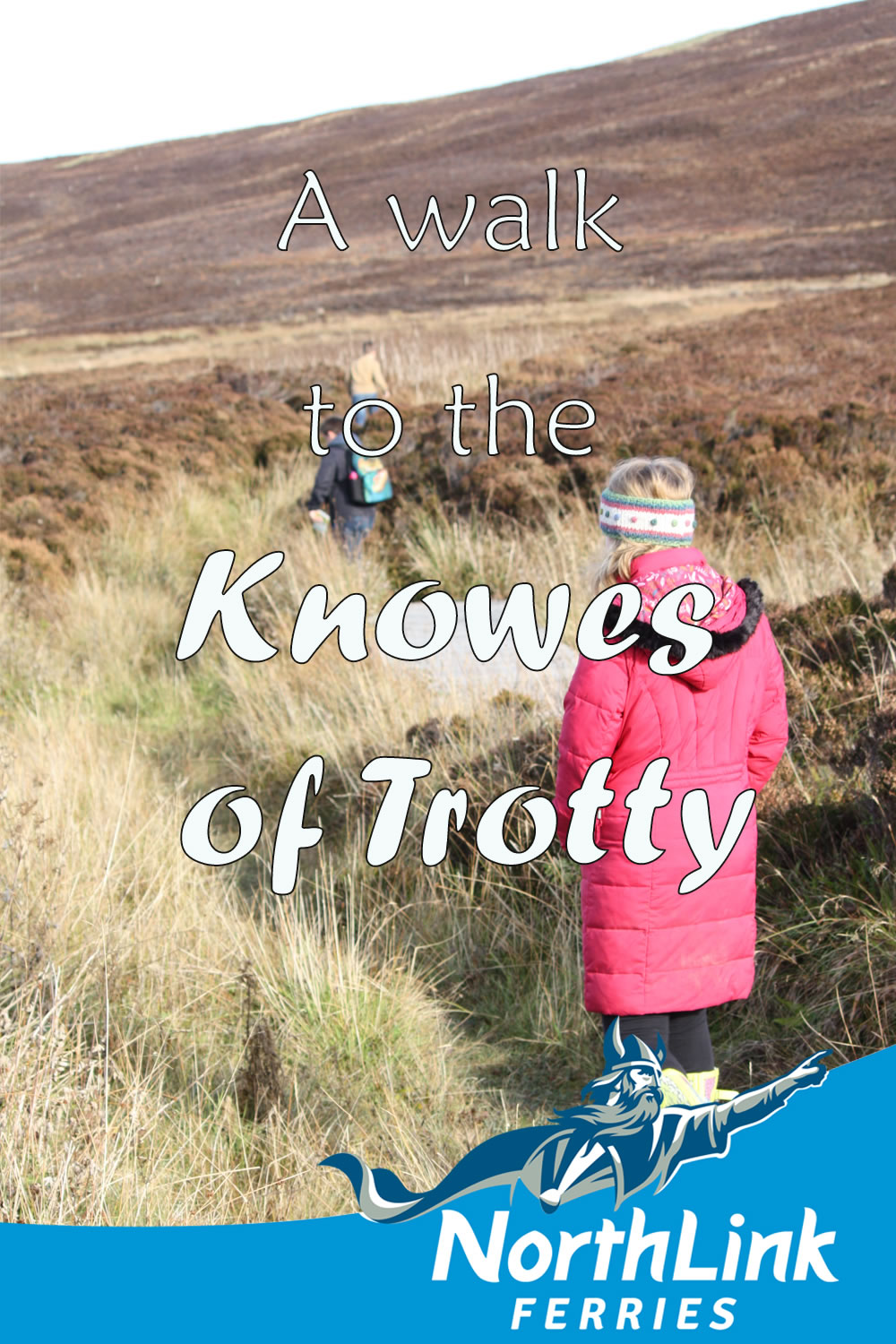