We recently spent a marvellous afternoon at Ness Battery, a wartime coastal defence station, which sits on the shore of Stromness looking out to Hoy Sound.

The shells could pierce the side of an armoured ship and hit targets 7 miles away. If cliffs weren’t in the way, the guns of Ness Battery could have struck the Old Man of Hoy!

We met our tour guide Andrew Hollinrake at the car park along Stromness’ west shore. Andrew does a brilliant job explaining what life must have been like manning the two massive guns at Ness Battery.

Though there are six fascinating facts about Ness Battery here, we’d highly recommend booking a tour with Andrew at http://www.nessbattery.co.uk/ for the complete story. At only £6 per adult, the tour is superb value for money!

Scapa Flow is a large area of deep water, enclosed by the south islands and mainland of Orkney. During both the First and Second World War, it was chosen as a safe anchorage for the Royal Navy.

Though most shipping entered Scapa Flow from the south, coastal gun batteries were set up to protect the western entrance. During the First World War, these consisted of several large guns facing seaward.

2) It was part of a group of six gun batteries

Early in the Second World War, there were attacks on HMS Royal Oak, HMS Iron Duke, and the faint drone of German bombers was constantly heard in the skies. Orkney defences were beefed up and the gun batteries built to protect the western approach were called the 534 Coast Regiment.

These six were Ness Battery, Skerry Battery (near Moaness on Hoy), Graemsay Battery (by Hoy Low Lighthouse on Graemsay), Links Battery (close to the Point of Ness in Stromness), Houton Battery (in Orphir) and Scad Battery (between Moaness and Lyness on Hoy).

3) The tallest building served many purposes

At Ness Battery, there are two gun emplacements which face out to sea, wooden accommodation huts and a tall concrete building. This building was the Battery Observation Post and Fire Command.

All the gun batteries of the 534 Coast Regiment received directions about where to fire from here. The powerful searchlights on the shore which swept the surface of the water were also controlled from the building. The final role of the Battery Observation Post and Fire Command was to look for pre-approved signals from friendly shipping. If a signal wasn’t received from a ship, it might be approached by an inspection boat, or even receive a shot across the bow.

Andrew tells a good story about the day the ferry to Orkney received a warning shot!

Though the two 6-inch Mark VII guns at Ness Battery are now gone, the large circular concrete housing gives an idea of how huge they must have been.

The guns weighed 7 tonnes and each shell fired weighed 100lbs. The shells could pierce the side of an armoured ship and hit targets 7 miles away. If cliffs weren’t in the way, the guns of Ness Battery could have struck the Old Man of Hoy! Standing close to the guns must have been earth-shaking.

To protect them from aerial attack, concrete shields were built around the guns.

5) There is the most amazing mural in Ness Battery

The wooden accommodation huts which housed 300 men are still in place at Ness Battery. There is a cookhouse and mess hall also.

Inside the mess hall there is a mural which depicts the English countryside with thatched cottages, a windmill, and a gypsy camp. It was painted by A.R. Woods – Aquilae (Latin for eagle) Robert Woods – who came from Willesden in London. In May 1944 he was posted to the 534 Coast Regiment for 18 months.

During wartime a vast number of service personnel arrived in Orkney, and the winters would have been tough for the homesick troops. A.R. Woods’ mural, an escape from the modern world, would have provided some comfort for them. It is worth visiting Ness Battery to see the mural alone!

6) Ness Battery was in use long after the war

After the war ended, Ness Battery continued to be used by the armed forces. The guns were removed in 1955. A helipad was installed by the Northern Lighthouse Board in the 1970s. Then, in 2001 the Ministry of Defence sold the site to the Orkney Islands Council.

These days MV Hamnavoe sails past Ness Battery on her journey between the Scottish Mainland and Stromness. From the deck of the ferry, passing the empty gun emplacements and imagining the 6-inch guns being trained on targets in these waters is a little intimidating!

We hope you’ll take a tour around Ness Battery. For times, prices and to book, please visit http://www.nessbattery.co.uk/ 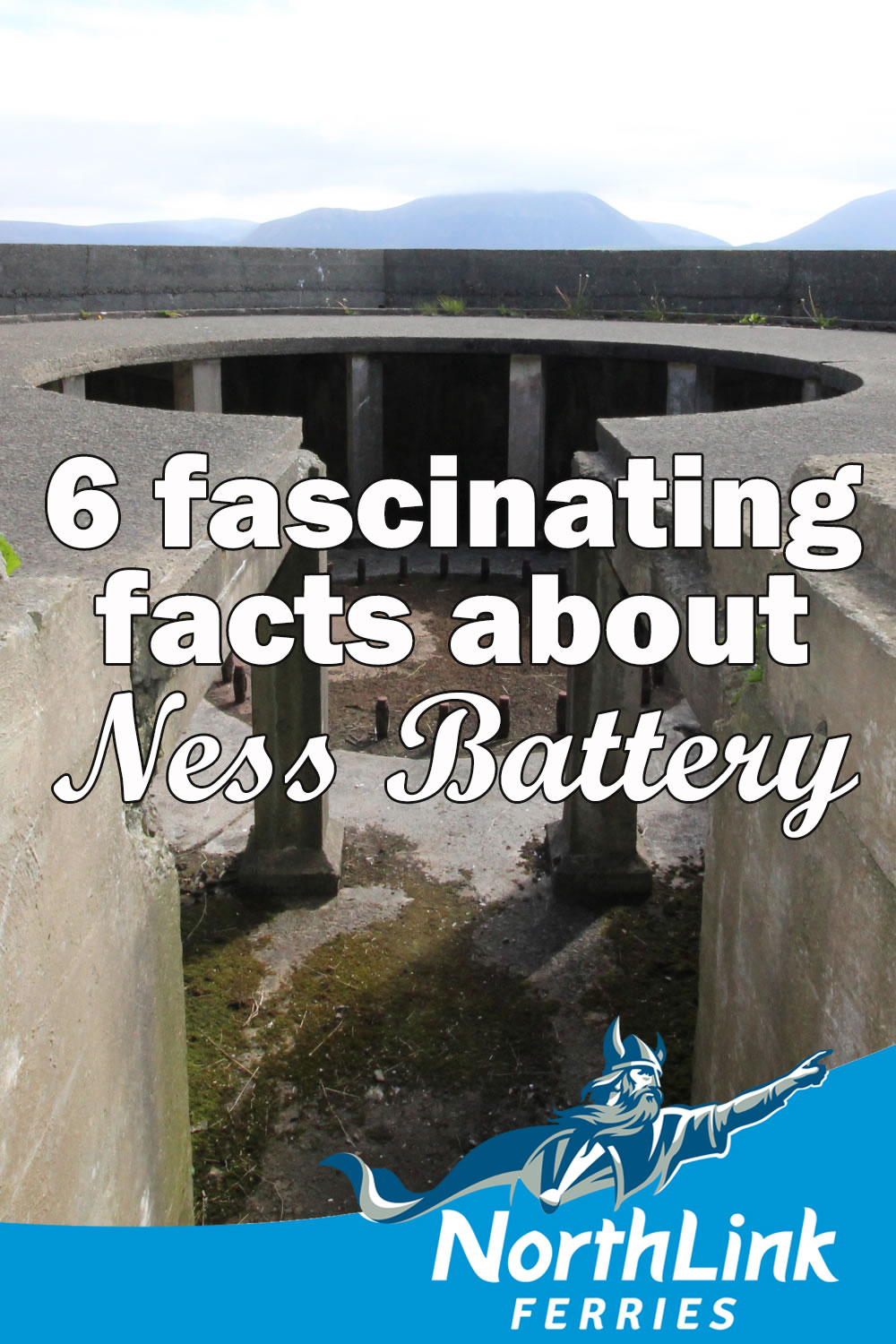 Graemsay is a lovely green Orkney island that sits between Stromness and Hoy. We spent a fabulous day walking the coastal path and finding lighthouses, a wartime battery and wildlife in abundance. Discover 8 reasons why you should visit Graemsay!

Things to do in Orkney in the evening

Orkney has much to see during the daytime, but you may be left wondering how to occupy yourself in the evening. Check out our recommendations on the best things you should do in the evenings when visiting Orkney.