Our trip to the Barony Mill

It was a bright and sunny day when we travelled to Birsay to visit the Barony Mill. Despite having lived in Orkney all of my life, I had never visited, so I took my family of four, including Robbie (9) and Milly (12) on the strength of some very positive TripAdvisor reviews.

“Bere has been grown in Orkney for human and animal consumption since Neolithic times; it was found within the rubbish tips of Skara Brae.”

As we parked up, another group of folk were leaving, and we would have the place to ourselves during our visit! The Barony Mill was built in 1873 and it’s a very handsome building, still in operation, which is nestled within the dip of a hill; perfectly situated to harness the power of the water flowing from Boardhouse Loch.

We received a warm welcome in the mill by the guide, Arthur Cook, and the tour, just for the four of us, began! We were first shown the grain in different stages of production; the children were also given the grain to hold and feel. At the Barony Mill, beremeal, an ancient form of Barley, which is ideally suited to grow in Orkney, is still milled every winter. Bere has been grown in Orkney for human and animal consumption since Neolithic times; it was found within the rubbish tips of Skara Brae!

Then we were shown the three sets of mill stones; the shilling stones, the beremeal stones and the oatmeal stones. The oatmeal stones are made from French burr, which is a very hard freshwater quartz stone, quarried at La Ferte sous Jouarre, 20 miles from Paris. The enormous cost of mill stones was a debt which was passed from a miller to his son. This was where the saying ‘a millstone around your neck‘ came from.

After climbing two stories of wooden stairs, we were shown the kiln. This was where the grains were spread out to left to dry. As the floor is ventilated to let heat from below rise up and through it, you can see the embers of a fire below; which is quite an odd sensation.

The fire was fuelled by previously-shelled husks of grain; this creates odourless smoke. The drying process was judged to be complete by the amount of condensation visible on the mill window!

Robbie was delighted when he was asked to start up the mill, and he pulled on a lever to channel the water through the sluice gates and over the top of the waterwheel. Milly meanwhile pulled on another lever which started turning the three huge millstones! It was quite something to see the mill come to life!

At this point in the process, the Kiln dried grain would be taken to the shilling stones. The shilling stones are just close enough together to rub and cut off the outer husks of the grain. Both the husks and the grain fall to the ground floor, where the first fanner blows away the husks (to be used in the fire for drying).

The grain goes to the second fanner (pictured above) for further cleaning and is then dropped to the oats grind stone to be ground and then sieved. For beremeal, the meal is then taken to the beremeal stones to grind into the finest flour. It was explained to us that the gap between the beremeal stones is as thin as cigarette paper!

We went out to see the waterwheel in operation, and it was an awe-inspiring sight!

113,000 gallons of water per hour from the Boardhouse loch flows over the wheel; this velocity and the weight of the water causes the wheel to turn. In an Orkney winter there would be no shortage of water to power the wheel!

When we went back inside we went to see the gears and cogs turning. It was quite something, and fairly noisy too. The tour guide explained to us about what life as a miller would have been like, and the maintenance tasks the miller would have had to do to keep this amazing machine working.

Our trip to the Barony Mills really was a fascinating one. I spent much of my childhood on a farmyard, playing in old Orkney byres, and this old wooden building with its creaking floorboards was very familiar to me. The kids loved the experience and made friends with Cedric, the Barony Mill cat!

On our way out we spotted some products made with beremeal that you can buy; including beer, bannocks and shortbread. We purchased some shortbread and it was delicious! You can also buy a bag of beremeal which has been ground on the premises and a recipe book to try out some traditional recipes for yourself! Bannocks (pictured below) used to be a staple part of an Orcadian’s diet, and in the past, home-brewed ale made with malt from the mill was much easier to come by and to afford than tea.

We left a donation, and went back out into the sun. The guide had explained that the Mill received more visitors on wetter days and when folk are making their way back from the Brough of Birsay. However the children had had a fantastic time and I would recommend the Barony Mill as a must-see to any visitor to Orkney – it allows you a chance to see, smell and taste a unique aspect of Orkney’s past.

On our way back to the car, Milly and Robbie enjoyed spotting fish in the burn. That, along with shortbread in the car on the way home, sealed the deal; we had discovered another way to have a great day out in Orkney!

The Barony Mill is run by the Birsay Heritage Trust. Tours are free, but donations are welcome. It is open seven days a week from May to September, from 11:00 to 17:00.

With grateful thanks to Sue Bright for many of the images used in this article. 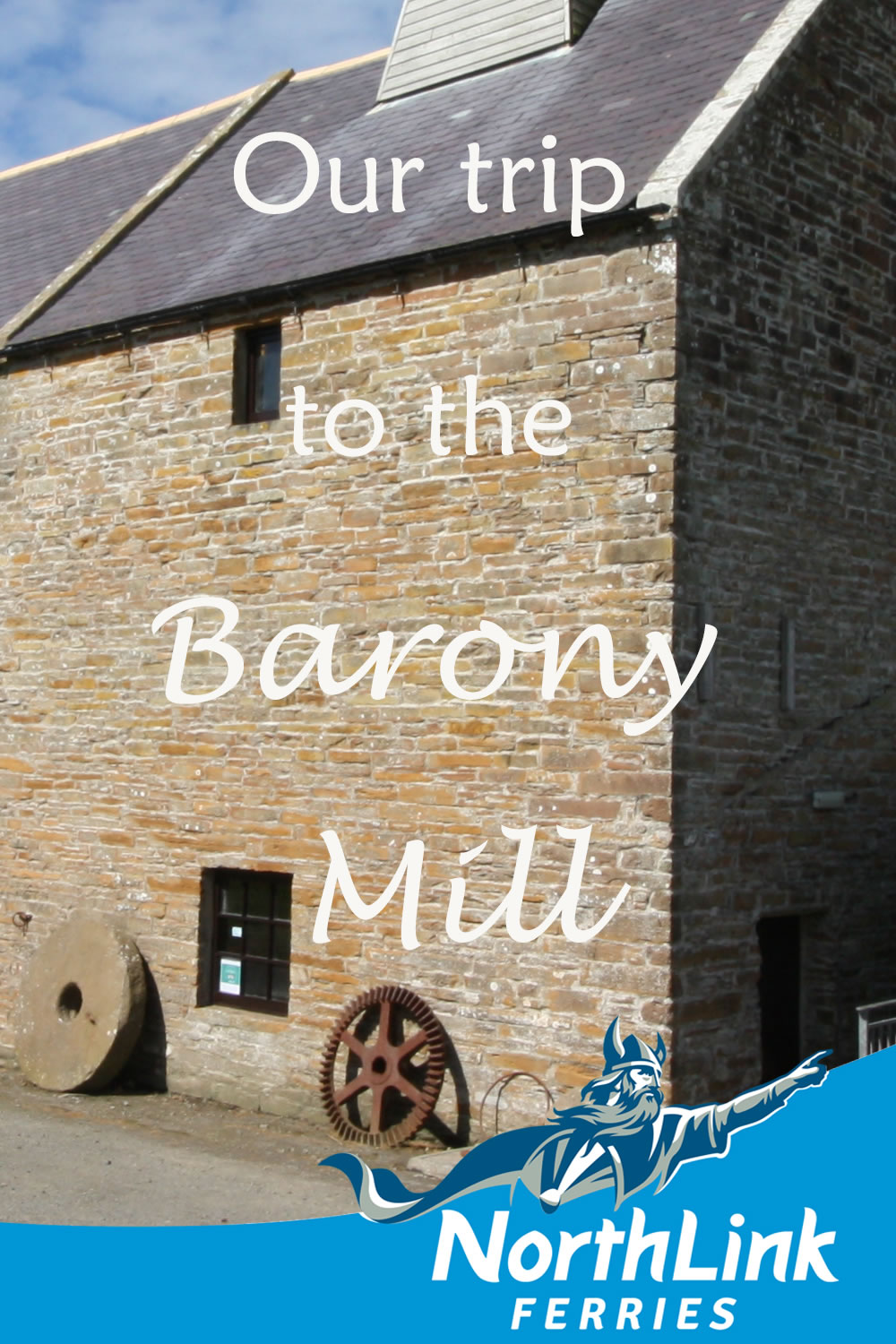