Our trip to Wyre in Orkney

It was a sunny but windy April day that we decided to visit the Orkney island Wyre. My cousin Danny and son Robbie joined me, catching a midday ferry for an afternoon adventure on an island none of us had ever visited before.

In the Orkneyinga Saga, Kolbein Hruga, or Cubbie Roo, was said to be a powerful warrior and ‘the most outstanding of men’. His name hrúga suggests that he was a big ‘heap’ of a man. In the centuries to follow, the residents of Wyre descended from him were all said to be very tall.

We were keen to explore Cubbie Roo’s Castle, and see The Bu, childhood home of Edwin Muir.

We caught an Orkney Ferries ship from Tingwall in the north of the Orkney Mainland, and this vessel would sail to three islands in total, all of which sit very close to one another.

The first island the ferry would visit was Rousay; otherwise known as the Egypt of the North because of the vast number of archaeological sites there. Then it would continue on to Wyre, and then on to Egilsay, before heading back to the Orkney Mainland. The islands of Eynhallow and Gairsay also sit nearby but don’t have a ferry service.

When the ship arrived in Rousay, the largest of the islands, most of the passengers and vehicles disembarked the vessel. The ferry then turned 180 degrees and sailed a half a mile on to the Wyre pier, which is almost opposite the Rousay pier on the other island.

Only four passengers go off in Wyre, our party of three, and a tractor driver who drove off the ferry before us. Wyre is a very agricultural and fertile island.

Next to the pier sat a ferry terminal no bigger than a shed. A garden area and stone seat were nearby, and a rowing boat; its days on the sea over; it was now a planter and full of flowers. On the shore was hauled up the rusting corpse of a fishing boat. However there were no people to be seen; apart from the tractor driver disappearing into the distance.

There were plenty of sheep though; dotted throughout the rich green fields, many of them accompanied by lambs. Danny, Robbie and I walked on a gentle road which would take us the full length of the island; all two miles! There was a signpost to Cubbie Roo’s Castle, and that was the stop we were most interested in.

Robbie isn’t much of a walker, but luckily Wyre wasn’t too much for him. We reached the Wyre Interpretation Centre after a matter of minutes. This building was once a canteen for both the Stronsay fish factory and for the forces during World War II. The wooden structure was then acquired by the Wyre Community Association and moved to the island. Since then it has been used to host community events and hold information about Wyre’s history and heritage.

When we arrived at the Wyre Interpretation Centre it was clear that the building, whilst still accessible, was in the process of being renovated and this is great news for Wyre. That said, in its present state, there was a wealth of information on the walls, more than enough to satisfy the most dedicated historian.

We stepped out of the Wyre Interpretation Centre into the wind and sun, walking down a track towards the Norse Estate which included Cubbie Roo’s Castle, St Mary’s Chapel and the Bu farm.

The Bu was the childhood home of Edwin Muir, one of the great Scottish writers of the 20th century. Muir was born in Deerness in 1887 and moved to Wyre at the age of two. He spent 6 years in the Bu, but after rents were hiked up, Muir’s father had to move his family, first to another farm, then to the Orkney Mainland and then to Glasgow; which must have been a shock for the 9 year old. Within a few years of the move, two siblings and both parents were dead; Muir’s work remembers Orkney as an Eden of sorts.

The Bu is still a busy working farm. We passed it and a field full of noisy geese on the track to Cubbie Roo’s Castle.

Below Cubbie Roo’s Castle is St Mary’s Chapel; and we reached the graveyard first of all. This beautifully preserved chapel is a fine example of simple Norse Romanesque architecture. It was in use in the 1100s by Norse Christians, around the same time as Cubbie Roo’s Castle. Though St Mary’s Chapel has been roofless and empty since the 1700s, the cemetery is still in use. There weren’t many graves at all though; Wyre has always had a very small population; only 29 in 2013.

There’s an interesting stile built into the wall surrounding St Mary’s Chapel. This stile was rumoured to be built to allow folk into the kirkyard, but to keep cattle out.

We climbed a small hillock to Cubbie Roo’s Castle. I was very glad of a nearby interpretation board, as it gave us a good idea of what we were looking at. All that remains now are foundations but it was clearly once an impressive stronghold. Cubbie Roo’s Castle is small, but the thick walls of the square keep would have been very difficult to get into if you weren’t wanted!

There are no visible doorways, so Robbie, Danny and I had to climb up over a wall to get inside. The entrance to the castle was previously on the first floor; which is now gone. We were struck by the fine view from the castle. The inhabitants would have been able to see visitors from quite a distance off; and traffic on the sea would have been visible too.

Cubbie Roo is the local name for Kolbein Hruga, and he was quite a character; testament to how a big personality can live on for many years after they die. Here are some interesting facts:

Danny, Robbie and I enjoyed a biscuit and a drink as we surveyed this fine little island from Cubbie Roo’s stronghold. Then we set off again.

The name Wyre comes from the Old Norse Vigr, which means spearhead; and the island is shaped like this. When we were back on the road we began walking towards the very tip of the spear. Here we met the only island resident we saw during our time on Wyre; a farmer who greeted our hello with a nod of his head.

The road was uneventful; curlews flew in the sky above us, and oystercatchers peeped in the fields. We made it to the tip, the most westerly point, which is called The Taing.

This is a fine place to see Common and Grey seals, and there were a few out that day, sunning themselves on the rocks. There’s a loch nearby where eiders and arctic terns can be seen in the summer and great northern divers and long tailed ducks in the winter.

We walked back to the ferry, passing lonely farmhouses and many well-cultivated fields. With the hilly brown island of Rousay opposite us the contrast between the two islands was clear. There are very few chambered cairns on Wyre. There were five Neolithic houses found at The Braes of Ha’Breck, and a few burnt mounds and enclosures at Skirmie Clett. However, the finds on this island pale in comparison to the archaeological treasure trove on Rousay. Lovely green Wyre probably lost quite a few of its archaeological treasures because they were sited on fields perfect for ploughing, unlike much of heathery Rousay.

Island life must be tricky we thought. How difficult it would be to get a plumber if your toilet broke down; or an electrician if your wireless geed fae working. To live here you would need to be handy in many trades.

As we neared the ferry terminal, we were greeted by the curious fellow above; the sheep watched us from afar on his pedestal!

The ferry arrived from Egilsay, and we boarded to sail back to Rousay and then on to the Orkney Mainland.

It had been a very fine day and we were wind-burnt and tired but happy.

I hope that more folk will visit the windy and quiet island of Wyre, and discover these magical places: Cubbie Roo’s Castle, The Bu, St Mary’s Chapel and the Taing for themselves. 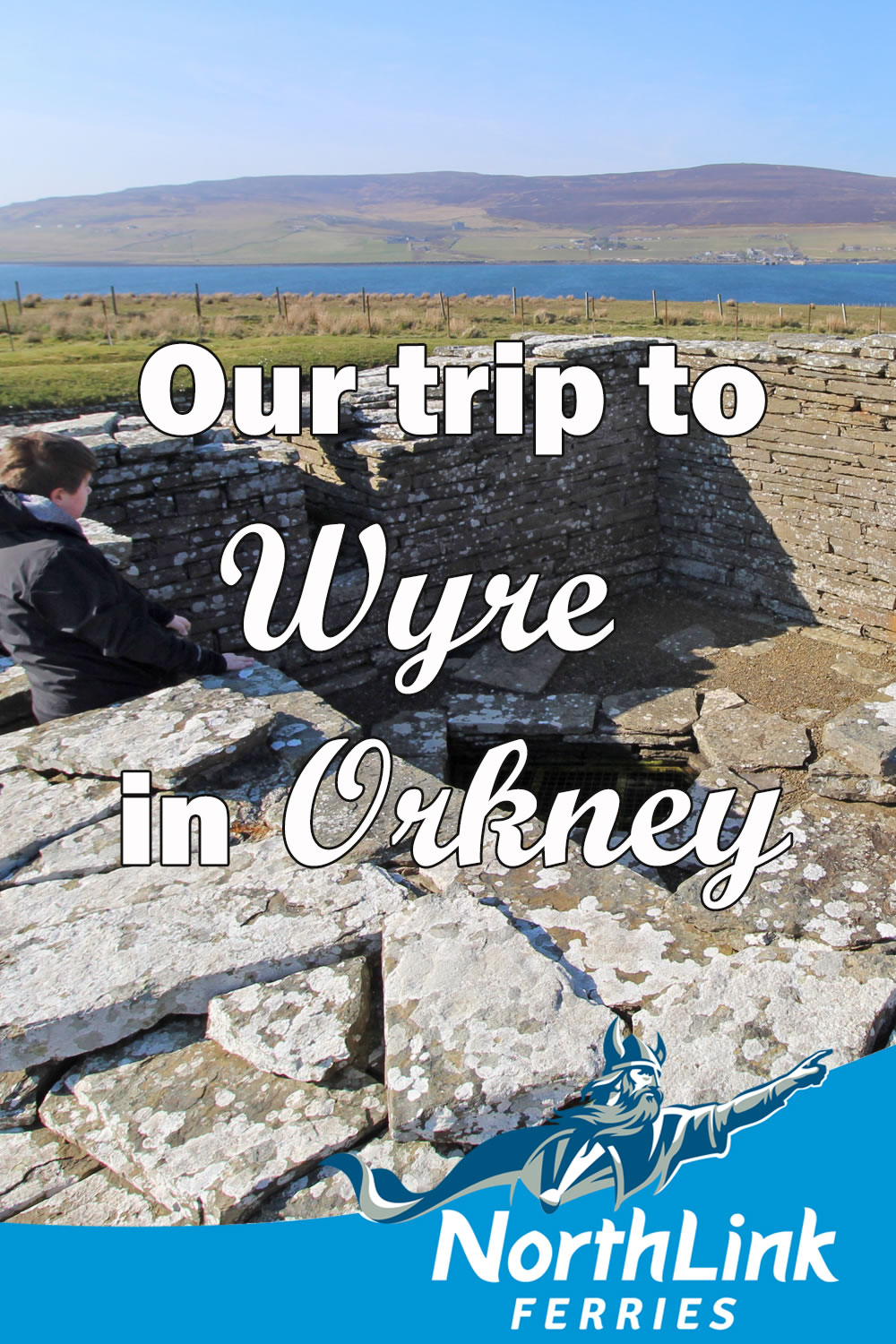 Header image: Cubbie Roo’s Castle, the Bu and St Mary’s Chapel on Wyre, one of the Orkney Islands