The Orkney and Shetland islands are places where you can spot comical, colourful puffins in the summer. This bird is called a Tammy Norrie in the Northern Isles and seeing one on a windswept clifftop is sure to put a smile on your face.

We have collected some well-known facts about puffins we hope you will enjoy, and a few lesser-known facts too!

1. Puffins have big beaks for a reason

Atlantic Puffins are seabirds from the auk family. They are black with a white belly and face, have a wingspan of 47cm to 63cm, a short tail, large strong orange feet (for landing and digging) and stand with an upright posture at 20cm tall. Puffins are distinctive because of their big colourful beaks. These are very large to enable puffins to catch many small fish (up to 10) at a time.

With birds, usually the male is more eye-catching than the female, however both male and female puffins are almost identical in appearance (though the male is slightly larger).

2. Their black and white feathers act as camouflage

Although humans usually find them on seabird cliffs, puffins spend most of their time swimming on surface of the sea. Here, their black markings and white belly act as camouflage. Predators from above struggle to see the black puffins against the deep blue of the water and predators from beneath the waves struggle to see their white belly against the sky.

3. Adult puffins need to eat a lot of fish every day

Puffins eat small fish, planktonic crustaceans, and small squid. In Orkney and Shetland their diet largely consists of sand eels. Adults need to eat around 40 small fish a day. They hunt by diving into the water. Using their wings for propulsion, they catch several fish with their beaks before surfacing. Puffins dive to up to 15m deep and can stay underwater for up to a minute. Puffins usually fish in the morning and so the evening is the best time to see them on the cliffs.

During mating season, adult puffins usually return to the same cliffs where they hatched and will nest in burrows on grassy slopes. Though puffins will dig their own burrows, very often puffins will occupy rabbit burrows, pecking and chasing the previous occupant out!

When you see a puffin on a seabird cliff you may be surprised to hear the noise they make, which is a little like a cow’s moo.

5. They can be easily seen in Orkney and Shetland during the summer

Puffins will arrive on the cliffs of Orkney and Shetland from April to August every year. They are amusing to watch and are quite tolerant of nearby humans. When puffins take off, they fly low and fast with rapid wing beats, and their landings are not always graceful!

The best places to see puffins in Orkney include the Brough of Birsay, Marwick Head, and in Westray, Noup Head and the Castle of Burrian. In Shetland, the popular places for puffins include Sumburgh Head and Hermaness in Unst. Unfortunately the largest colonies of puffins tend to be in offshore islands which are hard for humans to reach, such as Sule Skerry in Orkney, where there are 60,000 occupied burrows.

Puffins mate with the same partner for life, which is a romantic notion, but it really has more to do with their habit of returning to the same nest year after year! They reinstate their bond with a unique courtship behaviour, known as billing. This involves two puffins repeatedly turning their heads from side to side and clattering their bills together!

7. A puffin chick is called a puffling

Every year puffins will occupy a nest and lay just one egg. Both parents will look after the egg, which hatches after 40 days. Puffin chicks are called pufflings and they have grey and black feathers and a dull beak.

After six weeks of intensive feeding the puffling will make its way down the cliff to the sea, which is a precarious task, undertaken at night to avoid predators, as it cannot fly properly yet. Once a puffling has left the nest it will stay at sea for two to three years before returning to the cliffs as an adult puffin.

8. There is a bird with the Latin name Puffinus puffinus, and it is not a puffin!

The Latin name Puffinus puffinus belongs to the Manx Shearwater which in the past were called Manks puffins. Unfortunately, the Manks puffin was so-called because the word puffin (pophyn) was used to describe fatty and salted seabird meat. The Atlantic puffin received the name much later because it, like the Manx Shearwater, nests in a burrow.

9. Puffins have many predators to worry about

Puffins are small birds and as a result they are often bullied by larger birds and animals. Great skuas are known to harass them, sometimes hunting them for food, and often stealing their food. Black-backed gulls also attack them, and land-based predators such as cats, dogs, stoats and rats eat them also. Thankfully, in the UK and in most other countries, humans no longer view puffins as food.

In winter, puffins will go to sea and stay there. During this time, they moult and lose many of their distinctive markings. The colourful plating on their bills and their eye ornaments fall off and they become much duller birds in appearance. Puffins travel far during the winter months – birds from the Northern Isles have been spotted in the seas off Italy, Portugal, Spain, North Africa, and Newfoundland! 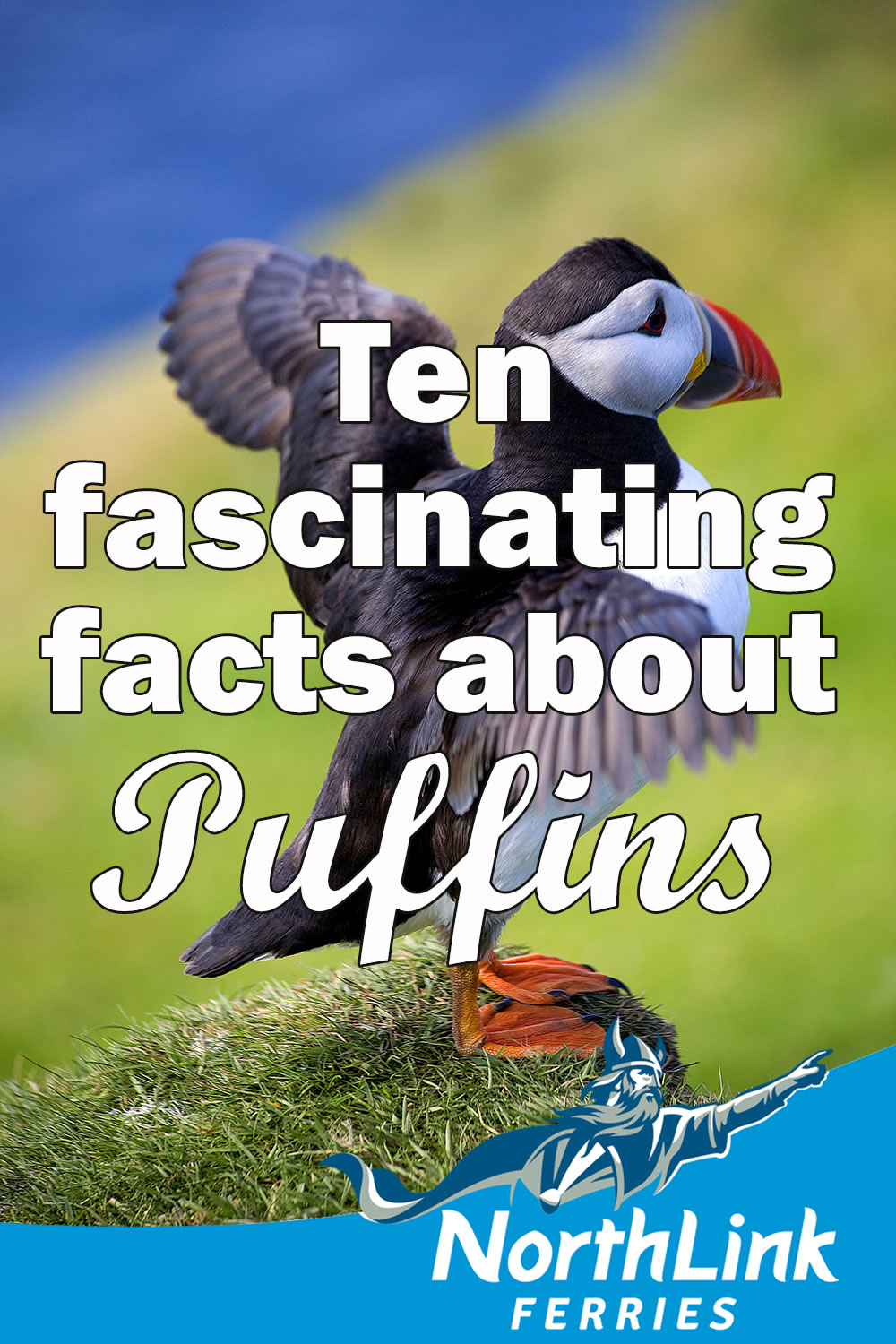