Around the shores of these lochs are some of the most impressive archaeological sites in the UK, and there are smaller places of interest well worth a visit too.

The Deepdale Stone stands on a hillside overlooking the Loch of Stenness. This is a Neolithic standing stone, and these were usually placed in significant spots, but the significance is lost now. The Deepdale Stone is located on private ground and once had a partner which was toppled by a previous landowner.

The Brig o’ Waithe is the point at which the Loch of Stenness meets the sea. The name comes from the Old Norse ‘vað’ meaning ‘wading place’ or ‘ford’. Before the current bridge was built in 1859 it was a treacherous place to cross. A nearby house was bombed in 1939 by German planes, and this caused the first British civilian death in the Second World War. The Brig o’ Waithe is a great place to see seals and otters.

Unstan Chambered Cairn was built between 3,400 and 2,800 BC and stands on the edge of the Loch of Stenness.

When this Neolithic tomb was excavated, several crouched skeletons were found in ‘chambers’, meaning that they were separated by stone partitions. There were also over 30 bowls with unique designs. This design was named Unstane Ware and similar pottery has been found in other Neolithic sites around Orkney.

There is evidence that Unstane was visited by Vikings and used by the Picts. See if you can find the lovely carving of a bird, thought to be a modern addition. Unstane Chambered Cairn is free to enter and usually empty so you may feel like an archaeologist discovering an unexplored tomb!

When the sea broke in

It is worth remembering that in Neolithic times the sea had not broken into the Loch of Stenness – this area was boggy land. The sea filled the loch was salt water around 1,500 BC and it is possible that many archaeological treasures were lost to the flood.

There is now a thin strip of land, connected by a bridge, between the Loch of Stenness and the Loch of Harray. Just before this bridge is a significant area, a headland and a prehistoric stone circle, the Standing Stones of Stenness. The name Stenness comes from the Old Norse, ‘Stone Point’.

The Standing Stones of Stenness

The Standing Stones of Stenness are four massive stones, built around 3,100 BC, each 30cm thick and up to 5m high. The circle was originally comprised of 12 stones. The purpose of this impressive monument remains a mystery, but it is possible that it was used for ceremonies or celebrations. Animal bones, charcoal and pottery were found nearby.

In the past a significant stone was here called the Odin Stone. This standing stone had a hole through it. Promises were made by holding hands through the gap. When a farmer smashed the Odin Stone in 1814 there was outrage!

Barnhouse Village is 150m to the north of the Standing Stones of Stenness and consisted of 15 small buildings which were occupied for 700 years, from 3,300 to 2,600 BC. Was there a link between the village and the standing stones? Did the buildings belong to priests who worshipped there or to those who built the standing stones?

Barnhouse is very similar to the Neolithic village of Skara Brae. Each building had a central fireplace, box beds and a stone dresser. Unlike Skara Brae, only the reconstructed lower walls of the houses at Barnhouse are visible now.

At the centre of the settlement is an open area where pottery was made, and animal hides were worked. Barnhouse fell out of use 450 years before Skara Brae did and appears to have been deliberately demolished. Perhaps this happened when the Standing Stones of Stenness were finished?

The Watchstone is a solitary standing stone next to the bridge between the Loch of Stenness and the Loch of Harray. Perhaps this imposing 5.6m tall stone pointed the way to the Ness of Brodgar.

The Ness of Brodgar

A recent discovery, the Ness of Brodgar was a group of important ceremonial buildings significantly located between two stone circles: The Standing Stones of Stenness and the Ring of Brodgar. These buildings were too big to be domestic structures and contained rich artefacts, including volcanic glass only found in the Western Isles and stone only found in Cumbria. They also contained an amazing collection of Neolithic art and painted walls.

The Ness of Brodgar was enclosed by a massive wall and was in use for nearly a thousand years, between 3,300 and 2,450 BC. At the end of its life there was a feast and a ceremonial destruction of the buildings here. The Ness of Brodgar was covered by dirt and plants and became forgotten about, hidden in the landscape.

The Ring of Brodgar

It has been supposed that the large stones were dragged here, sliding on seaweed and pulled by ropes. Other mysteries surround the Ring of Brodgar. Is it aligned to the sun, stars, moon or important buildings in the landscape? Some think that the act of building monuments and bringing together communities was as important as the monument itself.

Maeshowe is one of the most impressive Neolithic chambered tombs in Europe and it is found close to the east side of the Loch of Harray. Though it appears to be a grassy mound from the outside, it is quite a feat of ancient engineering on the inside. Visitors must crouch down a long passageway to enter, and this was built to be aligned to the midwinter sun.

Maeshowe Chambered Cairn was built in 2,750 BC possibly as a tomb for the most important Neolithic people.

In the 12th century it was broken into by Vikings who covered the interior with graffiti! This is another reason to visit as the runic carvings are quite stunning (though it is unlikely that a tour guide will give you the exact translation – the Norsemen used some foul language!) A picture of a sea serpent, a seal and a beautiful dragon were also carved into the walls.

On the edge of the Loch of Harray

Further round the shores of the Loch of Harray is the Merkister Hotel, and it serves delicious food and is a favourite haunt of fishing enthusiasts. This beautiful building in a lovely setting was once the home of poet and author Eric Linklater.

Finally, at the east side of the Loch of Harray, the Lochside viewpoint offers a spectacular view of both lochs, as well as the Ring of Brodgar and the Hills of Hoy and gives an idea of why the area was so special to people in the past.

The Lochside viewpoint is a great place to see wildfowl and even otters if you are quiet. We would particularly recommend visiting on a winter’s day when it is icy and still. 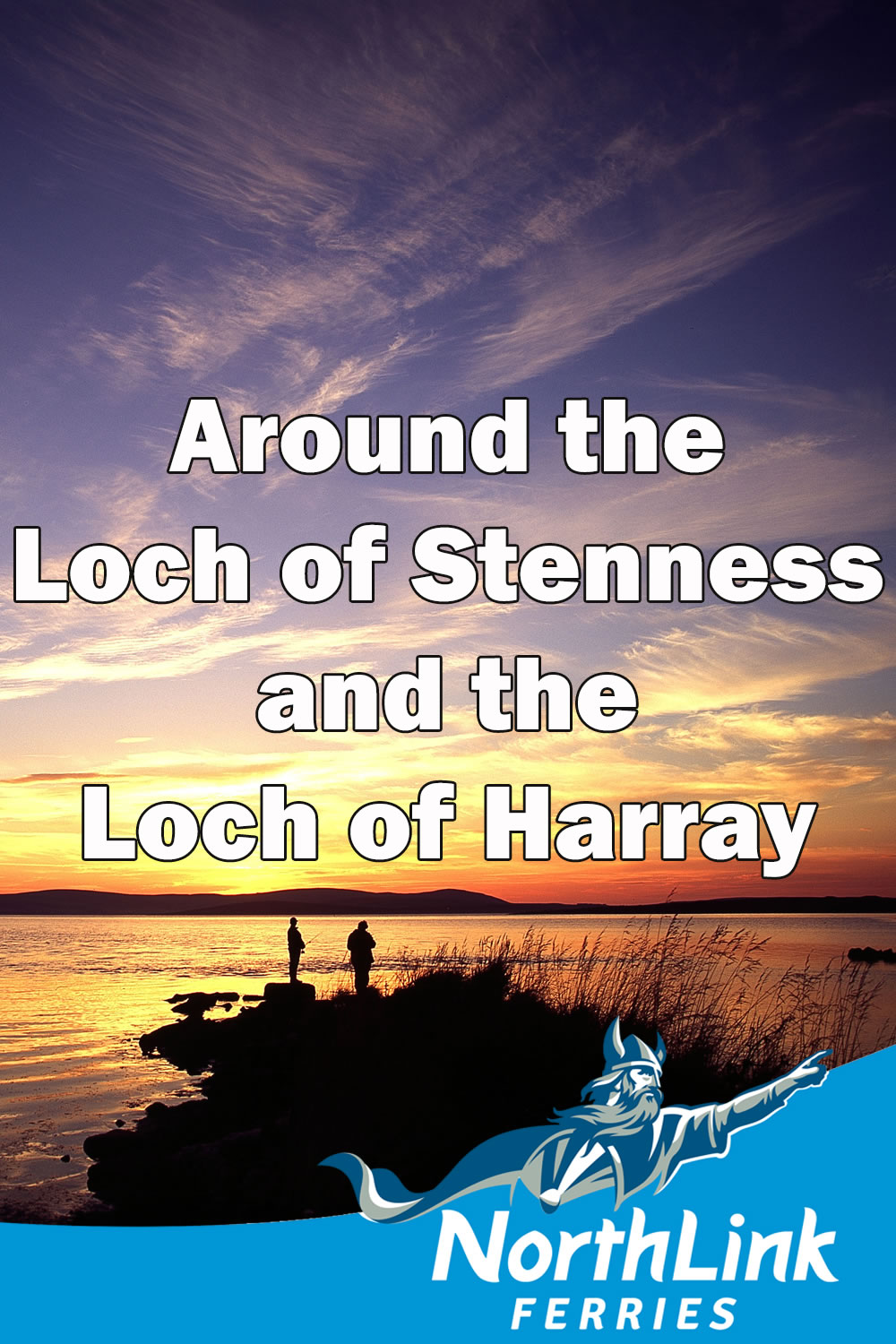