10 things to do in Fetlar

Throughout the summer, you’ll be greeted with swathes of scented meadowsweet, wild angelica, vibrant bog asphodel, sunny buttercups, eyebright and creeping willow. Be sure to spend time exploring the meadows, ditches, banks and moorland and enjoying the diversity of flowers the island offers.

‘Shetland Flowers’ by Paul Harvey & Jim Nicolson is a really helpful pocketbook while you’re in Shetland.

Fetlar is endearingly known as the Garden of Shetland, and it’s easy to understand why; the stunning landscapes, fertile valleys and diverse geology give rise to the most incredible display of flora and fauna throughout the summer months. Today, the island population sits at around 60 and the community is served by a local shop, school, heritage centre, public hall and caravan park.

Getting to Fetlar involves a two-ferry hop from Mainland Shetland. The first leg of the journey is across Yell Sound on the modern inter-island ferry, and the crossing takes about 15 minutes. From here, visitors drive through Yell to the ferry terminal at Gutcher. From Gutcher, there’s a regular daily ferry to Fetlar, which will take about 25 minutes. Booking is necessary for the Fetlar ferry; this can be done on the internal Shetland Ferries website.

Here are ten reasons why you should visit Fetlar.

1. Soak up the sun, sea and sand at Tresta Beach

Tresta Beach is outstandingly beautiful, flanked by the steep slopes of Lambhoga, it commands uninterrupted views across the Wick of Tresta and the North Sea beyond.

Not only is it outstandingly beautiful, but it is also one of five beaches in Shetland to have been awarded a prize in the Keep Scotland Beautiful beach awards.

Behind the beach, the peaceful Papil Water is a fantastic spot for trout fishing. Fishing permits can be bought from the Shetland Anglers Association who operate a simple permit system with a single price for visitors or locals. The pass costs £30 and allows the angler to fish throughout the season. Junior anglers (under 16) are free.

2. Discover the island’s history at the Interpretative Centre

Fetlar’s Interpretative Centre is the cultural hub of the island, packed with local history displays, folklore and a wealth of information about island life – this should be one of the first places you explore on the island.

Across the road from the Interpretative Centre is the beautiful mansion, Leagarth House. It was built in 1901 by Sir William Watson Cheyne, who developed safe antiseptic methods along with Lord Lister.

The Fetlar Interpretive Centre has excellent displays on Sir William Watson Cheyne and a dedicated publication detailing their contribution to medicine for sale.

3. Hike to the impressive natural arch at the Snap

Fetlar’s coastline provides some fantastic hiking experiences, and none more so than the Snap walk, which will take you from Funzie southwest towards an area known as the Snap. Along the way, expect to see an array of seabirds, including fulmars, terns and skuas and perhaps the odd seal or – if lucky – a passing whale! You’ll find an impressive natural arch rising from the sea below at the Snap with an almost gravity-defying presence.

Lisa Sumner lives and works in Fetlar, producing hand-crafted bags, belts, wallets, purses, journals, knitting belts, pet and equestrian items from her croft. Her workshop is open by appointment, and many of her items are inspired by the island’s natural landscape.

You can find out more at Lisa’s Leatherworks website.

5. Walk between Houbie and Tresta, discovering the island’s rich archaeology

Fetlar is packed with archaeology that dates back as far as the Neolithic, some 5,000 years ago. On this walk, between Houbie and Tresta, you will pass impressive soapstone carvings where Viking and Norse settlers shaped bowls from their surroundings to be fashioned into household cooking pots. Beyond this is the ruined remains of a 2,000-year-old Iron Age broch with impressive ramparts and a prominent coastal outlook.

6. Look out for red-necked phalaropes on the Loch of Funzie

Scan the waters of the Loch of Funzie for the distinctive red-necked phalarope, a small wading bird that breeds in the area. Fetlar is the best place in the UK to see these birds that overwinter in the Galapagos islands!

An RSPB hide at the Mires of Funzie provides the perfect spot to look out for them, and other wading birds, in their natural habitat. Visitors are reminded not to disturb any of the island’s breeding birds.

A geowall installation at the Loch of Funzie illustrates the island’s rich and varied geological history. Shetland is a designated Unesco Geopark, famed for its outstanding geology and landscapes that have been shaped over millions of years.

7. Breathe in the scented wildflowers of a summer evening

Undoubtedly, summer is the best time to visit Fetlar. With the long midsummer days, the sweet-smelling wildflowers are at their best, carpeting the island in a tapestry of colour and carrying the scent of summer across the island on the breeze.

Throughout the summer, you’ll be greeted with swathes of scented meadowsweet, wild angelica, vibrant bog asphodel, sunny buttercups, eyebright and creeping willow. Be sure to spend time exploring the meadows, ditches, banks and moorland and enjoying the diversity of flowers the island offers.

8. Discover the site of a Viking boat burial

Fetlar’s boat burial site is reputed to be the final resting place of a Viking man who had washed ashore during a storm after the rest of the ship’s crew were washed away. He requested that, upon his death, he be buried with his boat and treasure. When he died, his wishes were honoured, and he was given a traditional Viking boat burial.

Time Team excavated the site (often referred to as the Giant’s Grave) in 2002, uncovering many iron nails – but no skeletal remains. A beautiful 9th-century tortoise-shaped brooch was found, indicating that this may have been a Viking woman. This intricate brooch is now part of the Shetland Museum & Archives collections.

The site has since been covered over, but it is awe-inspiring to consider that this was once a place where Viking and Norse settlers first made landfall on UK shores.

9. Dance with the trows at the Haltandans stone circle

Haltadans, believed to date to the Bronze Age, is a circle of 38 stones surrounding two central stones in the centre of the ring. This unassuming stone circle has many folklore stories associated with it. One suggestion is that the circle represents a fiddler and his wife (the central stones), and the surrounding rocks are trows [trolls] who, whilst dancing, were startled and turned to stone with the rising sun.

Trows, popular in Shetland folklore, were a cheerful and mischievous race who had a great love of fiddle music. The name Haltadans, according to etymologist Jakob Jakobsen means a ‘lame or limping dance’, so-called because, according to Shetland folklore, trows and fairies were often said to limp when they danced. Jakobsen says that the two central stones represent the fiddler and his wife, petrified as they kept dancing when the sun rose. Further evidence of this musical influence can be found at a cairn a short distance away, marked on the OS map as the Fiddler’s Crus.

One of Fetlar’s most striking buildings is the imposing remains of the once-grand Brough Lodge. Brough Lodge is unlike anything else in Shetland; built by landowner Sir Arthur Nicolson in a Georgian Gothic style, it sits in stark contrast to the typical haa houses scattered throughout Shetland. Built in 1820, it represents an altogether darker period of Fetlar’s history.

Fetlar, like much of the Highlands and Islands, was severely affected by the clearances – a period where tenant farmers were evicted from their homes to make way for large-scale sheep farming. Sir Arthur Nicolson was the driving force behind the Fetlar clearances. At its height, the island supported almost 900 people – today, the population is 60. Following the evictions in the 1820s, Fetlar’s population never fully recovered.

Brough Lodge had everything a grand house of that time should. It boasted, among others, a drawing-room, library, butler’s pantry and a counting room (where Nicolson dealt with the rents from the island) – it also had an astronomical observatory, as what grand house wouldn’t? It’s bittersweet to see this once proud house, a key player in so much misery across the island, now fading into history.

Gruting’s roundhouse is also worth a walk. The building is not prehistoric, but rather the bolt-hole of our 19th-century eccentric, Sir Arthur. The roundhouse has a curious story and was built after the valley was cleared in the 1840s. Sir Arthur Nicolson decided to make a summer house secluded from his family home at Brough Lodge. Designed in a French fashion, the lower part is stone, and the upper floor was wood.

Once complete, on his horse Jolly, Sir Arthur made his way to the newly constructed summerhouse to spend the night. The evening went well until Sir Arthur went to bed, where he was then kept awake by an incessant banging and knocking which echoed through the darkness outside. Eventually, the noise became too much to bear, and he abandoned his bed, galloping back to Brough Lodge, much the wearier of his stay. The minister at the time commented that the noise was from spirits of the crofters he had evicted, who had not departed the valley but had come back to haunt him for his misdeeds against them. 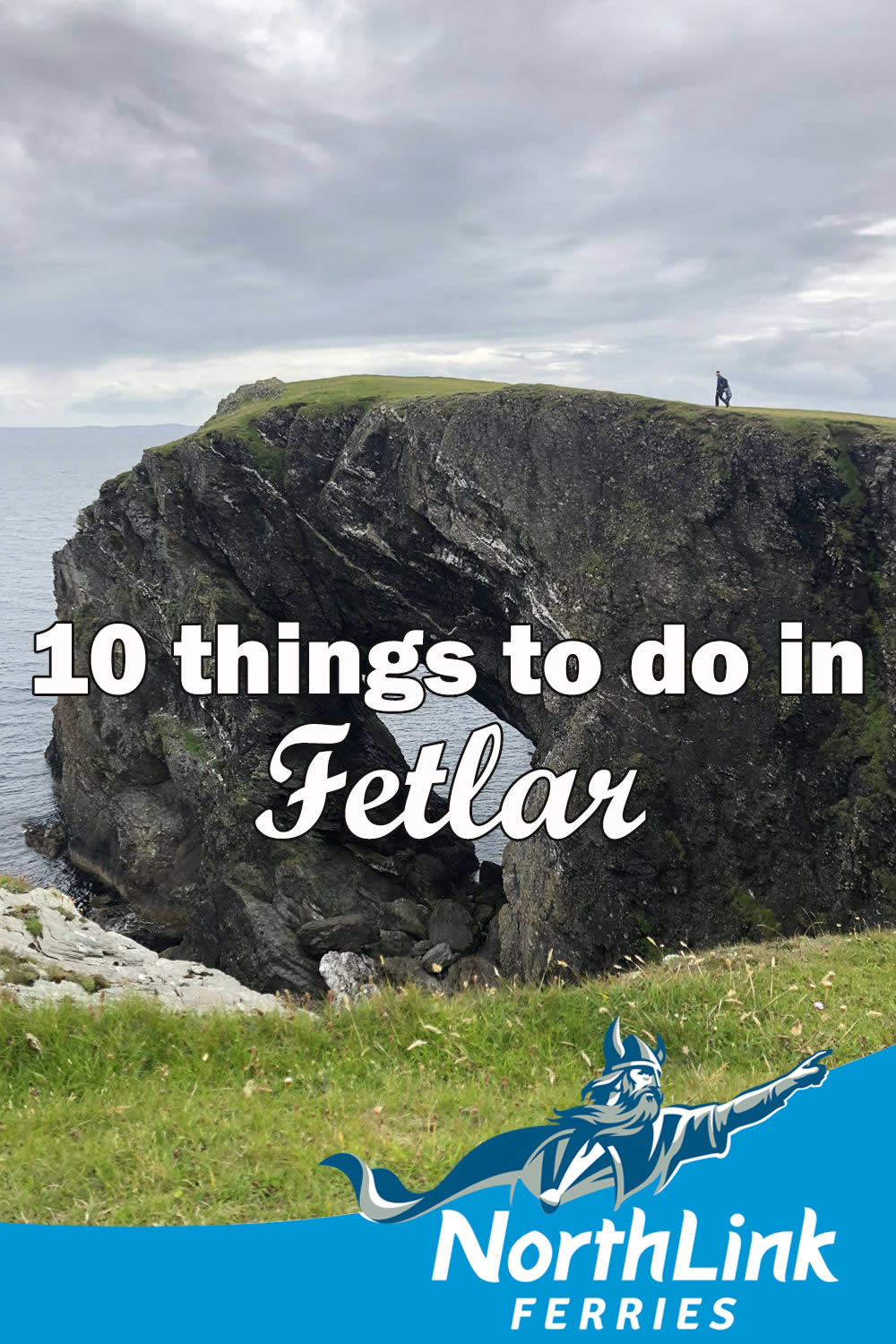