Bressay has a lovely Up Helly Aa celebration. Unlike other Shetland Fire Festivals, the procession is open to all and if there enough torches, you can join in and carry a torch on the night.

Please note – because of COVID-19 many of these Fire Festivals have been cancelled in 2020, 2021 and 2022. To view Up Helly Aa dates, please visit www.northlinkferries.co.uk/uphellyaa

Shetland’s first fire festival of the year takes place in what was once Shetland’s former capital. The event begins at 19.00 when between 200 and 300 guizers lead a torch-lit procession through the village, before setting a Viking Galley alight on the sea at Port Arthur! Afterwards the guizers will visit five local halls: Bridge End, Hamnavoe, Tingwall, Scalloway Hall, Scalloway Legion and Scalloway Boating Club for a night of dancing, fun and reestit mutton soup!

Uyeasound Up Helly Aa takes place in the south of the island Unst. There are just under 200 guizers and two galleys! One is a decorative galley, used every year for the parade. The second is a burning galley; set on fire on the beach at the Shalder Taing, Uyeasound. The procession starts at the Uyeasound Galley Shed and after the burning the events of the evening move to Uyeasound Hall.

Northmavine Up Helly Aa is a fire festival for Eshaness, Hillswick, Ollaberry, North Roe and Sullom. As well as a burning galley, in Northmavine a sailing galley is constructed, and the Jarl Squad take to the water if conditions are favourable! The procession starts at the Hillswick Hall and leads along the main road to the loch at Urafirth. Halls open later that evening are Ollaberry, Hillswick and North Roe.

The island of Bressay lies directly across from Lerwick harbour and the ferry there takes 7 minutes. It has a thriving community and a lovely Up Helly Aa celebration. Unlike other Shetland Fire Festivals, the procession is open to all and if there enough torches, you can join in and carry a torch on the night. There are usually 100 guizers who take part, beginning at the Bressay Hall, and the burning of the galley takes place on ground near the Old Manse. Celebrations follow in the Bressay Hall!

Cullivoe Up Helly Aa takes place on the island of Yell. Here the galley is led from Cullivoe hall to the marina. There it is set alight and floated out to sea. Celebrations take place after in the local hall, and in the school. The following day there is Hop night for more entertainment and dancing. Then the following week the Guizer’s Return gives the guizers a chance to watch each other’s acts.

Norwick Up Helly Aa takes place on the island of Unst and it is Shetland’s most northerly fire festival. There are around 100 guizers and around a dozen squads march down the Floggie road to the burning site on lovely Norwick beach. The North Unst Public Hall (also known as Haroldswick Hall) is the venue for celebrations, skits and a supper dance for many hours later.

Perhaps the loveliest Shetland fire festival is Walls Junior Up Helly Aa, which has been organised by the Brownies for over 25 years. Walls is a village on the west side of the Shetland mainland and the whole community take part, creating amazing costumes for the creating costumes for the Jarl Squad of young girls and boys. After a day of visitations the peerie Jarl Squad march with a lovely gallery from the local hall to the kirk-yard (adults hold the flaming torches along the way). Then they set fire to a specially-made metal galley, full of wood! Afterwards there is a night of fun in the Walls Hall.

South Mainland Up Helly Aa is quite a recent festival, only having started in 2010. The five areas it covers take turns to host the event; these are Gulberwick and Quarff, Cunningsburgh and Fladdabister, Sandwick and Hoswick, Bigton and Levenwick, and Dunrossness. As a result the locations for the evening procession and burning of the Galley can differ from year to year. Burning sites include St. Ninian’s Isle Ayre, Grutness beach, Mail beach, Hoswick beach and Gulberwick beach. Halls used include Gulberwick Hall, Cunningsburgh Hall, Sandwick Social Club, Bigton Hall and the Ness Boating Club. SMUHA also has a very pleasing acronym to say and, in Lesley Simpson, had the first ever adult female Guizer Jarl!

Delting Up-Helly-Aa is the last of all the Shetland Fire Festivals. This community event started life in 1970 as a festival for high school pupils. In 1982 it became a senior event celebrated by the youngest to the oldest members of the communities of Mossbank, Muckle Roe, Vidlin, and Voe. Squads muster at the Brae Galley Shed and then march through Brae to the Delting Boating Club where the galley is set ablaze. The final fiery Shetland event of the year always goes out with a bang! 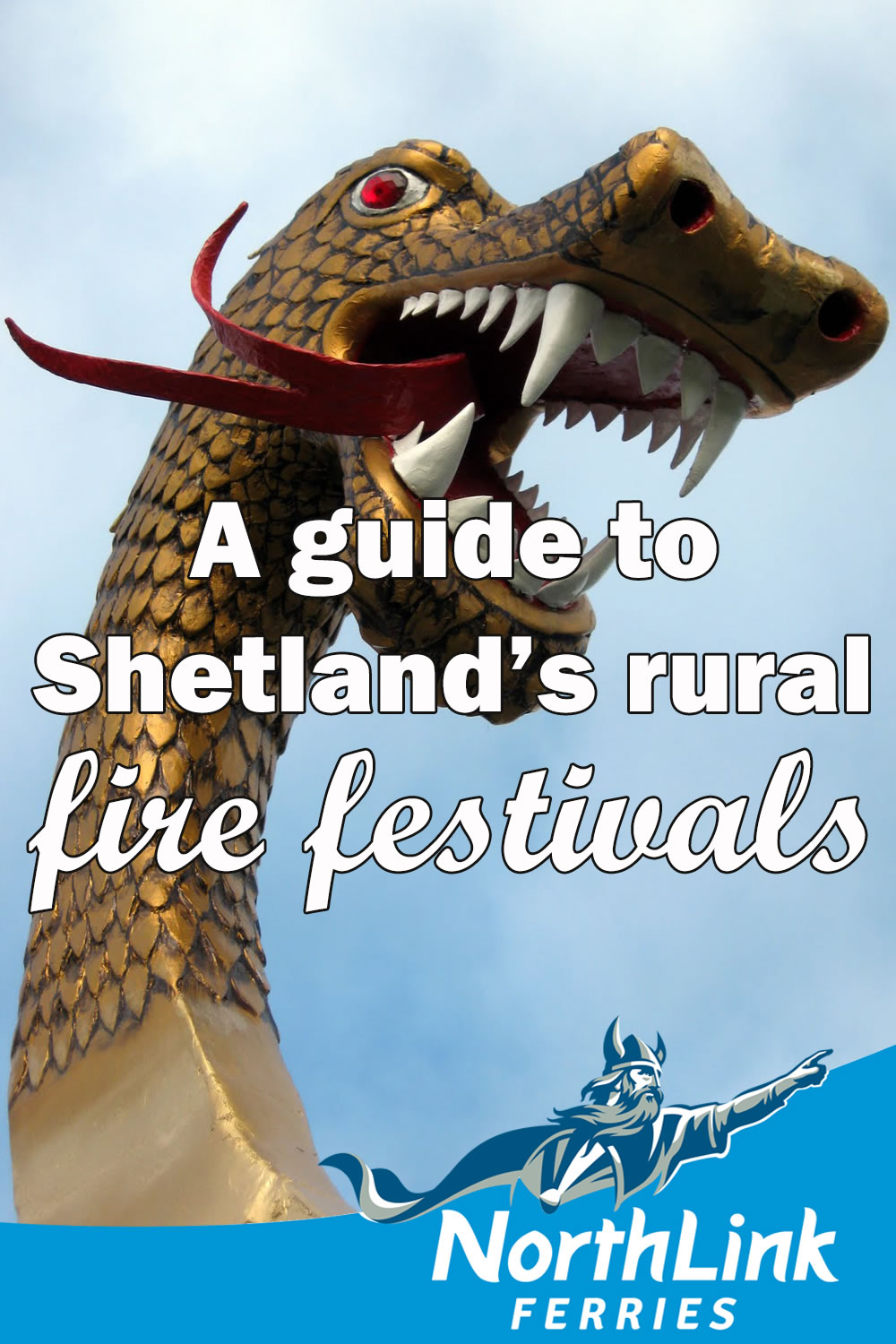