All aboard the Dim Riv

Boats have always been part of life in Shetland, and when the first Vikings arrived in the ninth century, Norse culture irreversibly changed the islands. Over forty years ago, a replica Viking longship was built, called the Dim Riv. Since then, it has been a focal point along Lerwick’s waterfront, offering trips around the harbour and giving people a chance to sail on a Viking longship. It is run and crewed by volunteers.

The Dim Riv is looked after by a group of volunteers who are immensely proud of her, and it is this group that make sure that she always looks her best. She is stored in her own boat shed in the town during the winter months and any repairs/renewals are carried out during this time.

We interviewed Graham Nicolson, the current chairman of Da Longship committee, the first Chair being his Father Jim Nicolson.

Q. When was the Dim Riv built? We would love to hear some of the history of this beautiful longship.
A. The Dim Riv was launched in June 1980 and was originally conceived by the Up Helly Aa committee in the late 70s who sought to build a water-going replica Viking longship.

As word spread about this concept, the newly formed Longship committee was approached by a local boat builder called Alan Moncrieff, who asked the committee if he could build the longship. Up until then the largest boat he had built was a sixereen, so called as it has six oars. These boats were originally used in the past for commercial fishing, long before the advent of today’s modern fishing vessels; nowadays they are used primarily for rowing races around Shetland.

Alan came up with the design based on the Gokstad Viking Ships and he built it in his workshop in Burgess Street in Lerwick. She is 40ft in length, the size of his shed, the head and tail were only put on after she came out of his shed, as there wasn’t room in Alan’s shed for them to be fitted before she was launched!

Q. What does ‘Dim Riv’ mean?
A. The Committee ran a naming competition with local schools throughout Shetland and the name Dim Riv was chosen, submitted by a Janice Jamieson, an eleven-year-old girl from Unst. It means the dawning of a new day… the rip of light when the sun rises over the horizon.

Q. Who made/carved the head of the Dim Riv?
A. The head was also made by Alan Moncrieff, A man of many talents.

Q. Have you had any special guests on board the Dim Riv?
A. Cliff Michelmore, a television presenter who was up in Shetland doing a travel program, Griff Rhys Jones whilst filming a program for Channel 4; and the writer Chris Browne, famous for the character Hägar the Horrible, has been onboard while visiting Shetland on a cruise. The Dim Riv has also featured in adverts for Harp Lager and Murphy’s Irish Stout. She was taken to the Guinness estate in Southern Ireland for filming the Harp Lager advert and was taken to the River Thames for the Murphy’s advert.

Q. The Dim Riv offers short trips in harbour waters in the Summer. Can you tell us a little more about the trips and give people an idea of what they can expect?
A. The Dim Riv usually offers short trips around Lerwick Harbour throughout the summer, but with the current pandemic we have been unable to do any trips yet, as due to the social distancing regulations it is virtually impossible to help with putting on lifejackets and to assist people with coming onboard. We hope to offer group trips in the near future. As for what to expect, we are the only chance that people have to take a tour of Lerwick Harbour aboard a replica Viking Longship. If weather conditions are suitable, we hoist the sail and enjoy the scenery in peace and quiet, with only the noise of the water lapping the vessel as we sail through Bressay Sound.

Q. What would you like a visitor to take away from the experience of sailing on board the Dim Riv?
A. Visitors will experience Lerwick’s waterfront close hand and they might even get to see the local wildlife close up. Visitors will also gain a better understanding of how the Vikings ruled the waves and take away memories that will last a lifetime.

Q. How does a visitor go about booking a trip on the Dim Riv?
A. We are hoping to offer group trips in the future. We have a Facebook page ‘Dim Riv Harbour tours’, where we take bookings.

Q. What is the longest journey made by the Dim Riv?
A. The longest trip the Dim Riv has done would be in 2005 when we sailed from Bergen to Kalvag, a small town on an island called Froya, which is south of Maloy. We set off from Bergen at seven o’clock in the morning and did not stop until ten o’clock in the evening. We took the Dim Riv across to Norway on a ferry called Norrona and made our way up to Maloy, Lerwick’s twin town in Norway, for the Maloy Dagene, an annual festival held in the town.

Before that we sailed the vessel around the mainland of Shetland, which was done in four legs; the first was from Lerwick to Brae, then from Brae to Aith, then Aith to Scalloway, and then from Scalloway to Lerwick. This was done over three weekends and the trips were enjoyed by all who took part.

Q. How do you ensure the Dim Riv looks spectacular year after year?
A. The Dim Riv is looked after by a group of volunteers who are immensely proud of her, and it is this group that make sure that she always looks her best. She is stored in her own boat shed in the town during the winter months and any repairs/renewals are carried out during this time. It must also be noted that thanks to the help and dedication of these individuals and Mr Alan Moncrieff’s expertise and skill in the first place, she is looking as good today as the day she was launched in 1980.

The Committee would also like to thank the Lerwick Port Authority and LHD Ltd for their continued support and assistance throughout the years.

For more information about the Dim Riv, please visit www.facebook.com/dimrivharbourtours 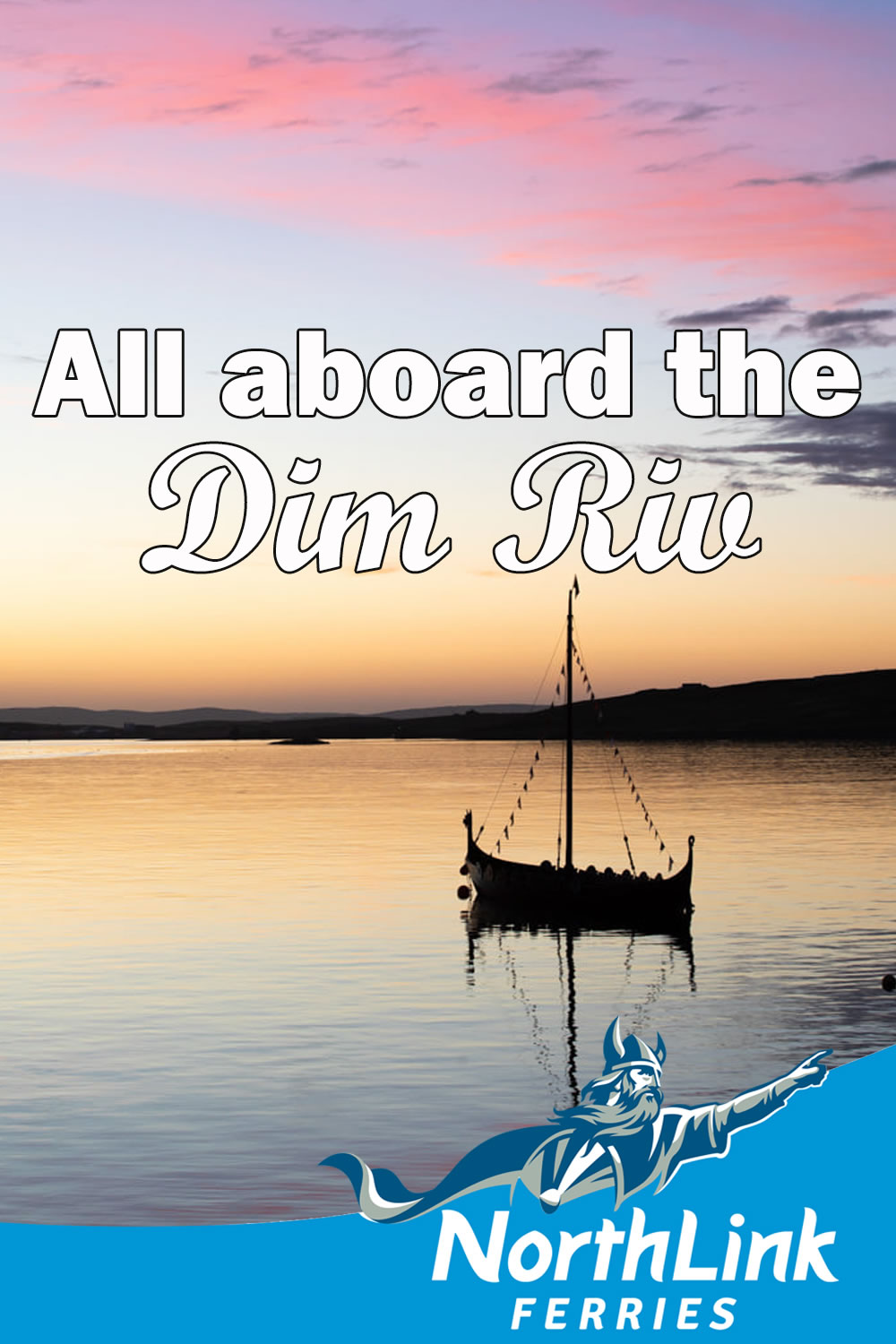