A walk to Culswick Broch in Shetland

The first time I visited Culswick Broch was the day after Up Helly Aa. Despite reaching my bed at six o’clock in the morning, my internal alarm clock meant that I woke up ready for the day ahead after just three hours sleep. Tired, but still keen to make the most of my time in Shetland, I was looking for somewhere to explore before catching the ferry that evening.

Looking beyond Culswick broch to the spectacular seascape it was clear where the stone to build the broch had come from. There are exposed cliffs to the west and the south – made of the same pink granite. I wondered if the cliffs were as close when Culswick broch was built.

Culswick Broch on the westside of Shetland seemed like an intriguing place to go, and perhaps a good walk would blow the cobwebs away.

The drive (about 28 miles) took a while; just long enough to dry my hat and gloves which had been dripping wet (from watching the galley burning the previous evening) on the air vents. I typed Lerwick to Culswick into Google Maps on my iPad and followed the blue line, driving north from Lerwick, turning west to Walls and Sandness and then onto Skeld and finally the quiet rural road to Culswick. I arrived at an old building with amazing stonework and a signpost to Culswick Methodist Chapel attached to the gable end.

A gate stood before a hill track and a tall wooden sign pointed to Culswick Broch, a distance of 1½km away. I parked the car out of the way of other traffic and set off up a hillside dotted with sheep and gently whirring wind turbines.

I reached the crest of the hill and made my way through another gate, past the Methodist Chapel. I was struck by the landscape of stone and heather before me. It was the 1st February, so the ground was quite wet. I passed by exposed rocky hillsides and huge boulders. Before me were fields markers and sheep pens; walls that enclosed nothing anymore in their collapsed state.

The path was quite rough and rocky – it was a farm track which had been bulldozed through the peat bog. There were tyre tracks as if a vehicle had driven here, but I couldn’t imagine anything but the most sturdy 4×4 manoeuvring along it. The path took me right down to a loch’s edge. I had to do a double-take as one large loch-side stone resembled a seal. I scolded myself – at this point I was quite high above sea level and it would take a very determined seal to come anywhere close to here!

There were impressive cliffs and ruined croft houses to the south. It really was the case that around every turn there was another amazing sight. Suddenly the view to the west opened up and Culswick Broch could be seen, standing on a hillside above a loch. As I made my approach the track went over a small hillock, whilst a narrower footpath branched off to the left which would take you closer to the loch. I took the track over the hillock for the view of the dramatic broch and ramparts.

There’s a causeway to cross the loch in front of Culswick Broch, and it was much more substantial than I had first imagined. When reading about crossing a causeway I had pictured a nervous jump across some stepping stones. It was a solid path though and my feet stayed dry. As I crossed, the water from the loch lapped at the causeway making a pleasant sound.

Once at the other side and through a gate, it was a short, but steep climb up a hill to Culswick Broch. By the time I reached my destination I was quite out of puff!

The broch itself was really impressive. Brochs are defensive round Iron Age structures with thick drystone walls. They resemble pottery vases and usually had a thin internal staircase in the hollow outer wall that led up to more floors and a large central space.

One of the best preserved brochs in Shetland is on Mousa and it was built in 100 BC. Culswick is unexcavated so the date of its construction is unknown, but it was probably built around the same time. It is made of chunky pink granite and covered with lichen. There’s a triangular lintel above the door which is quite nice, but you can’t enter the doorway as the broch is collapsed. There was a clear step in the wall so I climbed on top of the broch to look down inside.

Much of the stone from this once tall broch had fallen inwards. The original ground floor was 2m lower and it is possible still to see some internal chamber structures. I read afterwards about a drawing by George Low from 1774 which shows Culswick Broch in much better condition with three balconies. Down the hillside near the shore of the loch there’s a ruined croft – was it built using the stone from the broch during a time when we were less respectful of our history? More recently some vandalism had occurred at Culswick. Not for the first time, my curiosity wished for a time machine so that I could see Culswick Broch in its former glory.

Looking beyond the broch to the spectacular scenery it was clear where the stone to build the broch had come from. There are exposed cliffs to the west and the south – made of the same pink granite. I wondered if the cliffs were as close when Culswick broch was built.

I took a wander around Culswick Broch – it’s about 16m in diameter – and found the remains of a circular defensive outer wall amidst a scattering of fallen stones. At points the wall was as tall as 3½m high. However, if Mousa broch was anything to go by, originally Culswick may have been nearly 13m high.

During my time there I met two walkers and a dog walker. The dog walker continued on towards the ruins of the deserted township of Sotersta. The walk to Culswick Broch seemed to be quite a popular jaunt despite it being in quite a remote location.

As I sat in the wind, I was tired but happy that I had made the walk to Culswick Broch; which took about 1 hour. The coastal view around me was quite amazing and the broch was very impressive.

In its time, Culswick Broch must have been a very imposing structure, dominating the landscape. With the cliffs so nearby I imagined it must get battered by winter winds, and despite the damage that occurred in more recent times, it’s amazing that Culswick Broch is still standing to the extent that it is. I’d heartily recommend a visit to Culswick Broch to all keen Shetland adventurers! 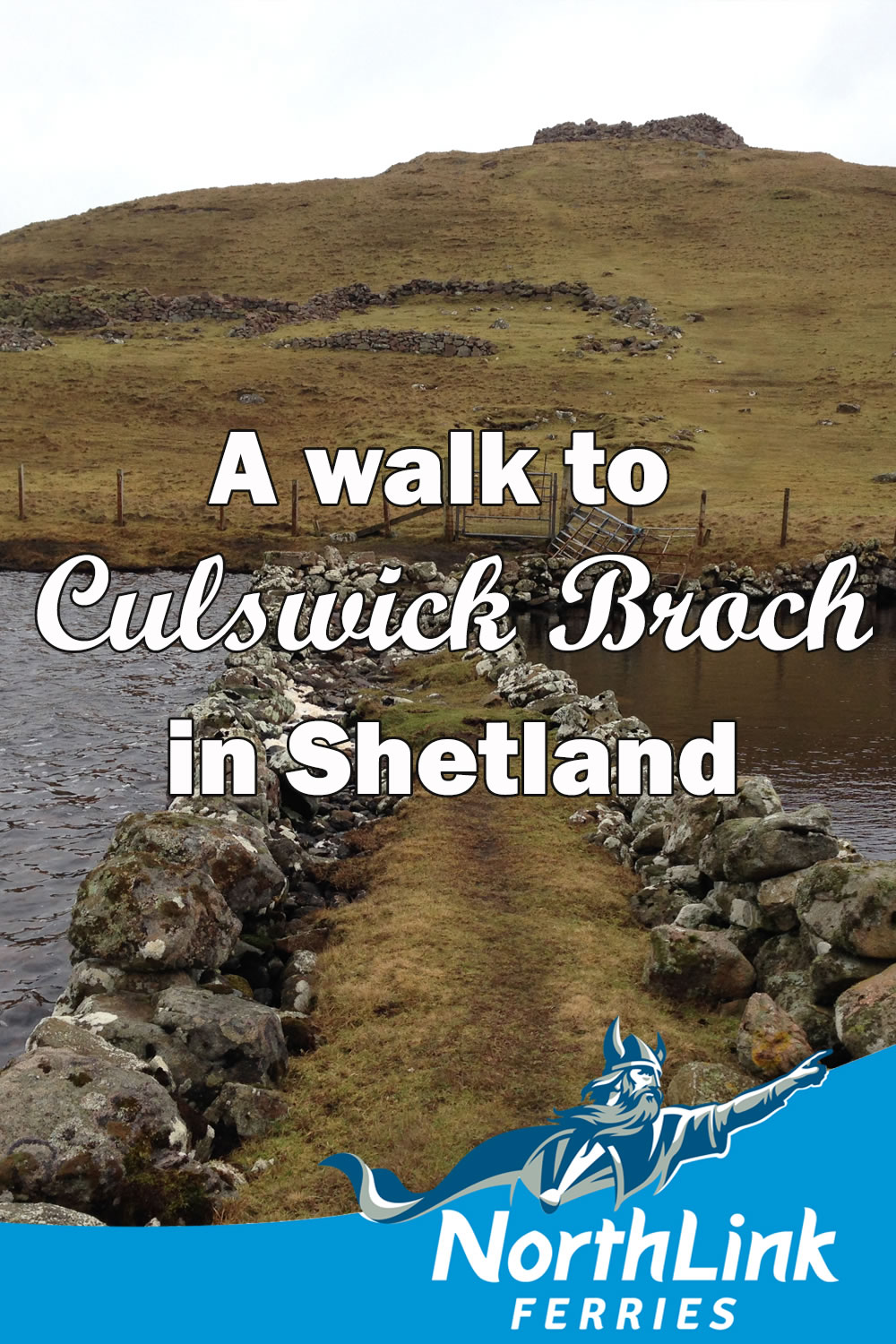