Muckle Roe is one of the easier islands to visit because it is joined to the Shetland mainland by a bridge! The island is located close to Brae in the north mainland, and the bridge, which was built in 1905 and replaced by a more modern version in 1999, is at Busta.

The wilder parts of Muckle Roe are a paradise for hill walkers and cyclists. Those who love the outdoors regard it as an adventure playground, free to access as long as you close gates and are careful of the sheep and ground-nesting birds. For many, the highlight of the island is the Hams of Muckle Roe on the north-west coast.

This circular island is 3 miles in diameter and is known for its beautiful coastal scenery. We hope you enjoy reading these fascinating facts about Muckle Roe.

The island is made of red rock

The name Muckle Roe comes from the Old Norse ‘raudoy mikla’, meaning ‘big red isle’. This is because the island is made of red rock from a 350 million-year-old extinct volcano. The island is a must-visit for geologists.

This red granite is known as granophyre, and its red hue comes from high levels of potassium feldspar. This rock is responsible for the island’s striking coastal features because it resists erosion.

This affects the wildlife here because the granite does not create suitable ledges for puffins or guillemots. However, Muckle Roe has cormorants, fulmars, arctic terns, seals, otters, and sheep to see.

Most of Muckle Roe is wild!

As Muckle Roe is easy to commute to, it does not suffer the depopulation common on other islands.

130 people live here, in crofts to the east and south-east where it is more fertile. Much of the rest of the island is lochan-studded moorland. As a result, the road only covers a small portion of the island. If Muckle Roe were a clock face, the road would reach from 2 o’clock to 6 o’clock.

The wilder parts of Muckle Roe are a paradise for hill walkers and cyclists. Those who love the outdoors regard it as an adventure playground, free to access as long as you close gates and are careful of the sheep and ground-nesting birds.

The Hams of Muckle Roe

For many, the highlight of the island is the Hams of Muckle Roe on the north-west coast.

The Hams are a series of small bays, each hemmed in by low jagged red granite cliffs on either side. Hams means ‘Havens’ or ‘Harbours’ and the shingly red beaches here are perfect for swimmers.

There are caves here, a massive chasm called the ‘Big Geo of Stromness’, and impressive sea-stacks. These include ‘Erne stack’, were sea eagles once nested, ‘Swabi stack’ which is barely separated from the land, the twisting rock of ‘the Spindle’, and a two-legged stack called ‘Da Kist’.

Visiting the Hams of Muckle Roe on a summer evening is particularly recommended, as the setting sun turns the rock to the colour of fire. Seals are often hauled up on the quiet beaches of North Ham and South Ham.

However, South Ham has a lawless past! In the 19th Century, fishermen working in the Faeroes would return with contraband; brandy and tobacco to be sold in Shetland. South Ham was a popular landing site for these smuggled goods.

How to reach the Hams

There are no roads to the Hams of Muckle Roe. Instead, there is a rough track which leads all the way from the road in the south (starting at Cumle), winding over the hills to this unspoiled beauty on the north coast.

This track is approximately 3 miles long with steep climbs in places. It can be walked, but some folk enjoy taking mountain bikes on it too. The journey is worth undertaking to visit what is often described as the prettiest place in Shetland.

You can also reach the Hams from the track at the cemetery, or hike round the entire spectacular coastline if you are feeling extra energetic.

The walk to the lighthouse in the south the island is also recommended. Muckle Ayre, a secluded red beach, and the Burki Skerries are hidden gems.

Continue along the coast and you’ll find the blowhole of the Hole of Hellier. Be careful as this is a surprising and steep drop to the sea.

A short distance on are the Murbie Stacks, which are enormous chunks of rock in the sea, and a small lighthouse, which, in 2001, replaced an older one.

The old Muckle Roe light can now be found at the Sumburgh Head car park, where it is used as an information point.

From the south there is a superb seaward view across an area of water known as Swarbacks Minn, and to the uninhabited islands of Linga, Papa Little, and Vementry.

The deep sheltered water of Swarbacks Minn was often used as an anchorage for large ships. In the First World War, the Royal Navy 10th Cruiser Squadron operated from here, and they stopped ships from delivering supplies to Germany.

On Vementry there are two six-inch navel guns and a magazine. These once guarded the entrance to Swarbacks Minn and protected the base.

The coast of Muckle Roe and Vementry are worth exploring by kayak.

Other places to visit

Muckle Roe’s tallest hill, Mid Ward (172m), is in the centre of the island. On a clear day you can see as far north as Saxa Vord on Unst and as far south as Fitful Head.

On nearby South Ward there are the remains of a World War One lookout post.

At Mill Loch there is a derelict Norse watermill. Norse mills are different to most mills used for grinding grain. Usually mills have a vertical water wheel, like a hamster wheel, but a Norse Mill’s wheel is horizontal like a carousel. The grinding stones can still be seen on the floor, and water still flows through the small roofless mill.

Nearby there is an abandoned settlement. The crofters that stood in the doorways of these ruined houses are long gone.

The island has a connection with a well-known brand of butter! Gilbert Williamson Wood was born on the island and emigrated to Australia in 1853. The company he set up with his son there produced Anchor butter.

We hope you enjoy walking the gravel paths, going through the gates and climbing the styles of Muckle Roe. There are marvellous views from every corner, and don’t forget to take a picnic! 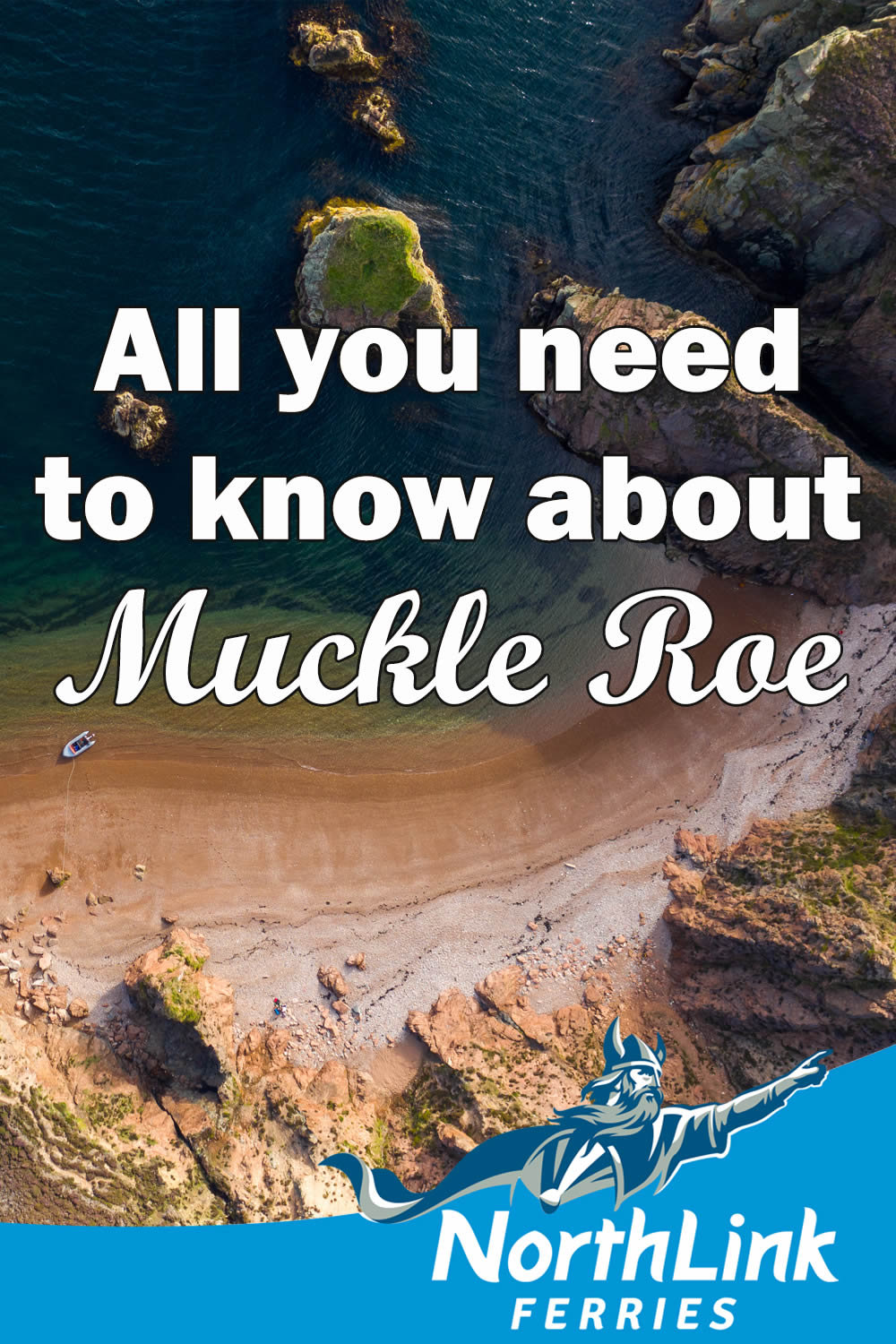