Shetland has many isolated standing stones dotted around the landscape. Whilst there are no standing stone circles like those found in the Orkney islands, these individual monoliths are certainly impressive and mysterious.

There is a story about the Clivocast Stone and two witches, one of whom lived in the island of Unst and another on nearby Fetlar. They shared a pair of tongs for their individual fires and threw these between islands. The standing stone is the lodged remains of those tongs.

Perhaps standing stones in Shetland were ancient markers of important places. Or perhaps stones were used as markers for fishing vessels to find their way home? The effort required to erect these stones (some are 5,000 years old) means that they were possibly a status symbol or had some other important meaning. Nearly all the Shetland standing stones now are associated with entertaining folk tales!

On the south west side of the island of Unst is Shetland’s largest stone at Bordastubble. Flat on one side and rounded on the other, the 3.5m high stone stands with a tilt. We thought it looked like the flipper of a whale raised out of the sea. The Bordastubble Stone is probably glacial in origin, but it packed with stones at its base, is clearly visible from the sea, and possibly aligned to the movements of the moon.

Locally, the stone has been affectionately called ‘Mam’ because it can shelter young sheep from the wind.

In the north of Shetland, on the road from Brae to Mavis Grind, there’s a 3m high standing stone, easy to spot in the middle of a hillside field. This megalith watches over the village and harbour at Busta Voe. The Busta Voe standing stone is large (estimated to weigh 20 tonnes), granite and covered in lichen. There is a smaller stone nearby which has toppled over. Was it a memorial for a battle or fallen chief?

Folklore tells the story of a disagreement between giants. The stone was thrown by the giant of Papa Stour at the giant of Mavis Grind!

Just beside the road to Muness Castle on Unst is a tall leaning standing stone, like a figure bracing itself against the wind. The Clivocast Stone, also known as the Uyea Breck Standing Stone is 3m tall, made of soft grey slate and has an almost wooden appearance. It stands on a commanding position above Uyeasound and is said to mark the spot where the son of the viking Harald Harfager was killed in 900 AD. A second, much smaller, stone lies couple of fields away.

There is a folklore story about the Clivocast Stone and two witches, one of whom lived in the island of Unst and another on nearby Fetlar. They shared a pair of tongs for their individual fires and threw these between islands. The standing stone is the lodged remains of those tongs.

Standing high on the Hill of Cruester and overlooking Lerwick from the island of Bressay, the Cruester Standing Stone is probably the easiest standing stone for a visitor to see (from afar) on this list. It is a thin and tall slab of sandstone that is surrounded by lochs, burnt mounds and a prehistoric house.

The position of the Cruester Standing Stone means that it would have been visible from the sea and from much of the east coast of Shetland’s mainland.

Perhaps the most mysterious stones on this list, the Giant’s Stones of Hamnavoe are two standing stones in a line, 20m apart, almost pointing towards a site. These stand on a heathery slope, overlooking a small harbour, but are not visible enough to have been used a sea marks. A third stone was once here, and it is possible these once formed a circle. The name comes from the tale that the stones (one 1.8m tall and the other 2.4m tall) marked the head and foot of a giant’s grave!

Hamnavoe is a little settlement north of Braewick, and there is a broch nearby and Johnny Notions Camping Böd, which was the home of John Williamson (1740-1804) who created a serum to cure smallpox.

The most dramatically named stone on this list, the Murder Stone, also known as Tingwall stone, is found beside the road in a fertile valley north of Scalloway. It is 1 mile from a lochside Norse assembly site, where Shetland’s earliest parliament was held, and the two places are connected. In 1389 an argument broke out at the parliament over who would control Shetland.

The Murder Stone is a 2m tall standing stone of grey granite which marks the spot where the argument escalated and Malise Sperra was slain with seven of his supporters. The alternative story, that there was a tradition that murderers would be pardoned if they could outrun the families of their victims and reach the stone, is most likely false.

The Stone of the Ripples, Fetlar

In the centre of the island of Fetlar at Houbie there is the Fetlar Interpretive Centre and Leagarth House, a grand house built in 1901 by Sir William Watson Cheyne who was a pioneer in safe antiseptic surgery methods.

In the garden of Leagarth House there is a standing stone of unknown age named the Stone of the Ripples. It is 2.3m tall and is named for the stretch of coast on which it stands; ‘Da Ripples’. Visible from the sea, could this stone, which tapers to a pointed top, have been a marker or a memorial?

On the hill above the Skellister junction there is a dramatic 3m high standing stone known locally as the Auld Wife o’ Skellister . There is a short but fairly steep walk up from the road to the stone which is made of local grey sandstone with large veins of white quartz. It has an unusual stooped shape and it’s easy to see why it has been given its name.

The Auld Wife o’ Skellister overlooks South Nesting from the north and has lovely sea views – was it possibly used as a marker for fishermen?

Located just after Collafirth in Northmavine, The Beorgs of Housetter is a boulder-covered hill, known as the Giant’s Garden, just a short walk from the roadside. At the foot of the hill are a pair of red granite standing stones known as da Giant’s Grave. They stand at 2m and 2.7m and are the remains of an almost totally ruined Neolithic chambered cairn.

The story goes that a giant planned to use the rocks to build a causeway to Yell to rustle cattle, but the Islanders catapulted him to his death from the top of the Beorgs. Similar to the story behind the stones at Hamnavoe, da Giant’s Grave marks the foot and head of his grave. Given that the stones are 5.5m apart, the Giant must have been rather tall indeed! 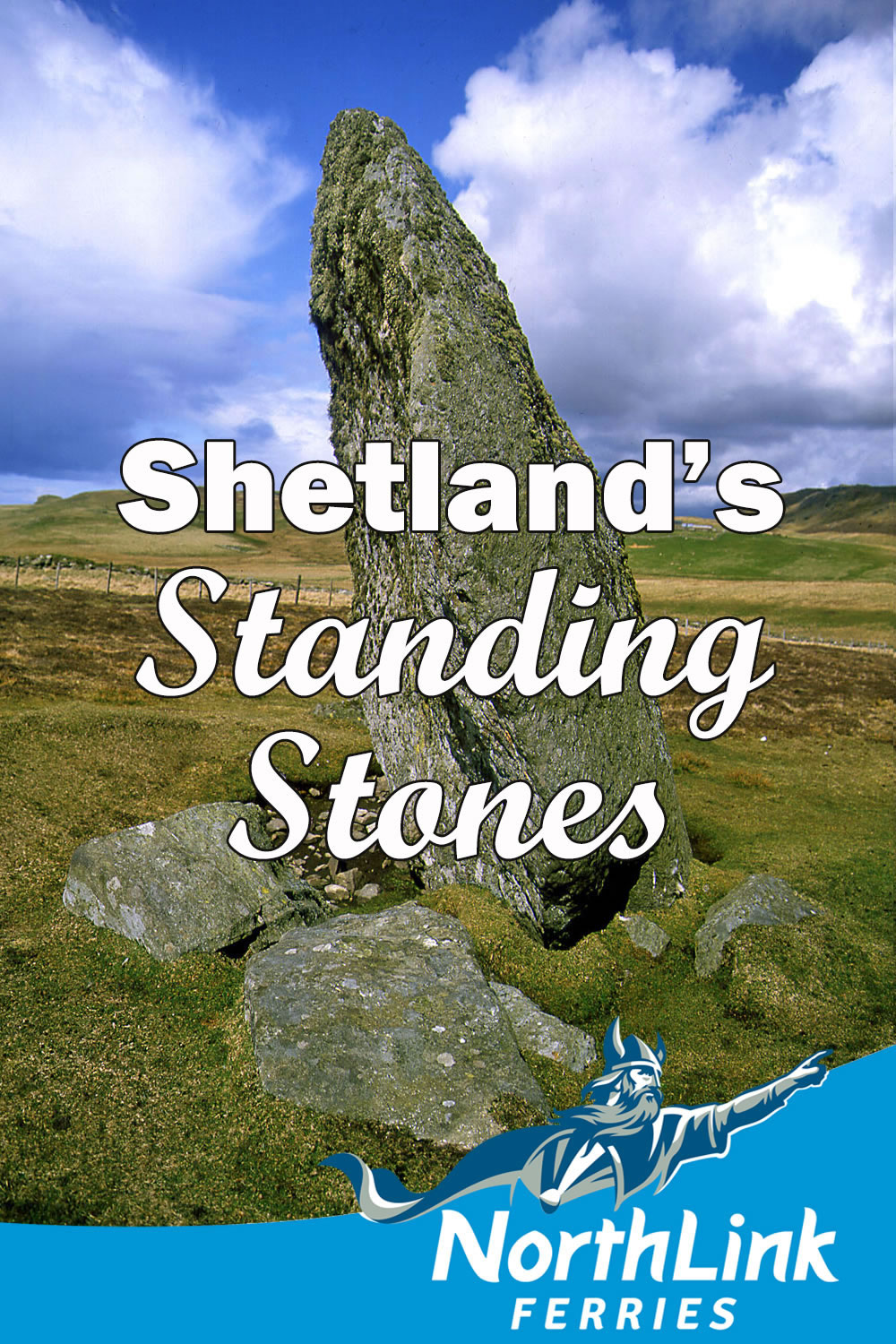