Laurie Goodlad, a tour guide with a business called Shetland with Laurie has written about the midnight trip to Mousa. During the trip you can see the Storm Petrels return to their nests within the walls of the Iron Age building, Mousa Broch, and Laurie has kindly shared her experience with NorthLink Ferries. If you love amazing adventures and bucket-list experiences, read on!

I was once told that to experience the sound of the Storm Petrels within the Broch walls at Mousa was like listening to a fairy being sick!

I was once told that to experience the sound of the Storm Petrels within the Broch walls at Mousa was like listening to a Fairy being sick. Conjuring up images from Lady Cottingham’s book of childhood, curiosity found me standing on the pier at Sandsayre on Wednesday night, waiting for the Mousa Boat to take us on the midnight trip to see these curious little birds.

Armed with a pair of binoculars and dragging my good friend Helen along, we were in good spirits as we boarded the Solan IV for the short crossing to the now uninhabited island.

Going into Mousa at night is a completely different experience to going in on a day trip. Landing in the summer dusk at 11pm was slightly eery and the island had a more mysterious feel.

On the short walk to the Broch we saw the latest addition to the island, a wooden bench which sits on the 60 North latitude line. Rodney, from the Mousa Boat built it using driftwood which washed ashore on the island during last winter’s gales. Driftwood has always been important to Shetlanders, as we live in an almost treeless landscape, and I believe it’s ingrained into every one of us to squirrel away every last piece!

A walk along the shoreline proves this as there are numerous piles of wood of varying sizes and quality ‘laid up above the tideline’ to be collected at a later date for some project or another and despite best intentions this ‘later date’ often never comes! That said, it’s still an unwritten rule here in Shetland that wood laid up above the tideline must be left for the gatherer to collect, even if it has been there so long that it has started growing a fine coat of moss, or that it has been there for all of living memory and has begun the long process of rotting back into the ground, the wood is sacred and should be left well alone! However, rules of the shoreline over, back to the bench!

Mousa lies on the 60 North line, meaning that it is on the same latitude as St Petersburg, Helsinki, Oslo, parts of Alaska and Labrador Bay, and given the choice of any of those ‘exotic’ destinations, there is nowhere else in the world I would rather have been on that particular Wednesday evening. Approaching the 2,000 year old Broch was very atmospheric, it was shrouded in mist, giving it a real air of mystery and intrigue.

Fascinating as the Broch is, the real reason for our visit was to see the Storm Petrels (pictured above at the Fair Isle Bird Observatory) returning to their breeding colony within the Broch walls. Storm Petrels are small seabirds who only land on shore during the breeding season in order to lay an egg.

Mousa is home to 11,000 breeding pairs, with 300 to 400 breeding pairs making their home within the walls of the Broch. Prone to predators they return to the breeding grounds at dusk to avoid capture from the Great Skua (Bonxie) and Black Backed Gulls.

Mousa is the perfect place for these vulnerable little birds as there are no ground predators on the island. Yes, Mousa has no rabbits, hedgehogs, rats or even mice! So, as midnight approached the birds began to flock back to land, their flight was quite erratic as they circled the Broch seeking out their own nest site and I even witnessed a mid-air collision!

Once settled into their nests we got the opportunity to listen to them so that I could try to offer a good description of their call. The first thing that struck me was that, despite their size, they are very noisy!

I thought long and hard about how best to describe the sound and after much thought and deliberation, I can honestly report to you that they do in fact sound like Fairies being sick!

So, for anyone who is still in doubt, I suggest a midnight trip to Mousa, and for those who just wish to experience the best that Shetland has to offer, then I would highly recommend a trip to see the Stormy Petrels! 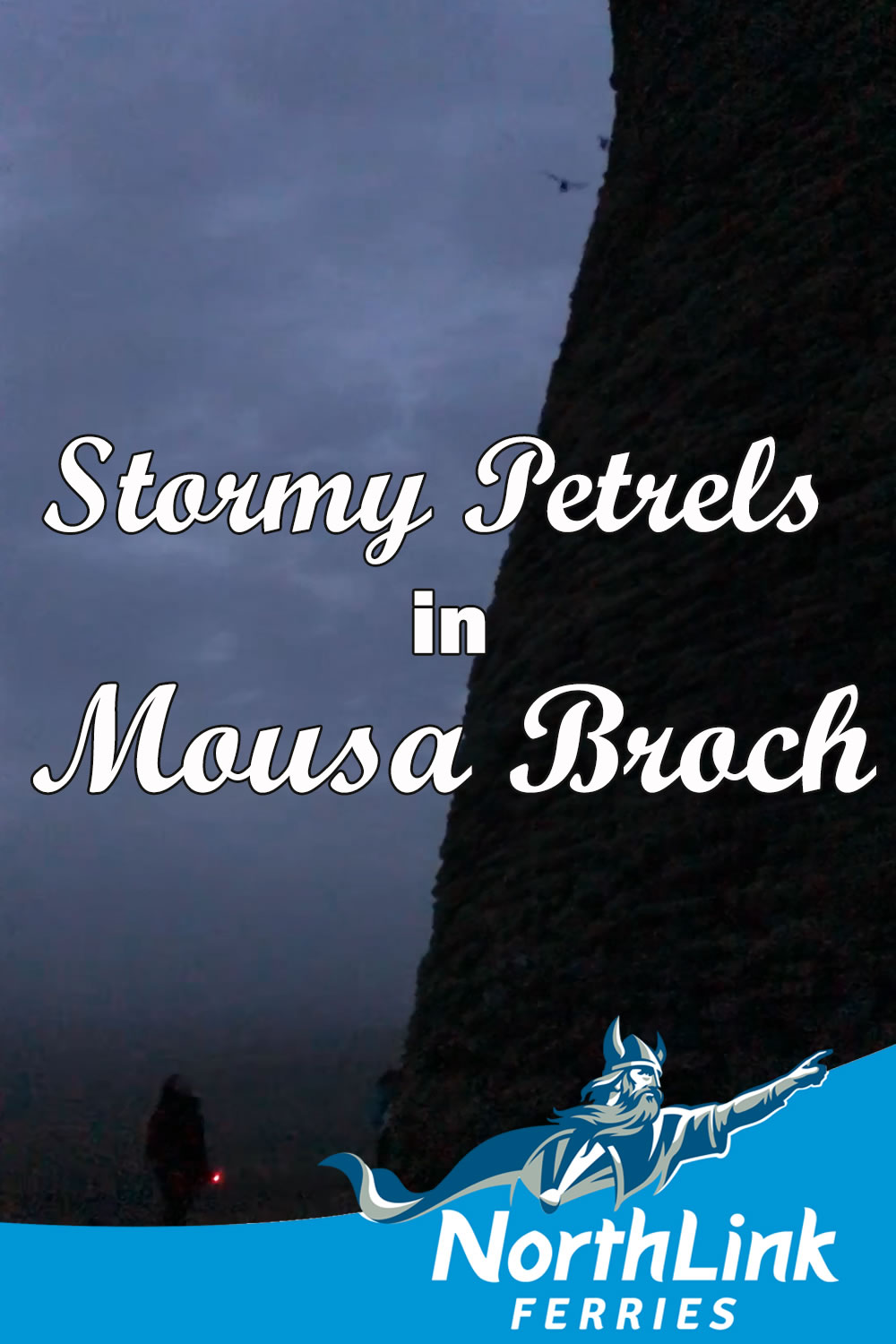