As you travel round Shetland you’ll often see Shetland Ponies grazing on rough moorland, as if they are ownerless. This is far from the case though; in the past and often in the present, Shetland Ponies are marked by their owners and then left to run wild on the common. It is this practice that has led the breed to be so hardy and unique.

Ponies are thought to have arrived in Shetland by crossing ice fields at the end of the last ice age, around the same time that woolly mammoths still roamed.

Read on to find out ten fascinating facts about Shetland Ponies!

1. They are unique creatures

Shetland Ponies have been lived in Shetland for over 4,000 years and it is that unique island environment that have made them as robust as they are. They are the smallest of the pony breeds found in Britain (no taller than 42 inches) but they are also amongst the hardiest.

Shetland Ponies are able to withstand the worst of Shetland’s winter storms, and move well to find food and shelter in boggy heath and rock strewn hills. Those that couldn’t simply didn’t survive.

Natural selection has created a sturdy animal with a coat that, in winter, has hairs which shed the rain, keeping the pony’s skin dry and, in the summer, a coat that carries a beautiful silky sheen. Shetland Ponies have mane and tail hair that is long and straight and can be found in any colour except spotted.

2. Shetland Ponies have been around since the end of the last ice age

Ponies are thought to have arrived in Shetland by crossing ice fields at the end of the last ice age, around the same time that woolly mammoths still roamed. In isolation they evolved to be the Shetland Pony we know today.

Pony bones were found at Jarlshof where they were present (though larger) during the Bronze Age. Evidence suggests that they were used for work rather than hunted for food. Cattle and sheep bones found at prehistoric sites were split to suck out the marrow but pony bones have never been found like this.

Other examples of ponies in Shetland’s history include the image of a pony on the Papil stone and on the Bressay stone; Pictish artwork from the 9th century. The later Norse inhabitants had a very descriptive way of naming areas of Shetland, and some places on the map clearly had an abundance of ponies (or hestr as horses were called in Old Norse). These include Hestakam (horse hill), Hestaford (horses bay) and Hestigio (horses cliff).

3. They have been invaluable to Shetland Crofters

There weren’t really roads in Shetland until the 19th century (most transportation was done by boat) and ponies were handy for traversing the land; they were very good at negotiating the island’s rough and boggy tracks.

Crofters didn’t have enough to feed them, so Shetland Ponies were marked to establish ownership and then set loose to run wild on the common or ‘scattald’. The ponies would be caught again when they were needed to carry out tasks.

4. There are some interesting laws surrounding Shetland Ponies

The marking of Shetland Ponies was very much required. In the early 17th century, Earl Patrick Stewart, the deeply unpopular ruler of Orkney and Shetland would claim any ponies that were found to be ‘ownerless’.

Other laws were in place around Shetland Ponies in the 17th century. Pony tail hair was sought after as it was ideal for making fishing lines and bird snares. A rough Shetland fiddle, called a gue or gu was played using a bow made of horse hair. However pony hair had to be removed carefully as removing it left ponies dangerously exposed – so cutting tails was a crime.

Another crime that appeared regularly appeared in court documents was that of riding another man’s pony without his permission!

5. Riding Shetland Ponies was a popular pastime for fishermen

From 1600 to 1892 the Dutch fished the shoals of herring around Shetland each year between 24th June and 14th September. The Dutch fleet would shelter off Lerwick and the town prospered and grew to accommodate their needs.

The doctors who travelled with the Dutch fleet would recommend that the fishermen on board take regular exercise. A popular way to follow doctor’s orders was to hire a Shetland pony from crofters for riding! This led to amusing scenes around the town, however, there is the tragic story of a cliff at the Knab named Dutchman’s Leap. An unlucky fisherman rode his pony over the edge here and both died.

At the end of the herring season, Dutch fishermen would take a pony or two back home with them, and these were the first cases of exporting Shetland ponies.

6. Shetland Ponies became sought after and were exported world-wide

By the end of the 18th century, ponies had reached England, taken there by whaling ships returning from Greenland. There was a fine profit to be made by stopping in Shetland on the way home and taking some four legged passengers on board!

In 1885 a Shetland Pony was exported to the USA and the breed was very popular there. When the first Shetland Pony was unloaded from the train the owner was offered £100 for her – a jaw-dropping price at the time. However this price is small when you consider the value of Shetland Stallion ‘Sensation’ who was traded for 640 acres of land in Texas. That land was later developed into a highly profitable gas and oil field!

7. Shetland Ponies were used in mines

The biggest exportation of Shetland Ponies occurred after the 1842 Mines Act prohibited woman and children from working in the pits. Although ponies had already been down in the mines before the 1842 Mines Act, the demand for them grew sharply, and hundreds of thousands of ponies were used up until the 1960s.

Ponies were very strong but also small – ideal for confined spaces. Their docile nature also meant that they could be trained for the mines quickly. Shetland Ponies were also thought to have a sixth sense to warn them of danger.

There was a demand for males (a mixture of sexes would have caused the ponies to fight) and 500 of the best ponies left the Shetland Islands each year.

8. Problems occurred because of early exporting

Under natural conditions in Shetland, the crofters ponies ran wild on the common or scattald. Natural selection meant that only the strongest Shetland Ponies would survive the winters, and only the strongest stallion would claim the mares. As the demand for them increased, problems began to occur.

Only the strongest and best males aged 4 to 12 years were sought after for the pits. There was also a demand from America for quality mares and stallions, and the prices offered were incredibly tempting for poverty-stricken crofters in Shetland.

Previously there were over 10,000 ponies in Shetland but by the end of the 19th century there were very few and the quality was poor. Steps were taken to ensure that quality ponies were bred to be exported.

9. Efforts had to be made to keep up standards of the breed

Many Shetland Pony breeders began to make efforts to improve the quality of the Shetland Pony stock. However the most celebrated breeder was the 5th Marquis of Londonderry who had mines in County Durham. He established studs (pony breeding farms) on Noss and Bressay with the aim of breeding pit ponies and selected 6 quality stallions who would go on to have a profound influence on the breed.

The Shetland Pony Stud Book Society of the United Kingdom was started in 1890 and this helped to maintain the purity of the breed. In 1957 the Shetland Islands Premium Stallion Scheme was formed and this helped further improve the breeding stock. As part of the scheme, many mainland breeders sent their finest stallions to the islands. By making these high quality stallions available to the mares which belonged to crofters in Shetland, the breed was improved for the better.

10. Shetland is the best place to procure a Shetland Pony

These days Shetland Ponies are bred for export and riding. The best animals are kept on the islands. There are 100,000 ponies worldwide with 50,000 in Holland and 15,000 in Britain. This means that Shetland Ponies outnumber Shetland Islanders by nearly four to one.

In Shetland there are approximately 1,000 ponies with 170 owners. The Shetland Islands are once again the best place to procure a Shetland Pony as the unique conditions of the islands keep the quality high. Natural selection means that if a pony is not fit, it doesn’t survive.

The annual Shetland agricultural shows further improve the pony stock by highlighting the standards to aim for. The Annual Shetland Pony Stud-book Society Breed Show held in July, the Viking Shetland Pony Show and the Cunningsburgh Show, both in August, are all well worth attending. 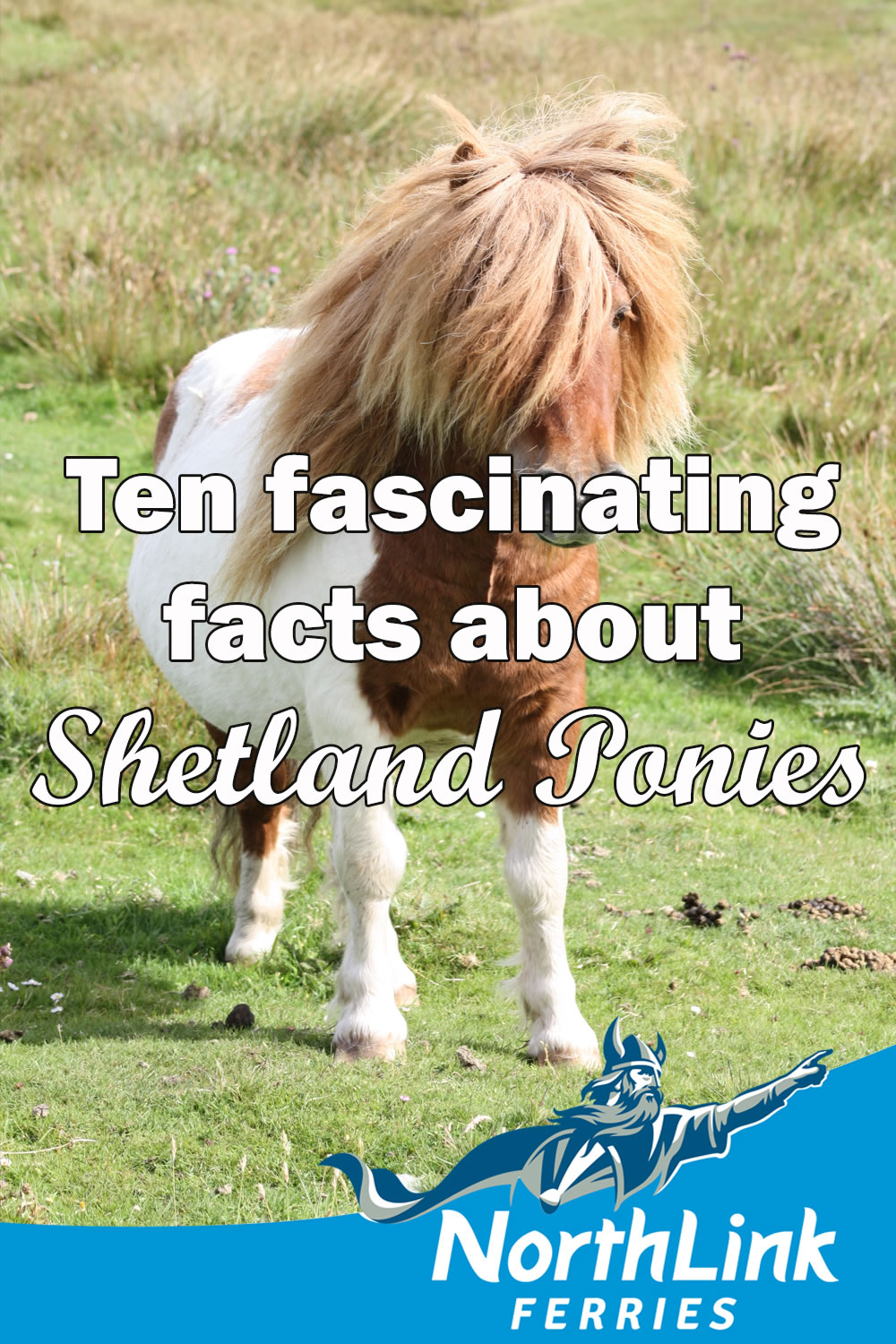