Up Helly Aa is a spectacular fire festival that takes place throughout Lerwick on the last Tuesday of January. The event culminates with flaming torches being thrown into a Viking Galley! As well as the main event there is a smaller Junior version of Up Helly Aa that takes place on the same day.

If you’ve never been before; read our visitor’s guide to the day so that you don’t miss a thing! 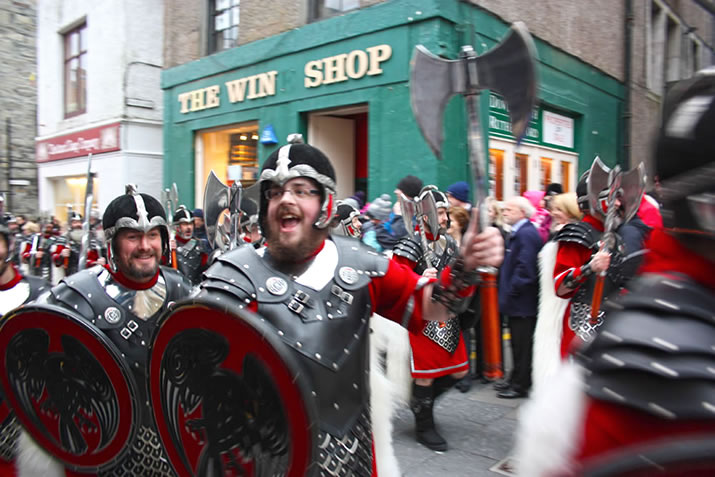 The Jarl’s Squad March in the Morning

0730
You’ll get the first glimpse of the Jarl’s Squad as they go for breakfast in the Islesburgh Community Centre – afterwards they carry on to the Galley Shed, the Toll Clock Shopping Centre and then go into the British Legion. 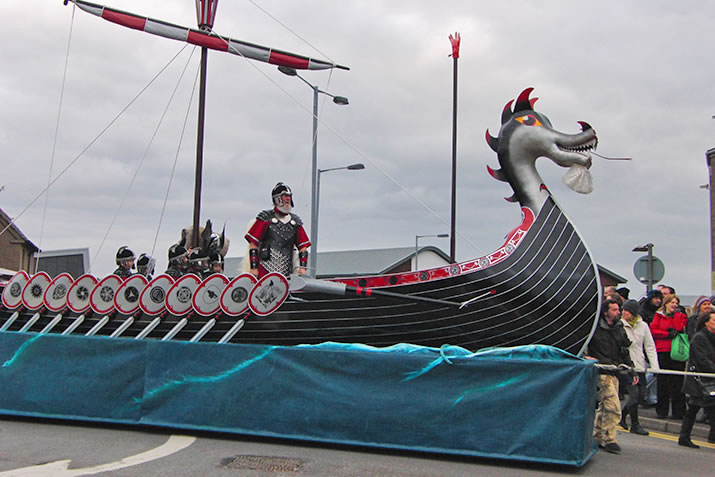 0945
The Jarl’s Squad march with the Galley (which remains with them part of the way) They begin at the British Legion, accompanied by the Lerwick British Legion Pipe Band and Lerwick Brass Band, go along Commecial Road and the Esplanade before turning into Commercial Street. The Jarl’s Squad stops at the Market Cross – where the Proclamation (aka The Bill – instructions with local jokes and satire included) is located. 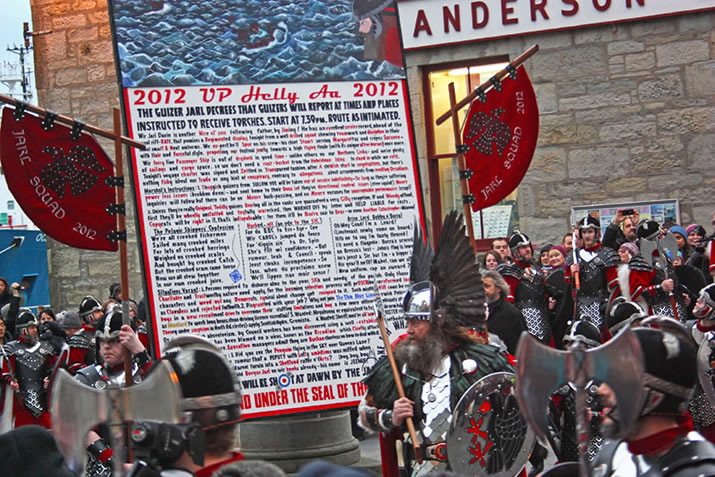 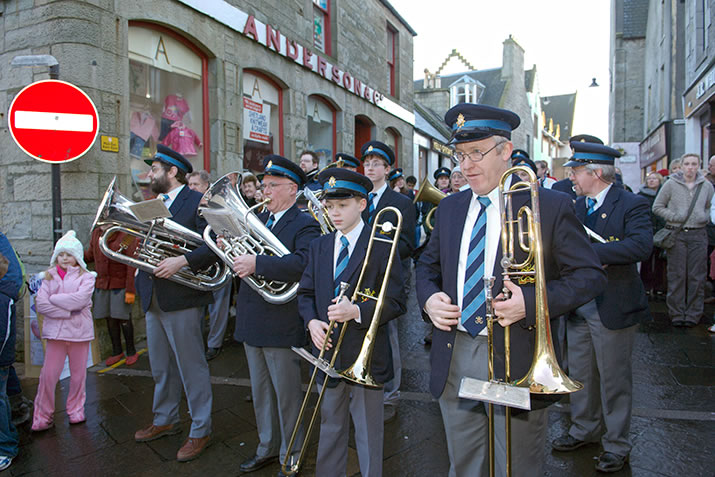 The procession then continues along Commercial Street to Harbour Street and travels back along the Esplanade, where the Jarl’s Squad rejoin the Galley at Alexandra Wharf. 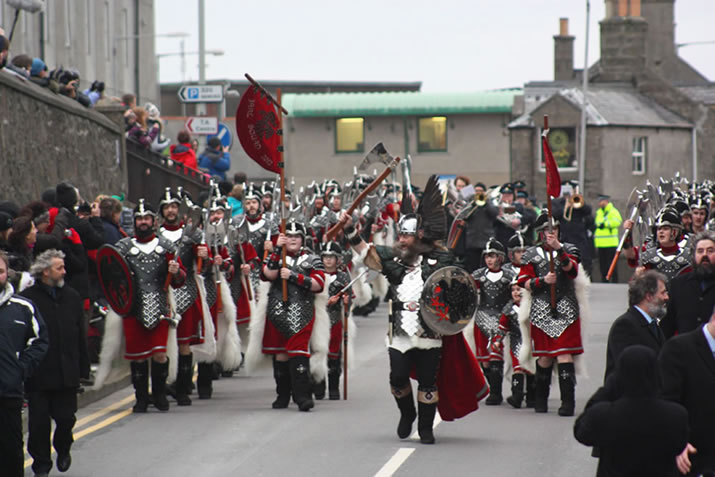 1000
Every year the Jarl’s Squad will pose with the galley for photographs at the Bressay Ferry Terminal, and this is a great opportunity for both amateur and professional photographers to take shots of the amazing outfits made for this year’s squad!

If you wish to take a photo of the Galley standing alone; it will remain at the Bressay Ferry Terminal until 1800. 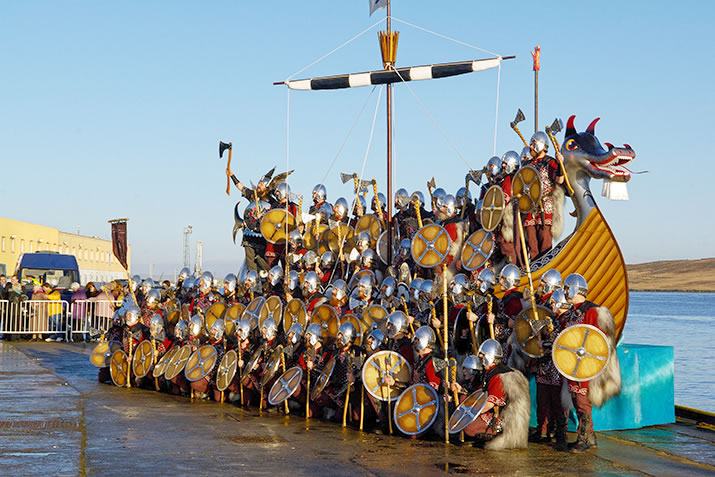 1030
The Jarl’s Squad leave the Galley and are piped along the Esplanade, up Harbour Street and into the Town Hall; where toasts are drunk! The goblet the Jarl’s Squad drinks from comes from Måløy, Lerwick’s friendship town in Norway.

1100
There is a similar procession for the Junior Jarl and his Squad and his galley!

The Junior Galley will be on show at the Anderson High School car park from 0930 to 1100. 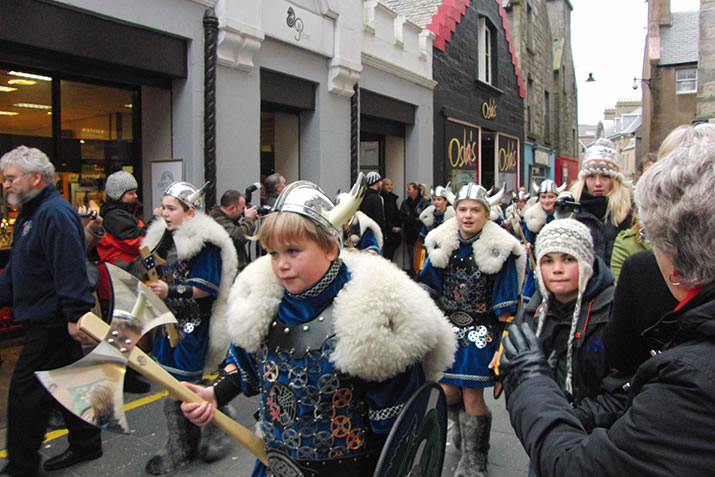 1200
At the Mareel; Fiery Sessions is a fringe Up Helly Aa event – a concert which showcases the best of Shetland’s traditional music! The concert lasts an hour and a half and there’s another concert on at 1500.

1230 (until 1530)
At Shetland Museum this year’s Junior Galley will be on Hay’s Dock for photographs!

1340
At the Mareel; Fiery films – seven short films, both contemporary and from the archive, will take you on a journey of the festival through the ages. 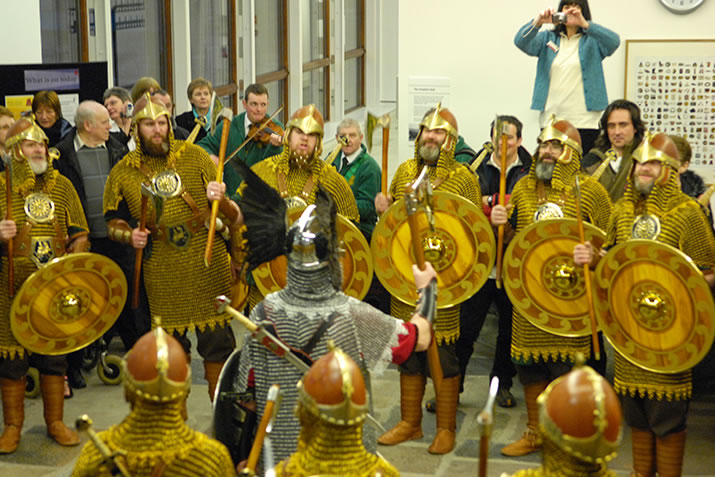 1530 (until 1630)
At Shetland Museum, you can have the chance to meet the Guizar Jarl and his Squad of Vikings.

The Junior Jarl’s Squad set the Junior Galley on fire!

1730
The Junior Torchlit Procession begins at Lower Hillhead. The Junior Guizers march down the Town Hall Brae into King Erik Street and then they proceed into the North Playing Field. 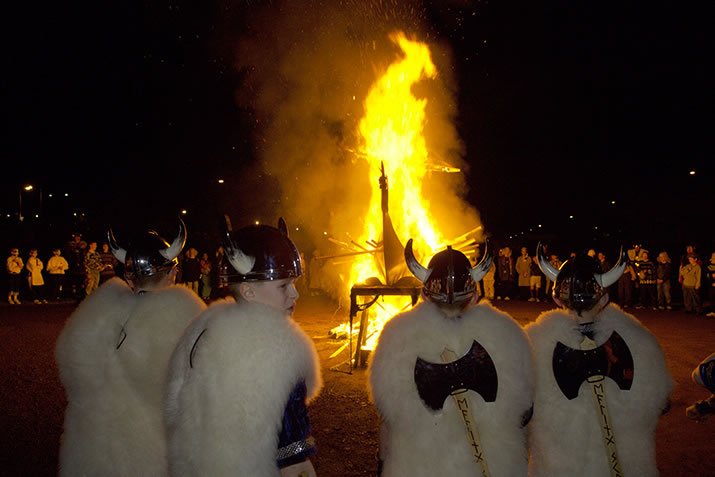 The Junior Guizers circle the North Playing Field, and then got to the centre of the field to set the Junior Galley ablaze!

The Torchlit Procession and Galley Burning

1850
All the Squads gather at the Islesburgh Community Centre where they are given torches and are directed to Lower Hillhead. The Jarl’s Squad are the only squad that dress as Vikings – all the other squads come as other characters!

1915
The Guizer Jarl’s Squad (accompanied by the Brass Band) will pass up through the ranks of the Guizers. 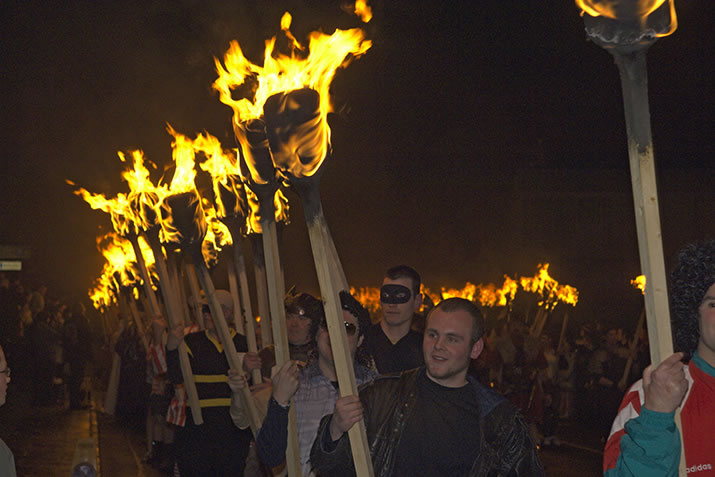 1930
A rocket fired over the town hall gives the signal for lighting the torches – a spectacular sight! The Guizer and the Jarl’s Squad will pass down though the ranks of men. After the Guizer Jarl’s Squad take up position at the front of the galley, the procession commences, singing the Up Helly Aa song through Lerwick’s streets. The Galley is moved along the streets with the Guizer Jarl aboard! 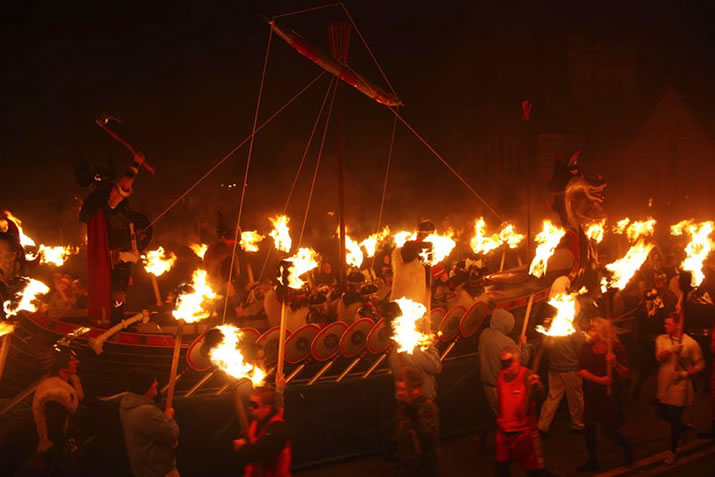 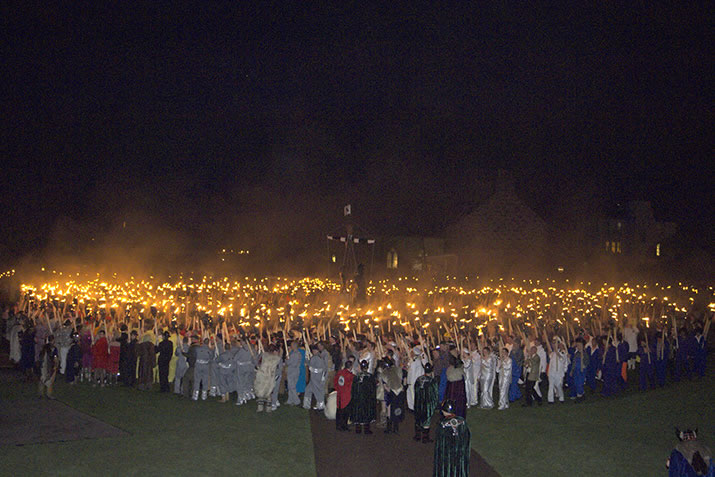 It’s worth noting that the general public are not allowed into the burning site. For photographers wishing to capture the scale of the event, you might want to step back anyway! The public are also requested to keep King Eric Street clear and to stay on the pavements. 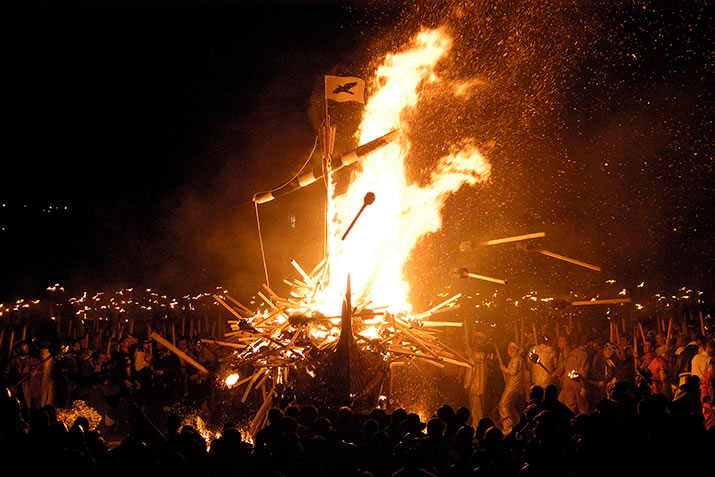 The Galley is an incredible sight to see as it bursts into flame, buffeted in the January winds. There is a fireworks display also. The Squads reform a circle and sing The Norseman’s Home before dispersing to begin their rounds of the Halls. 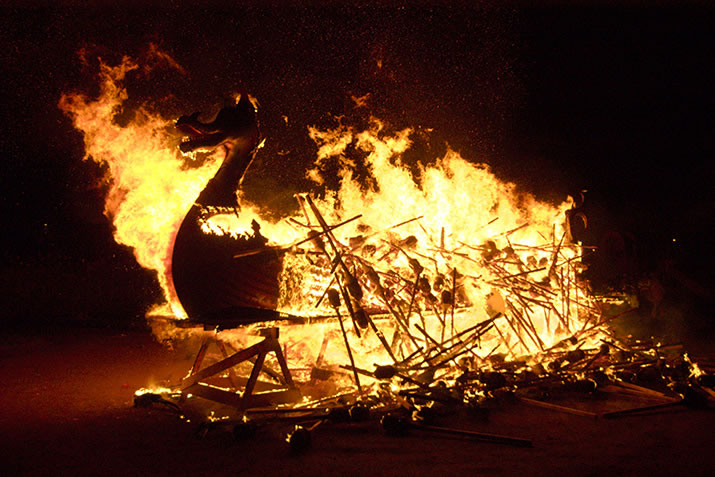 Later on into the evening

2100
The Halls open on Up Helly Aa night and the Squads visit each one with an entertaining act – a dance or skit – before moving on to the next. The Guizer Jarl’s Squad goes around in opposite direction to all the other squads. It is a tradition that every Guizer must dance with at least one of the ladies in each hall and take a dram. 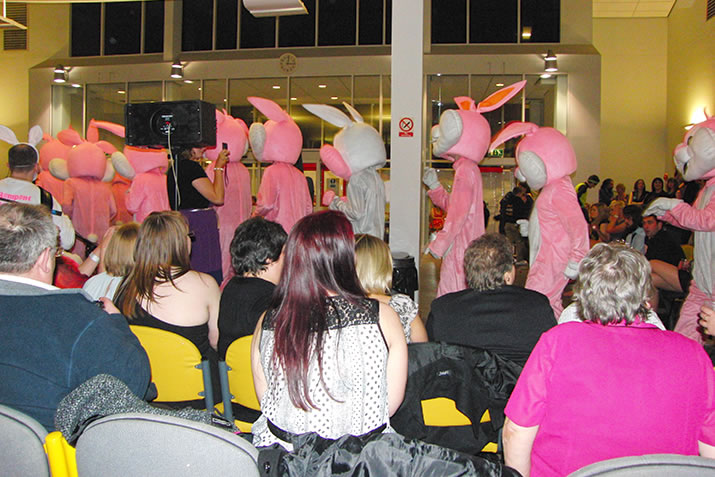 Halls open on Up Helly Aa night are as follows:

These are ticketed events organised by volunteers. The evening’s entertainment in the halls lasts well into the early hours!

2100
At the Mareel, Stand Up Helly Aa is an annual stand-up comedy show design to warm you up after the procession with laughter!

Throughout Lerwick, celebrations continue into the night.

The following day is a public holiday to allow many sore heads to recover! 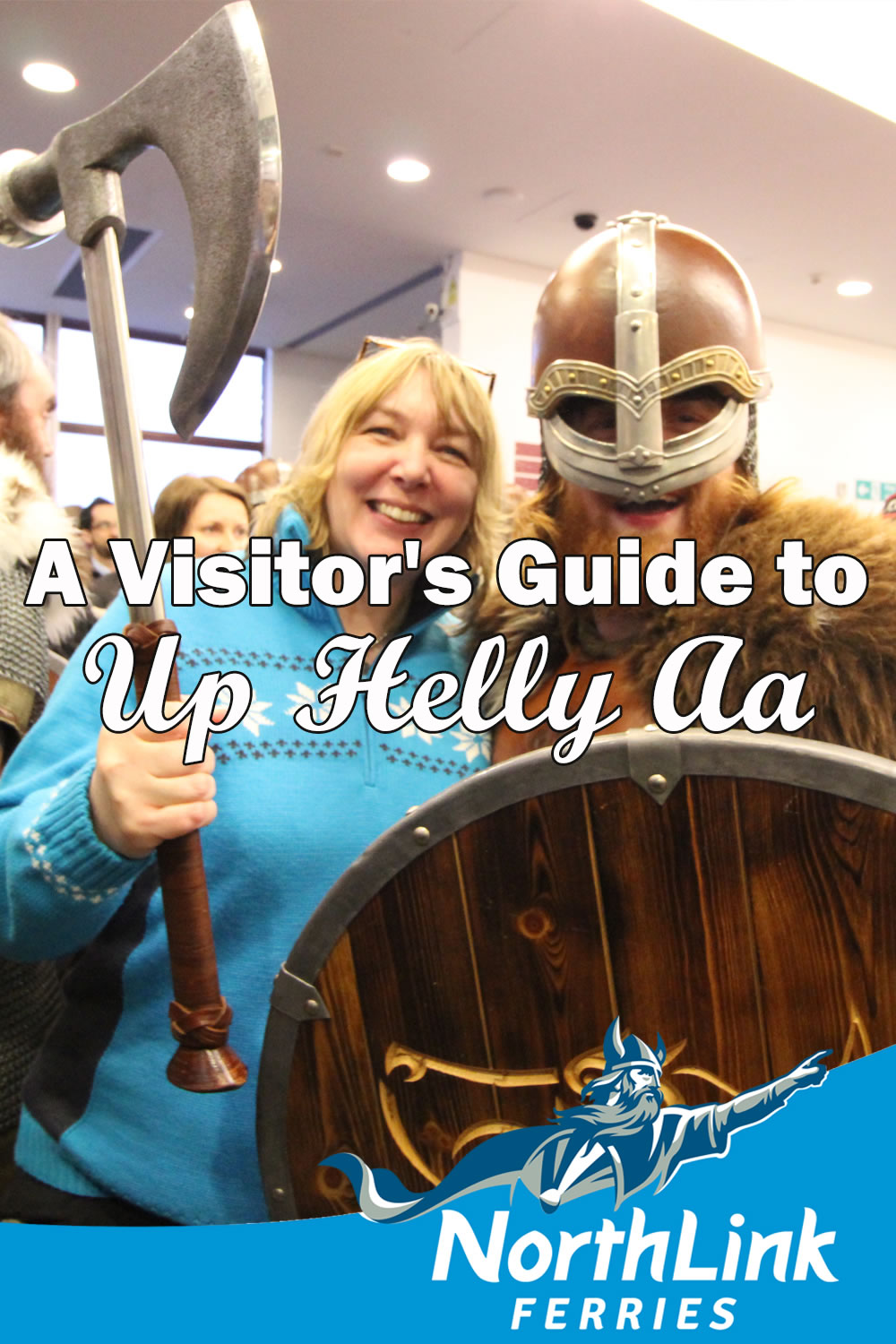