There is always more to know about a place than first meets the eye, and the Granite City is no exception! The city of Aberdeen developed as two separate towns; Old Aberdeen was based around the River Don and formed around the university and cathedral; New Aberdeen was a fishing settlement which grew around the estuary of the River Dee. We hope you will enjoy this opportunity to look closer at the history, industry, characters and castles of Aberdeen City and Shire and find out some interesting facts!

Although Aberdeen is known for its role in the oil industry it was previously famous for another industry – paper making. In the 1800s there were over 17 large paper mills which operated around the River Don. Aberdeen was ideal because paper mills needed river water both as a source of power and to treat fibres as well as a city of reliable workers.

1. The Granite City in Scotland is not the only ‘Aberdeen’ in the world.

If you look around the globe, there are over 30 ‘Aberdeens’! In America there are 18 places called Aberdeen (you will find an Aberdeen in Arkansas, California, Florida, Georgia, Idaho, Indiana, Kentucky, Maryland, Massachusetts, Mississippi, Montana, North Carolina, Ohio, Pennsylvania, South Dakota, Texas, Washington and West Virginia). There is also an Aberdeen in Australia, Canada, Hong Kong, India, Jamaica, Sierra Leone, South Africa, and Zimbabwe!

At Pittodrie, the home of Aberdeen Football Club, there have been a number of firsts. The first dugout (a sunken shelter at the side of the football field where staff and team members can sit during the game) was invented and installed there in 1931. In 1978, Pittodrie became the first all seated football stadium in Scotland. Also, the Dandy Dons are the only Scottish football team who have won 2 European trophies, winning both the European Super Cup and European Cup Winners’ Cup in 1983!

3. Aberdeen is home to one of the longest-running newspapers in the world.

The Press and Journal is the local daily newspaper for northern and highland Scotland and covers a geographic range from Aberdeen City to the Highlands and Islands. The newspaper was first published in 1747 as ‘Aberdeen’s Journal’ and was renamed when it joined with the ‘Free Press’ newspaper in 1922. It is Scotland’s oldest daily newspaper.

4. Self-sealing envelopes were invented in Aberdeen.

Although Aberdeen is known for its role in the oil industry it was previously famous for another industry – paper making. In the 1800s there were over 17 large paper mills which operated around the River Don. Aberdeen was ideal because paper mills needed river water both as a source of power and to treat fibres as well as a city of reliable workers. The largest envelope maker in Scotland was based in the Granite City and self-sealing envelopes were invented here in the late 1890’s.

5. The song ‘The Northern Lights of Aberdeen’ has an Orkney connection!

The song was written by Mary Webb who lived in London. She never visited the Granite City but wrote the song for a homesick Aberdonian colleague. The pair discussed the Aurora Borealis and later the conversation was brought up with Archie Lee, a BBC journalist who recalled seeing the ‘Mirrie Dancers’ with his mother in Orkney. The line in the song that begins “When I was a lad…” refers to Archie and his mum!

6. Aberdeen is alive with the sound of music.

The Tivoli Theatre opened its doors in 1872 and has hosted some major names in the entertainment industry. These included Charlie Chaplin, W C Fields and Stan Laurel, before the comedy partnership of Laurel and Hardy was formed. Julie Andrews, star of The Sound of Music and Mary Poppins also performed with her family at the Tivoli Theatre in Aberdeen when she was just 8 years old.

7. Aberdeenshire is fit for a Queen.

There are many castles to visit in Aberdeenshire, but the most famous is perhaps the royal estate of Balmoral which has been owned by the British Royal Family since 1852. It is no great surprise that the Royal Family choose to spend their summer in the beautiful Aberdeenshire countryside here. The Balmoral Estate is set within the Cairngorms National park and in the Lochnagar National Scenic Area. It is open to the public between April and the end of July.

8. There are craters on the moon and on Mars named after an Aberdonian.

Sir David Gill was born in Aberdeen in 1843, the son of a watchmaker. He spent two years at Aberdeen University where he developed an interest in astronomy whilst setting up a new mechanical telescope at the Cromwell Tower Observatory. Gill was noted for measuring astronomical distances (including the distance from the Earth to the sun). There is a lunar crater and a Martian crater named ‘Gill’ in his honour.

9. Aberdeen is one of the luckiest places in the UK.

While in Aberdeen you might want to buy a ticket for the National Lottery. There have been over 47 lottery millionaires made within Aberdeenshire and the AB postcode is one of the luckiest postcodes in the UK. 276 prizes of over £50,000 have been scooped by residents, with life-changing results!

The Brig O’Balgownie is situated around the Seaton Park area over a deep pool known as the Black Neuk. It was completed in 1320, making it 700 years old. The Brig O’Balgownie was constructed out of granite and sandstone and was a major route for trade and armies along the eastern coast of Aberdeenshire. It featured in Lord Byron’s poem Don Juan. When the Bridge of Don was built nearby in 1831 the Brig O’Balgownie ceased to be a major route. It is now a Scheduled Ancient Monument. 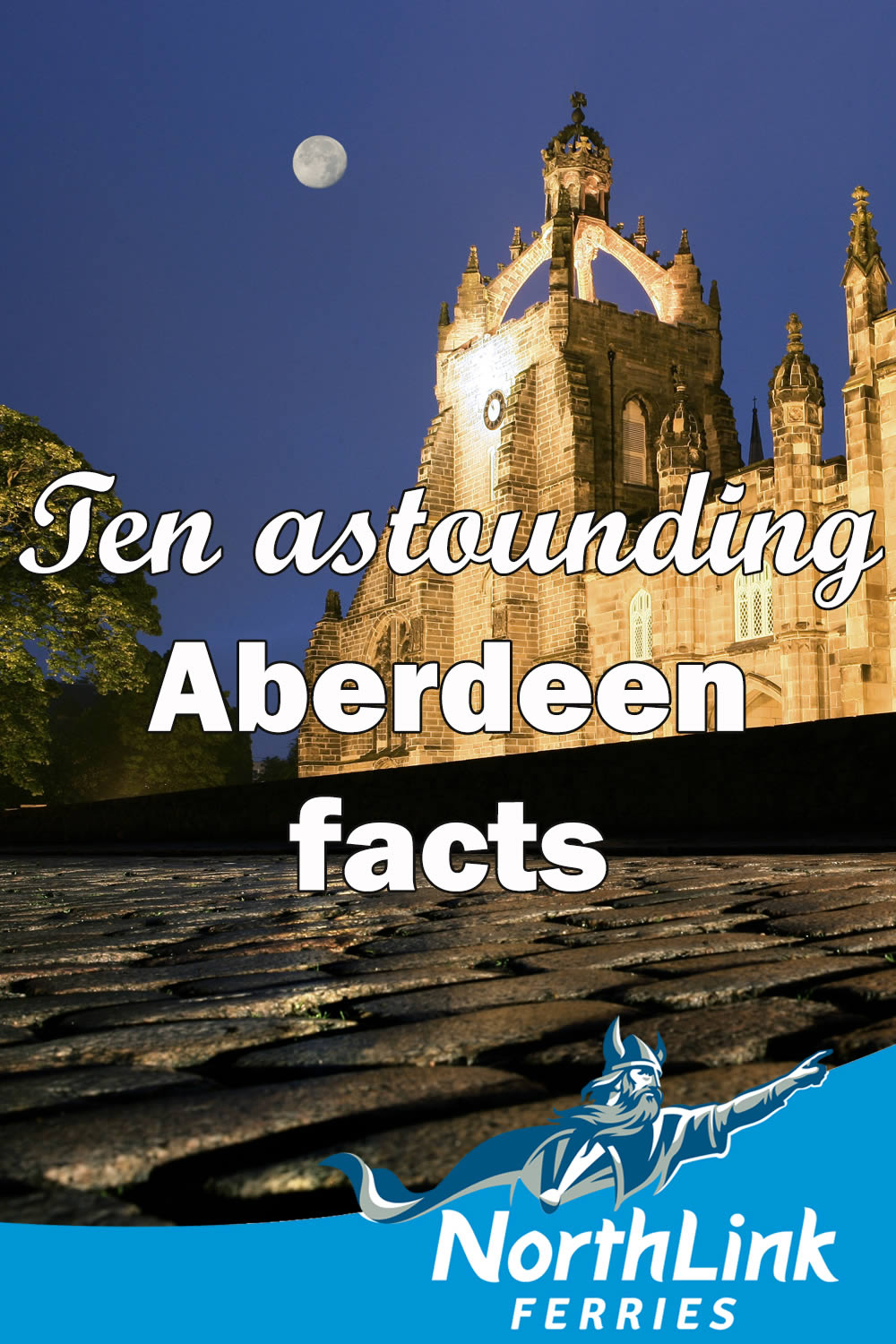 Next time you visit Aberdeen make sure you schedule some time to visit Duthie Park, Hazlehead Park, Seaton Park, Victoria Park and Westburn Park. Find out more about these fantastic green spaces in the Granite City.