Many visitors to Caithness travel to the famous landmark John O’Groats in the far north-eastern point of Scotland. It’s a pleasant place, with a small harbour, gift shops and cafes… and a signpost pointing towards Lands’ End, 874 miles away. On your visit we’d advise a small diversion along the way, walking or taking the single-track road another two miles to Duncansby Head. Here there is an impressive lighthouse and some breath-taking coastal scenery.

Though the square tower, is only 11m high, Duncansby Head Lighthouse stands on a cliff 67m above sea level, so its light is clearly visible to shipping, shining 21 nautical miles out to sea.

Duncansby Head, at Latitude 58°38.646’N Longitude 003°01.526’W, is the most north-easterly point of the British mainland. The most northerly point of the UK mainland is Dunnet Head, which is served by Dunnet Head Lighthouse. Duncansby Head Lighthouse was constructed in 1924. Although the site was considered as a potential lighthouse location in 1830, planners opted to build at Noss Head near Wick instead.

In 1914, during World War 1, a temporary fog signal and later a permanent one was built at Duncansby Head. Shortly after, a lighthouse was constructed by David Allen Stevenson. He was the last member of this family, who designed most of Scotland’s lighthouses between 1799 and 1938, to be linked with lighthouse building. The most famous member was Robert Louis Stevenson, the author of Kidnapped and Treasure Island, whose stories were inspired by trips as a child with his father to remote lighthouse locations.

Duncansby Head Lighthouse was one of only a few square towers created by the Stevensons. Painted white with a buff trim and black lantern, the tower, complete with a castellated parapet, is only 11m high. Duncansby Head Lighthouse stands on a cliff 67m above sea level though, so its light is clearly visible to shipping, flashing white every 12 seconds, and shining 21 nautical miles out to sea.

This is very much required as the cliffs at Duncansby Head guard the south-eastern entrance to the Pentland Firth, where the currents can travel at up to 10 knots. The waters of the Atlantic and the North Sea meet in the Pentland Firth, often flowing and ebbing in opposite directions, creating strong tidal streams.

When visiting Duncansby Head, can you spot the local tidal race, known as the Duncansby Bore? You will be able to see six operating lighthouses nearby, highlighting the dangers of these waters.

The view from Duncansby Head is a fine panorama, looking north to Orkney, and across Caithness and Sutherland too. Local lore tells of an important Iron Age fort that once existed here. Close to the cliff edge, the outline of a circular building, nearly 8m in diameter, could once be traced.

A hard and dangerous job

Duncansby Head Lighthouse once provided accommodation for the principal lighthouse keeper and his two assistants.  Lighthouse keepers lived in remote places and endured harsh weather. Their jobs were demanding as they had to ensure the light flashed to character at night, and they had to tend to other duties during the day. Duncansby Head lighthouse served as a communications hub for the remote lighthouses on North Ronaldsay, Stroma, Pentland Skerries, Copinsay and Sule Skerry. The keepers also needed to keep the premises neat and tidy, and occasionally apply a coat of paint.

However, it was suggested during WW2 that Duncansby Head Lighthouse was too well-painted and should be camouflaged! The white lighthouse became an attractive target for enemy aircraft. In 2nd April 1940, a frustrated German pilot, returning from a failed bombing run on Scapa Flow where a fellow pilot in a Junkers Ju 88 plane had been shot down, fired a machine-gun burst at two trawlers on the approach to Duncansby Head and also strafed the Lighthouse. Later, on 23rd June 1941, an enemy aircraft dropped a bomb on the lighthouse, but it fell into the sea 100m away. In both cases the lighthouse and those caring for it were thankfully unharmed.

Over the years there have been many changes to Duncansby Head Lighthouse. In 1968 a high-powered radar beacon was installed to aid ship navigation. In 1997 the light became automated, so a light sensor triggered the lamp on and off, meaning the lighthouse no longer required keepers. Whilst empty, the keepers’ accommodation fell into disrepair and because it contained asbestos, it was demolished in 2005. In 2019 the optic lamp was replaced by a power-saving LED, and in 2020 the former foghorn from Duncansby Head Lighthouse was moved to John O’Groats to become part of a memorial for those lost at sea.

This was particularly poignant as in 1959, 13 men lost their lives when an Aberdeen trawler, George Robb, foundered on rocks near Duncansby. 12 of the crew died, and the 13th man was a member of the Wick coastguard who had gone to their aid.

The lighthouse is now monitored remotely and cannot be accessed by the public. It is regularly visited by a local person for cleaning and maintenance, and the Northern Lighthouse Board send technicians each year to ensure the light runs as it should.

Though the lighthouse and the panorama are a compelling reason alone to visit Duncansby Head, there’s a treat to be had if you walk 1 mile south. There’s a large car park adjacent to the lighthouse on the headland, and a clearly signposted footpath to the Duncansby Stacks. Before you set out make sure you don’t leave your camera behind!

350m down the footpath is the Geo of Sclaites, a deep cleft in the cliff, which opens a large area of seabird cliff to be easily seen. You could be fortunate enough to see fulmars, guillemots, kittiwakes, razorbills, shags, and even colourful puffins nesting on cliff ledges during the summer.

Proceed further on to see the impressive Duncansby Stacks, which resemble massive fangs protruding from the sea. Over thousands of years the sea has eaten away at the soft rocks of the cliffs around them. There are two 60m tall stacks and a third stack that is still attached to the cliffs. This has a rocky arch called the Thirle Door.

Photographers can find superb shots of the stacks in their viewfinder from almost any angle and the Duncansby Stacks look spectacular in all weathers! Birds nest on them and seals can be spotted hauled out on the shore below. Visitors can walk right up to the stacks and even go beyond them for a great photo looking northwards. We have seen some superb images which capture the Northern Lights, the Duncansby Head Stacks, and the lighthouse together.

We should be thankful that we can see the Duncansby Stacks today. According to The Sunday Post, in 1953, in a bid to keep up with America and Russia in the nuclear arms race, experts at the headquarters of the UK’s nuclear weapons programme planned to test the detonation of an atomic bomb. Remote parts of the UK were suggested, including the Duncansby stacks. Thankfully this plan was abandoned because of fears that the bomb’s complicated electronics might get wet. Instead, the test went ahead in 1953 at Emu Field, an area of desert in South Australia.

We hope you enjoy your visit to Duncansby Head; a dramatic place with some fascinating stories to tell! 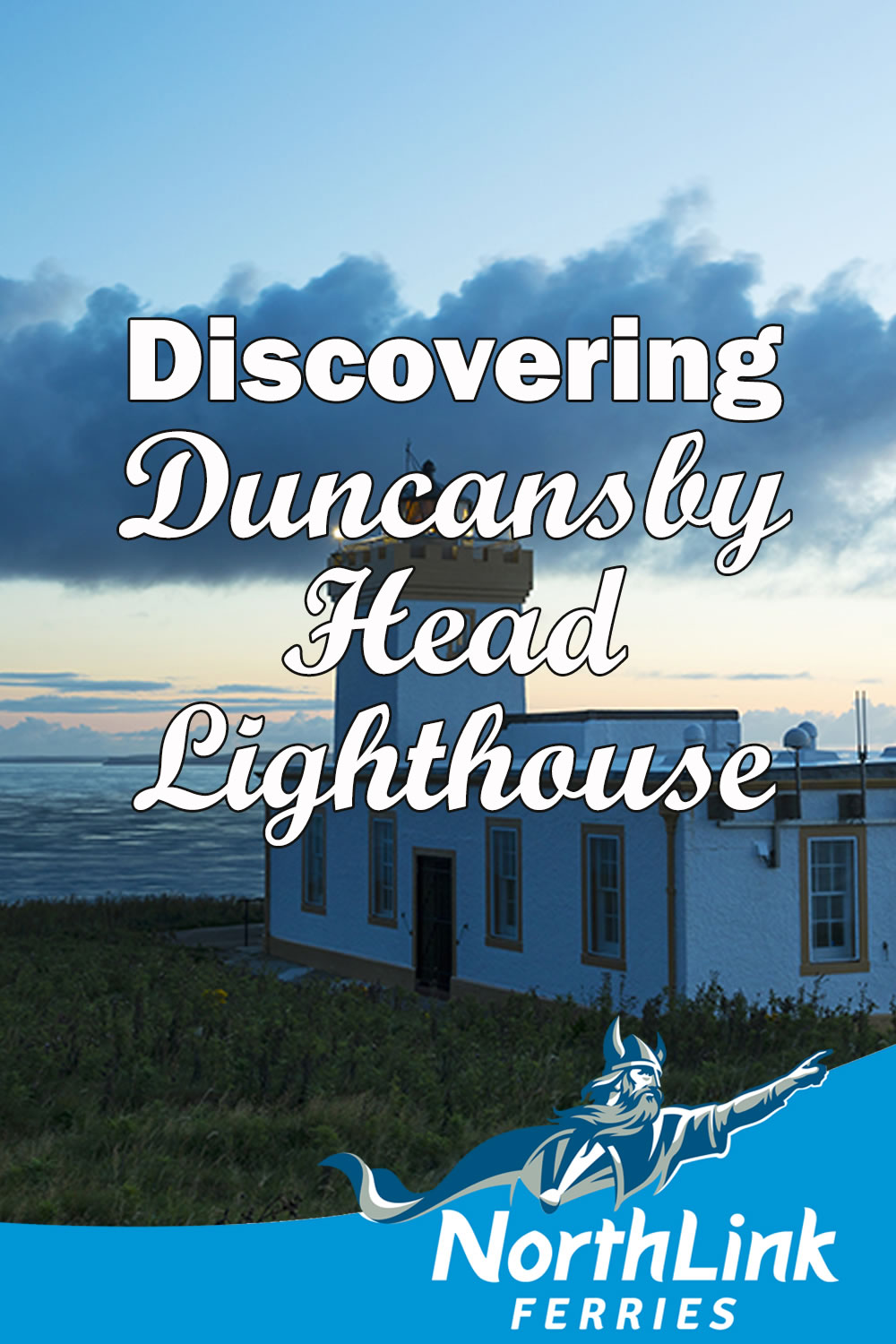 NorthLink Ferries enjoyed a conversation with John Drummond of Thurso River Ltd who told us about his passion for the outdoors, explained why Caithness is a great place to go salmon fishing and offered some tips on finding the perfect catch.