Early in the Second World War, a disaster befell the British Fleet which used the natural harbour of Scapa Flow in Orkney as a base. In October 1939, whilst most of the Fleet were away on exercise, and on a night with a high tide, a German submarine, U47, sneaked in through Kirk Sound and torpedoed the anchored battleship, The Royal Oak. The ship sank with the loss of 833 crew. To prevent a similar attack in the future, Winston Churchill approved the building of four barriers between the southern isles to block the eastern approach to Scapa Flow.

As there was a local labour shortage, 550 Italian prisoners of war, captured in North Africa, were brought to Orkney in early 1942 to assist with this collosal project. Many of them were based in Camp 60 on the uninhabited island of . Under treaty, POWs couldn’t work on military projects, so the barriers became causeways, which would link the southern islands of Orkney together.

“The tabernacle was made from wood obtained from a wrecked ship. The alter was made from concrete. The light holders were made out of corned beef tins. The baptismal font was a car exhaust covered with concrete!”

Building the Churchill Barriers was an incredible task. To create the foundations a ¼ million tons of stone was laid on the sea-bed. On top of this was built the causeway, from 66,000 huge blocks of concrete, some weighing five and some weighing 10 tonnes each! Along the sides of the barriers, concrete blocks were placed at varying angles to prevent the sea from sweeping over the road that runs along the top.

The Italian’s camp consisted of 13 huts and was rather gloomy, but in their spare time the prisoners planted flowers and made concrete paths (the POWs daytime job allowed them access to lots of concrete!) A theatre with scenery was created and a recreation hall, complete with three concrete pool tables was built in Camp 60! An artist from Moena, Domenico Chiocchetti, made a statue of St George slaying the dragon for the ‘square’. It had a frame made of barbed wire and was covered with cement. The base of the statue contained all of the prisoners names and some Italian coins and the statue itself represented the prisoners triumph over defeat and loneliness during the years of captivity on Lamb Holm.

In 1943, it was agreed between Major Thomas Pyres Buckland, Camp 60’s new commandant, and Father Gioacchino Giacobazzi, the Camp’s priest, that a place of worship should be built. Two nissen huts were joined end-to-end with the intention of creating a chapel at one end and a school at the other. Domenico Chiocchetti did most of the interior decoration. The other principle men that worked on the chapel were Buttapasta, a cement worker; Palumbi, a smith; Primavera and Micheloni, electricians; Barcaglioni, Batto, Devitto, Fornaiser, Pennisi, Sforza and many others.

The corrigated interior was hidden by with plasterboard. The tabernacle was made from wood obtained from a wrecked ship. The alter was made from concrete. Scrap metal was used – two candelabra were forged from iron by Palumbi, and two were forged from brass by Primavera. The light holders were made out of corned beef tins. The baptismal font was a car exhaust covered with concrete! The sanctuary’s gold curtains were bought from a firm in Exeter using money from the prisoners’ welfare fund.

The painting of Madonna and Child surrounded by cherubs at the altar was inspired by a prayer card that Chiochetti carried throughout the war. It is Chiochetti’s masterpiece and it carries a moving message – “Regina pacis ora pro nobis” (Queen of Peace pray for us). Baby Jesus holds an olive branch and one cherub holds a blue shield, the badge of Moena, depicting a boat moving out of tempests into good weather. Another cherub is sheathing a sword.

The beautiful rood screen and gate was made by Palumbi out of wrought iron and took four months to complete. There is a tiny metal heart in the floor under the gates – a symbol of Palumbi’s love for a local girl. He already had a wife and family back home in Italy, so he left his heart behind. The rest of the chapel was now looking a bit drab, so Chiochetti covered it with plasterboard and painted it so that it resembled brickwork and carved stone. At this point he received help from a painter from another camp.

With the interior of the chapel looking so splendid, attention was turned to the exterior. The exterior was covered in a thick layer of concrete. At the front of the chapel, Buttapasta made an impressive facade with pillars to conceal the ugly nissan hut and make the building look like a church. Pennisi moulded the head of Christ out of red clay.

The Italian Chapel was only used for a brief time before the prisoners returned home on 9th September 1944. A special service was held, incorporating the bells and Choir of St Peter’s in Rome, provided by gramophone records in the vestry. Chiocchetti remained behind for two weeks to complete the font.

After the war the Italian Chapel become an extremely popular place to visit, but it also began to deteriorate. In 1958, the Chapel Preservation Committee was established. With financial assistance from the BBC, Domenico Chiocchetti was traced to his hometown of Moena and was asked to return to Orkney for three weeks in 1960. Along with Mr Stanley of Kirkwall, he assisted with the restoration of the paintwork. Later a bitumenised waterproof covering was added to the roof.

In 1961, the carved figure of Christ, which stands at the chapel entrance, was gifted by Chiocchetti’s home town, Moena. The cross and canopy were made in Kirkwall. When Chiochetti returned in 1964 with his wife Maria, he brought the gift of 14 lovely carvings of the Stations of the Cross, which are hung on the walls of the Italian Chapel to this day.

Though Chiochetti was too ill to return in 1992, a group of eight former prisoners returned to the Chapel for the 50th Anniversary of their arrival on Orkney. Domenico Chiocchetti died in 1999 in Moena, aged 89. These days the Italian Chapel receives 100,000 visitors every year. For opening times and visiting fees please visit https://www.orkney.com/listings/the-italian-chapel 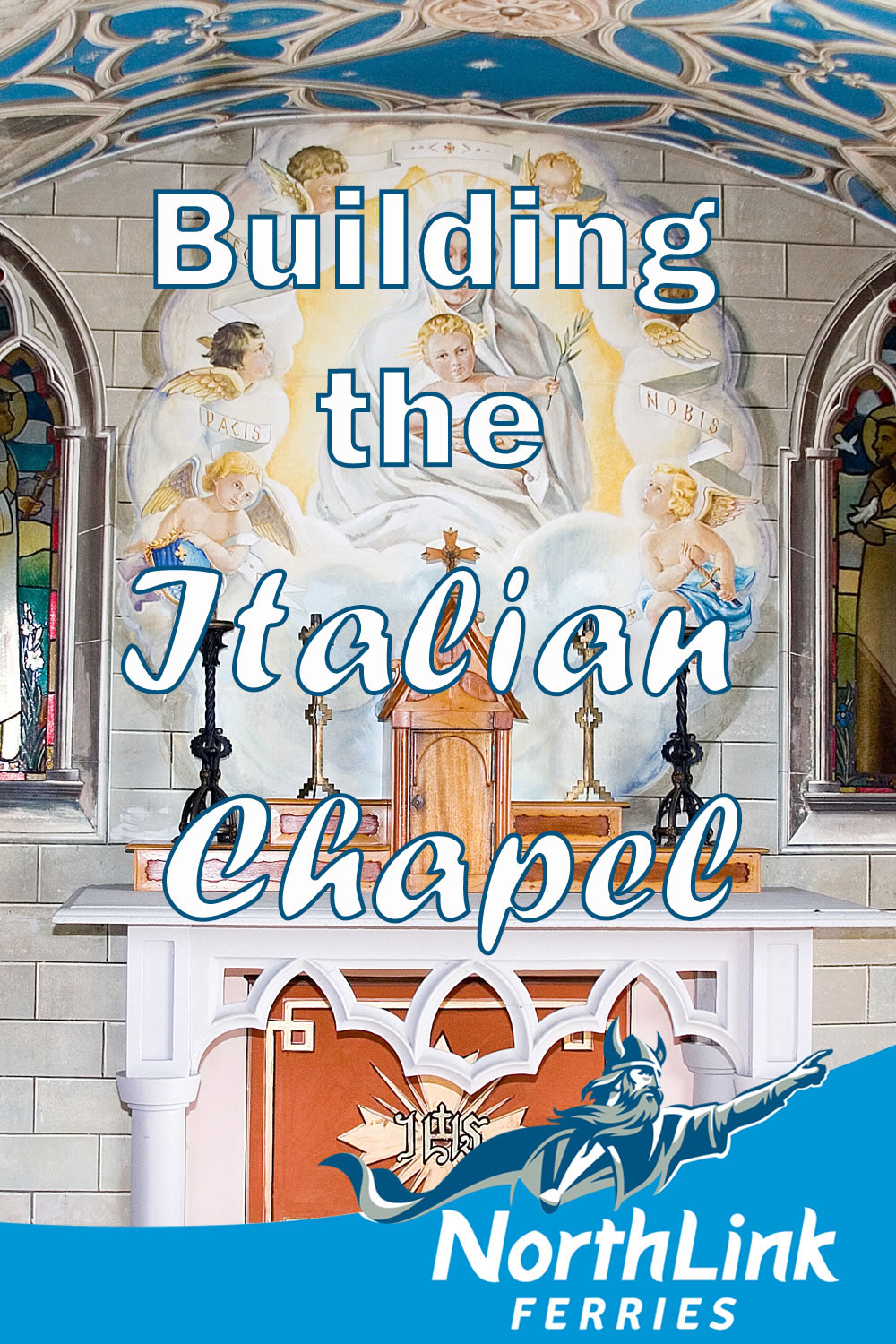