Please note: Business Vehicles must be booked via our Freight Department by calling 08001114434

Throughout the islands of Orkney there are many distinctive beaches to discover. In anticipation of warm weather this summer, we thought we’d display a list of the fifteen best – most beautiful, peaceful, atmospheric, and fun – beaches to visit in Orkney!

Waulkmill Bay in Orphir is a long sandy bay facing Scapa Flow. When the tide comes in, the water in the bay is shallow – making it the ideal beach for paddling.

Located on the island of Hoy, Rackwick is a six mile walk from the foot passenger ferry from Stromness to Moaness and a 12 mile drive from Lyness, where the car ferry from Houton arrives. It’s well worth the effort though – a beautiful quiet beach, Rackwick has giant rounded pebbles, golden sand and two massive cliffs at either side of the bay! The history of Rackwick is also fascinating – read more here.

The Brough of Birsay

A tidal island attached to the North West Mainland of Orkney, the Brough of Birsay can be reached by causeway when the tide is low. The beach here is popular – it has great rockpools full of hermit crabs – and the sand is made of fragments of shells. It’s also a great place to find Groatie Buckies! Put one of these in your purse and you’ll never be poor.

The Bay of Skaill

Located on the west coast of the Orkney Mainland, the Bay of Skaill is a wide expanse of sand facing the Atlantic, and big waves sweep in here. At the south side of the bay there’s the Hole o’ Rowe – a sea arch that the sea explodes through on a wild day. The Neolithic village of Skara Brae is located here – making the beach a must-see on a trip to Orkney!

Located to the east of Kirkwall, right next to Kirkwall airport, Inganess is a very fine stretch of sand, perfect for a walk and perfect for dogs and their owners. Out in Inganess bay is the wreck of the Vardefjell, which was sunk as a blockship to prevent enemy access to Scapa Flow during WW2. It was then refloated in 1942, initially for salvage, but when it was realised it could not make the journey, it was towed to Inganess. There is a good walk following the course of Wideford Burn nearby, a small loch, and lots of birdlife to admire at Inganess beach too.

Waulkmill Bay in Orphir is a long sandy bay facing Scapa Flow. When the tide comes in, the water in the bay is shallow – making it the ideal beach for paddling! Car parking is on the road above the beach (there’s a toilet there also), and there’s a walk down some steps (with some slippery stones at the bottom), so a trip to this lovely beach is only for the sure-footed.

Sanday is famed for its many fine beaches, including Whitemill Bay, Lopness, Sty Wick, Scuthvie, Sandquoy and Tres Ness. Tres Ness (pictured at the top of the page) is backed by amazing sand dunes. We’ve picked Backaskaill beach as our favourite though – it’s a lovely peaceful long sweeping beach with white sands and is a great place for shell hunting.

On the south-east side of South Ronaldsay is the rocky shore of Windwick Bay. Visitors may think the name is the result of how exposed this shore is, but it actually comes from the Old Norse Vin Vik, which means ‘meadow bay’. Windwick is a great place to see seals and seal pups, and there is a super walk across the cliffs to the north These cliffs were the site of a wartime tragedy, when two Destroyers (HMS Opal and HMS Narborough) blinded by a snowstorm, ran into the cliffs at full steam. There was only one survivor.

Grobust beach in Westray is one of many fine beaches on the island. Located close to Pierowall in the North of the island this lovely sandy beach is notable for amazing coastal scenery and archaeological finds (at Queena Howe and the Links of Noltland) as a result of the shifting dunes. Grobust is exposed to the north and can be spectacular in a gale!

Located in South Ronaldsay on the road from St Margaret’s Hope to Hoxa Head, the Sands o’Wright is a south facing beach with fine sand. Once a year, in August, the Sands o’Wright becomes the location for the Boy’s Ploughing Match. In this competition, boys use miniature ploughs (often handed down through generations) to cut the straightest furrows in the sand! Find out more about South Ronaldsay here.

Warebeth beach is located just outside Stromness, and there’s a lovely walk to be had along the west shore, taking in the Hoy hills, to Warebeth. Named after the large amount of seaweed, or “ware” that gets washed up here, Warebeth is a lovely sandy curving bay, and the sandy car park is testament to the Atlantic winds that blow in here. The scenery of Hoy Sound is superb and it’s a great place to watch MV Hamnavoe on her sailing to and from Orkney.

Aikerness beach is in Evie, facing Rousay and Eynhallow, situated next to the Broch of Gurness. The local pronunciation of Aikerness led to the naming of Gurness! The beach itself is a beautiful long stretch of sand with tropical looking waters which is backed by wildflowers. One side of the long beach can be reached from Gurness and the other side (where there is a car park and toilets) can be reached from a road in the middle of Evie village which stretches shorewards.

We have a soft spot for Newark Bay in Deerness. It is a lovely curved sandy beach bordered with wildflowers, easy to reach thanks to the road to the nearby slipway (which is operated by the Deerness Small Boat Owners Association.) The shore here is famous in Orkney folklore, as, for several summers around 1890 a mermaid was sighted there. She was described as having golden hair, snow-white skin, and a fishy tail!

Dingieshowe beach is located in Deerness in the East Mainland of Orkney. There’s a car park here with toilets and then a short walk over a sand dune to this spectacular south facing beach. Children will have a great time paddling in the water and exploring the rockpools for little fish. Adults can enjoy the fine views of Copinsay and shelter from the wind provided by the dunes! The ‘howe’ from the Old Norse name comes from the Iron Age broch hidden in the dunes.

Located between Burray and South Ronaldsay, the creation of man-made Churchill Barrier Number 4 has caused a massive build-up of sand to the east. The curving beach that has formed here in just 75 years is simply amazing. Sunken blockships that were previously underwater have now been all but completely buried by the sand! There is a handy car park here and toilets too.

One of the hardest to reach beaches on this list, we would still say this beach is one of our favourites. You will need to take a ferry to Egilsay and walk across the width of the island (following the track to and past the St Magnus Cenotaph) to the opposite shore. This is a beautiful beach, secluded with soft sand, water perfect for paddling, and a picnic table. The views of the North Isles shipping lanes are great too. Read about our day on Egilsay. 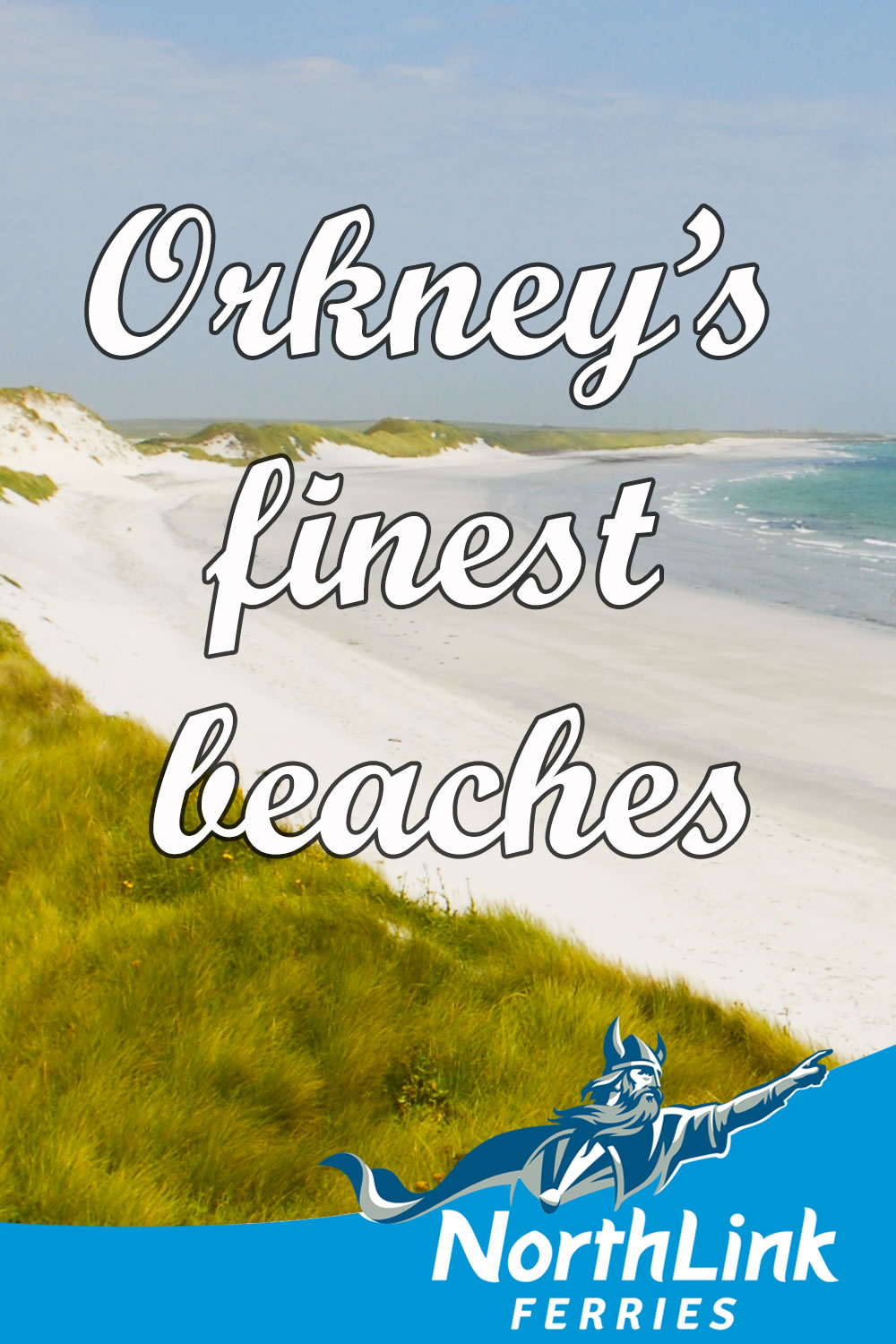 A walk from Yesnaby to Skaill

A very fine walk in Orkney is from the Yesnaby cliffs to the Bay of Skaill, hiking along the cliffs of the West Mainland. Head to Yesnaby and walk north to see an Iron Age broch, amazing fossils and much more!

12 great places to see in Sanday

We spent a couple of very fine days on Sanday this summer. The largest of Orkney's North Isles, it is a fascinating and friendly place, with some stunning white beaches backed by impressive dunes. We've compiled a list of 12 great places to visit in Sanday in Orkney.

All about Orkney Ice Cream