Scapa Flow was the main naval base for the British Home fleet during both World War 1 and World War 2. It was used because the area featured a large landlocked harbour, and its deep entrances were useful for getting large ships in and out of the bay. It also featured deep water anchorages which were useful for the navy.

During World War 2, Orkney acted as a base for training and repairs for many of the aircraft from aircraft carriers, although it took some time to make the harbour secure for use as a base, in both wars. Orkney was so important to the war effort that there were up to 40,000 men stationed there at the peak of World War 2. To put that in perspective, in 2017, the population was only 22,000.

At present day, there are many shipwrecks in Scapa Flow that can explored by divers and several where it is prohibited to dive and explore.

The German High Seas Fleet arrived in Scapa Flow on 23rd November 1918 when 74 German ships were interned there. On that day, almost the entire fleets of both Germany and the United Kingdom were anchored at Scapa Flow, it is known as perhaps one of the greatest naval phenomenon on the planet.

Just 7 months later, nearly all of the ships would sink because of direct orders from the commander in chief, Ludwig von Reuter.

On the 21st June 1919, Ludwig Von Reuter ordered every ship to scuttle under the belief that the British were going to seize the fleet. Some ships were beached but most of the ships in the German fleet sank on that day in 1918; most of the fleet was then salvaged during the 1920’s and 1930’s.

By the year 1945, at the end of World War 2, only 3 battleships had been left behind that divers could visit; these were the König, the Kronprinz Wilhelm and the Markgraf. There are also two large debris sites from the Bayern and the Seydlitz.

There were 5 battle cruisers, 11 battleships, 8 light cruisers and 50 motor torpedo destroyers in the fleet; today, only four battle cruisers and three battleships still lay on the seabed at Scapa Flow between 45 and 12 metres below the surface and present distinct diving experiences that you can’t get in many other places in the world. The German fleet is protected under the ‘Protection of Wrecks Act, 1973’ so they can’t be tampered with in any way.

The 5 German battle cruisers that sank on that day were:

The 11 German battleships that sunk were:

The König, Markgraf and Kronprinz Wilhelm were all König class battleships, because of this; all 3 ships are almost identical. The König (pictured above) sank at 14:00 on 21st June 1917. It’s in a state of deterioration due to a salvaging company blowing its hull apart in the 1960’s and 1970’s as part of a search for scrap metals. There are large amounts of marine life growing on the decaying flat sections of the Hull.

The Markgraf lies on its port side with its starboard underside still exposed. The grave of the Markgraf’s captain, Lt-Cdr Walther Schumann, can be found at the Lyness Naval Cemetery.

The Kronprinz Wilhelm was the last of the König class battleships to be built, and it is also the most damaged of the three ships which weren’t salvaged. Like the König, the Kronprinz Wilhelm has lots of marine life growing on it (including plumose anemones; starfish; sea urchins; shrimps and crabs)

If you would like to dive and visit the German Fleet, you need to get a diving permit from the Orkney Islands Council Harbours department. The salvaging company that owns the Karlsruhe II (pictured above) allows diving on the ship, but divers are prohibited from taking any salvage from the wreck of the ship.

The light cruisers in the German fleet are:

In the German fleet, there were 55 destroyers from 5 flotillas; only 5 of the torpedo boats are divable to this day. There wasn’t much to distinguish the German destroyers and large torpedo boats back in World War 1; in fact the term ‘destroyer’ only came into effect in 1914/1915 when the B97 class was built. Before then, torpedo boats and destroyers weren’t named and were instead identified using a number and letter signifying the naval yard that it was built in.

Other Wrecks in Scapa Flow

Many of the German wrecks in Scapa Flow are from 1919, but there is a sunken World War 2 ship, called the F2 (pictured above), near the Scapa Flow Visitor Centre and Museum in Lyness on the island of Hoy. The F2 was built in 1936; it was converted into a torpedo recovery boat at the beginning of the war and was captured not long after. It was eventually sunk after the war had ended in 1946.

According to a local story, a group of salvagers removed parts of the ship, including an important piece of brass metal which made the ship sink when it was removed. It was purchased in 1967 by Metrec engineering to be salvaged. The mid to aft sections of the ship have been completely destroyed in the process of a search for metals from the wreckage. It is said to not be a particularly difficult dive to compete.

The YC21 is connected to the F2 by a 30m line. It was a salvage barge which was used to salvage parts from the F2; the 20mm Gun from the F2 can still be found on the wreckage of the YC21, because it sank whilst salvaging parts from the F2.

The Orkney Islands are home to three naval war graves. The HMS Royal Oak is the most well-known of the three. Of the other two war graves, one is located outside of Scapa Flow; the other is north of the oil terminal on Flotta. These ships are the HMS Hampshire and the HMS Vanguard. War graves are protected under the ‘Protection of Military Remains Act 1986’, which means they cannot be disturbed and divers are prohibited from getting too close to them.

The HMS Hampshire is not located in Scapa Flow; it is located just of Marwick Head along the west coast of the mainland. The minister of war during World War 1, Field Marshall Lord Kitchener, and his staff were sent to Archangel, Russia to help set up the defences there. He was advised to not take the western route out of Scapa Flow because a German submarine (U-75) had recently been spotted in the area and had placed a number of mines. HMS Hampshire still took the western route on the 5th June 1916. It is presumed that the HMS Hampshire was blown up by a mine, though there are other conspiracy theories as to the reasons behind the sinking. Of the 655 officers and men on board, only 12 men survived and made it to shore that day.

The HMS Royal Oak was commissioned in 1916 and built at the naval dockyards in Plymouth. It sank in World War 2 due to an attack on the ship by the Germans in the early hours of October 14th 1939; just 6 weeks after the war began. The German U-boat U47 came through Holm Sound torpedoed the HMS Royal Oak which was anchored in Scapa Flow, because it was no longer suited for front-line duty, killing 833 crew members who were on board at the time.

As a direct response to this, the Churchill Barriers were built in order to further protect Scapa Flow from incoming threats from the east. They also helped to connect several of the islands together with a road, allowing for easy travel between them. The wreck of the HMS Royal Oak became an environmental risk because it was leaking large amounts of fuel oil, the Royal Navy responded by removing the oil and cleaning up the area.

The HMS Vanguard was a ship that sank in World War 1 due to an accidental explosion, killing over 700 people. The HMS Vanguard was one of the first of the new style of Dreadnought battleships (St. Vincent Class). It was a fast ship for its time and size, being able to reach speeds of over 20 knots (23mph). The ship blew up on the 9th July 1917 after being out on an exercise during the day. Several of the officers had left the ship for the night in order to attend a concert on the HMS Royal Oak. Just before midnight, the ship was hit with a massive explosion which ripped through the ammunition magazine. 98 men survived out of the 804 crew members, 95 of those men weren’t on board the ship at the time of the explosion.

Rumours of sabotage started after a German letter, bible and a photo of a German woman were discovered in the wreckage. It was also discovered that the civilian ordinance fitter, who had left the ship right before it blew up, was the same man who had been on another ship, the HMS Natal, when it blew up under the same circumstances just 2 years before. The ship was salvaged extensively and its remains are broken up in 34 metres of water.

The Barrier block ships are ships that were purposely sunk along the sea floor at the entrances to Scapa Flow in World War 1 and World War 2 as a temporary solution to prevent the German Ships or submarines from entering Scapa Flow.

On average, the depth of the barrier block ships along the Churchill Barriers is 8m on the seaward side and 12-20m on the Scapa Flow side. Many of the block ships aren’t worth the effort of diving to see them, because they are now well broken up, whether that is through time or because of salvaging; several others have been completely obscured under the sea floor.

Most of the diving on Barrier I is done on its west side. There are several sunken block ships located here from both world wars.

To dive here, for safety, it is preferable that you have some wreck diving experience.

Barrier II is the most popular barrier for divers, and a few of the ships are suitable for beginner divers as well, partly down to the fact that it has shore access directly to the blockships.

Barrier III is located on a steep bend between two islands.

No diving usually takes place near Barrier IV, since the construction of the barrier has changed the area’s ecosystem in the 75 years since its construction. Sand has built up on the East side of the barrier and the block ships here are all being hidden under the beach.

It was deemed to be too expensive to build a fifth Churchill Barrier to bridge the gap between the islands of Graemsay and Hoy. So the British Navy stuck with using block ships for this area.

By Caleb Bowd
Born and raised in England, Caleb has a real passion for technology and games. He’s a big fan of football, having supported Arsenal for his whole life. 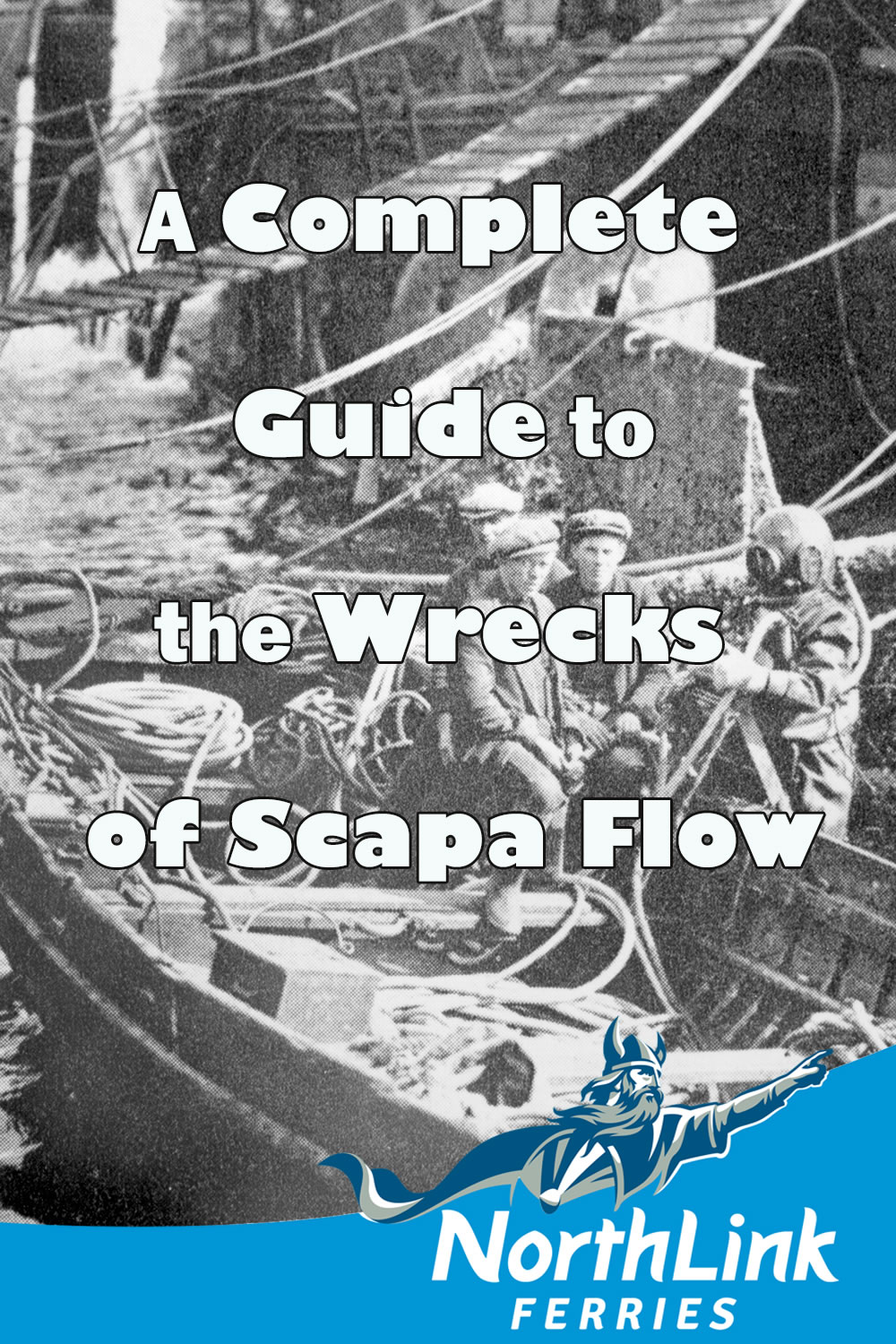 Following a public statement from the First Minister on Sunday 22nd March 2020 regarding travel we have had to make some changes to the way people book, and indeed who can travel. The First Minister stated, ‘from now on ferries will be for those who live on our islands, who have an essential need to travel to or from the mainland and for essential supplies or business.’