On the volcanic trail at Eshaness

The rugged cliffs at Eshaness are pretty unrivalled in terms of sheer breath-taking beauty, geology and archaeology.

The area around Eshaness is geologically fascinating; the cliffs show a series of lava flows dating back millions of years to a landscape of volcanoes, fire and lava.

A trip to Eshaness is usually high up on many travellers ‘Shetland adventure bucket-list’, and this guide by Laurie Goodlad, writer and Shetland with Laurie tour guide will walk you through the area.

Eshaness is an exposed peninsula in the north-west Shetland Mainland, about an hour’s drive from Lerwick. Head north on the A970 until the double road ends and follow the signs for Eshaness. Public transport is limited, and we would recommend hiring a car or a local guide.

Park at the lighthouse for the cliffs and coastal walk. The lighthouse was built in 1929 by David and Charles of the famous ‘lighthouse’ Stevensons. With its 12 metre tower, the lighthouse here was the last Stevenson built lighthouse constructed in Shetland and, until 1974, was manned by a lightkeeper who lived in the accommodation adjacent to the light. Today the buildings are owned by Shetland Amenity Trust and are rented out to holidaymakers.

The area around Eshaness is geologically fascinating; the peninsula was formed about 360 million years ago when Shetland lay close to the equator, and the cliffs show a series of lava flows dating back millions of years to a landscape of volcanoes, fire and lava.

From in front of the lighthouse, by the cliff edge, the Kirn o’ Slettans is a blowhole that plunges vertically into the sea below. This feature is thought to have been a side vent/cone in what was the Eshaness volcano. The coastline at Eshaness is said to be the best example of a section through the flank of a volcano in the UK.

Looking out to sea to the north-west you see a small island, Muckle Ossa, (pictured above on the far left) which is probably the solidified lava vent channel which would have fed the main vent and, on a clear day, it’s possible to see the Clair oil field 75km (47 miles) west of Shetland.

Walking along Calder’s Geo, which runs parallel to the road and car park, you are tracing the perimeter of an old sea cave that has seen the collapse of the roof, creating a geo (a cleft in a rock).

The cave at Calder’s Geo is said to be Britain’s largest sea cave. A recent scientific study of its inner chambers found that the true dimensions of the cave are greater than previously thought; 60ft tall and spanning a floor area of 5.600 square metres. This makes it one-and-a-half times bigger than the cave at Cheddar Gorge in Somerset. If you fancy a go inside this cave, you’ll need a calm day and a kayak!

Fantastic footage inside the cave can be viewed here.

If you continue along the Eshaness Circular walk (details of which can be found here), you will come to the Hol’s o’ Scraada, a collapsed sea cave 100 metres inland from the sea. It is called the ‘Hols’ (holes) because at one time there were two holes, but in the late 19th century, the land bridge separating the two collapsed soon after a horse and cart passed over, so now it is one large void in the land. It is an exceptional place to visit as the sea washes in on a stony beach inland from the coast.

Beyond the Hol’s o’ Scraada lies da Grind o’ da Navir; a breathtaking natural amphitheatre carved out by the power of the sea, yet formed by lavas and distinctive reddish/pink ignimbrite rock. The sea is pushed up a ‘ramp’ from the sea bottom and forced through the natural U-shaped fissure in the rock. On a fine day, it frames the vast Atlantic expanse and is a great place to chase a sunset. On a stormy day, you are advised to keep well back as the sea tears through the rock, carrying large boulders with it and depositing them inland, creating a storm beach, when its sheer power is exhausted.

Walking back, head towards the Hol’s o’ Scraada and trace the burn (stream) up to the Loch of Houlland. You will pass old watermills, similar in style to the Norwegian click-mills, these were used into the early 20th century across Shetland for grinding grain. Beside the loch lies the ruins of the Broch of Houlland, a 2,000-year-old Iron Age round tower which would have once stood proud, commanding the area.

Eshaness truly is a marvel, and you should allow a few hours to explore it and soak in the dramatic sights fully. Be sure to wear walking boots as the ground can become slippery when wet, and the route is uneven in places.

Other things to do in Eshaness: 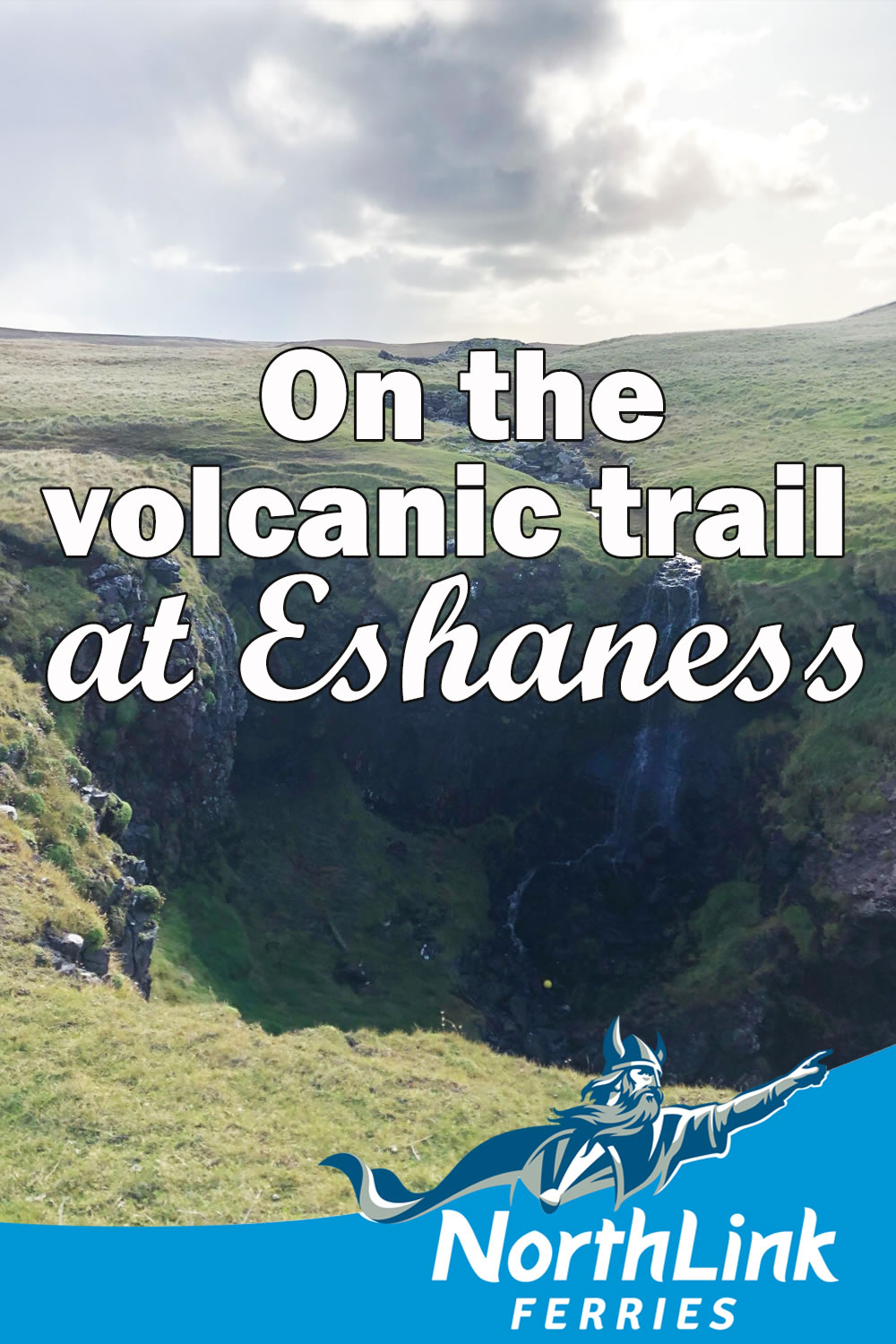