Fifteen fascinating facts about Stromness you may not know!

Stromness is a remarkable and beautiful town. It has a salt-encrusted history full of pirates, whalers and explorers. One can only imagine the excitment of seeing the sails of visiting tallships entering the harbour. NorthLink Ferries are very proud that our ferry Hamnavoe arrives in Stromness; the town offers a wonderful first impression for visitors to Orkney.

Stromness once had its own newspaper, The Stromness News, which was published in 1884. It only lasted for six months due to lack of news!

We’ve compiled fifteen fascinating facts about Stromness you may not know!

1. On Ness Road in the South End of Stromness, you’ll see a large and handsome building. This is the Suleskerry Shore Station, which was built in 1892. It was built to house the four families of the lightkeepers who worked on Sule Skerry, a remote island 41 miles west of Orkney. The Lighthouse Depot and former ‘Pole Star’ pier can be seen on Alfred Street. ‘The Pole Star’ and ‘Pharos’ were ships which worked for the Northern Lighthouse Board.

2. Stromness had many famous visiting ships, but none more so than Captain Cook’s ships, ‘Discovery’ and ‘Resolution’, which called in to the town in 1780. On board were 180 crewmen who were making their first British landfall after Cook had been killed in Hawaii during a four year voyage to find the northwest passage through the Bering straits.

In order to pay for diversions in port, the crew sold many of Cook’s items in advance of wages, and so many historical artefacts from Captain Cook’s voyages ended up in Orkney. George Low, an Orkney naturalist, did very well; Cook had been collecting specimens of natural history from the south seas. Captain Cook’s dinner service can be seen in Skaill House and more items, a tea set and spears from the South Seas, are housed in Stromness Museum.

3. Stromness once had it’s own newspaper, The Stromness News, which was published in 1884. It only lasted for six months due to lack of news and a falling readership. However W.R Rendall the printers, continued for over 100 years, printing pamphlets, books and posters; including the amusing public notice above!

4. There were once 80 family-owned shops and businesses in Stromness. Amongst these were four bakeries and four butcher’s shops! One of the butcher’s shops was E. Flett’s, which is open to this day. The business was founded in 1876 by Adam Flett after he returned from working in Canada for the Hudson’s Bay Company. The firm was then taken on by his son and then his grandson Eric, who added the initial E to the name!

5. Famous names from Stromness include the poet George Mackay Brown; his evocative poem Hamnavoe paints a vibrant picture of the town from his childhood. His house sits opposite the Stromness museum. Sylvia Wishart was a renowned artist who was born in Stromness, worked at Gray’s School of Art and later moved to outertown. Robert Shaw, star of Jaws, spent part of his childhood in Stromness. His father was a doctor in the town and Robert first acted in a play in the Stromness Town Hall.

6. In 1957 a Swimming Club was set up in Stromness. At that time folk (133 juniors and 35 seniors) would learn to swim at Warbeth beach. There was swimming from piers and between Ness and Warbeth (a place known as the Tender Tables) beforehand. However, after ten years of fund raising, Stromness Swimming Pool was built and opened on the Tuesday of Shopping Week 1969. Clever thinking allowed the pool to be built cheaply on the site of the army garrison theatre; the pool used boilers from the Twatt aerodrome and excess cement from the Council yard. Stromness Swimming Pool was Orkney’s first indoor pool and the modernised version is a great place to visit today!

7. Stromness was a vibrant place during the Second World War. The Stromness Hotel was the headquarters of the Army, and there was a huge influx of military personnel. Suddenly residents of Stromness could see the latest films and there were drinking parlors (Stromness had been dry since 1920) and frequent dances! Many celebrities arrived to entertain the troops; these included George Formby and Flannigan and Alan. It must have caused quite a stir when Gracie Fields (pictured) appeared on the balcony of the Stromness Hotel to sing to the soldiers and civilians below!

8. After the excitement of the war years in Stromness, there was a period of post-war doldrums. This, and the desire to promote trade, made community-minded officials create Stromness Shopping Week, which started in 1949. This annual gala has run almost every year since and has delighted crowds with competitions, high-wire acts, magic shows, fancy-dress parades, candy floss and fairground rides. For the 50th celebration of Stromness Shopping Week, the Red Arrows put on an amazing aerial display!

9. In the past, burns flowed down the hillside of Stromness to the street below and this is where much of Stromness’ drinking water (and water for washing, powering mills and for illicit stills) came from. These days the burns flow under the street, but you can see burns still up Sutherland’s Close and the close on Graham Place behind the bookshop. Many Stromness place names betray evidence of burns; at Mayburn court (where George Mackay Brown stayed) there was once a distillery, from 1817 to 1928, which relied on the fresh waters of the Mayburn to make spirits!

10. Being a waterfront town with close ties to the sea, the Lifeboat is very important to Stromness. The town’s first lifeboat was named ‘Saltaire’, and it entered service in 1867. The first Stromness lifeboat shed can be seen at Ness, next to the Golf Course. tidal and weather conditions made this a difficult place to launch a lifeboat, and so it found a home closer to the centre of Stromness. the lifeboat, named ‘Violet, Dorothy and Kathleen’ is now moored in Stromness harbour. The third Lifeboat shed is a distinctive red building which can be seen on Dundas Street.

11. A fossil found at the West Shore of Stromness went on to influence scientific thought. Hugh Miller was a stone-mason, geologist and theologian from Cromarty, and he regularly contributed his finds to the Stromness Museum. At the West Shore he found the oldest vertebrate remains discovered in Orkney; which can be seen to this day. His 1850 book about it; ‘Footsteps of the Creator or the Asterolepis of Stromness’ went on to have an influence on Darwin’s ‘The Origin of Species’!

12. Fishing was always an important livelihood for the people of Stromness, but over the years this has evolved. The white fish industry has all but died out. Today in Stromness you will find fishermen catching brown crabs and lobsters to be processed and exported by the Orkney Fishermen’s Society, a co-operative group. Whelks are exported to Japan, Velvet and Green Crabs to Spain and scallops are hand picked by divers. Many ex-fishing boats now take holidaying divers (around 4000 a year) to the wrecks of Scapa Flow. Many other boats in the harbour now serve the renewables industry.

13. Stromness is famous for three food products which are distributed throughout the world. Stockan’s Oatcakes were started in 1969 after Jim Stockan retired from his family bakery and began making Oatcakes as a hobby. Oatcakes have proved to be such a success that five thousand boxes are now baked in a large factory in the north end of the town. The aroma that drifts through the Stromness from the factory is mouth-watering!

Delicious Orkney Fudge was created by Jim Robertson following the lifting of rationing after the Second World War. Initially made in the former Commercial Hotel, Orkney Fudge then moved to a premises on Cairston Road, known locally as the Fudge Factory. These days the recipe has been passed to Argos Bakery and it’s popularity has not diminished.

The Island Smokery is a newer business, formed in 2004, and they produce a range of smoked and flavoured cheddars using milk from Orkney cows. Combine this with an oatcake from Stockans for the best flavour!

14. Boat building was a busy industry in Stromness. There was once a boat yard at Ness, and another at Copland’s Dock, near the holms of Stromness. The walls of Copland’s Dockyard can be seen amongst the newer Copland’s Pier, which was opened in 2014 to serve the renewables industry. There are fewer wooden boat builders in Orkney these days. Ian Richardson worked in Stromness and specialised in clinker and carvel built boats. He made several Orkney Yoals and even a Viking Longship for a film company. Before retiring in 2018, he passed on his traditional boat building skills to Jeff Mackie.

15. Out at Billia Croo, on the shore at the foot of the Black Craig, on the outskirts of Stromness is a stone known as the ‘Naming Stone’. It’s a large area of vertical stone face, on which Stromnessians have inscribed their names over the years!

Some of the inscriptions go back to the 19th Century. Please take care around this area as there are slippery rocks and steep drops all around – the naming stone, though fascinating, is not a place to take children. 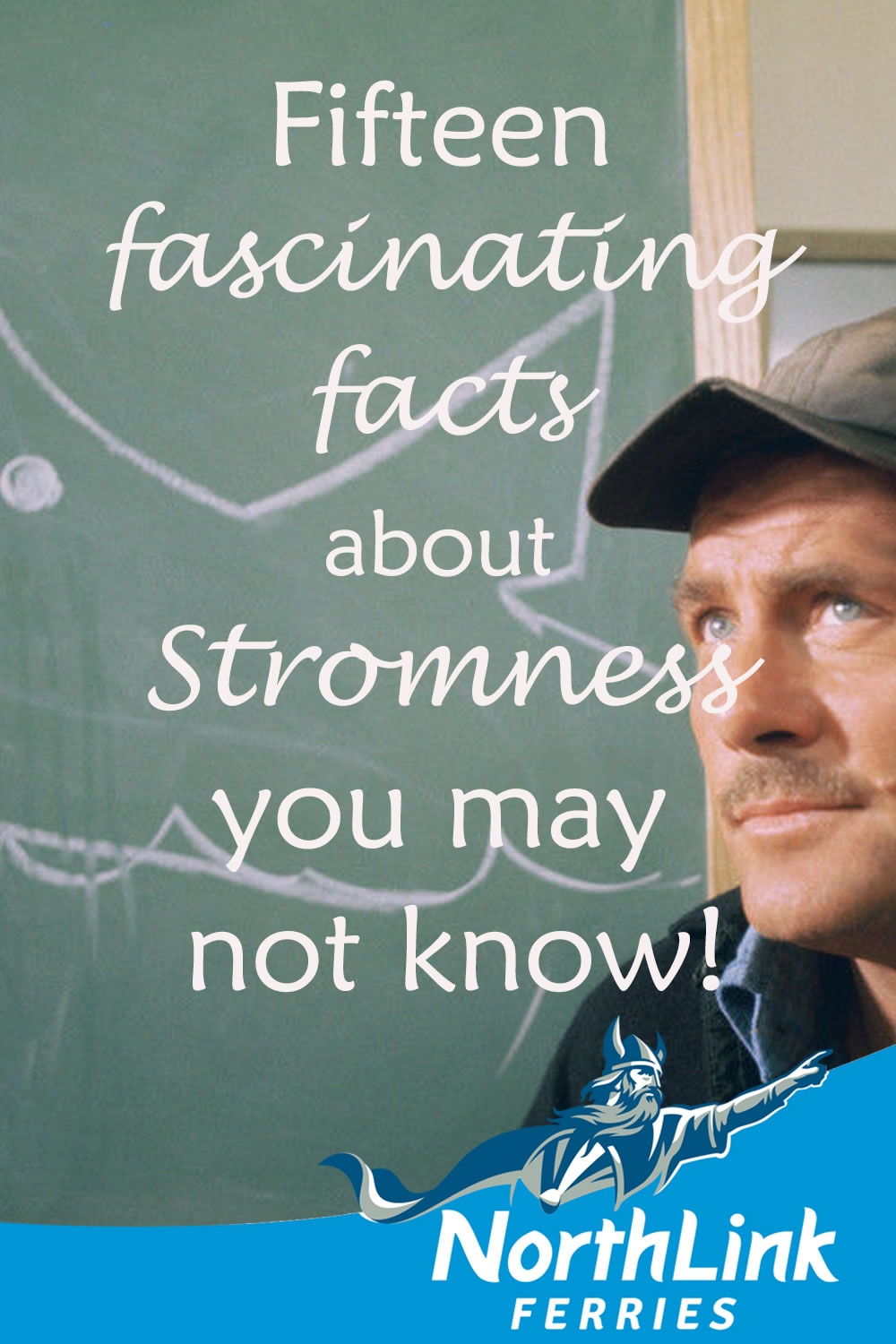