Orkney has a fascinating wartime history as the vast natural harbour of Scapa Flow was used as the Naval Base for the British Fleet.

The bell from the Royal Oak can be found in the St Magnus Cathedral in Kirkwall. HMS Royal Oak was a Revenge-class battleship which was sunk while laying at anchor in Scapa Flow on 13th October 1939 by an enemy torpedo.

In the past, British Naval Bases were located closer to old enemies such as France, Spain, and the Netherlands. However, in 1904, in response to the build up of the German High Seas Fleet, it was decided the entrances to the North Sea could be controlled from Scapa Flow. Scapa Flow also had the great benefit of being far from German airfields in both World War 1 and 2!

If you’d like to explore Orkney’s wartime history, there are many batteries, searchlight and gun emplacements and other relics of war left scattered through the islands!

Hoxa Battery in South Ronaldsay looks over the southern entrance to Scapa Flow, the Sound of Hoxa, from the east side.

Hoxa Battery searchlight emplacement – you’ll get a stunning view of Scapa Flow and the South Isles from here!

The Italian Chapel was built by Italian POWs during World War 2. It can be found on the island of Lamb Holm after the first barrier. Find out how it was built!

The Battery at Stanger Head on the island of Flotta. This overlooked the sound of Hoxa from the western side. To reach Flotta you must take a ferry from Houton.

Diving in Scapa Flow – when the Germans scuttled their captured ships in Scapa Flow at the end of the WW1, Orkney became a popular destination for divers! Here a diver visits the Geleitboot F2.

Lyness – During the WW2 HMS Proserpine was the main base for the naval fleet based at Scapa Flow and was located in Lyness. In 1940 over 12,000 military and civilian personnel lived here! There is a ferry from Houton on the Orkney Mainland to Lyness in Hoy.

The Scapa Flow Visitor Centre at Lyness offers a fascinating glimpse into Orkney’s wartime history with impressive artefacts and photographs. The museum is contained in a former pump house and is a must-see! It is only a short walk from the ferry.

The Arctic Convoy Memorial in Lyness pays tribute to the bravery of the men of the Arctic Convoy who carried supplies by sea to Russia. The stones represent the bows of a ship and the plaques are in English and Russian.

The bell from the Royal Oak can be found in the St Magnus Cathedral in Kirkwall. HMS Royal Oak was a Revenge-class battleship which was sunk while laying at anchor in Scapa Flow on 13th October 1939 by an enemy torpedo. 833 lives were lost.

The Houton Battery in Orphir is in the perfect position to look over the western entrance to Scapa Flow. It looks across to the island of Hoy over the Bring Deeps.

An isolated searchlight position on the shore at Houton Battery.

The Churchill Barriers were built to protect the British Fleet in Scapa Flow after the sinking of the HMS Royal Oak. They now link the south isles of Lamb Holm, Glimps Holm, Burray and South Ronaldsay to the Orkney Mainland.

Holm Battery looks across to the first Churchill Barrier. Before the barriers were built, this Battery protected the eastern entrance to Scapa Flow.

WW1 Blockship in East Weddel Sound (at the 3rd Barrier). During the First World War, Blockships were deliberately sunk in the smaller channels into Scapa Flow to prevent enemy attacks!

Rerwick Battery is a coastal battery located in Tankerness in the North East of Orkney.

The Ness Battery can be found on the west shore of Stromness next to the golf course and was a coastal defence battery in both wars. It was used by the Regular and Territorial Army for training until 2001 and in Spring 2012 was opened to visit by guided tour.

The west shore of Stromness can be seen from the Hamnavoe, and it is littered with gun and search emplacements. These were built to protect the western entrance to Scapa Flow and are among the easiest wartime relics to reach. 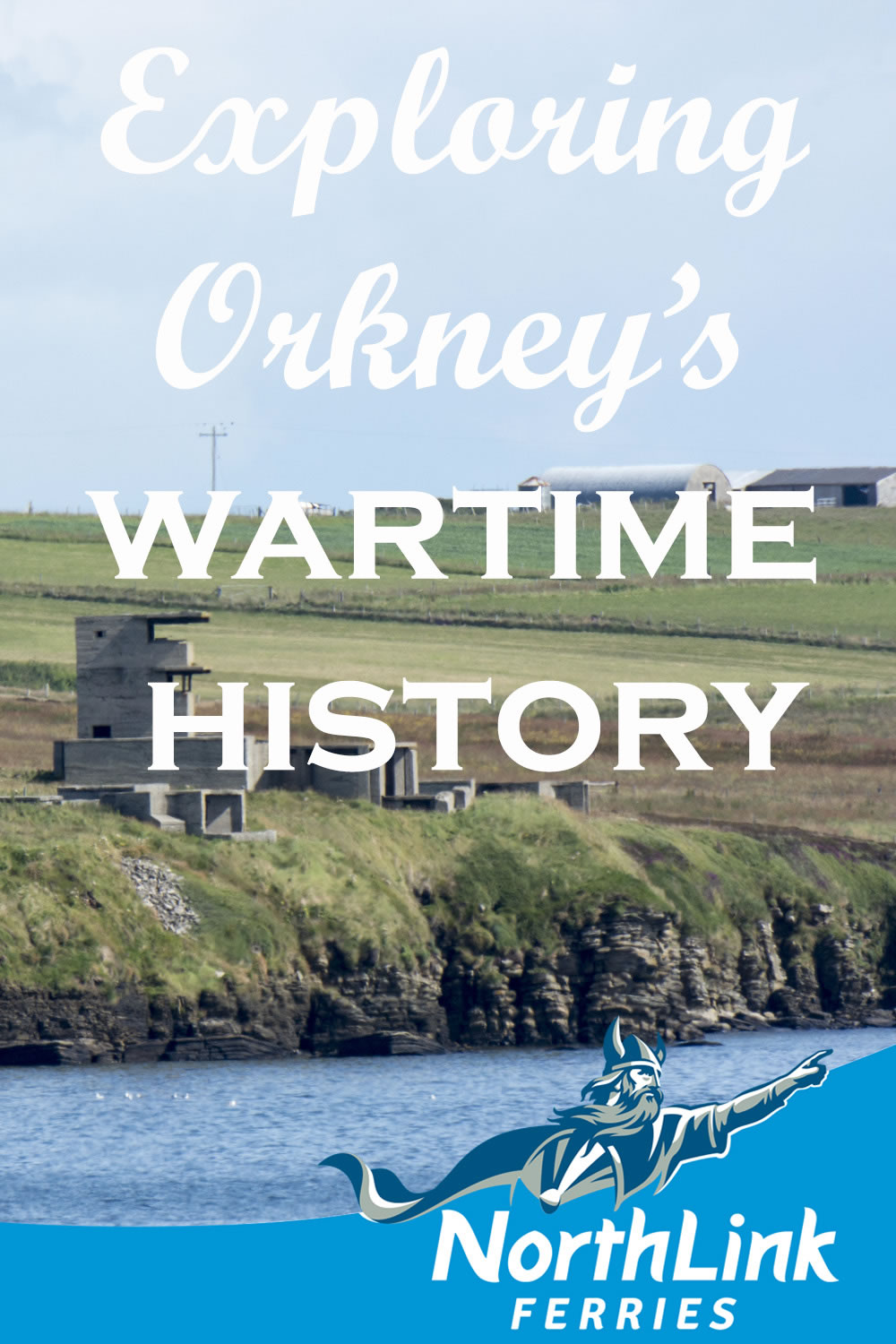