Fascinating facts about the Ring of Brodgar you may not know!

On a dark moor between the Loch of Harray and the Loch of Stenness, there is a vast circle of 36 standing stones. When the Ring of Brodgar was built 4,000 years ago there may have been over 60 stones and a huge amount of labour must have been required to build it.

Circles everywhere.
Everything that sets out must complete a journey.
What appears to us voyagers a tangle, random blunderings,
Is seen, angel-vantaged, as certain as the star wheel

An extract from Swans at Brodgar by George Mackay Brown

The reason why the Neolithic people erected this monument, however, remains a mystery. Read on to find out some fascinating facts about the Ring of Brodgar you may not know!

1. The Ring of Brodgar was not built by Orkney’s earliest people

When we look at the Neolithic village Skara Brae, or prehistoric monuments such as Brodgar, we often think that these were built by the first people to live in Orkney. This was not the case though. Fragments of carefully made flint tools found in Orkney fields and in the lowest levels of Orkney’s Neolithic sites indicate that a resourceful and skilled community of Mesolithic people lived in the islands almost 4,000 years before the Ring of Brodgar was built. Mesolithic people were able to construct boats, and perhaps arrived in Orkney around 6,000BC from Britain or Scandinavia.

2. The builders of the Ring of Brodgar had a good life

Whilst Mesolithic people were hunters and gatherers, the Neolithic people who came later domesticated animals, and gathered seeds for planting. Evidence in prehistoric houses at Skara Brae and the Knap of Howar show that they were fishermen as well as farmers, who made pots and spun yarn. Neolithic people must have had a good standard of living to be able to organise the community and have the energy to build the impressive tomb of Maeshowe and erect the Ring of Brodgar.

3. The Ring of Brodgar took a considerable amount of time to build.

The old Orcadian tale is that the standing stones were quarried at Vestrafiold in Quoyloo, Sandwick. Sure enough, tools from ancient stoneworkers, including hammerstones and flint, and remnants of quarried standing stones can be found here. The BBC programme ‘Britain’s Ancient Capital’ suggested that each standing stone was dragged by ropes the 8 miles to Brodgar. Slippery seaweed may have been placed underneath to make the task easier.

What is certain is that each group of people who undertook the challenge of moving a standing stone would have been very proud of ‘their’ stone, and perhaps, as some historians have suggested, the act of bringing together communities to build the Ring of Brodgar was more important than the final stone circle itself.

4. The stone circle at the Ring of Brodgar is almost four times bigger than the nearby Standing Stones of Stenness

The Ring of Brodgar was built sometime in between 2500BC and 2000BC and it is very large – 103.7m in diameter. The stones are laid out in a perfect circle and, though some are broken stumps, most stand between 2.1m and 4.7m high. This is a monument to be experienced from within, and the stones beg to be touched. The Ring of Brodgar is surrounded by a deep ditch carved out of sandstone bedrock and this may have once been filled with water. Perhaps this was to emphasise that the stone circle was a significant place. There were two causeways to cross into the circle itself.

The Standing Stones of Stenness is a much smaller stone circle, (though the stones themselves are taller) situated less than a mile away. It was built before Brodgar in 3100BC. However both are older than other stone circles in Britain (only the earliest phases of Stonehenge are as old). Perhaps the idea of digging ditches and erecting stones spread southwards from the islands in the north.

5. The whole area was a ceremonial centre for Neolithic people

When trying to understand the purpose of the Ring of Brodgar, the wider context of the area should be considered. In between the Standing Stones of Stenness and the Ring of Brodgar, a complex of Neolithic buildings too architecturally impressive to be houses were unearthed at the Ness of Brodgar in 2004. These buildings were in use between 3500 and 2300BC, and within them were beautifully crafted and valuable objects which strengthened the theory that the area was a centre for rituals and ceremonies.

Walls were also discovered during the Ness of Brodgar dig. These stretched across the width of the peninsula and would have controlled movement to the Ring of Brodgar. Perhaps the stone circle was a sacred place, deliberately partitioned off.

Nearby there is a small henge monument known as the Ring of Bookan, a prehistoric village at Barnhouse and the Neolithic tomb at Maeshowe which faces the setting midwinter sun. There are also a number of solitary standing stones nearby including the Watchstone and the Comet stone.

The area was clearly of great importance to these people, who were a united community, very much in tune with their environment and the cycles of the sun and moon.

6. The meaning of the Ring of Brodgar is lost to time.

For Neolithic farmers, the annual cycle of spring, summer, autumn, and winter would be well represented by Brodgar. The following George Mackay Brown poem highlights this well.

Circles everywhere.
Everything that sets out must complete a journey.
What appears to us voyagers a tangle, random blunderings,
Is seen, angel-vantaged, as certain as the star wheel
or the journey from a root that ends in the June rose.
The seed, the bequest, will quicken again under snow.

Circles compel us everywhere,
Sun and stone and bird-flight.

Ancient wisdom knew the law of circles,
Instructing the quarrymen and masons of Brodgar
In the purity and inevitability of stone-setting.

And the great white birds
Caught in a random circle of repose
Will rise again to the blood’s curve and thrust.

However, no one really knows why the standing stones were erected. There are many scattered around Orkney, which always seem to be in conspicuous positions. Perhaps they were territorial or astronomical markers?

7. The situation of the Ring of Brodgar may have been important too

The name given to the Ring of Brodgar, by those who built it, is now lost to time. ‘Brodgar’ comes from the Old Norse ‘Bridge Farm’ which refers to the sliver of land that joins the Brodgar and Stenness promontories. For the modern visitor, it is easy to see that the Ring of Brodgar is located in a special place. The stone circle feels as if it sits in the centre of Orkney, surrounded on all sides by hill, field, loch and sky. The variety of lighting conditions here is a photographer’s dream.

When the Ring of Brodgar was built, the area where the Loch of Stenness is now was wet and marshy. The sea broke through at the Brig O’Waithe to form the loch 1,000 years later.

However, whilst the stone circle’s location is significant, so too was the size. Could the Ring of Brodgar been a replacement for the older and smaller Standing Stones of Stenness? This author suspects that stone circles were used for important events, in the way that churches and community halls are used today.

8. Discoveries around the Ring of Brodgar offer fascinating clues

Though the centre of the Ring of Brodgar has never been excavated by archaeologists, discoveries nearby have offered insights into the stone circle. At the Ness of Brodgar, stones daubed with paint (pictured above) introduced the possibility that the Ring of Brodgar was once perhaps colourfully decorated.

Just outlying the Ring of Brodgar is a cairn known as the plumcake mound. When it was excavated, stone kists containing cremated remains from between 1745BC and 1566BC were found, which indicate that the Ring of Brodgar was still an important ceremonial place long after the Neolithic period.

There is an old tale that a group of giants gathered in the field between the lochs one evening when a fiddler set to playing a tune. The giants joined hands and danced in a circle. However, they did not notice how quickly night was passing, and when the sun rose, all the giants turned instantly to stone, as did the fiddler who stood outside the group. The giants remain there now as the Ring of Brodgar and the fiddler as the outlying Comet stone.

10. How to enjoy the Ring of Brodgar now

In 1906 the Ring of Brodgar was taken into state guardianship. Records from 1854 state that only 13 stones were standing, so in 1908, many of the fallen stones were reinserted into their original sockets. Whilst lifting the stones, one fallen stone was found to be inscribed with Norse runic writing. This appears to be a man’s name, ‘Bjorn’.

In June 1941, the Ring of Brodgar and its ditch were used to practice manoeuvres by Bren gun carriers of the 9th Battalion of Gordon Highlanders. No damage was reported, but in more recent times, lightning stuck two stones and shattered them.

In present times, the Ring of Brodgar is a fantastic place to visit in Orkney, particularly at sunrise or sunset. It is still an important place where people gather for weddings and midsummer celebrations and in 1999, Skara Brae, Maeshowe, the Standing Stones of Stenness and the Ring of Brodgar, were collectively designated a World Heritage Site known as the Heart of Neolithic Orkney. It is important that visitors follow the signposted path, as heavy rainfall and increased visitor numbers in recent years has damaged the track around the stone circle.

If you have time to spare, we recommend a walk through Brodgar to the edge of the Loch of Stenness to view curlew, skylark, redshank, hares, and the occasional otter!

Poem reproduced by permission of the Estate of George Mackay Brown. 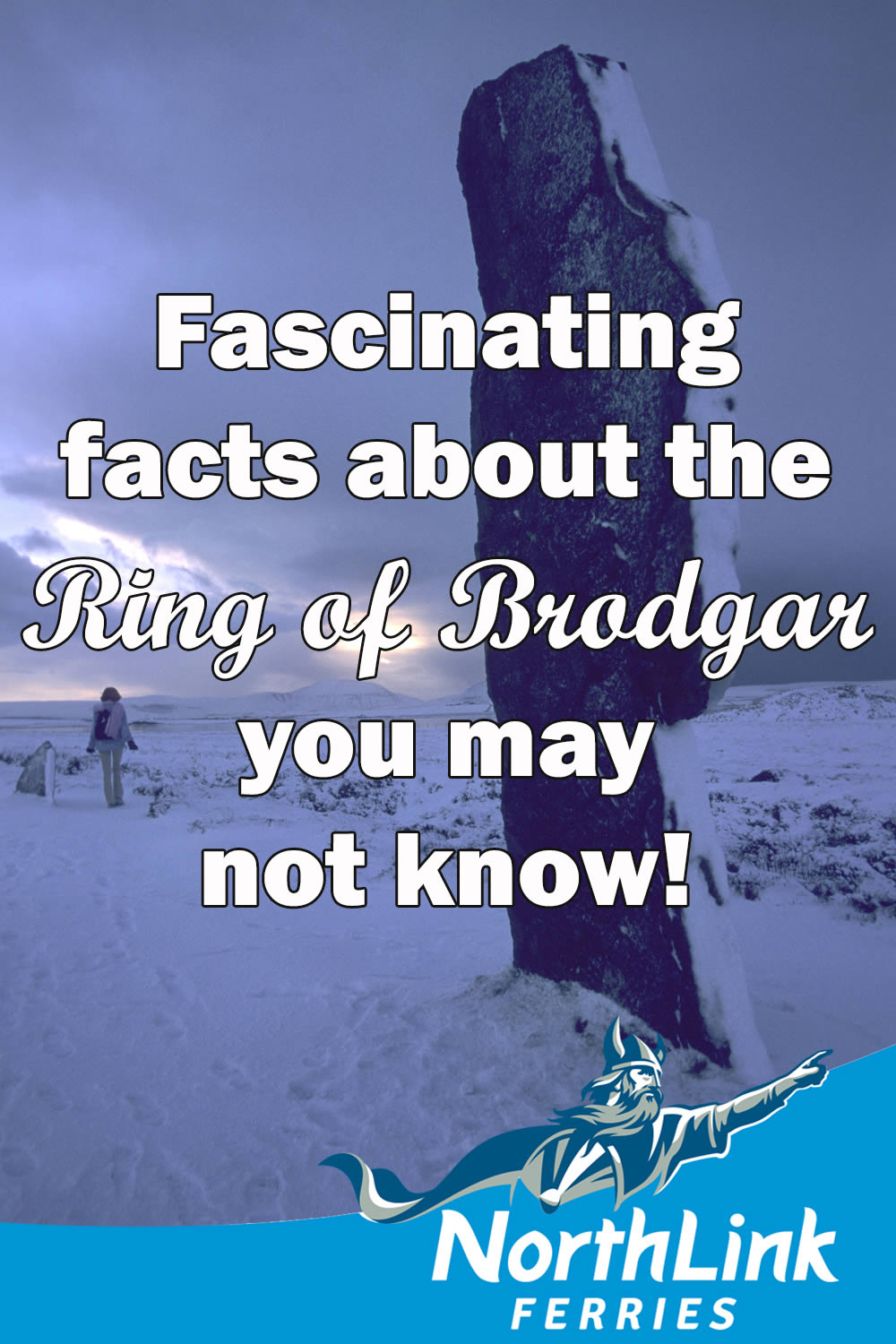