A walk from Yesnaby to Skaill

A very fine walk in Orkney is from the Yesnaby cliffs to the Bay of Skaill, hiking along the cliffs of the West Mainland.

The fossilised remains of Stromatolites are blue-green algae that once grew here. These primitive plants provide the most ancient records of life on Earth, and are thought to have created the oxygen-rich atmosphere of the planet by fixing large amounts of Carbon dioxide.

Most visitors to the impressive cliffs at Yesnaby explore the immediate area, and enjoy the stunning views there, but we think there is much to see if you take the less beaten path and walk northwards.

We’ll talk about Yesnaby first before we embark on our walk. Yesnaby is located 6 miles from Stromness and it is a stretch of amazing cliffs, seastacks, rocky beaches and promontories carved out of Old Red Sandstone rocks which were part of the seabed 400 million years ago. It is a beautiful place to visit on a sunny day, a romantic place to watch the sun set over the ocean, and a place to admire the power of the sea on a stormy day when waves smash into the cliffs and spray over the top.

The warm coloured rocky cliffs here are quite barren, but there are seapinks and rare wildflowers to be found, and ample room to park amongst the wartime buildings (Yesnaby was the base for an anti-aircraft battery in WW2). For visitors, we’d recommend a walk south to the whale-shaped premonitory called the Brough of Bigging for fantastic views (including the Old Man of Hoy in the distance), continuing further on to a 30m high sea stack with two legs called Yesnaby Castle, and nearby, can you also spot the almost-seastack with a thin rocky attachment to the surrounding cliff?

As you embark on the walk from Yesnaby to Skaill, you’ll come upon the most dramatic part first. After ascending a rocky hill and descending you’ll need to walk inland a little to the Bay of Borwick. There’s a stile to cross, duckboards in areas. a small rocky beach here and a mini sea stack, about 25ft high. After the beach there’s another climb up a slope to continue along the cliffs.

At the top of the slope you’ll be rewarded by meeting the Broch of Borwick on the cliff edge. The landward facing entrance and wall are all intact, standing to about 8 1/2 ft, however, coastal erosion has made the wall on the seaward facing side collapse. Though the Broch of Borwick once sat away from the cliff edge, coastal erosion has placed it in a very dramatic and precarious position, perched high on an eroding headland. The only safe way into the broch is by crawling in through the main entrance and you’ll find the interior is a mass of tumbled debris. However, we challenge you not to fall in love with this broch, hidden in a dramatic setting!

The Broch of Borwick was probably used for over 1,000 years, and was abandoned between 500AD and 600AD. Though not as grand as the brochs at Midhowe or Gurness, it is certain that Borwick was the dwelling of a powerful individual or family. Middle Iron Age pottery was found at Borwick and was taken to Tankerness House Museum. Little remains of the out houses that once surrounded the Broch.

If you continue on your journey northwards along the cliffs you’ll find the main reason for many to visit this part of Orkney – strange rock formations which are the fossilised remains of Stromatolites. As mentioned before, the rock here was once seabed, from a time 400 million years ago when a lake covered Orkney, and you’ll often spot fossilised sand ripples in the rocks during your walk. Stromatolites are blue-green algae that grew in the lake. These primitive plants provide the most ancient records of life on Earth, and are thought to have created the oxygen-rich atmosphere of the planet by fixing large amounts of Carbon dioxide. These fossils break apart to resemble Horse’s Teeth – this is what they are known as locally.

It’s quite amazing to think that in Orkney you can see the fossils of plants that first helped to create the atmosphere needed for life on Earth! Please note that it is illegal to remove these fossils, so please only go home with photos.

Continuing on your journey you’ll need to cross another stile before encountering a deep ravine called Ramna Geo which cuts inland and leaves a thin sliver of land on the seaward side, known as the Ness of Ramna Geo. In the recent past, many fish fossils were found in a layer of rock here, known as the Sandwick Fish bed – you can see the best of these in the Orkney Fossil and Heritage Centre in Burray.

That said, we would strongly advise against cutting across the fields and missing the last stretch of cliffs. Follow the curve of the coastline, and on the south side of the Bay of Skaill you’ll come to the Hole o’Row. This is a cave worn tight through the headland and on a wild day the sea explodes through the hole itself!

As you descend from the headland to the lovely beach below it’s worth noting that the whole parish is named after the Bay of Skaill, which is really the only beach there. The Vikings had very descriptive ways of naming places in Orkney and Shetland, and the parish name, Sandwick, means ‘sandy bay’ in Old Norse.

The Bay of Skaill is a truly lovely wide curve of a beach which is half sand and half small sea-smoothed pebbles. Ironically, the soft sand here made the walk along the beach the hardest part of the journey from Yesnaby for us. There’s a car park and toilets also above the shore at the Bay of Skaill, and as you arrive, you’ll spot three landmarks – Skara Brae, Skaill House and St Peter’s Kirk.

The Neolithic village of Skara Brae is the most famous attraction at Skaill. It was discovered in the winter of 1850 when a great storm battered Orkney which ripped the earth and grass from a large mound known locally as Skerrabra. A perfectly preserved village of eight houses was discovered, and when people stayed in it 5,000 years ago, Skara Brae became embedded in its own rubbish (or midden). It is thought that this provided insulation, but for us, the midden offered clues into how the dwellers lived every day. These people were cattle and sheep farmers who also ate fish and grew barley.

As the Bay of Skaill has advanced inland over the years it is certain that other houses which were lost to the sea before Skara Brae was found. Recent discoveries have pointed towards the possibility of there being more Neolithic settlements nearby. On the north side of the bay there is an Iron Age site known as the Knowe of Verron, and close to the kirk, prehistoric jewellery, including silver brooches, necklets, armlets and coins was found in 1858 and are known as the Skaill Hoard.

If you buy a ticket for Skara Brae you’ll also get a ticket for Skaill House. This mansion was built in 1620 by Bishop George Graham and contains 400 years of history. It was the home of the 7th Laird, William Graham Watt, who discovered Skara Brae. Visitors will find artefacts related to this, as well as a Norse calendar stick, a dinner service used by the explorer Captain James Cook on his 3rd and final voyage and paintings by the acclaimed Orkney artist Stanley Cursiter. In 1983 Skaill House was visited by the Queen Mother – you’ll see her signature in the guest book.

There is self-catering accommodation and a falconry at Skaill House. Interestingly, Skaill House is also haunted by a ghost known as Ubby. Many odd events occur within Skaill House, such as objects being moved without explanation or the sound of footsteps in an empty passageway, but custodians over the years have remarked: “Ubby doesn’t mean any harm. He just likes us to know he’s there.”

St Peter’s Kirk stands on the northern edge of the Bay of Skaill and it is a recently restored and lovely example of a simple white-washed church. It was originally built in 1836 on the foundations of its predecessor, but as it was also built partly on sand, the minister soon recorded cracks in the wall. By 1988 St Peter’s Kirk was recommended to be demolished but in 2003 it was renovated by the Scottish Redundant Churches Trust and these problems were fixed. St Peter’s Kirk is unique in having a pulpit in the middle of the south wall so the congregation sweeps around it in seating on all three sides.

Walking from Yesnaby to Skaill is a rewarding activity throughout the year. Between May and July you’re likely to spot the rare flower Primula Scotica and in autumn and winter you’ll see some impressive waves rolling into the Bay of Skaill from the Atlantic. We’d recommend that you undertake the walk with two car drivers so that a vehicle can be left at the start and end point. However most importantly, please be careful as you walk next to cliffs and wrap up warm as you go! 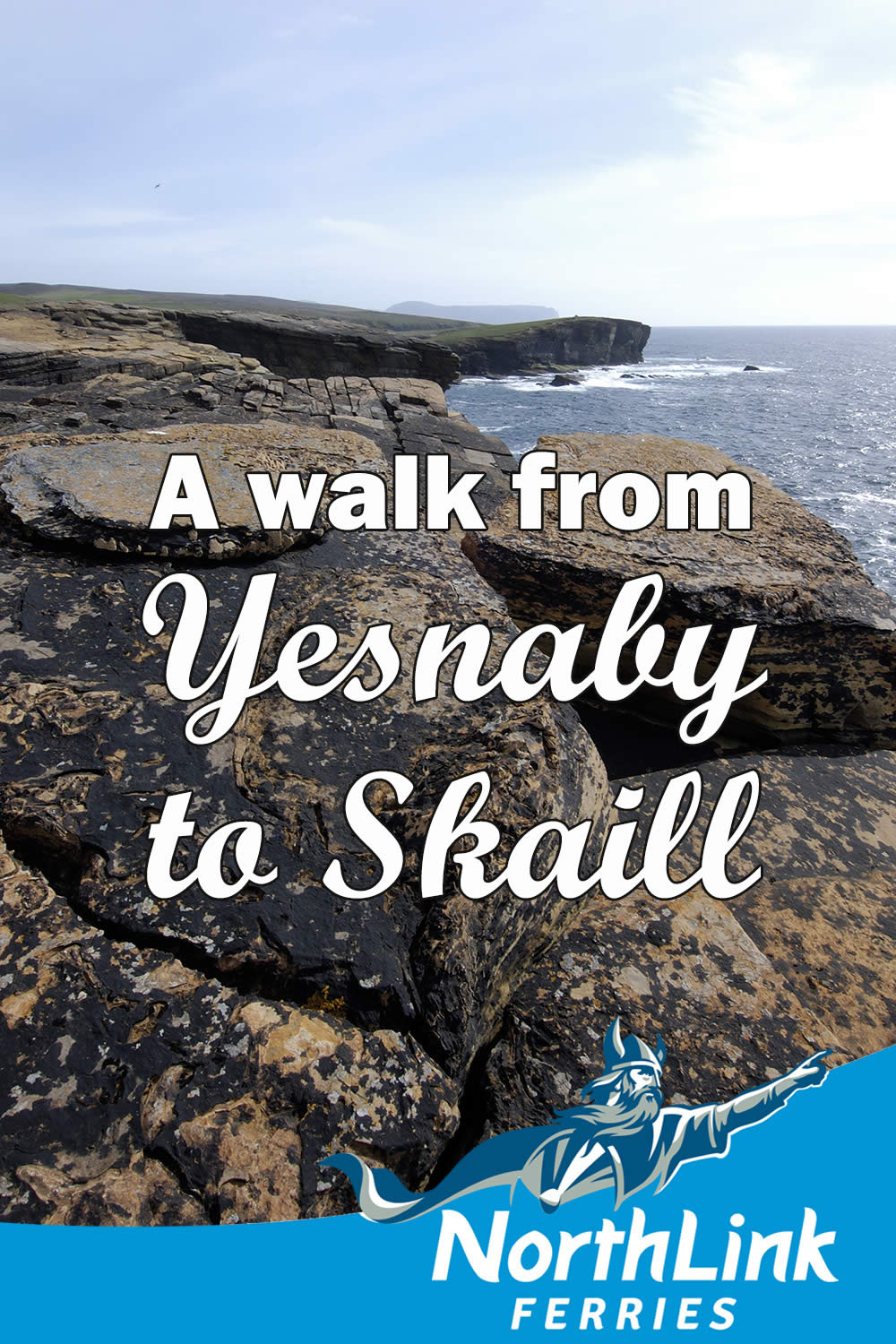