My fifteen favourite things in the Shetland Museum

The cultural history of Shetland and Orkney is fascinating, and in a previous blog post, we shared our fifteen favourite things in the Orkney Museum. Today we’re delving into the past to uncover our favourite artefacts at the Shetland Museum.

One of the most incredible finds from Upper Scalloway is a small gaming piece, no bigger than your little finger, carefully carved to depict a human figure. This is believed to be an Iron Age gaming piece, and we can only guess at what the game might have looked like.

Shetland Museum and Archives is a purpose-built facility opened by Her Majesty the Queen of Norway and Their Royal Highnesses, the Duke and Duchess of Rothesay, in 2007. Situated in the historic Hay’s Dock area of Lerwick, the museum is a beautiful building overlooking Lerwick Harbour.

Top tip: Be sure to walk around the dock outside as you can often see otters in the area.

We’ve compiled a list of our 15 favourite things on display in the Shetland Museum, and we would urge visitors to spend some time here discovering more about the fascinating history of the islands.

Admission is free and for opening hours, check the Shetland Museum and Archives website.

Shetland’s human history dates back over 5,000 years to the first farmers who bravely turned over the soil and settled for the first time. All that we know about the Neolithic people comes from the things they left behind. None of the finds is more enigmatic than the highly-polished, wafer-thin felsite knives produced in significant numbers in the North Mainland around North Roe and Uyea. They are unlike anything else found in Scotland. Thought to have been ritualistic, caches of these knives, like the hoard in the photograph, are often found buried in the peat moor and are thought to have been ceremonial or votive offerings.

Shetland’s Late Iron Age – or Pictish – population remains a mystery. The name ‘Pict’ means the ‘Painted People’, and they are best-known for the incredible symbol stones found across Scotland. Painted pebbles are generally associated with broch sites and have been found in Orkney and Caithness, but the greatest number (to date) come from Shetland. They are small, rounded beach pebbles made of quartzite that are painted with a simple brown design often made up of simple dots, crosses and ‘swirls’. These may have been used for gaming, and it’s believed that they were painted with heated peat tar.

Upper Scalloway is an archaeological site that has been in the news recently as it was thought to be the site of a significant Viking settlement. The area has long been associated with archaeology and is the site of a former broch. One of the most incredible finds is a small gaming piece, no bigger than your little finger, carefully carved to depict a human figure. The cone-shaped figure is hooded, with astonishing detail forming the face – not dissimilar to a pawn on a chessboard. This is believed to be an Iron Age gaming piece, and we can only guess at what the game might have looked like.

The reconstructed loom weights form, a striking display within the Viking cases – not only does it show how the Viking and Norse settlers processed textiles, but it also shows the increase in the use of steatite – better known as soapstone or kleber in Shetland. In preparation for weaving, rows of loom weights were tied to bundles of warp threads to keep the necessary tension. These stone weights are found throughout Viking and Norse sites in Shetland and are made from soapstone which is incredibly easy to carve and shape.

Shetland’s oldest surviving document, dating to 1299, comes from the island of Papa Stour. A replica of this significant document is on display within the museum and offers a tantalising glimpse into political life in Shetland at the time. This incredible 13th-century scroll regards a local woman who is accusing the governor of Shetland of cheating Duke Hȧkon Magnusson, the heir to the Norwegian throne. The original is held in Denmark – Shetland was part of the Danish kingdom until 1469.

In the 1950s, whilst cutting peat at Gunnister in the North Mainland, the body of a man was discovered in the moor, his clothing almost perfectly preserved in the acidic peat bog. The body can be dated back to around 1700 based on the coins he carried in his knitted purse. The clothing offers us an unrivalled glimpse of what early 18th-century fashion looked like at the time, and the purse that he had is the first physical evidence of Fair Isle knitting in Shetland.

On display in the reconstructed Shetland crofthouse display, you’ll find a little pig known as a Shetland ‘grice’ – grice being the dialect name for a pig. The Shetland grice was a distinct subspecies noted for its ill-temperament, bristled hairs and distinctive tusks. This creature that became extinct at the end of the 19th century was said to be an obnoxious, stubborn and aggressive beast that nobody was sad to see the back of. Tusks from this distinctive beast often appear in archaeological assemblages, and a grice’s skull was found recently in a midden in Nesting.

The unusual straw suit with a pointed hat and trailing red ribbons is a skekler’s suit. Skekling is a uniquely Shetland tradition, usually carried out around Yule (Christmas and New Year) or Hallowmas. This was a time of merriment, where young men would don straw suits and hats and set off throughout the neighbourhood guizing. This act was known as skekling, and skeklers would do the rounds, going from house to house, faces covered, collecting small tokens of food. Hallowmas, or The Feast of All Saints, gives us the roots of the Halloween that we know today.

The Northern Isles have long been deeply superstitious places, and often, wise women would use simple medicinal charmstones like this one to cure ailing humans or animals. Many stories from folklore speak about women who could cure cows or sickly infants. Often, the reason for a non-milking cow was attributed to witchcraft, and a wise woman – often branded a witch herself – would be brought in to cure the beast.

Shetland has a rich fishing history, and no boat quite tells the story of Shetland’s fishing heritage as well as the sixern. A sixern, or sixareen, is a six-oared, open boat most commonly associated with Shetland’s haaf, or deep-sea fishing. This fishery, carried out in the 18th and 19th centuries from these open boats, travelling up to 30 miles offshore, was a dangerous job that cost many men their lives. Fishing disasters such as the Delting Disaster (1900) and the Gloup Disaster (1881) are testament to this. The Industry is the last remaining original sixern in Shetland and was laterally used for flitting peats in the West Mainland.

Shetland has a surprising link with the lucrative Dutch East Indies trade of the 17th and 18th centuries. No less than 20 East Indies bound or returning ships were lost in and around Shetland waters, including the Dutch-owned Kennermerland wrecked off Skerries in 1664. Shetland Museum’s displays showcase a glittering array of incredible finds uncovered from the seabed 400 years after the ship was lost. These offer a tantalising glimpse into life on board a Dutch East Indiaman.

Crime and punishment is always a topic of morbid curiosity – particularly the methods of punishment used in the past, which, more often than not, involved the ritual humiliation of the accused. Lerwick’s town ‘stocks’ are on display within the museum. These were originally used outside Lerwick’s Tollbooth building and were employed to punish criminals. Prisoners would have their feet placed in stocks for a specified time, allowing townspeople ample opportunity to go and sneer or spit at them.

Shetlanders have always travelled great distances to work at sea and, like most seafarers, brought back souvenirs from their journeys. This incredible kayak, made from animal skin, would have been brought back as a souvenir from Shetlanders at the whaling. Other items include painted scrimshaw and whale eardrums!

This skirt clip is a very non-descript item that could easily be overlooked by the more ‘iconic’ pieces within the Victorian section. The skirt clip, used to keep the hem of a skirt and petticoat from trailing on the ground, seems somewhat out of place in a museum that bases so much of its story on subsistence living and the ordinary, everyday people that lived and worked in this fishing and crofting community. Yet, as with other rural areas of the Highlands and Islands, Shetland also had an ‘elite’ class. Similarly, many young women from Shetland moved to the mainland to take up jobs in service as domestic servants and would have been well-acquainted with items like this.

The displays at the museum are bright, informative and bursting with inspiration for any knitters looking for ideas.

We’d love to hear what your favourite objects are; remember to tag @NorthlinkFerries when you visit to let us know!

By Laurie Goodlad
Born and raised in Shetland, Laurie loves the unique history and culture there so much that she started her own tour company offering visitors the chance to see the isles through the eyes of an islander. Find out more at www.shetlandwithlaurie.com
Header image: Shetland Museum and Archives in Lerwick photo © Copyright Charles Tait 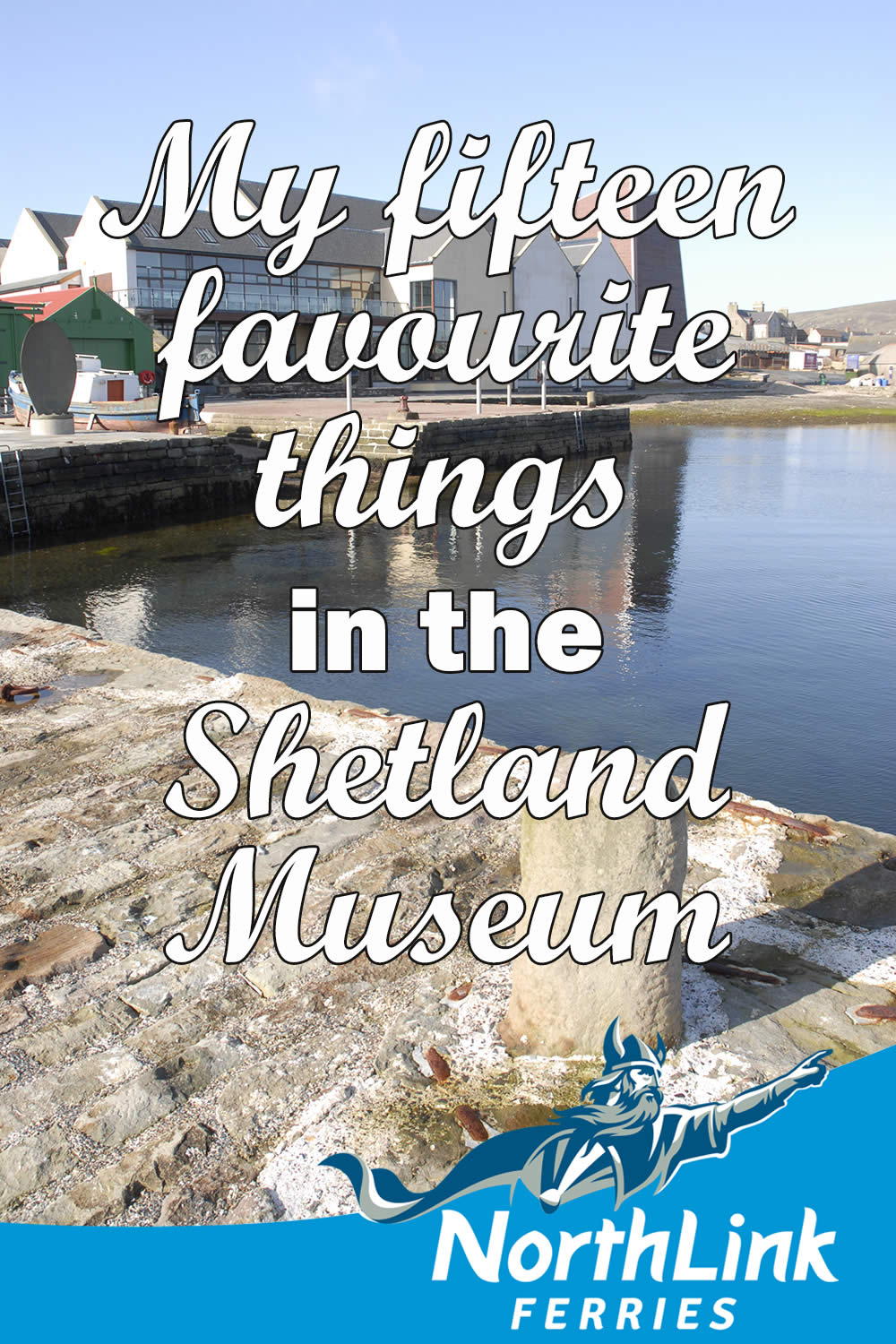