If you’re looking for a beautiful place to explore that’s off the beaten track and has a unique atmosphere, why not consider a visit to Lunna Ness?

The landscape of Lunna Ness is lumpy and glaciated, with single track roads, hill lochs, and exposed rocks associated with the trows (or trolls) of Shetland folklore. This eerie atmosphere is quite common in the wild areas of Shetland, and we hope this doesn’t put visitors off, but rather encourages them to go and experience it for themselves!

This secluded part of Shetland is a peninsula, a long finger pointing out north-east from the Shetland Mainland, under Yell on the map. Lunna’s sheltered coast is breath-taking and gave the area its name, from the Old Norse ‘hlunnr’ meaning a roller to help beach boats.

The area that contains Lunna Ness is called Lunnasting. To reach it, visitors would need to travel 16 miles northwards from Lerwick, along the A970 road (though there is a coastal road through Nesting also worth taking), and just before Voe, turn east onto the B9071 road which skirts the Loch of Voe, signposted to Laxo and Vidlin.

Laxo is a little crofting township, and in good weather, the ferry to Whalsay sails from here. At the head of Laxo Voe there is an ayre and a wide area of salt flats. Laxo Burn, fed by water from hill lochs, tumbles in here.

Close to the burn there’s a collapsed Neolithic cairn known as the Knowe of Brulland. The area is very photogenic and for keen fishermen, perfect for catching sea trout. Laxo Voe comes from the Old Norse ‘laxavagr’ which means salmon bay.

Driving on towards Vidlin, there is a sign for The Cabin Museum, which sits just off the road. Though closed in 2020 and 2021, we visited on a previous year, our curiosity aroused by the name. We found a brilliant museum started in 1978 by one man, and now run by his family, which is filled to the brim with wartime memorabilia.

Andy Robertson had served during WW2 in the Royal Navy. His interest in militaria led to a collection of medals which soon outgrew the confines of his house and then his shed (the first ‘cabin’) into the large building it presently occupies.

We were most taken by the Norwegian flag from a time in WW2 when the country was occupied. We also loved the war uniforms on display, the vintage motorcycles, and the picture of Shetlander James (Jimmy) Leisk on Sword Beach during D-Day.

There are very impressive exhibits relating to Shetland knitwear and fishing, but for those interested in wartime history The Cabin Museum will be open again soon and is a must-visit. Other places in Lunnasting also have a wartime significance – more on that later.

On the hill north of the Cabin Museum, a large stone bearing an ogham description was found in the peat in 1876. The Lunnasting stone is thought to date from the 8th or 9th century and is on display in the National Museum of Scotland.

The next stop on the road is a lovely little town along the edges of the head of Vidlin Voe. As visitors approach Vidlin they will encounter a General Merchant and Vidlin Hall first (which has a playground ideal for any children in your company). Following the road downhill, visitors will arrive at a marina, Lunnasting Primary School, and the ferry terminal for the Out Skerries, and for Whalsay when the sea conditions are too poor to sail from Laxo.

There is also an ayre here (a spit or tombolo formed of shingle) with Vidlin Voe on one side and Vidlin Loch on the other. The road crosses it and disperses to remote and peaty parts of Shetland. The ayre gave Vidlin its name, from the Old Norse ‘vadill’ meaning shallow or ford.

Back up at Vidlin Hall there’s a signposted road to Lunna. Follow this road to embark down the 6-mile-long peninsula of Lunna Ness.

We’ll stop for a minute to mention the eerie trowie atmosphere of Lunna Ness. The landscape here is lumpy and glaciated, with single track roads, hill lochs, and exposed rocks associated with the trows (or trolls) of Shetland folklore. Combined, this means that sometimes you can’t see what’s around the next bend in the road. Dotted here and there are crofts and the ruins of crofts. 19th century clearances have left Lunna Ness feeling oddly desolate and remote. This eerie atmosphere is quite common in the wild areas of Shetland, and we hope this doesn’t put visitors off, but rather encourages them to go and experience it for themselves!

At one green stop in the journey, where the land thins to 1/3 mile wide, you’ll encounter Lunna Kirk, also known as St Margaret’s Kirk, tucked away in the landscape.

Lunna Kirk was built in 1753 on the site of an earlier chapel, and some of the old walls merged into the ‘newer’ building. It is the oldest building in Shetland still in use for Christian worship.

Lunna Kirk has a peephole in the wall which was historically used by lepers so that they could hear and see the sermon without coming into contact with the congregation. Unusually, the upper floor is accessed by a stair on the exterior of the building.

Below Lunna Kirk on the shore of East Lunna Voe there is an old fishing booth and artificial beach where fish was laid out to dry.

The rocky shores around Lunnasting are ideal for spotting otters. The area has countless streams where they can wash the salt from their fur and soft peat banks ideal for building holts. There are so many otters here that Lunna Ness is a Site of Special Scientific Interest. We’d recommend staying quiet and still to best see them, and to glimpse seals too!

On the opposite shore there is a pretty little harbour with an active jetty, a storehouse, lime burning kiln and a much older stone pier. In the past, vessels sailing to Lerwick from the North Isles would often shelter here in the natural harbour of West Lunna Voe.

On the hill above Lunna Kirk stands Lunna House, a mansion with a fascinating history. It stands on the site of an Iron Age building, which later became a Viking longhouse and then a medieval Haa. Lunna House was built in 1660 by Robert Hunter, the first Lord Chamberlain of Shetland.

In 1910 the Bruce family bought Lunna House from the Hunters and used it as a summer residence. However in 1940 it was requisitioned by a secret section of the War Department as a training base for spies and saboteurs. It was here, in Lunna House, that the wartime ‘Shetland Bus’ operation began.

Brave sailors in converted fishing boats sailed in darkness from the sheltered harbour at Lunna Ness to Nazi-occupied Norway for raids and clandestine visits, helping refugees escape and delivering supplies for the resistance, including radios, ammunition, and explosives. Some of the crew members who lost their lives during the Shetland Bus operation are buried in the graveyard at Lunna Kirk.

The Shetland Bus moved its operation to Scalloway, where it was easier to repair vessels, in 1942. Lunna House continued to be used as a training base (for testing one-man submarines). After the war, the building fell into disrepair but was renovated in the 1960s and Lunna House operates as a Bed and Breakfast today.

Driving past Lunna House the road eventually drifts to the western coast, looking out to Mossbank, Firth, Yell, and smaller islands in between. The sheltered waters around Lunna Ness are busy with fish-farms. At Hamnavoe an eyelash of an ayre curls from the land into the voe.

Feeling adventurous enough for a hill climb? A walk to take in the Stanes of Stofast is highly recommended. On the road, visitors will notice a signpost for the stones next to a cattle grid and by a layby (around 2 miles from Lunna House). Unfortunately, the stones are on the opposite coast from the road, so visitors need to park in the layby, climb to the top of the hill, avoiding boggy ground, and cross for 2 miles to where the stones are, between Fugla Water and the Loch of Stofast. On our visit we renamed the landmark the Stones of Slimfast!

It is hard to describe how impressive the stones are. This was once a 2,000-tonne boulder, and 10,000 years ago it was transported a short distance by glacial ice and dumped here. In the years since, frost has split the house-sized boulder in two – and the Stanes of Stofast are quite something to see. If you feel the urge to climb them, please be careful.

For those feeling extra intrepid, the rocky island of Lunna Holm at the tip of the peninsula is brilliant for otter spotting. However, the road runs out 1 and a half miles before the peninsula does, so a hike across rough moorland is required to get there. We opted instead to head back to Lerwick after the Stones of Stofast (with a detour first to the fish and chip shop at Brae).

We were delighted to have found such a unique and atmospheric corner of Shetland, and hope you enjoy exploring Lunna Ness too. 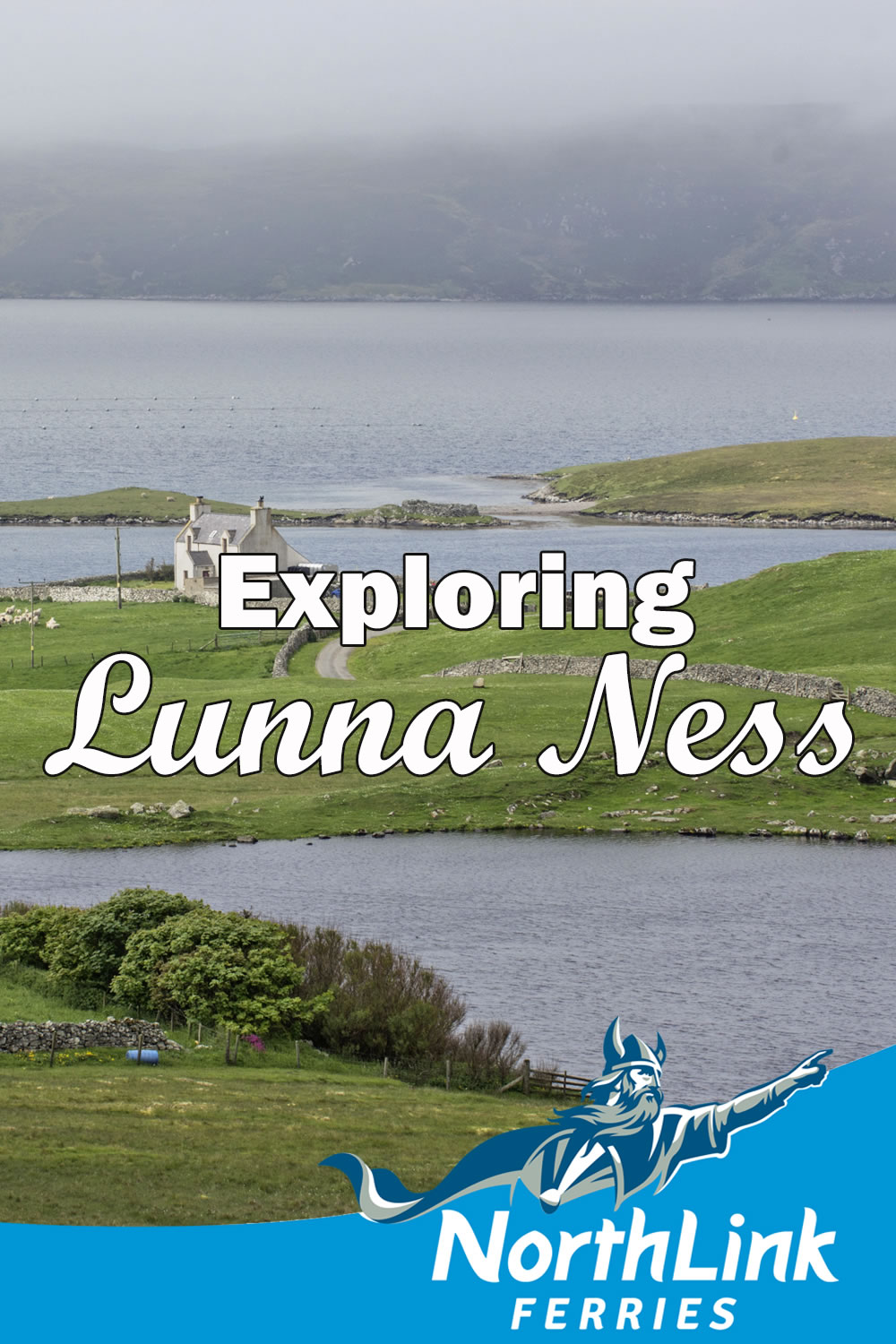