If you are interested in history, heritage and archaeology, Orkney is one of the most essential places in Scotland to visit. With few trees across the islands, Orkney buildings were always stone built and have survived for thousands of years. The Knap of Howar on Papa Westray may be the oldest house in northern Europe – it was occupied in 3700 BC – almost 6000 years ago! Orkney has an average of three archaeological sites per square mile!

Within one of St Magnus Cathedral’s pillars, bones were found, and amongst these a split skull. St Magnus was killed by an axe blow to the head.

We’ve compiled a list of twelve essential historical places to visit across the Orkney islands.

This amazing Stone Age village by the Bay of Skaill was buried intact and preserved in a sand dune for thousands of years. Uncovered in 1850, Skara Brae now offers us a glimpse into the homes of Islanders who stayed here over 5000 years ago. Skara Brae even shows us what their beds and their furniture looked like!

Fascinating thought: Can you imagine living in such close proximity with 50 other people? In Neolithic times, communal living was the norm. In later times there was a move to individual farmsteads.

The Ring of Brodgar and the Standing Stones of Stenness

Located between the loch of Stenness and the loch of Harray, these mysterious standing stones are an evocative enigma. Erecting standing stones, which were quarried miles away, is an amazing human achievement. Surrounded by a lovely landscape – it is thought that; like churches today – the monuments at the Ring of Brodgar and the Standing Stones of Stenness served different roles. Between them lies the Ness of Brodgar; ceremonial buildings which are excavated every summer.

Fascinating thought: The BBC TV programme ‘Britain’s Ancient Capital’ demonstrated how a traditional Orcadian method – placing seaweed under massive slabs of stone and then pulling them with ropes – was one of the most effective ways of moving giant stones.

The chambered cairn of Maeshowe is a short distance from the Standing Stones of Stenness and comes from the same period – it was used as a burial place around 2700bc. Maeshowe was built to incorporate four standing stones and was constructed so that during the midwinter solstice, the light of the setting sun shines down the internal chamber and hits the back wall. Sometime in the 12th century Maeshowe was broken into by Vikings, who left the best collection of runes in Western Europe carved into its walls.

We’d highly recommend a wander through the winding streets of Stromness – this lovely sea-salted town has a fascinating maritime history. At the south end of the town, situated on the waterfront, is the Stromness Museum – and it’s a gem of a building – packed with history about whalers, artefacts from Scapa Flow during the First and Second Wold War, stories about arctic explorers, sea chests, ship models, sea creatures and more!

Fascinating thought: During times of trouble in the English Channel between the England and France, the sea passage between Orkney and Caithness has been the only safe route for sailors to take their ships around Britain – this made the sheltered port of Stromness an important port of call.

The Orkney Museum is located opposite the St Magnus Cathedral in Kirkwall. It’s a labyrinthine building which was once the home of the Baikie family. It’s also a must-visit if you’ve visited any of Orkney’s historic sites – as many of Orkney’s most precious treasures reside safely here! There’s also a brilliant Ba’ exhibition – which documents the traditional game which takes place outside the Museum’s doors every Christmas and New Year.

Fascinating thought: Keep your eyes out for the goods excavated from a Viking boat burial at Scar on Sanday – these include a whalebone plaque, combs and gaming pieces.

Orkney and Shetland were a part of Norway until 1472 and the islands were ruled by Norwegian earls. Though some Scandinavian influences remain (including place names and people’s names), the most striking reminder is the St Magnus Cathedral in Kirkwall – which was dedicated to the Viking St Magnus – an Orkney earl killed by his cousin, with whom he shared power. It’s a beautiful red sandstone building – and is a central part of Orcadian life – hosting concerts, church services, weddings, and funerals.

Fascinating thought: St Magnus’s bones were found within one of the Cathedral’s pillar – identified by a split skull – St Magnus was killed by an axe blow to the head.

The Italian Chapel and the Churchill Barriers

During the First and Second World Wars, the British Naval Fleet was stationed in Orkney in the large natural harbour of Scapa Flow. Disaster struck in 1939 when The Royal Oak was torpedoed by a German submarine, killing 800 men. Winston Churchill ordered the building of barriers – which would blockade the channel between Orkney’s south isles, and join the islands to the mainland. Much of the work was carried out by Italian POWs who also built a lovely chapel out of Nissan huts and scrap metal – it still stands today – a symbol of peace and friendship between the Italians and Orcadian people.

Fascinating thought: More than 1300 Italian prisoners of war were captured in North Africa in 1942 and were taken to Orkney. 550 were taken to the uninhabited island of Lamb Holm. In the winter, it must have seemed very far away from home!

The Brough of Birsay

Fascinating thought: The name Birsay comes from the Old Norse ‘Byrgisey’ – the fort island. The tidal restrictions of the island make it difficult to imagine living here!

The island of Rousay is known as the Egypt of the North – it contains over 100 identified archaeological sites! The chambered tombs here have fabulous names such as Blackhammar Tomb and Taversoe Tuick. Most significant is the massive Midhowe Chambered Cairn – which is 100ft long and 40ft wide and contained 25 crouching corpses. There is also an impressive Iron Age broch at Midhowe which was occupied from around 200BC to 200AD.

Fascinating thought: Brochs are circular tower structures, often surrounded by houses. They were thought to be where people fled to safety when they came under attack – like a castle keep. Opposite Midhowe Broch, on the mainland, sits the Broch of Gurness – indicating that this coast was once possibly a dangerous place!

The Kirbuster Farm Museum and the Corrigal Farm Museum offer a fascinating glimpse into rural island life in previous years. Whilst ‘south’ influences, such as wallpaper, can be seen, these buildings remain uniquely Orcadian. There are box beds to keep out the draughts, peat fires and smoked fish, and the animals you find at Kirbuster and Corrigal are breeds of sheep and poultry that would have been found around an Orcadian farmyard in the 18th century.

Fascinating thought: In Kirbuster you’ll see a room layout similar to Skara Brae, with a central hearth and beds at the side of the room. It is clear that this design remained popular in Orkney from 3000 BC until 1700AD.

North Ronaldsay is the most remote of the Orkney Islands, and has a unique heritage and history. Most famously, in North Ronaldsay, sheep are kept off the farmland by a sheep dyke that surrounds the island, keeping them on the beach. North Ronaldsay was also one of the last places where the old Orkney Norn language survived, and a wander through the island will show that many old farming practises have remained. Many of the old fishing practices and boat designs have also. Taking a trip to North Ronaldsay is like taking a trip back in time – and we’d highly recommend a visit to the top of the North Ronaldsay Lighthouse too!

Fascinating thought: The sheep dyke around the island is 12 miles long and 6ft high. It was originally built to keep sheep off the beach as seaweed was harvested for iodine. Later, sheep were sent outside the wall so that more valuable cattle could graze on the farmland.

The island of Hoy is a favourite with visitors. The dramatic and beautiful valley of Rackwick was once home to resourceful crofter / fishermen, and was visited by a shop boat. The Dwarfie Stane, on the road to Rackwick, is an ancient tomb carved out of a huge slab of rock. At Lyness, the Scapa Flow Visitors Centre offers a glimpse, through artefacts and photos, of showing you what life was like in Orkney during wartime. Please note though: the Scapa Flow Visitors Centre is closed for major renovations until 2020. There’s also a brilliant Lifeboat Museum at Brims and The Martello Towers – remnants from the Napoleonic wars – on the island of Hoy.

Fascinating thought: At Lyness you can see WW2 torpedo storage bunkers and the ruin of a cinema/theatre which was once the largest in Europe and once entertained Winston Churchill and the King! 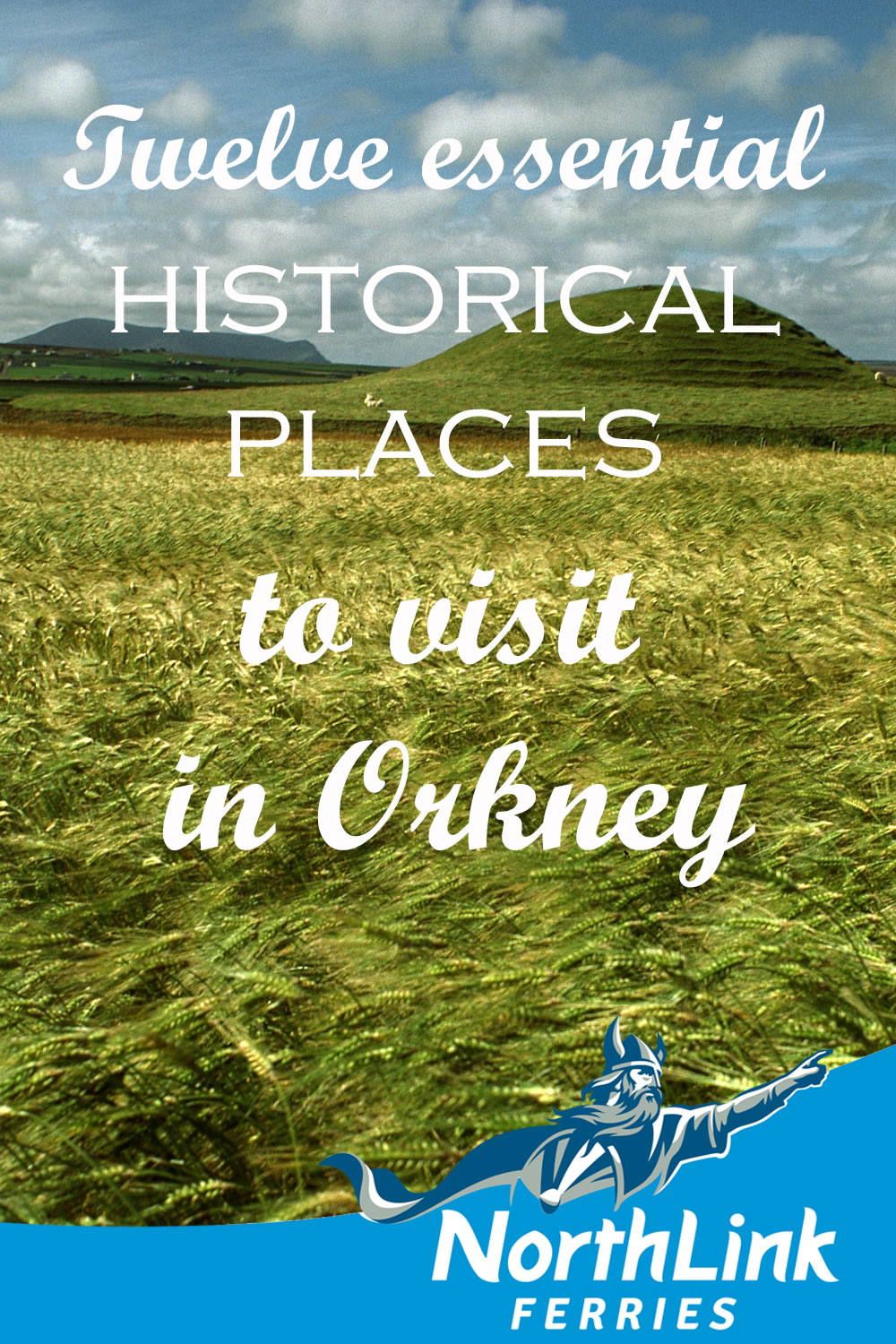