For those interested in history, heritage and archaeology, Caithness does not disappoint. The area has a rich backstory that covers Neolithic burial chambers, Pictish stones, Viking graves, medieval castles, wartime posts and links with the Royal Family. We’ve compiled a list of 11 essential historical places for you to visit during your time in Caithness.

Set close by Loch Stemster, inland from Lybster, you’ll find the intriguing moorland location of the Achavanich U-shaped stone setting. This stone circle is unusual in that it forms a horseshoe shape and the narrow sides of each stone point inwards to the centre. Erected roughly 4,000 years ago, 35 stones stand with another six fallen. Visitors are welcome to wander amongst the stones, of which the tallest is over two metres.

Fascinating thought: As with most standing stones, the exact purpose of Achavanich remains unknown. However, cremated bones were found at the site, which indicate it may have been used for some kind of ritual purpose.

All along the coast of Caithness you’ll find the ruins of castles, some of which are perched quite precariously on cliff edges. Castle Sinclair Girnigoe, on the outskirts of Wick is one such example, and a lot of good work is going into saving it from coastal erosion. It’s a fantastic place to visit with a colourful history dating back to the 15th century.

Fascinating thought: When you watch the waves sweeping against the cliffs below the walls of Castle Sinclair Girnigoe it’s quite a thought to imagine living so close to the sea. In terms of defences though, you would have been quite safe within these walls!

Dunbeath (pictured) is notable for being the birthplace of author Neil M Gunn. The Dunbeath Heritage Centre, in the heart of the village, shows you the landscape and people of Dunbeath and how these influenced Gunn and his work. As well as lovely illustrations of Gunn’s ‘Highland River’ you’ll see life size figures representing local people from different eras. There are also carved stones and the iron gate of Dunbeath Castle to see.

Fascinating thought: The Dunbeath Heritage Centre was once the school where Neil M Gunn received his early education!

Offering a glimpse into Caithness crofting life in the past, Mary Ann’s Cottage in Dunnet was only recently vacated by 93 year old Mary Ann Calder in 1990. The cottage was built in 1850 and housed three generations of Mary Ann’s family, and is filled with old tools, domestic implements, family belongings, a sea chest and furniture. The most modern item was a telephone. This museum shows how different daily lives in Caithness were, how folk had to make do, or create things with their own hands, in the not too distant past!

Fascinating thought: There’s a healing stone on display in Mary Ann’s Cottage. This is a polished stone which was used as a charm to heal disease and a reminder of pagan culture in the north of Scotland.

“Canisbay Kirk was where the Queen Mother worshipped on Sundays during her holidays in Caithness. There is now a lovely slate memorial to her at the church”

Dunnet Head is the most northerly point on the UK Mainland and is worth a visit for the amazing panoramic view across the Pentland Firth to Orkney and back across the highlands of Caithness and Sutherland. It’s also the site of a lighthouse built in 1831 by Robert Stevenson (the grandfather of Robert Louis Stevenson) and was used during wartime to watch the approaches to Scapa Flow, the naval base in Orkney.

Fascinating thought: If you think the lochs on the approach to Dunnet Head look lovely, you may be pleased to learn that they are stocked with Brown Trout! Permits are available from CH Haygarth & Sons Fishing Tackle shop in Dunnet.

The Grey Cairns of Camster

Nestled on a lonely moorland between Wick and Thurso, the Grey Cairns of Camster are two very mysterious buildings indeed. Appearing as two piles of light grey rubble amongst a heathery backdrop, one of the cairns is round with one entrance, and the other is long and humped, with two entrances. Both cairns were used to house the dead of a farming community in 3500 BC.

Fascinating thought: Inside the Camster Cairns there were found burnt human bones, pottery, flint knives and tools. Within one of the chambers two skeletons had their leg bones removed. What rituals did the Neolithic people carry out with their dead?

It’s widely thought that John O’ Groats is the most northerly point of the UK, but in truth this distinction goes to Dunnet Head. The significance of John O’ Groats is that it is in the far north east, whereas Land’s End is on the far south west tip of the UK. These two are the furthest distance apart of any two places on the UK Mainland – with 874 miles separating them. In 1865, an American called Elihu Buritt walked this distance, and ever since them there have been many fund-raising treks to and from John O’ Groats.

Fascinating thought: The name comes from a Dutchman, Jan de Groot, who ran a ferry to Orkney and charged 2p a trip!

The Whaligoe Steps is a stone staircase down a steep cliff outside Ulbster (the turning is opposite the signpost for the Cairn of Get). The steps lead down to the harbour of Whaligoe Haven, which is surrounded on three sides by 250ft cliffs. From the 18th century to the 20th Century, fisherwomen, some in their seventies, would meet the incoming fishing boats, gut the fish and carry the catch in baskets on their backs up the 330 steps and then on 7 miles to the market in Wick! For modern day visitors who run out of puff halfway up the steps; this is an impressive feat of strength!

Fascinating thought: The Whaligoe steps were commissioned by Captain David Brodie, who commissioned a local stone mason to carve them in 1793. It cost him £8!

The Hill o’ Many Stanes

On a hill north of Lybster is the archaeological mystery – the Hill o’ Many Stanes. You’ll find a layby with a signpost and a gate – through the gate it’s a 100m walk to the site. Here you will see 200 stones in 22 not-quite straight rows fanning out to the south. The stones have been deliberately placed, each is packed with smaller stones around its base. It is possible that the stanes were used to predict the movements of the moon.

Fascinating thought: As it is almost impossible to date The Hill o’ Many Stanes it is difficult to even say when the stanes were placed, let alone why! However the mystery is half of the attraction – why not take a guess at its purpose during your visit?

The Castle of Mey

The Queen Mother first visited what was Barrogill Castle in 1952 while mourning the death of her husband, King George VI. She fell for the building’s charm and decided to bring the castle and its gardens back from abandonment. These days it’s a very fine building with a fascinating tour which allows you to step into the dining room, sitting room and study which are still used by the Royal Family today.

Fascinating thought: Prince Charles, the Duke of Rothesay, still visits the Castle of Mey every summer. He was very close to his grandmother and is said to enjoy fishing in Caithness!

Like many churches, Canisbay Kirk stands on the site of an older building mentioned in texts as early as 1222. An Iron Age broch possibly stood on this site before then. The present kirk was built in the 17th Century. Canisbay Kirk was where the Queen Mother worshipped on Sundays during her holidays in Caithness. There is now a lovely slate memorial to her at the church.

Fascinating thought: In the churchyard of Canisby Kirk you’ll find the grave of Jan de Groot. 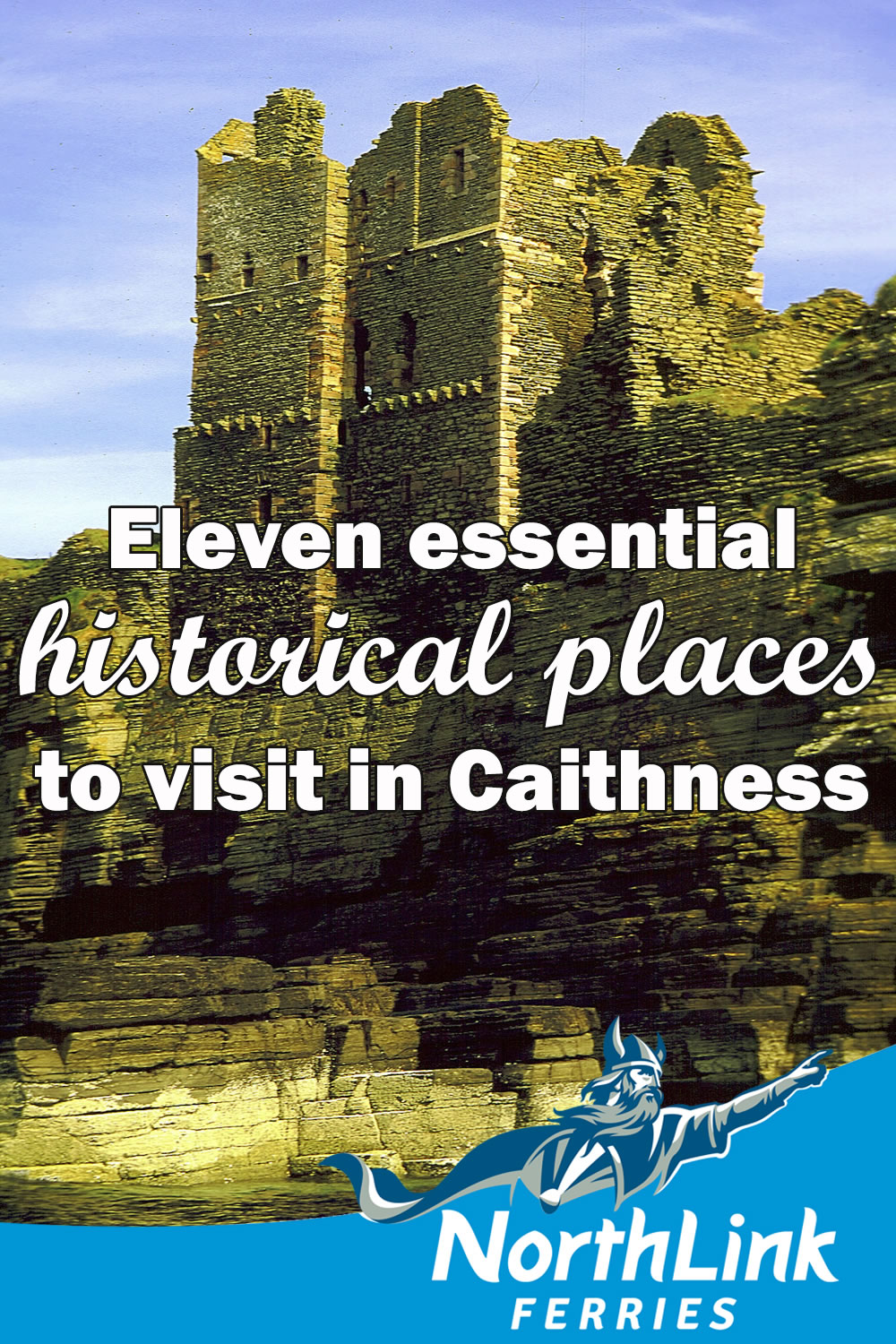