Essential sites to visit in Caithness

There really is a tremendous amount to see and do in Caithness. The landscape is quite beautiful – you could fill a camera’s memory card very quickly – and there are a great many lovely beaches to roll your trouser legs up on. However, if you are looking for the must-see sights of Caithness, then we’ve compiled a list of great places to go!

This is recommended only for those with a head for heights! The Whaligoe Steps are 330 stone steps which descend a cliff-face, and which in the past were used by fisherwives. The harbour at the bottom is dramatic and quite inaccessible, being surrounded by 250ft cliffs on all three sides. However, in 1793, Captain David Brodie spent £8 to cut the steps and by the 1800s over 20 fishing boats used Whaligoe. Women would gut the fish in the harbour and then carry fish-filled creels up the steps to be sold in Wick, some 8 miles north. The women (some in their seventies) would also carry heavy salt barrels down the cliff steps so that salted herring could be taken away by boat. The name Whaligoe comes from when beached whales were brought into the inlet to be butchered nd processed.

Also at the Whaligoe Steps you’ll see a boat winch and a barking kettle (for heating tar to waterproof nets and floats).

Please be careful at the Whaligoe steps – though the steps are well maintained, they can be slippery on a rainy day.

A common misconception is that John O Groats is the most northerly point on Mainland Britain, however nearby Dunnet Head is about 2.35 miles further north. John O’Groats is actually one end of the longest distance between two points on the British mainland – John O Groats is located in the North East and Land’s End is in the South West – 874 miles seperates them.

At John O’Groats you’ll find gift shops, a Tourist Information Centre, coffee shops, self-catering accommodation, the famous Journey’s End signpost and an attractive harbour. John o’ Groats was named after a Dutchman, Jan de Groot, who was allowed to run a ferry service over from the Scottish Mainland to Orkney in 1496, just 28 years after Scotland had acquired Orkney from Norway. You can find De Groot’s gravestone in Canisbay Kirk, two miles away.

3. The Castle of Mey

The late Queen Mother enjoyed visiting the beautiful and windswept Caithness area and, whilst visiting in 1952, shortly after the death of her husband King George VI, she saw the Castle of Mey for the first time. The isolated charm of the Castle and Gardens, which was on the verge of being abandoned, is what drew the Queen Mother to come to its rescue.

She renovated the property between 1953 and 1955 and the castle is still set out in the style specified by the Queen Mother. The rooms are filled with the Queen Mother’s personal belongings and you get a sense of the things she enjoyed. You’ll see shells from her daily walks to the beach, a video of Faulty Towers by the television, and there are amusing Scottish and Royal souvenirs throughout the building – she had a real sense of fun! The Queen Mother cherished the castle for its privacy, though she was very much part of the community, entertaining guests here and attending the Sunday church service at nearby Canisbay Kirk. HRH Prince Charles, Duke of Rothesay now stays at the Castle of Mey every August.

The Castle of Mey is located 12 miles from Scrabster and has friendly and knowledgeable guides, a stunning sheltered garden where fruit, vegetables and flowers are grown, a visitor’s centre, tea room and animal centre (with a donkey and raucous geese) which children will love!

We love the dramatic Castle Sinclair Girnigoe. Located by Staxigoe outside Wick, this castle sits precariously on a cliff edge! Park next to Ross Head Lighthouse and walk to the castle – there are some fascinating information boards along the way. The castle can be reached by a new footbridge and is a great place to explore. It’s safe for older children too – as the dangerous parts are fenced-off.

Castle Sinclair Girnigoe was an impressive defensive castle in its day, which was transformed into a grand mansion during the Renaissance period. Unfortunately in 1651 the Castle was seized by Cromwell and this was the start of its decline. Later the castle was part of a dispute over the title of Earl of Caithness and the castle’s roofs, walls, and floors were deliberately destroyed. Since then high winds and erosion of the surrounding cliffs by the sea have damaged the castle further.

However, thanks to the amazing work done by the Clan Sinclair Trust to reverse the damage, all it takes is a little bit of imagination to enjoy this spectacular atmospheric castle.

5. The Grey Cairns of Camster

The Grey Cairns of Camster offer a unique view into how Neolithic people buried their dead 5000 years ago. These are two chambered cairns that are quite different from one another, situated 100m apart and sitting in the middle of the boggy Flow Country, 5m north of Lybster on the A99. It is thought that this isolated position has helped preserve the cairns from being plundered for stones or flattened for farming. Both cairns are reached by seperate wooden walkways from a layby.

One of the cairns is known as Camster Long, and as the name suggests is 60m long. It is not rectangular however, as one end is much wider than the other (take a look at it on Google Earth!) In Camster Long, human bones were found mingled with horse, pig, oxen and deer bones. Camster Round is a circular cairn which is 18m in diameter. In here, human bones were discovered in a sitting position – however, all of the bodies were missing leg bones – as if these had been removed.

Both Neolithic cairns can be accessed through narrow passages, and both are free to visit and open all year.

Dunnet Head is the most northerly point in mainland Britain and is a 300ft sea cliff with a lighthouse perched on top! Visitors can enjoy a scenic drive up to the lighthouse car park. The cliff commands a spectacular view of the Orkney Islands; it is less than 7 miles south of the nearest point on Orkney. Make sure you take your binoculars – there’s a cliffside walled off area (which is safe for children) where you can view the RSPB seabird colony. Spring is a good time to visit – you’ll find the cliffs teeming with birds!

Dunnet Head lighthouse itself was built in 1831, stands at 66 feet tall and was designed by Robert Stevenson. Though the lighthouse isn’t open to the public, there is a gallery there and a range of walks and views which shouldn’t be missed on a trip to this beautiful area of northern Scotland. Make sure you don’t miss the beach at lovely Dunnet Sands nearby.

The lovely village of Dunbeath is probably best known as the birthplace of Scottish author Neil M Gunn, who wrote Highland River and The Silver Darlings. It’s a scenic village (pictured above), nestled into a steep sided valley formed by the Dunbeath Water, with a little harbour in the centre.

We’d highly recommend a visit to the Dunbeath Heritage Centre which is situated in Neil M Gunn’s former classroom. It’s a brilliant little museum, costing just £2.50 per person to visit, and maps and history and painted into the floorboards and the glass screen which divides the exhibitions (and changes throughout the day and through the seasons). The books of Neil M. Gunn are explored here, as well as Picts, Vikings, clans, crofters, fishermen, the Highland Clearances and more. If you wish to trace your ancestors, the custodians at the Dunbeath Heritage Centre are more than happy to help!

Duncansby Head is close to John O’Groats – just take the road opposite the John O’Groats Filling Station on the A99 for nearly two miles and you’ll reach the Duncansby Head Lighthouse car park. From here, walk over the highest part of the surrounding landscape and you’ll be greeted with the spectacular sight of the Stacks of Duncansby – two large jagged sea stacks.

If you’re feeling fit, we’d recommend a walk to the stacks – you’ll pass the Geo of Sclaites – a sea-cut cliff brimming with seabirds and Thirle Door – a rocky arch. Keep walking south along the well-trodden path. Much of this walk is safe, the cliff edge is fenced off, though there is the option to use a gate and get closer to the edge. You’ll see puffins in the early summer months, and seals wallowing by the stacks. We’d advise walking a bit south of the stacks to catch them in the sunlight!

Mary Ann’s Cottage is a croft which was occupied by three generations of the same family. Built by John Young in 1850, the cottage remained occupied and the croft was worked, using largely the same practices, until his granddaughter, Mary-Ann, just before her 93rd birthday, moved to a nursing home in Wick, in 1990. At this point, the Caithness Heritage Trust acquired the croft, which provides a snapshot into life in the remote Scottish Highlands. Visitors will find the peat fire burning and everything preserved, a natural blend of the old and the new, as though Mary Ann has popped out for a moment.

It’s a wonderful reminder of a simpler time when, despite the hardships, families and communities lived fulfilled and happy lives. Mary Ann’s Cottage is located on the road to Dunnet Head and costs £3 for entry. 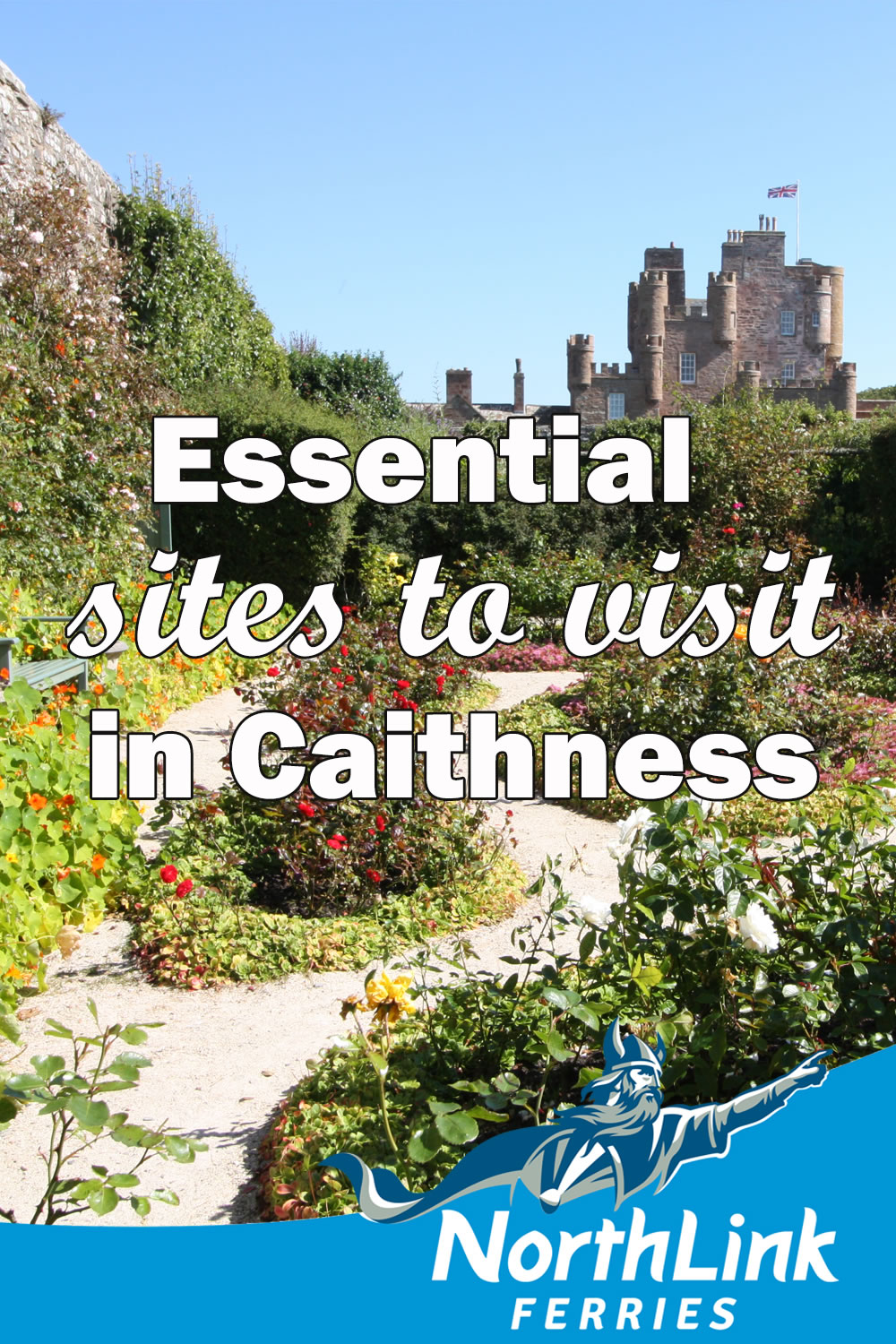