12 places to fall in love with in Shetland

Are you looking forward to a holiday in Shetland? We know how hard it can be to pin down which places to visit so that you don’t miss a thing. To help you in your planning, we’ve compiled a list of places that we’re sure you’ll fall in love with – and we’ve gone for a few of the lesser-known areas.

Quendale beach, on the western side of the South Mainland, has changed significantly as shifting sands alter the landscape, and the unique dune system stretches far inland. Testament to the changes brought to this area is found in the excavations at Broo – an abandoned township buried under sand some 300 years ago.

These 12 beauty spots are dotted all over the islands, so you’ll be sure to explore all corners.

When arriving with NorthLink, you’ll arrive in the picturesque port of Lerwick – the UK’s most northerly town and one of the country’s leading fishing ports. We suggest taking an early morning stroll through Lerwick’s old town, exploring the fascinating 18th-century lanes and lodberries with their stone foundations proudly built into the sea, defying time and tide. Head to South Commercial Street to find the fictional home of enigmatic TV star Jimmy Perez from the hit tv show Shetland, or dip your toes in the water at Bain’s Beach and search for a piece of sea-worn pottery.

For the most northerly point of Mainland Shetland and the spot of a once-thriving deep-sea fishery, known as da haaf fishing, head to Fethaland in the North Mainland.

The walk out to the now ruinous buildings that made up this 19th-century fishing station will take a few hours, so you might want to pack a picnic and OS Explorer No 469. Park responsibly at the end of the Isbister road – bearing in mind that the farmer requires access to the farm road. From here, you can take the direct ‘overland’ route following the farm track or do a longer, more scenic coastal circular.

No matter what way you choose to go, you’ll be rewarded with some fantastic views and outstanding built heritage at the end of the peninsula.

Unst – Shetland’s most northerly island – is usually always on the list for a visit to Shetland, and rightly so, there are lots of things to see and do in this small island.

One of the best places is the Eastings Sand at Sandwick, just a few miles northeast of Uyeasound. Park at Hannigarth and walk to the beautiful sandy beach, which is almost always deserted.

Look for the remains of the impressive Viking longhouse at the head of the beach. For those who fancy a longer walk, follow the coast out to the graveyard at Framgord and look for the Hogback graves of former Norse settlers.

Hike out to Deepdale in Shetland’s West Mainland for a slice of paradise and enjoy the setting sun on a summer’s night. The walk is around 5 miles (8km) and can be challenging in parts. Park at the Voe of Dale (Dale of Walls beach) and follow the coast north towards Sandness (OS Explorer 467).

This piece of coastline, with views across to the most westerly island of Foula, is awe-inspiring. The cliffs are dramatic and rugged, hewn out by the powerful forces of the North Atlantic.

The smallest of the North Isles, Fetlar, is a beautiful island to explore. Known as the Garden of Shetland, the island has just opened a new campsite for caravans and motorhomes, allowing more people the opportunity to visit this peaceful corner of Shetland.

One of the best places to experience is the beach at Tresta. Flanked by the steep slopes of Lambhoga and with glistening sand that sparkles in the summer sun, this is the perfect place to enjoy a picnic – or even try a little wild swimming at 60° North! Getting to Tresta is easy; from the ferry, take the B9088 for two miles, and follow the signs for Tresta. The beach is unmissable!

No trip to Shetland would be complete without a visit to the uninhabited island of Mousa. World-famous for the broch that recently won the title of “Best Broch in the World” in the World Cup of Brochs. But, all jokes aside, the broch is phenomenal – it’s the best surviving example of a 2,000-year-old Iron Age round tower from anywhere in the world.

The island is also famous for its breeding colony of storm petrels and other wildlife and its shipwrecks – including Shetland’s former overnight passenger ferry SS St Sunniva that wrecked on the islands in 1930! (But don’t worry, there’s now a lighthouse keeping us on course!)

Heading back to the isles, this time we’re visiting Yell, the largest of Shetland’s trio of North Isles, and we’re seeing the serene, northern reaches of the island and the Sands of Breckon. The beach here is stunning, with golden sands and turquoise seas. The beach is usually quiet, offering the perfect place for contemplation.

Besides the beach, the area provides a fascinating glimpse into Shetland’s archaeological past. This secluded site has had almost continual occupation from prehistoric times, and the remains of past people can be seen all around the area.

To get here, follow the A968 north through Yell and, just before the Gutcher Ferry Terminal, turn left towards Cullivoe. Follow this road (B9083) for several miles – look out for the ‘brown’ tourist sign marked ‘Breckon Sands’. Follow this road for ⅓ of a mile and park responsibly at the end of the road and follow the path to the beach.

Shetland’s not short of beautiful beaches, and the sand at Quendale in the sweeping South Mainland is no exception. Quendale beach, on the western side of the South Mainland, is Shetland’s longest stretch of sandy beach and, at just short of a mile, is the perfect place for a stroll across the sand, enjoying the panoramic views out to sea.

This area has changed significantly as shifting sands alter the landscape, and the unique dune system stretches far inland. Testament to the changes brought to this area is found in the excavations at Broo – an abandoned township buried under sand some 300 years ago.

The best way to reach the Quendale Beach is to follow the A970 south until you almost reach Sumburgh. Follow the road signs for ‘Toab/Hestingott’, heading west, follow this road for about two miles until the road ends at some garages and the double carriageway gives way to a dirt track. Park responsibly and follow the track down to the beach.

Shetland’s northwest corner is strikingly beautiful, ruggedly exposed, and will take your breath away at every turn. The dramatic coastlines and outstanding geology are sure to impress, and one of the best places to marvel at the scenery is down at sea level, at Heylor, under the shadow of Ronas Hill – Shetland’s highest point.

With the ruins of a former fishing station and pier, this area is by the side of Ronas Voe, an impressive fjord-like inlet of seawater that stretches far inland along the side of Ronas Hill and its red granite heights.

The orange sand of the beach and the brisk wind that often tunnels down the voe are sure to leave a lasting impression.

Heylor is easy to find. Follow the A970 north towards Hillswick. At Urafirth, turn right towards Heylor and Swinister and follow the road for around half a mile before veering left towards Heylor.

Rooted in the West Mainland are the impressive cliffs and stacks at Wersterwick. Formed from red granite, they provide warmth to the landscape, yet their scale and sheer presence act as a stark reminder of the powerful forces that drive the North Atlantic, shaping the coastline around us. Enjoy a coastal walk between Westerwick and Silwick.

Gletness is an area that has been immortalised in music with Da Isles o’ Gletness waltz. It’s also an area that’s often overlooked, but a drive-through Nesting, stopping at Gletness to enjoy the views, is well worth it. This peaceful part of Shetland is stunning in its gentle beauty and a real contrast to some of the other, more dramatic coastlines explored in this blog.

Hamnavoe is a thriving fishing port and arguably the most picturesque village in Shetland, with a strong sense of community. It is on West Burra which can be reached by getting to Scalloway and crossing two bridges, first to Trondra and then, after a short drive, over to West Burra. Take a walk around the pier and marina in Hamnavoe, check out the small boats that work the productive waters around the area, or explore a little further with a walk out to the Fugla Ness lighthouse before the coastline back along to the Meal Sand (beach).

However you enjoy your holiday, we look forward to welcoming you on board! 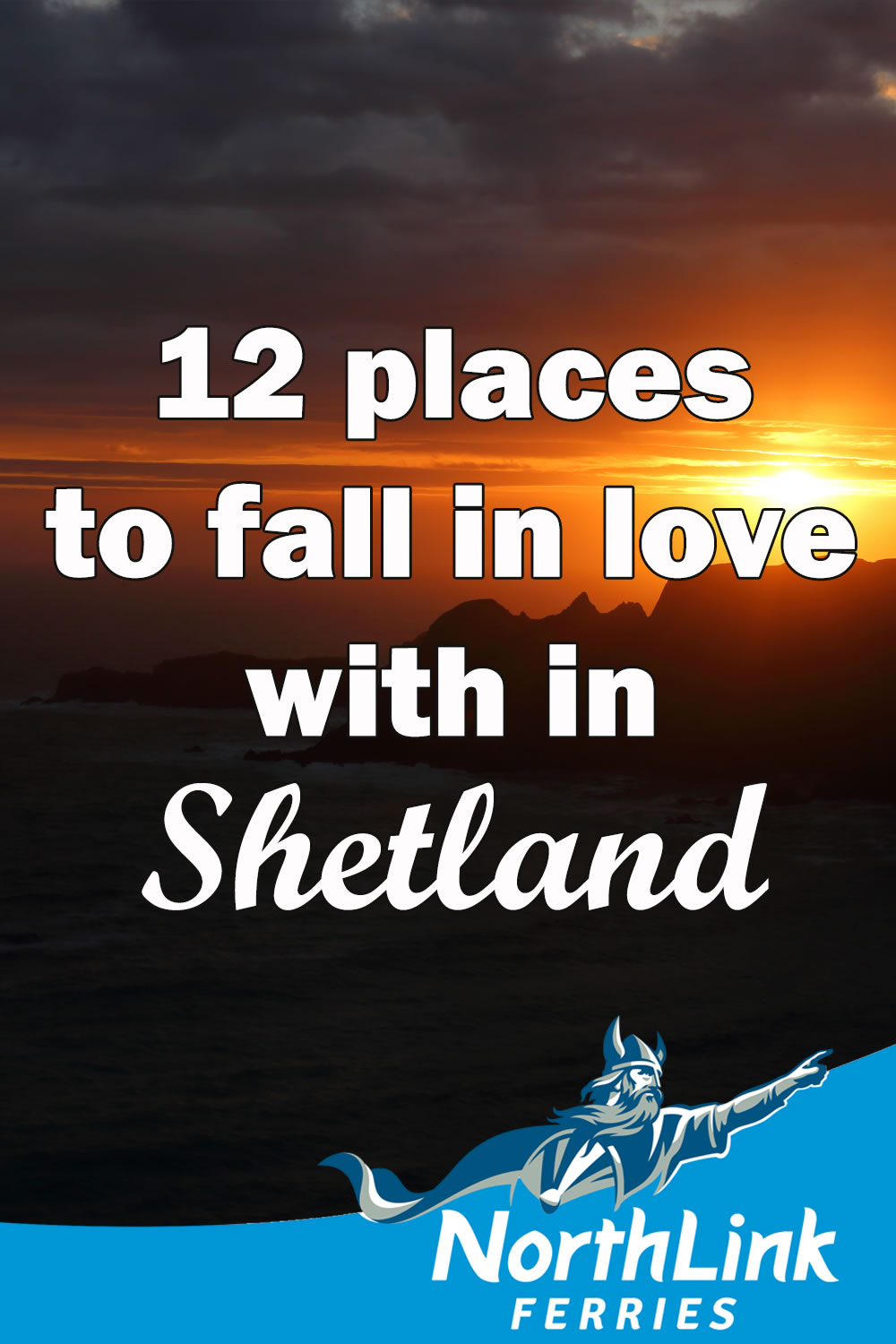