We are often asked for a list of essential places to visit in Orkney, and for those visiting Orkney for the first time, Skara Brae, the Ring of Brodgar and the Italian Chapel are must visits. However, if you’re staying for a few extra days, then we’ve compiled a list of 10 hidden gems in Orkney to see.

Close to the Birsay Kirkyard there is a large rockpool that is deep enough to swim in. This rockpool is filled by waves that wash over the rocks and become trapped. Whilst it is deep, it is possible for an adult to stand on the bottom with their head out of the water. Are you brave enough to try a dip?

We hope you enjoy visiting these interesting places off the beaten track in the Orkney islands. We also hope Islanders might use this list on a weekend to see some brilliant places, perhaps for the first time!

One of Orkney’s most impressive sea stacks is tucked away in Evie, behind a dark hill and the Swannay Loch. However, it is quite easy to see the Standard if you know how. We parked our car at the Swannay Loch and followed the road for a ½ mile west towards Birsay. At the corner where the road turns sharply downhill to the Swannay Brewery, leave the road, and follow the farm track in the other direction, for a third of a mile to the coast. Sheep graze nearby, and seabirds wheel around these 100m tall cliffs. From these precarious edges, you will get the most spectacular view of the Standard, a 50m tall sea stack which resembles a dorsal fin rushing through the water’s surface.

For the energetic we’d recommend extending the walk to explore nearby Costa Hill. This was the site of Orkney’s first wind turbine – a device erected in the 1950s.

One of the finest views in Orkney is just a twenty-minute walk from where MV Hamnavoe docks in Stromness. Just off the Back Road, opposite the Old Academy, there’s a footpath to Brinkies Brae. The start of the footpath is thought to be close to where the witch Bessie Millie sold favourable winds to sailors in the 19th century! Continue on, and after a short but steep climb amongst heather and granite, you’ll find a panoramic view across the town, out further to Orphir, Flotta and Hoy, and even to the Scottish Mainland. This view (pictured) is 80m above sea level, and watching large diving boats, creel fishing vessels and ferries puttering in and out of the busy harbour is a joy.

Brinkies Brae can also be reached via Downies Lane, and we’d recommend combining a climb with exploring the rest of Stromness’s wild outskirts. Can you spot owls gliding above the heather at the Loons?

Set just off Kirkwall’s harbour, the Orkney Wireless Museum is a hidden gem which has been run by volunteers since 1983. There are displays of radio sets which quite visibly decreased in size through the years – from large beautiful wooden radios from the 1930s to smaller portable models from the 1960s. The Orkney Wireless Museum also houses wartime communication radios, including a radio which sent Morse code across the Atlantic, radios used to communicate with fighter aeroplanes, radios which came from inside Spitfires and Bombers and even a radio from a U-Boat.

Our favourite item there? It’s a three-way tie between Orkney’s first house phone, the WW2 Invasion Warning radio from Kirkwall Police Station and the spy-suitcase!

The Brough of Birsay is a popular place to visit. Nearby however, there’s a hidden gem that is only really well known to Orcadians. Close to the Birsay Kirkyard there is a large rockpool that is deep enough to swim in. This rockpool is filled by waves that wash over the rocks and become trapped. Whilst it is deep, it is possible for an adult to stand on the bottom with their head out of the water. Are you brave enough to try a dip?

To reach the Birsay rockpools, drive on the B9056 from Marwick to Birsay. There’s a steep straight section downhill, which takes a sharp turn right to the Birsay Kirkyard. On that corner, park your car nearby (being careful not to block access for farmers) and walk along the farm track towards the coast for about 300m. There’s a footpath in the grass down to the best rockpool, which is located next to a flat shelf of rock. Please be careful as the surrounding rocks can be slippery so only stand on bare, dry stone.

Deerness is often referred to as ‘almost an island’ and when you look at Orkney’s East Mainland on a map you can see that the parish of Deerness is joined to the parish of St Andrews by a sandy ayre. These days there is a road across the ayre, and on the north side of the road there is St Peter’s Pool, a large shallow sandy bay which is ideal for watching waders. On the south side is a spectacular beach, with big sand dunes, scatterings of pebbles and powerful waves. This is Dingieshowe.

The beach is named after the mound known locally as a ‘howe’ which was an Iron Age broch now buried in the sand. The name also comes from the fact Dingieshowe was the site of a Norse parliament, or a ‘ting’. Dingieshowe is a great beach for picnics, ideal for paddling and for dog walking, with fantastic view of the island of Copinsay and handy toilets by the car park.

In the southern tip of South Ronaldsay, there’s a small chapel above the sand and pebbles of the seashore at Burwick. St Mary’s Chapel was built in 1790 on the site of an earlier church, perhaps on the site where the first Christian missionaries arrived in Orkney. With its crowstepped gable ends, bell tower and plain interior, it is a lovely example of a simple Orcadian parish church. It has been recently restored after being struck by lightning in 2013.

There are many intriguing things at St Mary’s Chapel. A gable end stands alone in the kirkyard. When looking at photos of St Mary’s Chapel from the air, it is clear that the arch and entrance were part of the graveyard wall before the kirkyard was extended. Another reason to visit is the mysterious stone inside St Mary’s Chapel with footprints carved into it. Some say that these are the footprints of St Magnus, but more likely it was a Pictish coronation stone, used in ceremonies to inaugurate new rulers.

Not many people spot it, but on the drive from Stromness to Kirkwall, there’s a hidden gem close to Finstown, on the right-hand side, opposite Binscarth Woods. On a hillside is a tall stone stack which leans precariously into the wind, known as Buckle’s Tower.

It was built in the late 19th century by a local lad, William Buckle. Before the invention of barbed wire fences, young folk were employed to make sure cattle didn’t stray, and Buckle was a herd-boy for Binscarth Farm. Building the 2m tall tower was an impressive accomplishment – especially when you consider that he built it out of boredom.

Buckle’s Tower can be reached by parking at the layby at the Heddle Quarry and walking down the road a little before following a fence inland and uphill for ½ mile. There’s a spectacular panoramic view of the Orkney mainland from here. We walked over the other side of Heddle hill to rejoin our car. Please be aware skill at crossing fences and footwear for wet ground is required to visit Buckle’s Tower.

Nearly every coast on the island of Sanday has long white sand beaches, and all are dazzlingly beautiful. Though it is located at Stove, only 3 miles from the Loth ferry terminal, one of our favourites, Doun Helzie, is also one of the trickiest to reach. First, visitors need to climb a hill, following the track up from the electric substation. Then they would walk the well-trodden footpath down to the coast, and turn north, following the clifftop until it descends to the beach.

At Doun Helzie, the beach is backed by rocky cliffs (those same cliffs that make the beach difficult to reach). Winter waves have carved deep caves into the rock. Children will love exploring these, imagining pirates living by candlelight in the darkness of the caves!

9) The Castle of Burrian, Westray

In Orkney there are two types of castle; the first is a medieval building and the second is a sea stack. The Castle o’ Burrian in Westray is the latter, but unlike the thin and tall Old Man of Hoy, it is a short (20m tall) and grassy mound. The reason it is a hidden gem is because puffins live here, and the low surrounding cliff are the easiest place in Orkney from which to view them. From April to August, between 200 and 300 of these colourful birds nest in burrows that they dig out of the Castle o’ Burrian with their sharp claws.

The Castle o’ Burrian is located two miles north of Rapness, the ferry port in the south of the island. There’s a road marked ‘puffins’, a place to park by an old mill and a short coastal walk to the sea stack. Colourful and comical puffins are not shy at all, and very easy to take photos of here.

For amazing cliff scenery, the west coast of the island of Hoy is hard to beat. Those who sail regularly on MV Hamnavoe from Orkney will be familiar with St John’s Head and the Old Man of Hoy, but this series of dizzyingly tall cliffs begins with the Kame of Hoy. The Kame of Hoy is a steep rising hillside which suddenly cuts to a cliff drop. The now green hillside is composed of gravel deposited by a melting ice sheet.

Keen hill walkers will enjoy a trip there. The Braebister district of the island, where several small farms used to operate is on the approach. There is a beautiful green meadow before the hillside at the Kame begins. On the seaward side of the Kame there are said to be huge sea caves where the sea breaks underneath the cliffs with a thunderous roar – as John Bremner in Hoy, The Dark Enchanted Isle put it, ‘as if a thousand salvos were being fired from heavy guns at once.’

At the top of the Kame of Hoy there is an amazing rocky landscape to discover; this is a place that very few people visit. The Kame of Hoy is particularly beautiful when a sunset lights the red sandstone cliffs ablaze! 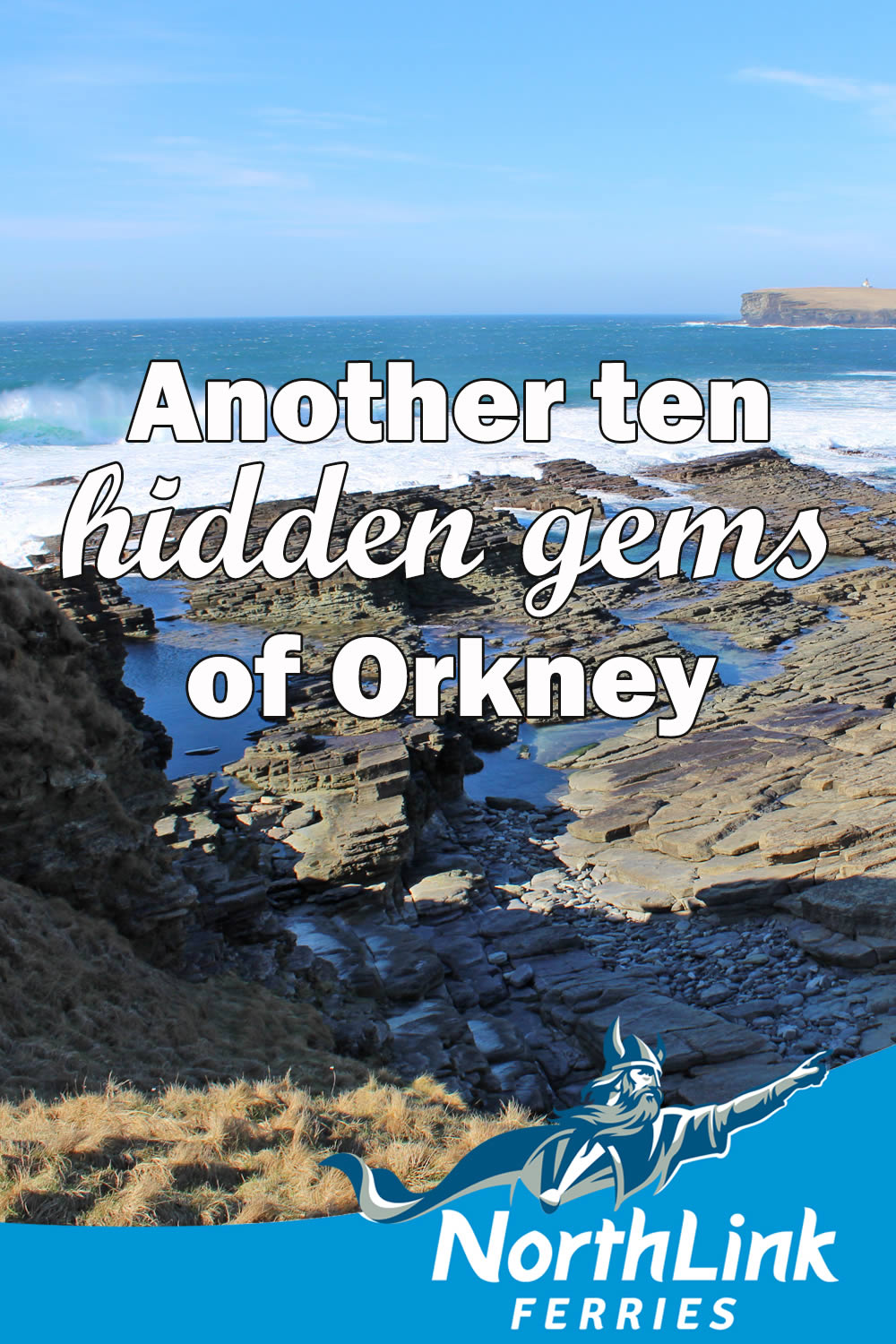