Each year we’ve compiled a list of some of the best places to visit in Shetland that are less well known. We hope that, once you’ve seen St Ninian’s Isle, Sumburgh Head and Scalloway Castle, you’ll consider visiting one of these ten brilliant Shetland hidden gems!

Dore Holm is an amazing rock formation with a large natural arch standing in the sea, off the coast of Eshaness. It’s looks like a pony drinking from the sea and is a pretty spectacular sight all year round, especially during the winter when waves crash through the natural arch!

Aith is a lovely little village which lies on the picturesque road between Walls and Voe. The village stands at the head of sheltered Aith Voe and is the home of the westside RNLI Lifeboat – the most northerly in Britain. There’s also a marina, a general store and Post Office, the West Mainland Leisure Centre and a large primary and secondary school (Aith serves as a centre for the wider community in the surrounding area). Aith was home to John Nicolson, a prolific writer who wrote the words for The Galley Song which is sung at Up Helly Aa!

The Quendale Mill was built in 1867 and ground the grain for crofters during the winter when there was plenty of water in the dam to drive the Mill’s machinery. Though the Mill ceased operations in 1948, it’s now a super visitor attraction open from April to October, with illuminating tours about crofting in the past, a craft shop and cafe. The Quendale Mill is located a quiet valley in the south of Shetland, close to Garths Ness where the Braer oil tanker was wrecked in 1993. The surrounding area has some of Shetland’s best land and much of Shetland’s milk comes from dairy farms nearby.

The cliffs at Eshaness are pretty amazing to visit. Eshaness is a long stretch of western facing coastline, made up of volcanic lava rocks from 350 to 400 million years ago when Eshaness volcano was part of large supercontinent near the Equator. Particularly impressive along this coastline is the dramatic Grind o da Navir. This is a breach in the cliffline, which has opened into an amphitheatre which sea can spray through. The sea has also tossed out many tonnes of rocks over the years – it’s an impressive reminder of the power of the sea!

Located on the north west tip of the west mainland of Shetland, in Sandness, the three Huxter Clack Mills date back to Norse times; though one was still in use in the 20th century. They sit astride a stream that flows from a small loch to the sea and visitors will see a stunning views of Papa Stour! The mills are identical and are only 5m by 3m with a 1/2 metre high entrance. The flow of water powers horizontal wheels inside which turn a quernstone to grind flour. The clicking noise they make gave them the name clack-mills! The lower mill still has it’s wooden mechanism intact.

The Hoswick Visitor Centre has some fascinating displays as well as a lovely cafe. It’s located in Sandwick in the South Mainland and the content of the museum is very much linked to the area. The Hoswick whale case in 1888 was when fishermen drove 340 whales ashore, and then fought a legal battle and won, to prevent the landowner receiving a share of the profits! Other displays feature textile machines (the museum was formerly a Shetland Tweed weaving shed) and a collection of vintage radios.

Underhoull is a series of Viking longhouses on the island of Unst. There are more rural long houses in Unst that anywhere else in the world, including Scandinavia. Unst was the first landfall for travellers from Norway; it was fertile with good harbours and soapstone for carving. The sandy bays below Underhoull were ideal for pulling longships ashore. The longhouses here were 23 metres long by 5 meters wide. The main room had a sprung floor to keep it dry and a central fire. One of the rooms of Underhoull was a byre to house animals! Underhoull Broch is also an impressive building to visit nearby!

Dore Holm is an amazing rock formation with a large natural arch standing in the sea, off the coast of Eshaness. It’s looks like a pony drinking from the sea and is a pretty spectacular sight all year round, especially during the winter when waves crash through the natural arch! To reach Dore Holm, drive to Eshaness and follow the signposts as far as the road will go to Utstabi (Old Norse for Outermost farm) and park. Then you need to walk down a slope, past a rocky beach; the Stenness Haaf fishing station; and up another gentle slope towards the coast.

If you’re interested in Vikings then we’d recommend visiting the quarry at Catpund. Park on the layby just south of Cunningsburgh and you’ll spot Catpund burn. Follow this up the hill to a quarry where you’ll see chisel marks and hollows in the hillside and in the bed of the burn, under the water. These were carved by Neolithic folk but more extensively by Vikings. They were extracting soapstone or stearite, a soft rock known as kleber in Shetland. This could be worked with tools to make bowls, utensils, pots, plates, and weights for fishing and looms. When soapstone is put in the fire it becomes hard and heat resistant. To see examples of soapstone artifacts, visit the Shetland Museum and Archives.

The Ness of Garth are the ruinous remains of a fort which stands on a lovely coastline near Sandness. To reach it you need to drive to da Westside and make your way along a bumpy coastal road, dotted with lochs and with sheep-filled fields on either side. The Ness of Garth is next to the Bay of Garth and here you’ll find the ruins of two stone-faced ramparts. There are other buildings in evidence here too – possibly a monastic settlement. Please be careful though, as this promontory fort becomes an island at high tide!

Located in the North of Shetland, just after Collafirth, the Beorgs of Housetter is a boulder covered hill just a short walk from the A970. At the foot of the hill are a pair of red granite standing stones known as the Giant’s Grave. They stand at 2m and 2.7m and are the remains of an almost totally ruined chambered cairn. In the past the cairn must have been quite impressive! You’ll also find another chambered cairn called Trowie Knowe. The boulder strewn slopes to the west are known as the Giant’s Garden. Though it’s hard to spot from the road, look out for the pink standing stones which contrast from the surrounding white boulders. 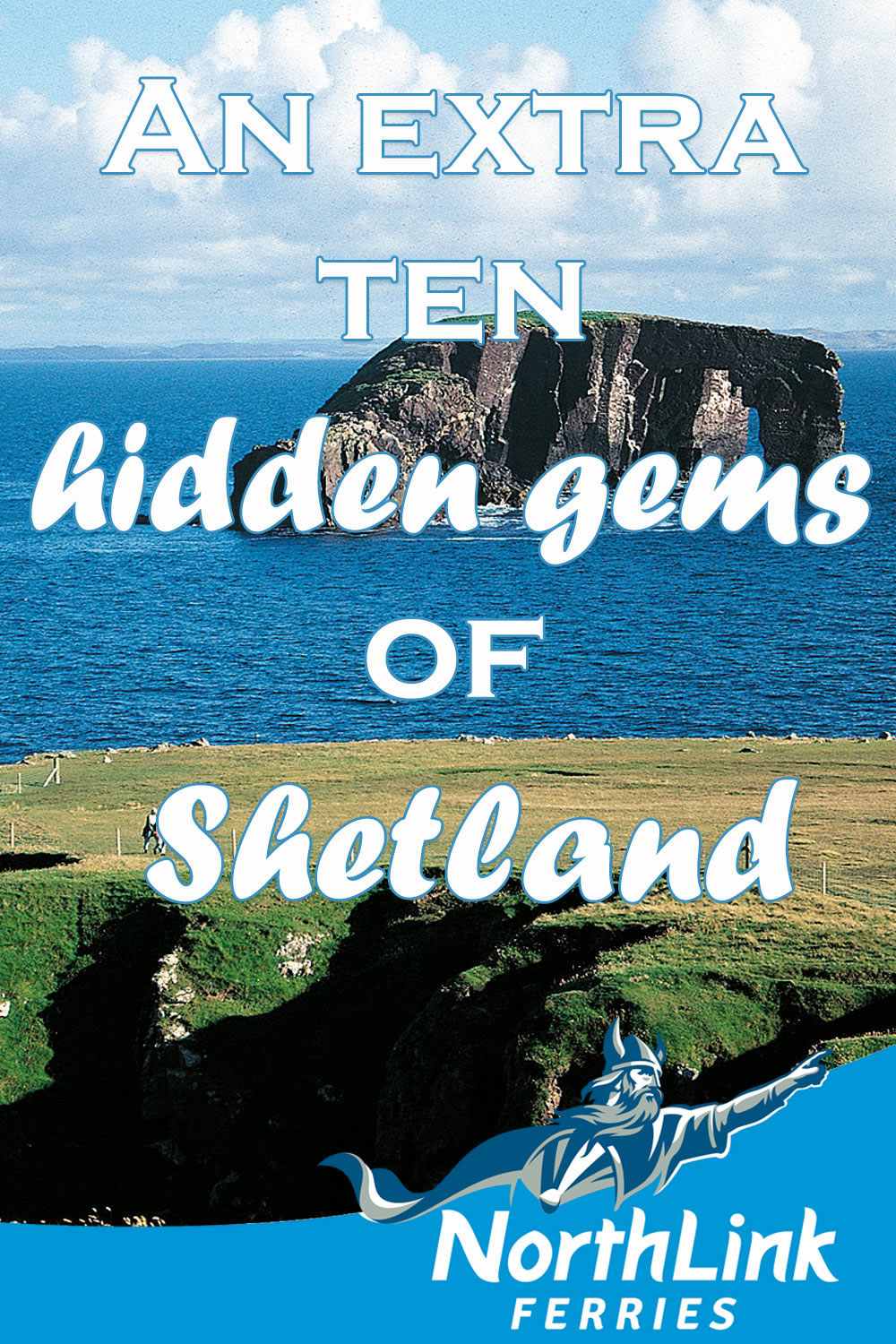